A former Wisconsin county official revealed the details of a phone conversation he claims to have had last month with Republican Wisconsin Sen. Ron Johnson about the 2020 election.

While President Donald Trump’s numerous lawsuits to contest the results have so far gone nowhere, Trump has consistently maintained that the election was “rigged,” and many prominent GOP politicians, including Johnson, have reportedly been hesitant to publicly say that President-elect Joe Biden won the race.

Former Brown County Wisconsin Republican Party chairman Mark Becker described a 30-minute “surreal” phone conversation he purportedly had with the Republican senator on November 14, less than two weeks after the election, in an op-ed published Wednesday on the anti-Trump website The Bulwark.

In the piece, Becker claimed Johnson told him that Biden won the election fairly, but won’t admit it in public because he considers opposing Trump, who Johnson purportedly called an “asshole,” to be “political suicide.” 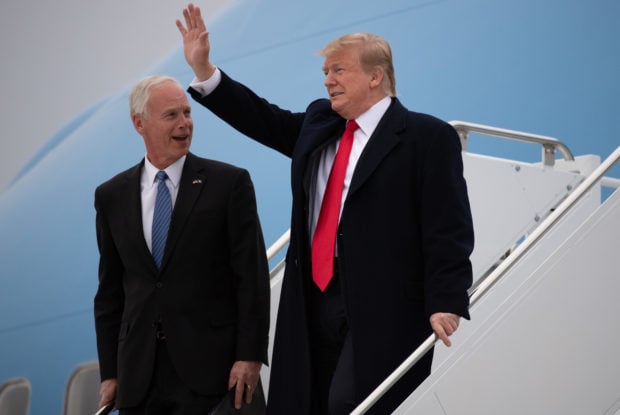 US President Donald Trump (R) waves as he and US Senator Ron Johnson, Republican of Wisconsin, disembark from Air Force One upon arrival at Green Bay Austin Straubel International Airport in Green Bay, Wisconsin, April 27, 2019, as he travels to hold a Make America Great Again rally. (Photo by SAUL LOEB / AFP) (Photo by SAUL LOEB/AFP via Getty Images)

Becker, a former Brown County supervisor who wrote that he supported former Democratic Sen. Russ Feingold against Johnson in 2016 and had this year been featured in a Republican Voters Against Trump advertisement, described Johnson’s position as “unconscionable.”

“Senator Johnson spoke about the massive amounts of people Donald Trump brought into the party, many of whom have never cared about politics before,” he continued. “He said that ‘yes, Donald Trump is an asshole,’ but the votes that Trump received, especially in Wisconsin, cannot be overlooked.”

Becker went on to describe their conversation about the election results:

I said I was both frustrated and gravely concerned about how the GOP is continuing to advance disproved conspiracy theories regarding the integrity of the election. Senator Johnson said that he knew and accepted the fact that Joe Biden had won. I asked why he wouldn’t say so at a moment when Trump was taking a sledgehammer to the very foundation of our democracy. Senator Johnson replied that the institutions of our democracy are strong enough to withstand what is going on.

Despite Johnson’s characterization of Trump as an “asshole,” Becker expressed frustration in the piece at the Wisconsin senator’s defenses of the president and his policies. At one point, Johnson called anti-Trump groups like Republican Voters Against Trump and the Lincoln Project “money-grubbing pieces of shit” who refuse to accept the good things Trump has done. (RELATED: Brad Parscale Explains What He Believes Was Trump’s Biggest Campaign Mistake)

He said that Trump had so many accomplishments but that nobody wants to talk about them because everyone hates his guts. He said that with him, “it’s really about what’s right and what’s wrong,” and in his mind Trump was right on so many things. I asked him that if it truly is about right versus wrong, why doesn’t he call out what Trump does wrong?

His answer: In essence, that it would be political suicide.

Becker called the conversation “incredibly cordial” and a “respectful discussion” despite their disagreements.

Johnson called Becker’s post “a political hit piece” in a statement to the Daily Caller.

“I have been very consistent in both public and private statements that I believe there are way too many irregularities and suspect issues that need to be fully investigated and publicly vetted before a final result is determined and a peaceful transition of power takes place. The article should be viewed as the political hit piece it is, and simply ignored,” the statement said.