While colleges, government agencies and even public schools race to spend money adopting critical race theory, a new report released Monday by the Heritage Foundation concludes its goals are nothing short of “revolutionary.”

“What’s important is changing culture and changing society, and that’s what critical theory sets out to do,” Mike Gonzalez, one of the two authors of the report titled “Critical Race Theory, the New Intolerance, and Its Grip on America.” “It’s an unremitting attack, all out ceaseless criticism of the traditions and norms of the west in order to create a new social reality.”

It has found its way into k-12 schools, with some schools holding mandatory “white privilege” training sessions and “equity” audits to root out racism among faculty. The Trump administration drew national attention to it by issuing a directive banning it in federal agencies after news broke that white men in Sandia National Laboratories, which assesses the United States’ nuclear weapons, were being forced to attend race re-education classes.

It’s critical for Americans to understand WHAT #CriticalRaceTheory really is.

This new backgrounder from @JM_Butcher and @Gundisalvus serves as a resource for anyone seeking to know more—and help spread the word about this racist ideology: https://t.co/hFf33M5a9q pic.twitter.com/hKJgB9JLqt

Gonzalez described to the Daily Caller how critical race theory grew from being a niche field in academia to being a subject taught in school districts, federal agencies and workplaces across the country.

The movement has its roots in the Frankfurt School, where a manifesto was created in 1937 that drew influence from Friedrich Nietzche, Georg Friedrich Hegel and Karl Marx. One of the core tenets of the school of thought was to tear down Western institutions, and it claimed that “traditional theory fetishized knowledge, seeing truth as empirical and universal.”

One of the ways critical race theory seeks to achieve these ends is through identity politics, the report said. By developing identity categories, each group has its own specific claims to victimhood, which “commands attention, respect, and entitlements, seen as compensatory justice.” 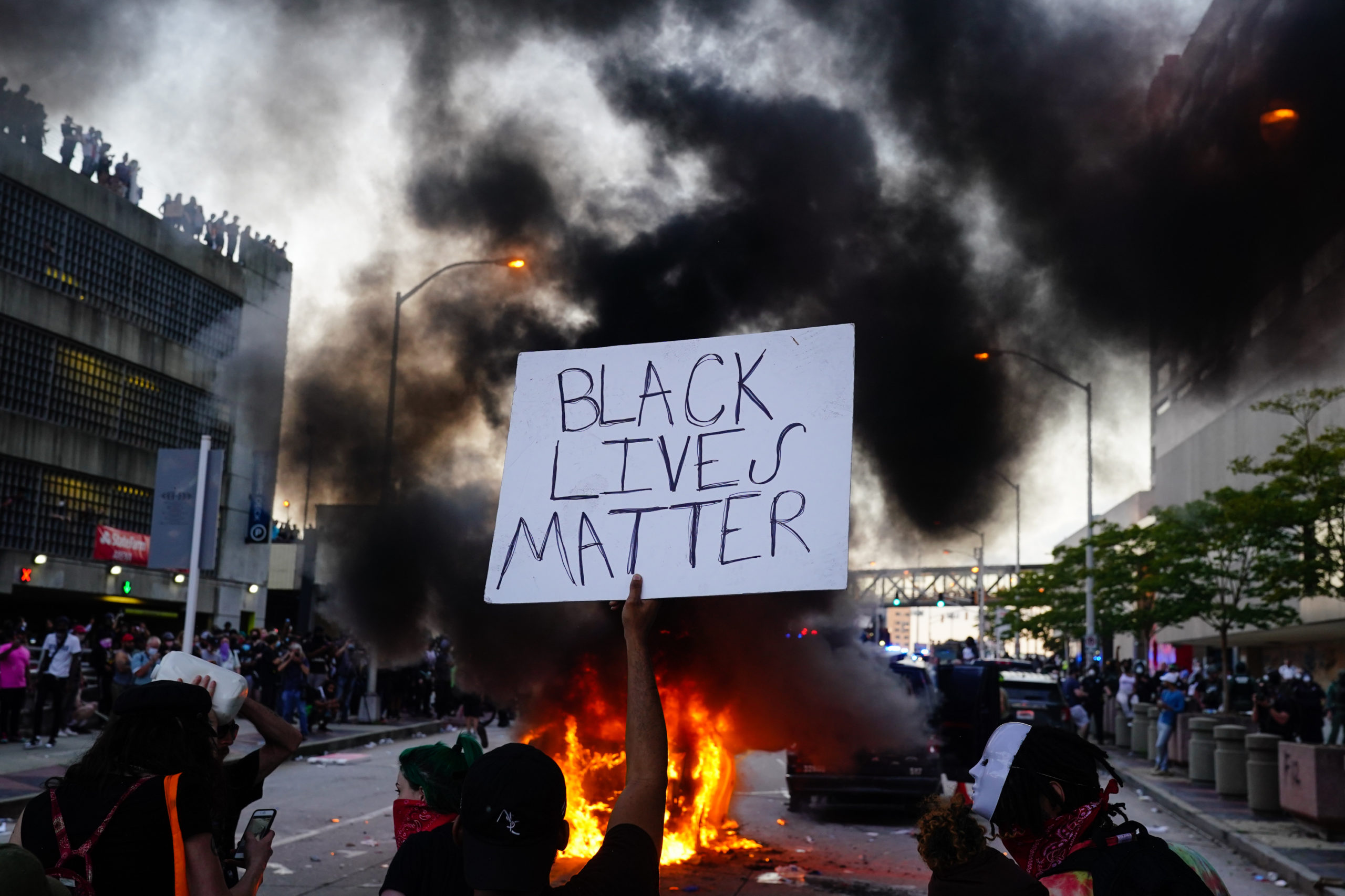 ATLANTA, GA – MAY 29: A man holds a Black Lives Matter sign as a police car burns during a protest on May 29, 2020 in Atlanta, Georgia. Demonstrations are being held across the US after George Floyd died in police custody on May 25th in Minneapolis, Minnesota. (Photo by Elijah Nouvelage/Getty Images)

The rise of the Black Lives Matter movement also suggests that critical race theory has made an impression in popular culture. Its acceptance among the media, corporations and nearly all other power centers demonstrates that the teachings have gone mainstream, according to the report.

#CriticalRaceTheory makes race the prism through which its proponents analyze all aspects of American life—and do so with a degree of persistence that has helped it impact all of American life.

Perhaps the most pernicious result, Gonzalez argued, is the dissemination of critical race theory in K-12 schools.

In December, leaked documents showed that a San Diego public school district was requiring teachers to attend “white privilege” trainings where they were expected to recognize their roles in perpetuating racism, a hallmark of critical race theory.

A slide in the training titled “White Privilege and Culture” informed teachers that “white people in America hold most of the political, institutional, and economic power,” thus benefiting from advantages that non-white people don’t, according to Christopher Rufo, who reported on the leaked documents. (RELATED: ‘You Are Upholding Racist Ideas’: Teachers Reportedly Required To Attend ‘White Privilege’ Training At Public School)

The report mentioned multiple other instances where critical race theory has influenced school decision making, including focusing resources on helping school board members identify their “implicit biases,” an initiative adopted by the Ohio state board of education.

“Curricular content for action civics range from encouraging students to volunteer in their community to suggesting that teachers assign students, even elementary-age students, material that advocates for unionizing workers and protesting against ‘gentrification,’ complex subjects even for adults to consider,” the report said.

Leaked documents have also shown that critical race theory is the backbone of trainings happening at federal agencies. For example, National Laboratories, a federal lab, reportedly hosted a three-day mandatory training for its white male executives where they were instructed to apologize for their privilege, along with other tasks such as acknowledging the connection between “white male culture” and mass killings.

Other leaked documents revealed that the federal agency United States Agency for International Development (USAID) had given manuals to its employees to educate them about topics such as “microaggressions” and “misgendering.”

But what the White House has referred to as critical race theory, others, including a presidential debate moderator, have called “sensitivity training.”

“This is not sensitivity. This is the least sensitive thing there is. This is teaching people that hard work is ‘whitish,’ that linear thinking or love of the written word is a white thing. This is pernicious stuff that should go nowhere near anybody in their right mind.”

“America has faults like every other country but it is a very successful experiment in terms of liberty and prosperity,” Gonzalez said. “Before we change America so structurally, we should ask ourselves, is there really any other society we’d like to become?”