Former Florida state health official Rebekah Jones tweeted a video of police raiding her home on Monday alleging they pointed guns at her and her kids, a detail that the footage doesn’t corroborate, before confiscating her tech hardware. The story quickly went viral with the video being viewed more than 8 million times and her tweet thread receiving more than 120,000 retweets.

“This was DeSantis,” Jones tweeted. “He sent the gestapo.”

“This is what happens to scientists who do their job honestly,” Jones continued. (RELATED: Florida Governor Extends Ban On Local Enforcement Of Mask Mandates, Business Restrictions)

The story was trending on Twitter Monday with over 310,000 tweets sent, according to Trendsmap, and Jones was interviewed on CNN by anchor Chris Cuomo Monday night. She told Cuomo that Republican Florida Gov. Ron DeSantis needs to stop worrying about her and more about the Floridians who are “sick and dying.”

.@RonDeSantisFL will send the cops to your house if you try and keep Floridians safe. #COVID19 https://t.co/3a1pvlKrBL

Every-time I see the video of #RebekahJones and state police in Florida in her home. Guns drawn. Being pointed at her family. It’s outrageous. This is America! Or is it now a 3rd world country and the Governor can send armed men to our homes on a bogus warrant??!! #RonDeSantis

The Florida Department of Law Enforcement (FDLE) contradicted Jones’s account of the police raid in a statement Monday. The department said the raid and search warrant was part of an investigation into a hack into the state’s emergency alert system that could be traced back to Jones’s home.

“Our investigation began last month following a complaint by Florida Department of Health that a person illegally hacked into their emergency alert system,” FDLE Commissioner Rick Swearingen said. “As part of our investigation, FDLE agents served a search warrant this morning at the Centerville Court residence where Ms. Jones lives after determining the home was the location that the unauthorized message was sent from.”

Swearingen added that state police officers repeatedly knocked on Jones’s doors over the course of 20 minutes on Monday morning. She also hung-up on agents when they called her, Swearingen said.

1/
There will be no update today.

At 8:30 am this morning, state police came into my house and took all my hardware and tech.

They were serving a warrant on my computer after DOH filed a complaint.

“After several attempts, Ms. Jones allowed agents inside,” Swearingen said. “Agents entered the home in accordance with normal protocols and seized several devices that will be forensically analyzed. At no time were weapons pointed at anyone in the home.”

An unknown person infiltrated the Department of Health’s (DOH) alert system on Nov. 10 and urged officials on the State Emergency Response Team, which is tasked with handling the state’s public health response, to “speak up before another 17,000 people are dead,” according to The Tampa Bay Times

“You know this is wrong,” the anonymous message said, The Tampa Bay Times reported. “You don’t have to be a part of this. Be a hero. Speak out before it’s too late.”

A spokesperson for the (DOH) called the hack “irresponsible and unlawful,” according to The Tampa Bay Times. The agency notified the FDLE immediately after the hack, the spokesperson said.

Jones denied responsibility for the hack during her interview with Cuomo Monday night.

“I haven’t had access to any systems at DOH for over six months. I’m not a hacker,” Jones, who was Florida’s top data scientist, told Cuomo.

“I’m not that tech savvy. I have no interest in reaching out to DOH,” she added.

Gov. “DeSantis needs to worry less about what I’m writing about and more about the people who are sick and dying… doing this to me will not stop me from reporting the data. Ever.”
– FL data scientist Rebekah Jones on having her home raided as part of a cybercrime investigation. pic.twitter.com/ztbqdKjwYv

The FDLE and Jones did not immediately respond to requests for comment.

In May, Jones was fired for repeated “insubordination,” DeSantis spokesperson Helen Aguirre Ferré told The Miami Herald at the time. Before she was fired, Jones oversaw Florida’s coronavirus dashboard, which tracks new virus cases and death statistics, and had also been critical of the state for its alleged lack of transparency, The Herald reported.

The firing received both local and national attention with the Associated Press, The Guardian, NPR, CBS News and NBC News publishing stories about it. Jones accused DeSantis of firing her for not manipulating data to support the state’s reopening policies, according to Florida Today.

“Amidst pressure to ‘reopen’ the state regardless of data and science, transparency is vital to keeping our neighbors safe and ensuring that they have confidence that our government is reporting honestly,” Democratic Florida Rep. Kathy Castor said in a May statement. “I am requesting immediate answers as to why Ms. Jones was fired and how the State intends to fully report all COVID-19 public health data without censorship by the Department of Health or anyone else.”

But, Ferré told The Herald that Jones made “decisions to modify the department’s COVID-19 dashboard without input or approval from the epidemiological team or her supervisors.” (RELATED: Gov. Phil Murphy Calls Matt Gaetz ‘Matt Putz’ For Allegedly Violating COVID-19 Restrictions At New Jersey Gala)

“Our data is available. Our data is transparent,” DeSantis said in response to questions about the firing, according to NPR. “In fact, Dr. Birx has talked multiple times about how Florida has the absolute best data. So any insinuation otherwise is just typical partisan narrative trying to be spun.” 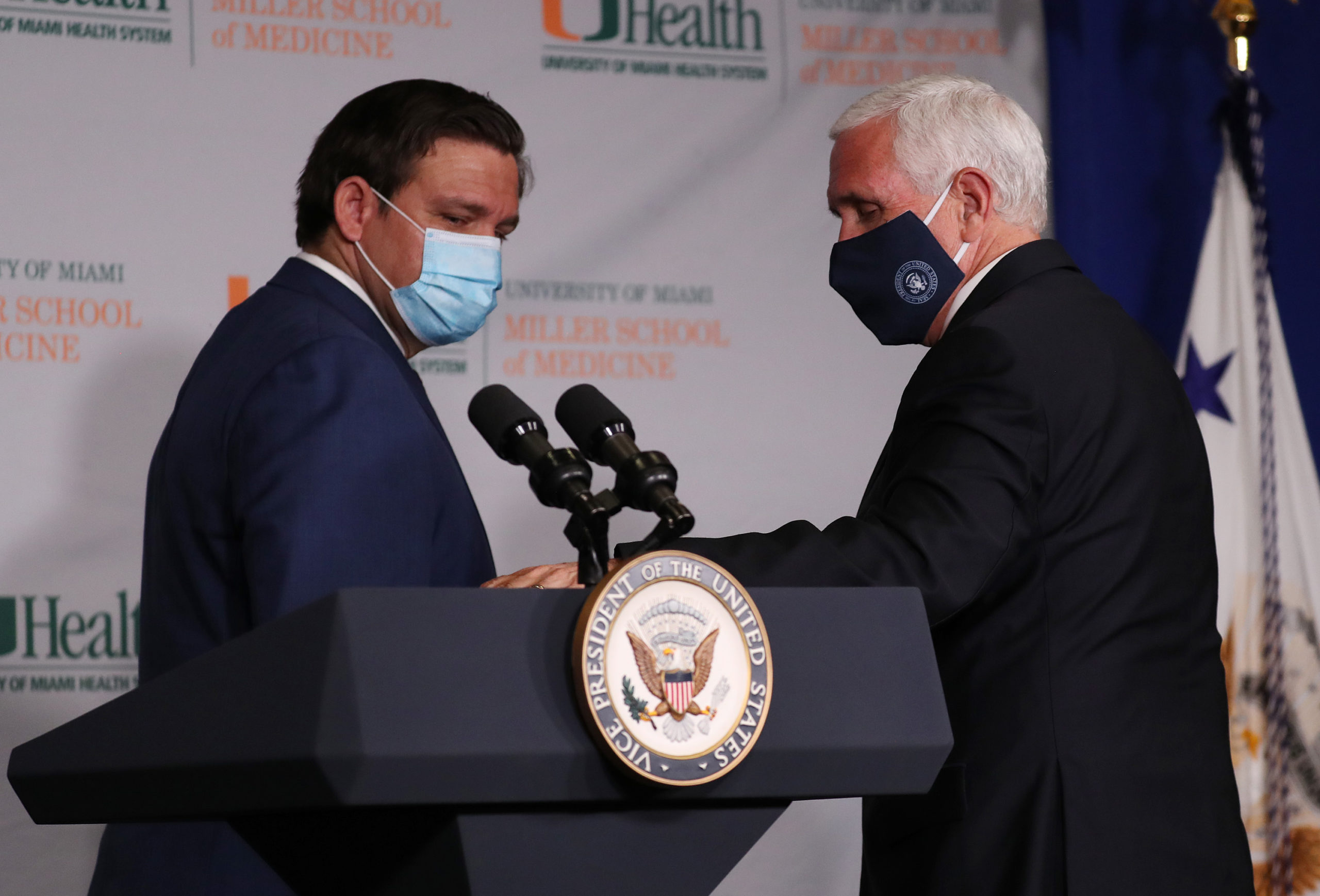 Jones’s accusation that she was fired for not manipulating data concerns a request from her superiors in DOH to temporarily disable the ability for the public to export data so that the agency could verify the data, according to Tallahassee Reports. A single column of coronavirus data was temporarily disabled and unavailable for a day and a half.

In his comments on Jones, DeSantis also criticized DOH for not firing Jones earlier than they did over her pending criminal stalking charges, NPR reported. Florida State University fired Jones in 2017 for having an affair with a student and she was later charged with cyberstalking after the student filed a restraining order, according to Fox News.

“I’ve asked the Department of Health to explain to me how someone would be allowed to be charged with that and continue on because this was many months ago,” DeSantis said, according to NPR.

DeSantis has been criticized for his aggressive reopening policies amid the ongoing coronavirus pandemic, according to Politico. Florida began its phase one reopening on May 18 even as most states remained shut down.

Since the outbreak of coronavirus in the spring, Florida has reported roughly 1.1 million cases and 19,281 deaths as of Tuesday, according to The New York Times.