Limbaugh made the comments on his Wednesday radio show while responding to a question from a listener about whether it’s possible for conservatives to win national elections at this point given that overwhelming numbers of Democratic voters in large cities have increasingly delivered states to Democrats.

“I actually think — and I’ve referenced this, I’ve alluded to this a couple of times cause I’ve seen others allude to this — I actually think that we’re trending toward secession,” Limbaugh said. “I see more and more people asking what in the world do we have in common with the people who live in, say, New York? What is there that makes us believe that there is enough of us there to even have a chance at winning New York, especially if you’re talking about votes.” 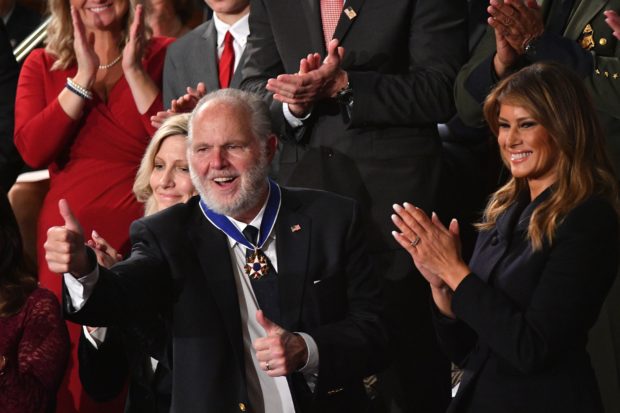 Radio personality Rush Limbaugh pumps thumb after being awarded the Medal of Freedom by First Lady Melania Trump after being acknowledged by US President Donald Trump as he delivers the State of the Union address at the US Capitol in Washington, DC, on February 4, 2020. (MANDEL NGAN/AFP via Getty Images)

“There cannot be a peaceful coexistence of two completely different theories of life, theories of government, theories of how we manage our affairs,” he continued. “We can’t be in this dire of a conflict without something giving somewhere along the way. I know that there’s a sizable and growing sentiment for people who believe that that is where we’re headed whether we want to or not.”

Limbaugh, who recently received the Presidential Medal of Freedom from President Donald Trump, noted that he still hasn’t made up his own mind on the issue.

“I still haven’t given up the idea that we are the majority and that all we have to do is find a way to unite and win,” he said. (RELATED: Is A New Secession Movement Growing In America? F.H. Buckley Argues That It Is In New Book)

While Limbaugh’s comments drew plenty of criticism and had the radio show host trending on Twitter, talk of secession is by no means relegated to the right. Four years ago, the so-called “Calexit” movement made news as some Californians argued that the state should leave the union in the wake of Trump’s victory.