Correction: An earlier version of this story reported that the committee was renaming the school because Lincoln “never showed” black lives mattered. The actual proposal refers only to Native Americans, omitting black people because the committee did not want to “belabor the point,” Chairman Jeremiah Jeffries said.

The San Francisco United School District’s School Names Advisory Committee chairman said that Abraham Lincoln “did not show through policy or rhetoric that Black lives ever mattered,” according to San Francisco Chronicle.

Lincoln is among dozens of figures who the school district renaming committee argues led a life filled with racism and therefore shouldn’t be on a school building, according to the San Francisco Chronicle.

The committee’s spreadsheet indicates that Lincoln’s treatment of Native Americans during his administration met the criteria to rename a school after him.

“The discussion for Lincoln centered around his treatment of First Nation peoples, because that was offered first,” chairman of the renaming committee and a first grade teacher Jeremiah Jeffries said, according to the report. “Once he met the criteria in that way, we did not belabor the point.”

“The history of Lincoln and Native Americans is complicated, not nearly as well known as that of the Civil War and slavery,” he said, according to the San Francisco Chronicle. “Lincoln, like the presidents before him and most after, did not show through policy or rhetoric that Black lives ever mattered to them outside of human capital and as casualties of wealth building.”

“Uprooting the problematic names and symbols that currently clutter buildings, streets, throughout the city is a worthy endeavor,” he noted, according to the report. “Only good can come from the public being reflective and intentional about the power of our words, names and rhetoric within our public institutions.” 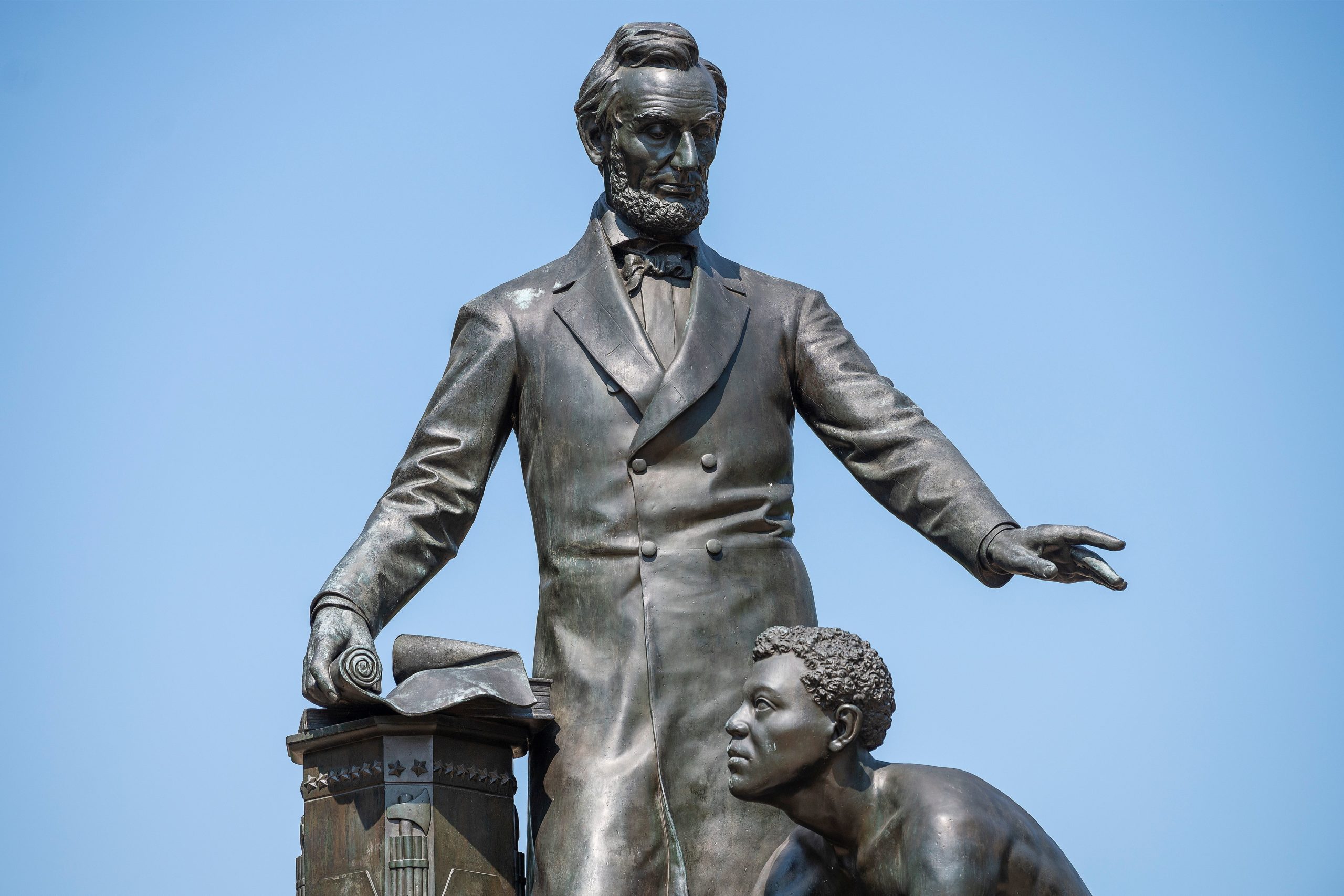 The Lincoln Park ‘Emancipation’ statue, a statue that is among monuments drawing scrutiny that depicts former US President Abraham Lincoln standing over a kneeling freed Africans American man, is seen in Washington, DC, on June 22, 2020. (Photo by JIM WATSON / AFP) (Photo by JIM WATSON/AFP via Getty Images)

Lincoln issued the Emancipation Proclamation, which declared that slaves held in the Confederate states were free, in 1862 and campaigned for the ratification of the 13th Amendment, which ended slavery in 1865. (RELATED: ‘You Are Upholding Racist Ideas’: Teachers Reportedly Required To Attend ‘White Privilege’ Training At Public School)

Some note that judging a historical figure from the past under current conditions subjects them to what is known as “outcome bias,” according to Andrew Delbanco, professor of American Studies at Columbia University.

“It is to wrench them out of the context of their times,” Delbanco wrote in his book “The War Before The War” while referring to modern-day learners who review the actions of those involved in the Civil War in a modern context.

The committee has sought to rename dozens of schools, with critics saying that the process for doing so, which apparently uses Wikipedia citations or selective news sources rather than a historical records or comprehensive research approach, is amateur and a waste of money, the San Francisco Chronicle reports.

Others on the list include George Washington High School, named after the nation’s first president who led colonists to victory during the Revolutionary War, according to the San Francisco Chronicle. Washington has been targeted for being a “slaveowner, colonizer” according to the committee’s spreadsheet.

Jefferson Elementary is also on the list, despite Thomas Jefferson’s authorship of the Declaration of Independence.

Not all community members are on board for the changes though. Jonathon Alloy, whose children attend one of the schools on the renaming list, said changing the names is a waste of resources, according to the San Francisco Chronicle.

“Principals are devoting resources to this,” he said. “We’re being presented with it as a fait accompli.”

Officials from five high school alumni associations criticized the board and said they needed to consult professional historians, according to the report.

“We need an inclusive process that will allow all communities to be heard, use professional historians applying verifiable data, issue a written report why a school name might be changed, so the community can make a considered decision.”