Former national security adviser Susan Rice said in 1998 that laying responsibility for slavery is “largely irrelevant” and noted that there were “both buyers and sellers” in Africa who participated in the slave trade.

Rice, who president-elect Biden has chosen to lead the White House Domestic Policy Council, defended former President Bill Clinton’s apology for slavery made in 1998 in a village outside the Ugandan capital. Clinton’s speech had sparked anxieties among his staff who feared that the speech would trigger a backlash in the United States, the Washington Post reported at the time.

“Going back to the time before we were even a nation, European Americans received the fruits of the slave trade,” Clinton said, according to WaPo. “And we were wrong in that.”

The former president added: “In our own time, during the Cold War, when we were so concerned about being in competition with the Soviet Union, very often we dealt with countries in Africa and other parts of the world based more on how they stood in the struggle between the United States and the Soviet Union than how they stood in the struggle for their own people’s aspirations to live up to the fullest of their God-given abilities.”

Rice, who served as U.S. Assistant Secretary of State for African Affairs from 1997 to 2001, discussed the president’s remarks during a March 24, 1998 press conference. (RELATED: Georgia Pastor Refers To Black RNC Speakers As ‘Slaves’) 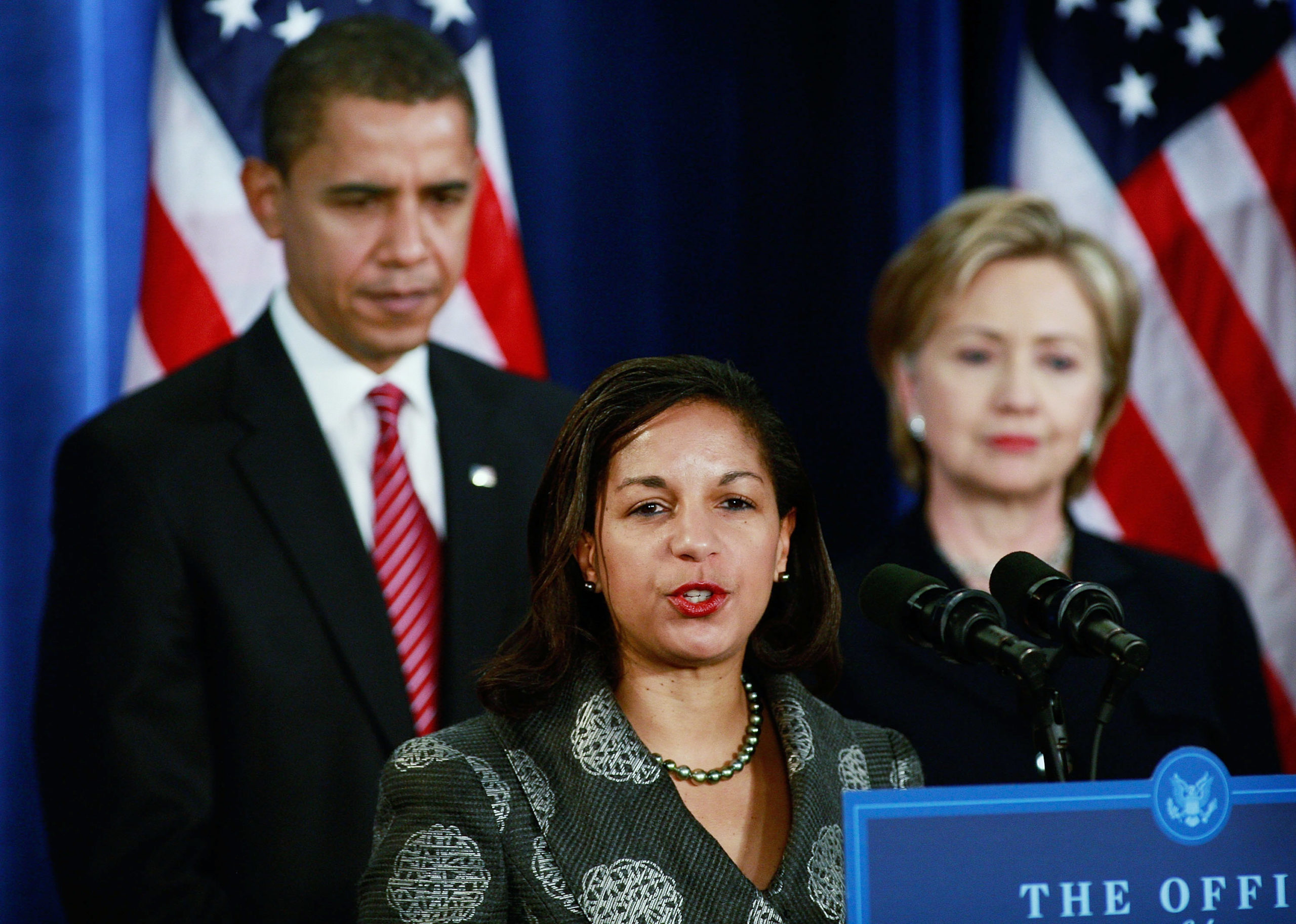 CHICAGO – DECEMBER 01: Susan Rice (C), Obama’s choice for U.N.ambassador, as President-elect Barack Obama (L) and Senator Hillary Clinton (D-NY), who has been selected for secretary of state, listen during a press conference at the Hilton Hotel December 01, 2008 in Chicago, Illinois. (Photo by Scott Olson/Getty Images)

“You asked a question of Reverend Jackson, how do you feel — or how did you feel hearing the comments of the President or experiencing the slave castles as an African American,” she continued. “Let me just speak for myself — I felt, one, a sense of reverence and a sense of history, but far more interested in the future. What is going to be the fate of my 8-month-old son, what is going to be the fate of the young children we saw today in Jinja — that’s what’s relevant.”

“So I hope that we can increasingly stop talking about slaver(y), which is, frankly, largely irrelevant to most of us here today,” she said, “and talk about how we can overcome our history, both positive and negative, in a fashion that builds a brighter future for Americans and Africans alike.”

Rice had previously said that there were both “buyers and sellers” in Africa who participated in the slave trade, the Post reported, and emphasized during the press conference that she stood by these remarks.

“I stand by my statement,” she told a reporter during the 1998 White House Press Briefing. “There were buyers and sellers. That’s a historical fact. That’s not to cast blame.”

She continued: “That’s simply to say that the past is past, and buyers and sellers are now on both sides of the Atlantic and it’s our task together to build a brighter future. We can spend the rest of this trip and the rest of our time while we’re in government talking about the past, or we can seize an opportunity and build a better future for American young people and African young people. To me, that’s a no-brainer.”

Rice did not immediately respond to a request for comment from the Daily Caller News Foundation sent through the Biden transition team.

Biden and his fellow Democrats have repeatedly promised to “study” how to pay reparations to the black community for the devastating effects of slavery in American history.

“Joe Biden knows that African Americans can never have a fair shot at the American Dream so long as entrenched disparities are allowed to quietly chip away at opportunity,” Biden’s “Plan for Black America” states. “He is running for President to rebuild our economy in a way that finally brings everyone along—and that starts by rooting out systemic racism from our laws, our policies, our institutions, and our hearts.”

“As Biden has said in this campaign, a Biden Administration will support a study of reparations,” the plan said. “Biden will begin on day one of his Administration to address the systemic racism that persists across our institutions today. That’s why he developed education, climate change, and health care policies, among others, that will root out this systemic racism and ensure that all Americans have a fair shot at living the American dream. “