The suit was filed against multiple individuals and an organization called Detroit Will Breathe, which indicates on its webpage that it plans to use “militant resistance” to enact “meaningful change” for people of color. City leaders allege that the group was part of a conspiracy to damage property, attack law enforcement and incite riot activity, the lawsuit read.

“Counter-Defendants illegally, maliciously, and wrongfully conspired with one another with the intent to and for the illegal purpose of disturbing the peace, engaging in disorderly conduct, inciting riots, destroying public property, resisting or obstructing officers in charge of duty, and committing acts of violence against Counter-Plaintiffs and DPD officers,” the legal document read.

“While Counter-Defendants have attempted to characterize their protests as ‘peaceful,’ the protests in Detroit have repeatedly turned violent, endangering the lives of police and the public,” the lawsuit continued.

Detroit added that the defendants caused “physical injuries,” “suffering and emotional distress,” and “loss of business opportunity.” In one example, the city pointed to Detroit Will Breathe sharing a video of a demonstrator saying “non-violence is no longer their shield or their answer” as he told a crowd to take police “badges and teeth,” the lawsuit read. 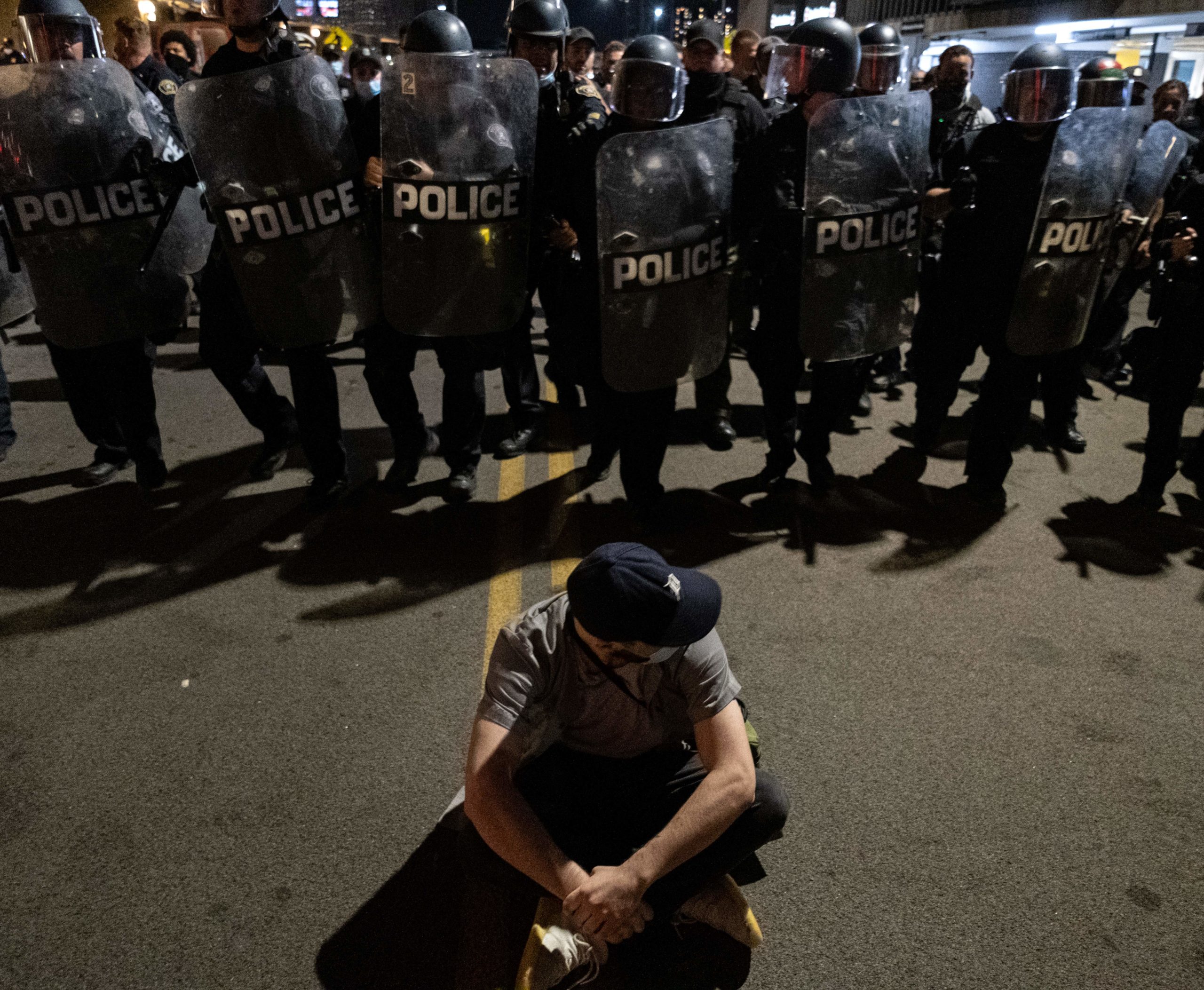 A protester kneels with his back to the US riot police in the city of Detroit, Michigan, on May 29, 2020, over the death of George Floyd, a black man who died after a white policeman knelt on his neck for several minutes. (SETH HERALD/AFP via Getty Images)

Another subject of the suit, Nakia Wallace, said, “I don’t think there’s a space for Detroit to…not condone violence, right?” in an interview with Fox 2 during the unrest, according to the legal document.

The city’s lawsuit follows a complaint from Detroit Will Breathe that alleged that law enforcement engaged in “unnecessary, unreasonable, and excessive force, [and] have repeatedly responded with violence and brutality.”

In late August, 44 demonstrators were arrested following a standoff with law enforcement that saw tear gas deployment after police issued multiple warnings to disperse, according to Click On Detroit.

“Every day, there is a movement in every corner of the country to declare that not only do Black lives matter, but that we must also create the laws and opportunities necessary to fulfill the full promise of that rallying cry,” Tlaib wrote. “In the country’s largest majority-Black city, this movement should not be met with city leaders’ efforts to suppress anyone’s First Amendment rights.”