In a since-deleted social media post on Parler, Stone posted a photograph of himself with President Trump, Kimberly Guilfoyle, and Christopher Ruddy, the CEO of Newsmax, according to a report by the Sun Sentinel. Stone reportedly wrote that he thanked the president for pardoning him and encouraged him to hire a special counsel to investigate claims of voter fraud. 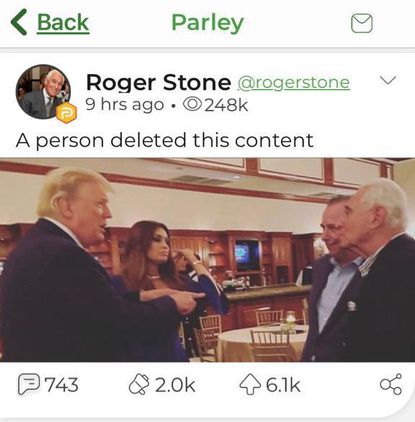 Screenshot of Stone’s deleted Parler post from the Sun Sentinel

“I thanked President Trump in person tonight for pardoning me,” he wrote, according to the Sun Sentinel. “I also told the president exactly how he can appoint a special counsel with full subpoena power to ensure that those who are attempting to steal the 2020 election through voter fraud are charged and convicted and to ensure that Donald Trump continues as our president.”

Stone reportedly told the Sun Sentinel that he deleted the post after the golf club informed him that they had “a policy of prohibiting photos of club members or guests out of respect for their privacy.”

Stone also expressed his gratitude to President Trump for the pardon Wednesday night in an interview on Tucker Carlson Tonight. (RELATED: ‘This Is Rotten To Its Core’: Ben Sasse Flames Trump Over Latest Round Of Pardons)

Stone was sentenced to 40 months in prison in February on charges of obstructing a congressional investigation and tampering with a witness. Trump had indicated his possible support for a pardon of Stone in June. Trump commuted Stone’s prison sentence on July 10 and gave him a full pardon on Dec. 23.

Roger Stone joins a list of other Trump allies who have received pardons from the president, including Paul Manafort, Charles Kushner, and Michael Flynn.