In American shotgun lore, the 16 gauge still possesses the sweet fragrance of nostalgia when, back in the day, upland hunting with a hardware store gun carried on the open range or along fence rows with your favorite dog produced explosive coveys.

Some of our favorite shotgun makers have, for years, been capitalizing on the feel-good 16-gauge niche by dribbling out semi-autos, over/unders and side by sides in sufficient quantities to give any owner the panache of a pastoral old-timer trundling through the shadows of a golden age. And as the 16-gauge segment percolated with new models, shotshell companies have focused on their own innovation ascending to state-of-the-art duck and upland loads.

About five years ago I bought a new Browning 16-gauge BPS pump that I’ve shot three times, but just can’t bring myself to part with it when rearranging the gun safe to manage space for one more shotgun. I keep telling myself, “you have to own at least one 16 gauge.” 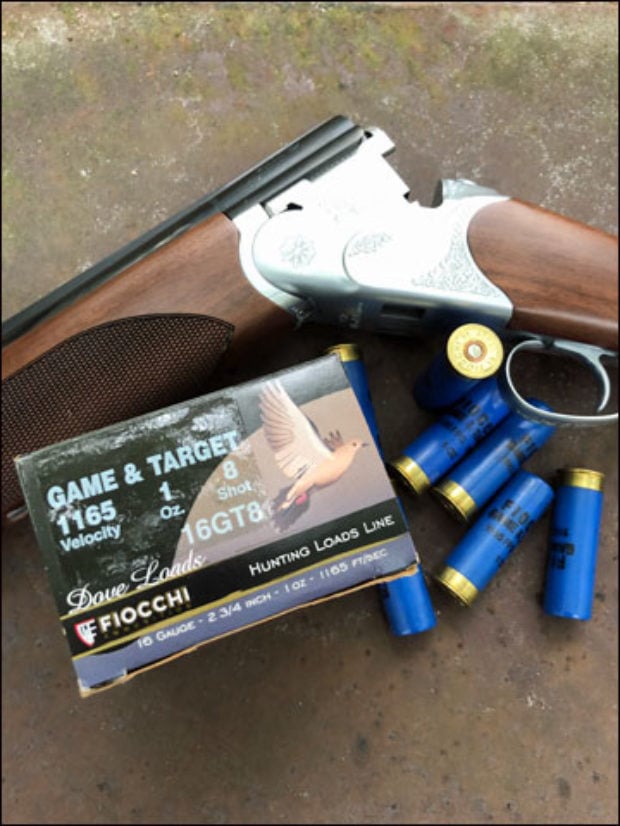 The essence of upland hunting with the CZ 16-gauge Redhead Premier and a box of dove loads.
–

So personally, it was great news when CZ-USA announced in June 2020 a 16-gauge Redhead Premier over/under. The 16 gauge joined its 12- and 20-gauge stablemates, which all share a $988.00 list price. The big difference is that while the 12- and 20-gauge ship with five flush chokes, the 16-gauge choke constrictions are fixed at improved cylinder/modified on the 28-inch barrels.

Dave Miller, the Shotgun Product & Event Manager at CZ-USA, said the new16 gauge came to market because “We had many requests for a 16-gauge over/under, which I find so surprising. It’s a niche market, but if we can sell a few shotguns and make customers happy, hey, we are going to do it.”

In discussing the 16 gauge with Dave, he mentioned actually wanting the new CZ Redhead Premier to also ship with screw-in chokes “but the demand just isn’t high enough to warrant the development.”

I countered that fixed constrictions on a 16 gauge in particular gave the shotgun greater authenticity if you’re the kind of person (like me) who consigns it to the heyday of American wingshooting before we became entangled in a morass of government red tape. 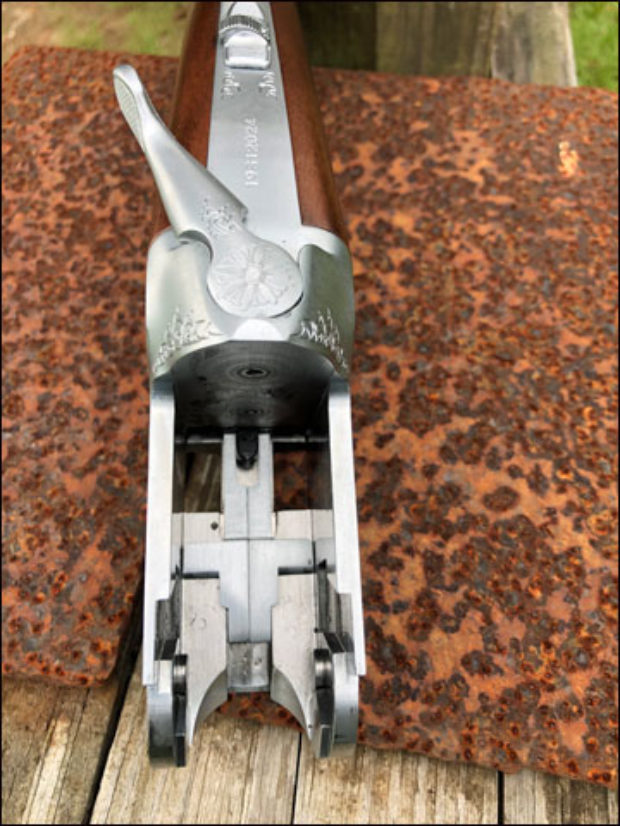 Since the shotguns are manufactured in Turkey by Huglu, the walnut is generally a cut above for the price point, and the 14½ length of pull, perhaps a ¼-inch shorter than other comparables, seems to take into account shooting with a jacket or vest. The slender field-style forend felt comfortable. Naturally, the checkering is done by laser. We liked the hard plastic on the top point of the recoil pad that helped prevent clothing snags.

We found tight fits around wood-to-metal seams – evidence of a high level of robotic automation at Huglu.

The 28-inch barrels sport an 8mm flat vented rib topped by a single front bead. The chambers are 2¾ inches. The Redhead Premier 16 gauge is built on the 12-gauge frame, contributing to its hefty eight-pound weight that may deter some hunters from carrying it all day. As a hunting preserve or clays gun, though, we discovered that the eight pounds muffled felt recoil on the sporting clays course. A real plus for the money is a mechanical trigger that ensures a unfailing second shot. The barrel selector on the top strap adds flexibility to the fixed choke set-up. An underlug and two lumps that protrude through the receiver floor combined for a solid lock-up. 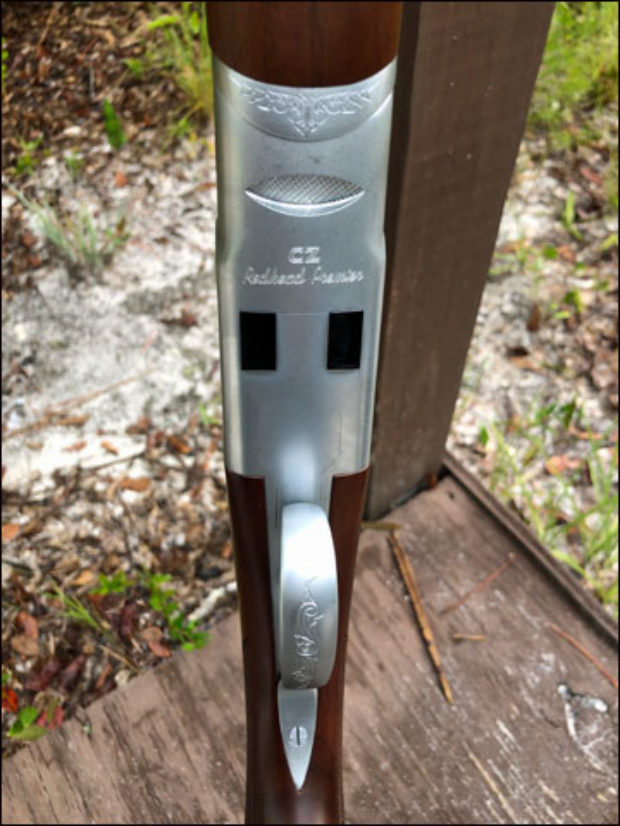 You can see the tight wood-to-metal fit here along with the black locking lumps through the floor of the receiver.
–

We took the CZ Redhead Premier 16 gauge to Southwind Sporting Clays in Quitman, Georgia –bringing several boxes of Fiocchi Dove Loads with one-ounce of #8 shot and a rated velocity of 1165 fps.

Early in the course we encountered a station with a fast, quartering rabbit followed by an equally fast long crosser. By now, we had mastered the front bias you can generally expect from over/unders in the price range, and managed to smash both targets as singles and a report pair.

A later station threw a high, incoming following pair. The CZ Redhead Premier 16 gauge moved smoothly to the targets for another couple of Xs.

From there, we soon found ourselves at a station that presented a high outgoer and low crosser. With a level change like that in a true pair, control is everything, and this is where the eight pounds and front-of-trunnion balance delivered a deliberate back-to-back swing that helped avert over-correction.

By the time we opened the second box of shells, the new shotgun felt easier to open and the notchy trigger gave way to a bit of creep. 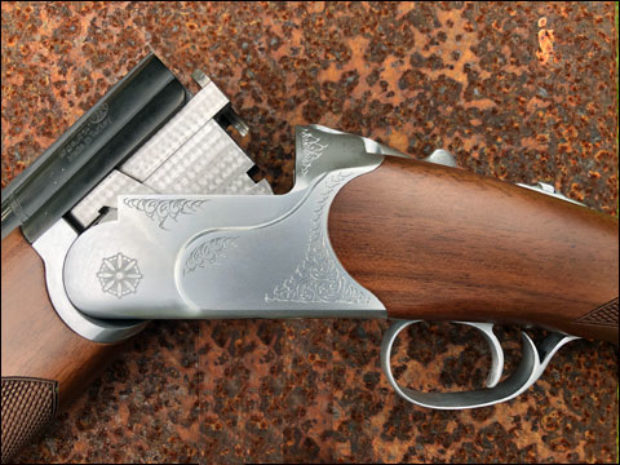 The CZ 16-gauge Redhead Premier had lovely lines and a very high-quality finish.
–

This is when we encountered a pair of very long outgoers that demanded fast shooting, and the 16-gauge CZ Redhead Premier obliged with two broken targets.

Later in the course, at a long quartering right-to-left incomer, I disregarded a cardinal rule by riding the shotgun in my face as long as possible instead of holding in the ready position until I was ready to shoot. My gaffe did offer a solid opportunity to see that the shotgun presented a good sight picture, and despite my unorthodox form the target broke at the extreme left of its trajectory, really way to close to the ground. So even when you fall in love with the target, the 16-gauge CZ Redhead Premier can turn you into a hero.

After opening the third box of shells, I realized that in fact the trigger creep had diminished somewhat as we came up on a very long crossing target of about 50 yards that I successfully shot using the pull-away method – underscoring the shotgun’s stability, accuracy and trigger response.

Ultimately, for its $988.00 list price, you’d be hard pressed to find a better way to fly your 16-gauge flag than with the CZ Redhead Premier.

Irwin Greenstein is the publisher of Shotgun life. You can reach him at contact@shotgunlife.com.