An Indian state has passed a law to ban all Islamic schools and convert them into regular schools, drawing criticism that the move aims to suppress Muslims in the Hindu-majority country, numerous sources reported.

Assam, India will be converting more than 700 madrasas — government-run Islamic schools — into general education schools by April. The state is run by Prime Minister Narendra Modi’s Hindu nationalist Bharatiya Janata Party (BJP), which has been at the center of ongoing tensions between India’s Muslims and Hindus.

The schools are being closed because they provide sub-standard education compared to regular schools, and do not address “the temporal world and its earthly concerns” in their curriculum, according to the government. Madrasas include education focused on the Quran, Islamic law and subjects offered in most schools, like math and science. Once the schools are converted, they will no longer be able to teach students the Quran.

Glad that the Bill pertaining to repeal of Provincialisation of Madrassas has been passed, even as @INCAssam and @AIUDFOfficial expectedly staged a walkout in Assembly. All Madrassas, being run under government stands converted into regular educational institute wef April 1, 2021

”We need more doctors, police officers, bureaucrats, and teachers, from the minority Muslim community rather than Imams for mosques,” he said.

Sarma framed the bill as a boon to the Muslim community, since he said it would afford a “right to equal education for all children and eases the path to higher education.”

Madrasas used to spread literacy across the globe in the Middle Ages when fewer than 5% of the West’s inhabitants could read or write, but as economies modernized the socioeconomic mobility of students enrolled in madrasas suffered.

Opposition criticized the bill as reflective of the government’s anti-Muslim attitude, and the party All India United Democratic Front (AIUDF) walked out of the assembly after demands for consultations on the bill were rejected.  “The idea is to wipe out Muslims,” opposition lawmaker Wajed Ali Choudhury reportedly said.  (RELATED: Brand Pulls Ad Featuring Muslim Man And Hindu Wife After Complaints Of ‘Love Jihad’)

“It is a polarization tactic,” Debabrata Saikia, another opposition lawmaker, said in remarks reported by CNN. “(The BJP) is trying to do it in an official capacity. There is no such need for a law.” 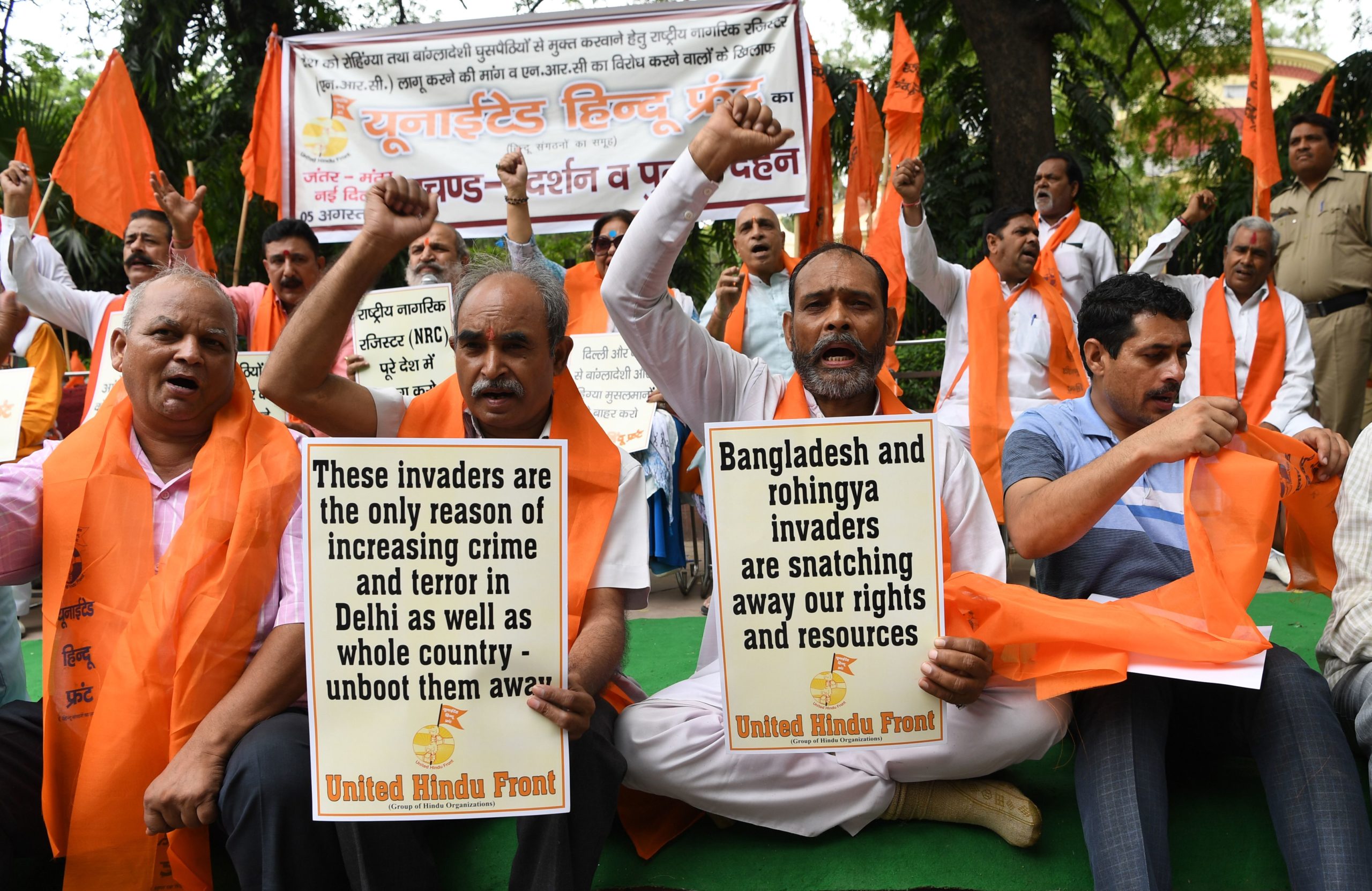 Members of United Hindu front (UHF) participate in a protest to demand the deportation of Bangladeshi and Rohingya Muslims, in New Delhi on August 5, 2018. (SAJJAD HUSSAIN/AFP via Getty Images)

A month prior, the state of Uttar Pradesh passed legislation that punishes anyone found guilty of unlawful religious conversions, which was criticized as a BJP-aligned effort to target Muslims. Hindu hard-line groups have accused Muslims of taking over India by converting Hindu women to marry them and convert to Islam.