Jan. 6 won’t be the first time partisan lawmakers alleged that a wide conspiracy should nullify the results of a presidential election.

As Americans witnessed in 2017, such challenges also have the effect of weakening American trust in institutions. Two out of three Democrats, for example, believed Russia actually changed vote tallies despite no credible evidence, according to a 2018 poll from YouGov. Similarly, Trump’s crusade has led nearly 80 percent of Republicans to believe the election was stolen.

Just this week, Republican Missouri Sen. Josh Hawley set off a flurry of criticism when he announced Wednesday his intent to object to the Electoral College certification Jan. 6. Hawley cited suppression from big-tech platforms as interference in the election along with election laws in Pennsylvania.

Hawley’s objection isn’t quite on the same level that we’ve seen from elements of the #stopthesteal movement, namely that somehow George Soros teamed up with Venezuela to rig voting machines (another election anxiety with a long history).

Still, the sentiment recalls liberal efforts in January 2017 to cast poorly made Russian memes on Facebook and mean emails about Chelsea Clinton as the deciders of 2016’s election, rather than the plurality of Americans who voted for Trump over Hillary Clinton. (RELATED: Podesta: Calling Chelsea ‘Not Smart’ Would Be ‘Understatement’)

America saw a situation similar to Hawley’s Pennsylvania contention in 2005, when a group of Democrats objected to counting Ohio’s 20 electoral votes after insisting Ohio’s election was riddled with widespread “irregularities” that favored former President George W. Bush, according to CNN.

Joined by Democratic California Sen. Barbara Boxer, objectors, including Ohio Rep. Stephanie Tubbs Jones, said that a report by Democrats on the House Judiciary Committee found “numerous, serious election irregularities” in Ohio that led to “a significant disenfranchisement of voters,” according to CNN.

“How can we possibly tell millions of Americans who registered to vote, who came to the polls in record numbers, particularly our young people … to simply get over it and move in,” Tubbs Jones said at a press conference with Boxer, according to the report.

In order for a formal objection to be considered, a member of both the House and the Senate must question a state’s electoral votes in writing, according to The New York Times (NYT).

As required by the rules, lawmakers were sent back to their chambers for two hours to debate the challenge and vote on it, CNN reported. Ultimately Ohio’s electoral votes were awarded to Bush.

Bush’s 2001 highly contested win in the Supreme Court also led to attempts to object to the certification of electoral votes.

The 2000 election was overshadowed by conspiracies, including one that then-Governor of Florida Jeb Bush threw the election to his brother.

During the 36-day recount period, the governor’s office made 95 phone calls to Bush’s presidential campaign, according to the Des Moines Register. While the governor was said to have recused himself “from any involvement in what happened after Nov.7, he did not recuse himself from his role as a brother,” Bush’s communications director Katie Baur said, according to the report. It’s unclear what his “role as a brother” entailed.

There were also questions over whether then-Florida Secretary of State Katherine Harris presented a conflict of interest since she was also a co-chair on the Bush campaign, according to the report. 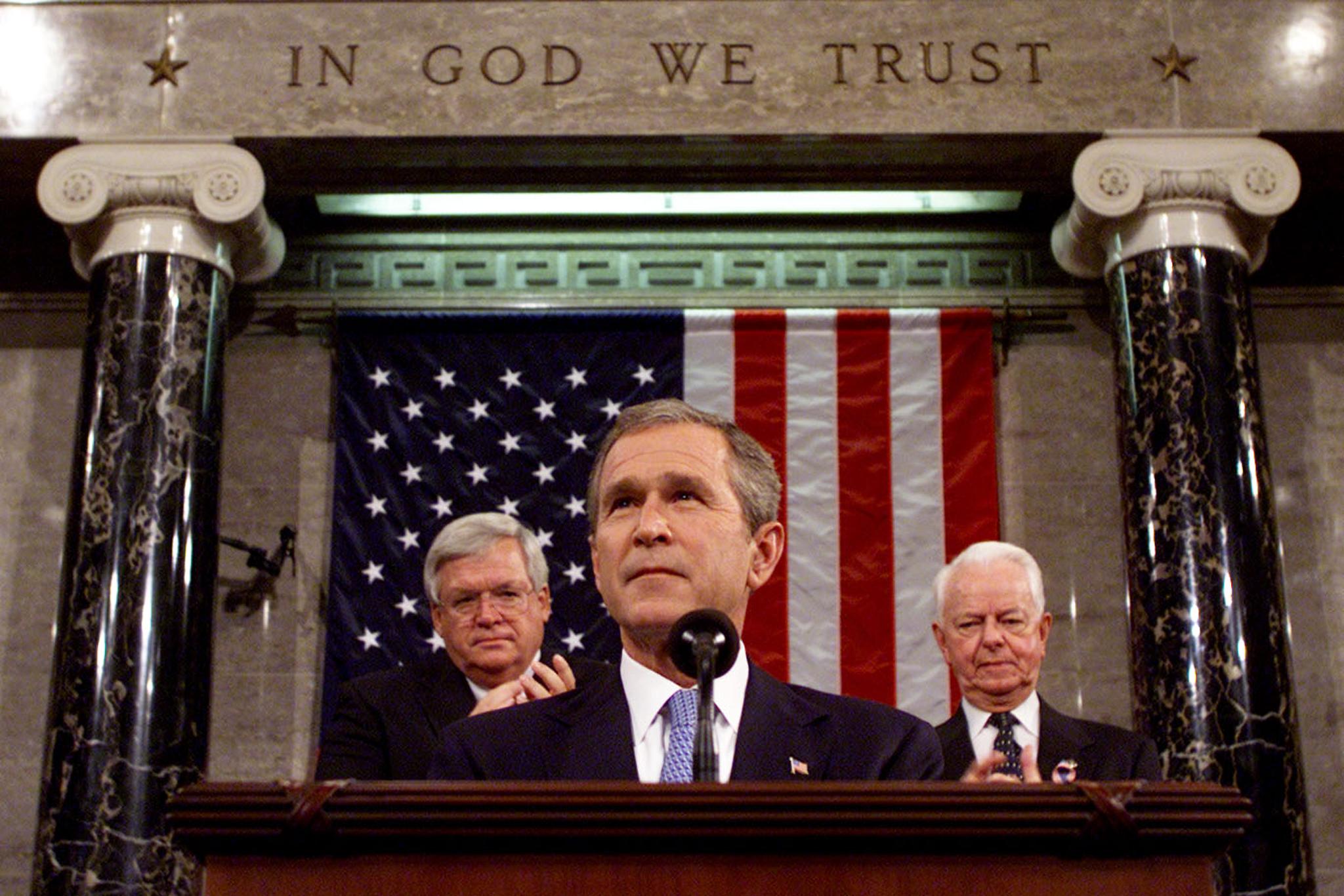 WASHINGTON, DC – SEPTEMBER 20: US President George W Bush, with Speaker of the House Dennis Hastert(R-IL) and Robert Byrd(R-WV), addresses a Joint Session of Congress, 20 September 2001 in the House Chamber in the US Capitol in Washington, DC. (WIN MCNAMEE/AFP via Getty Images)

A dozen members of the Congressional Black Caucus, along with a few other representatives, tried to block the counting of Florida’s electoral votes, arguing black voters had been disenfranchised, according to the NYT. Democratic Illinois Rep. Jesse L. Jackson Jr. said it was a “sad day in America” after no senator signed the objection, which is required in order for a vote on the matter to occur.

Democratic Florida Rep. Alcee L. Hastings also attempted to object, saying there was “overwhelming evidence of official misconduct” before then-Vice President Al Gore silenced him from speaking because he lacked support from a senator, according to the report.

Hawley’s recent announcement that he would be objecting to the certification of results is the latest attempt to overturn the results of the 2020 election by Republicans and has received criticism from both Republicans and Democrats.

This is how you run for President on the Republican side in 2024. You join a coup attempt.

Democracy will prevail. As lead Dem on Rules Com. I will guarantee it. There’s a bipartisan group of electeds who will put our country first. See you on the 6th! https://t.co/jDkGVi4vDw

“All the clever arguments and rhetorical gymnastics in the world won’t change the fact that this January 6th effort is designed to disenfranchise millions of Americans simply because they voted for someone in a different party,” Sasse wrote. “We ought to be better than that.”

Republican Alabama Rep. Mo Brooks and a handful of other House Republicans are planning on objecting the electoral votes, meaning a vote on the issue is likely, according to The Hill.

“I cannot vote to certify the electoral college results on January 6 without raising the fact that some states, particularly Pennsylvania, failed to follow their own state election laws,” Hawley said in a statement. “And I cannot vote to certify without pointing out the unprecedented effort of mega corporations, including Facebook and Twitter, to interfere in this election, in support of Joe Biden.”

Democratic Massachusetts Rep. Jim McGovern objected to the certification of Alabama’s votes, arguing “the electors were not lawfully certified, especially given the confirmed and illegal activities engaged by the government of Russia,” according to CNN. Biden gaveled down his objection because he did not have any backing from a senator.

Democratic Washington Rep. Pramila Jayapal objected to Georgia’s vote certification, with Biden telling her “it is over,” according to the report.

Biden interrupted Democratic Texas Rep. Sheila Jackson Lee when she attempted to object to the certification of votes after New York’s tally was read.

“I object on the massive voter suppression that included-” she began.

Biden interrupted her, saying “the debate is not in order” as the congresswoman lacked the required senator signature, CNN reported.

In 11 instances, Biden was forced to make it clear that objections were moot if not backed by a senator as a handful of representatives attempted to block the vote.

The only question remains, like Gore and Biden before him, will Vice President Mike Pence do the same? (RELATED: Biden Overruled Objections To Trump’s 2017 Electoral College Win — Will Pence Do The Same For Biden? His Office Won’t Say)