Shortly after the death of Republican Louisiana Representative-elect Luke Letlow was announced Tuesday following his positive COVID-19 test, a number of reporters and liberals began to speculate about the 41-year-old’s policy record during the pandemic and use his death to condemn Republicans.

Some sought to juxtapose news of Letlow’s death with claims that he held maskless rallies and advocated for reopening businesses, framing his death as ironic. Others took shots at the GOP and its policies during the pandemic.

Letlow announced Dec. 18 that he tested positive for COVID-19, according to Politico. Letlow was in an intensive care unit at Ochsner LSU Health in Shreveport, Louisiana. He is survived by his wife and two young children. (RELATED: Republican Representative-Elect Luke Letlow Dies Of COVID-19)

Dean Grayson, a doctor and former Democratic congressional candidate for Florida’s 8th District, referred to one of Letlow’s tweets from October where Letlow highlights that COVID-19 precautions have been taken and that it’s “vital” to open the economy. Grayson announced Letlow’s death while pointing to his “maskless rallies.”

A journalist at the Advocate noted in a story published after Letlow’s death that he wore a mask during a gathering the reporter attended, that Letlow had told him that he usually wore one and that his campaign utilized conference calls and Zoom to campaign. 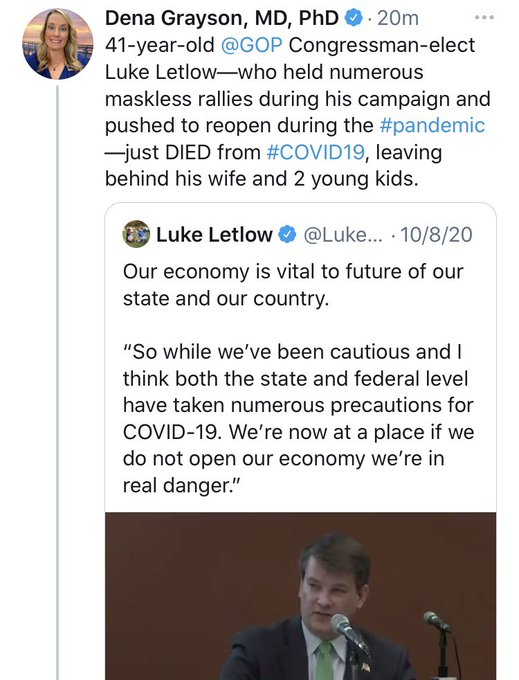 41-year-old @GOP Congressman-elect Luke Letlow—who held numerous maskless rallies during his campaign and pushed to reopen during the #pandemic—just DIED from #COVID19, leaving behind his wife and 2 young kids. https://t.co/IE08iqIrWa

Molly Jong-Fast, editor-at-large of the Daily Beast, also quote-tweeted the video where Letlow said the shutdown of businesses was causing great damage. Letlow’s account no longer exists, according to the Twitter label that appears when trying to view Letlow’s months-old tweet.

He died of coronavirus yesterday at 41 years old. https://t.co/3pqM0a79UX

Aaron Rupar, an associate editor at Vox, also quoted Letlow’s tweet about reopening the economy in his own tweet calling Letlow’s death a “tragedy.” 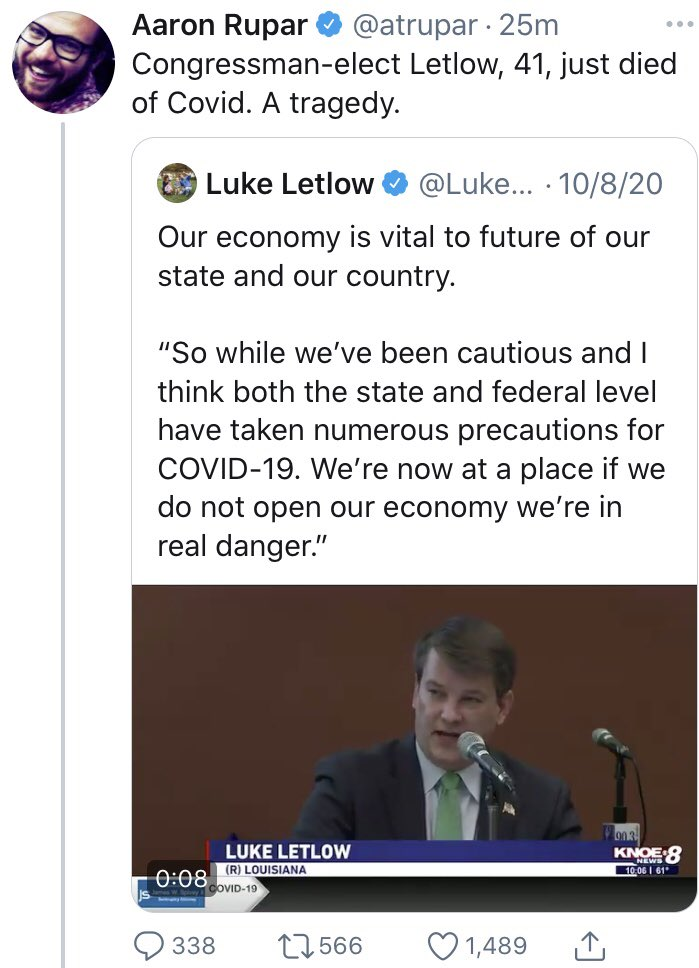 Writer Nandini Balial also commented on one of Letlow’s tweets following his death.

A Louisiana Republican soon to be congressman named #LukeLetlow. Age 41 died of covid today after winning the seat a few weeks ago. He was suppose to be sworn in this weekend. We mourn his death bc he left behind two small children but.. ????????

He was an anti masker who called covid a hoax. This virus will KILL you so please don’t follow this idiots Republicans(who gladly took the vaccine) after preaching for months the virus was a hoax. Looking at you @marcorubio(choke & die)

It’s a shame. He had a long career ahead of him of attacking women’s access to healthcare while making it impossible to control gun violence. Alas, he threw it all away to selfishly benefit from anti-scientific political pandering.

Please don’t lecture me until you’ve taken a moment to acquaint yourself with him. He cheered when the pandemic was used as a pretext to shut abortion clinics, and continued to hold unsafe political events, pic is from last month. He was happy to risk everyone else’s safety. pic.twitter.com/H1cn3o8k37

American author Don Winslow extended his sympathies to Letlow’s wife and children, and took a jab at President Donald Trump — along with Letlow’s support of Trump — in a tweet following Letlow’s death.

The Republican elect Congressman @LukeLetlow seen in this video who supported all of Donald Trump’s #COVID19 policies has died from #COVID19 complications.

My sympathies to his wife and two children. https://t.co/2ZNrsIFx7N

What did Rep.-elect Luke Letlow (R-La) die of today?

Professor and attorney Seth Abramson said he was compelled to think of all of the people who “died ‘for’ Trump” by ignoring the dangers of COVID-19 because acknowledging such dangers “would displease the Dear Leader.”

With the tragic death of Rep.-elect Letlow, I find myself thinking of all those who died “for” Trump: who found themselves compelled to ignore the dangers of COVID-19 because they knew acknowledging them would displease the Dear Leader—a man who never even cared about them at all