President Donald Trump is still contesting the results of the 2020 presidential election, and looks poised to exert more pressure on Republican legislators to do the same. Lost in the coverage of Trump’s departure from the White House could be some of his administration’s key accomplishments, such as his record of deregulation.

Trump promised after his election that for every new regulation his administration created, two frivolous, duplicitous or costly regulations would be done away with, as reported by Forbes. The White House frequently touted the administration’s deregulation efforts, but the tumult of 2020 has largely buried Trump’s track record of deregulation. 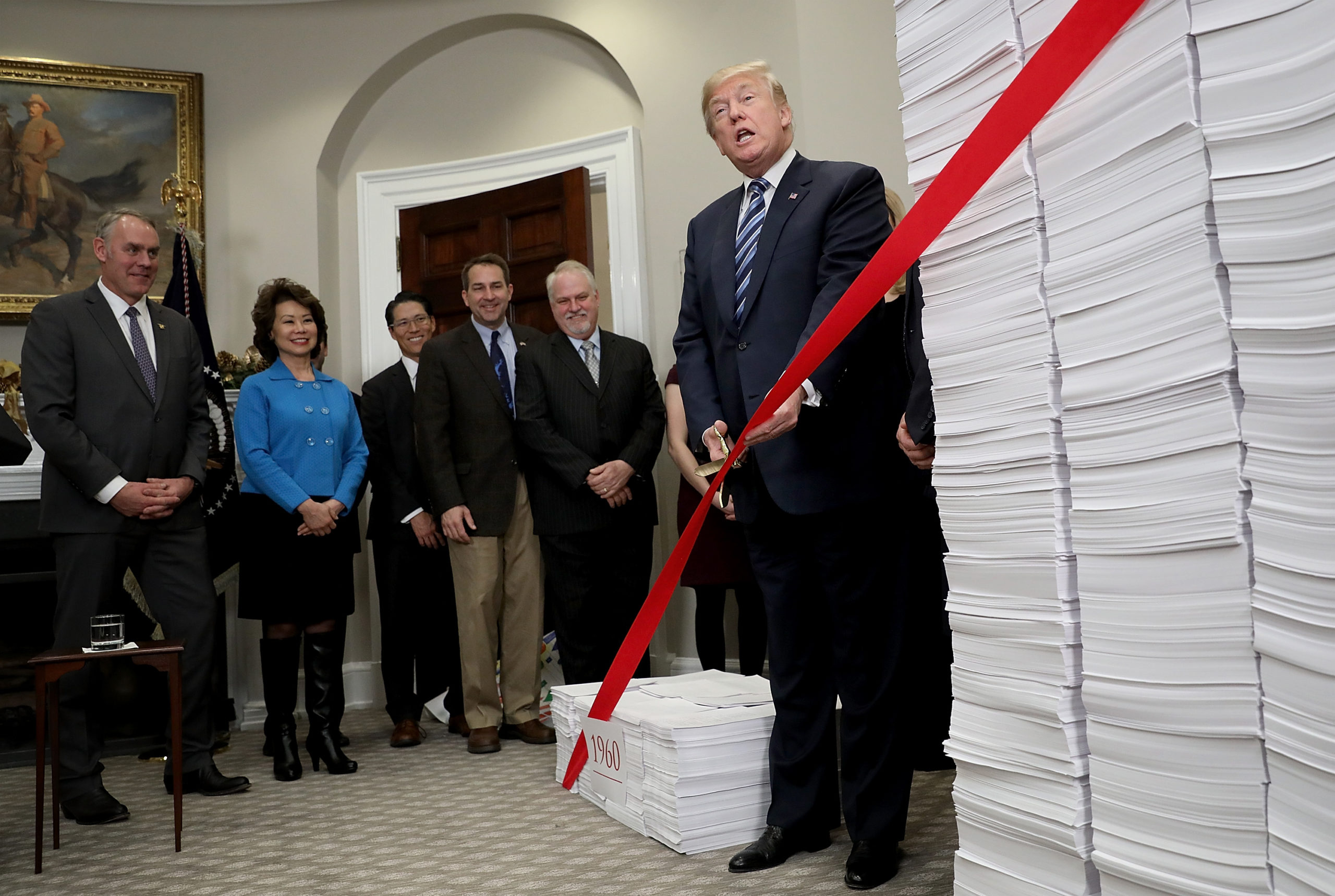 Only 10 days after Trump entered office, on Jan. 30, 2017, he signed Executive Order 13771 (EO13771). The order required executive agencies to offset the cost of issuing any significant regulation with two or more deregulatory actions. It also created a new system for the Office of Management and Budget (OMB) to create limits on the value of regulation’s “incremental costs” during a fiscal year. (RELATED: White House’s Deregulation Effort Specifically Boosts Black America’s COVID Recovery, Ben Carson Says)

This week, POTUS ????an EO to reduce unnecessary licensing regs & expand opportunities across????????

And through the Initiative on Regulatory Innovation, the Administration is working alongside State/Local/Tribal partners across the country to reduce regulations, create jobs & grow local economies. https://t.co/GUjxOWPzky

The Trump administration’s 2018 Unified Agenda of Regulatory and Deregulatory Actions found that 176 deregulatory actions racked up $23 billion in savings in FY2018, according to The Heritage Foundation. Over that same time period, the Trump administration issued 14 significant regulatory actions while taking action to undo 57 with the same classification. Significant regulations were defined as regulations that incur costs that exceed $100 million per annum, according to The Heritage Foundation.

At the end of the 2018 fiscal year, the Trump administration had eliminated 12 regulations for every new one created — down from the previous 22-to-one ratio — according to the Daily Signal.

In total, the administration withdrew or delayed actions on 2,253 regulations, 648 of which came in the 2018 fiscal year, according to The Heritage Foundation. OIRA also said that in Trump’s first 22 months in office, his administration saved $33 billion due to deregulation on net. 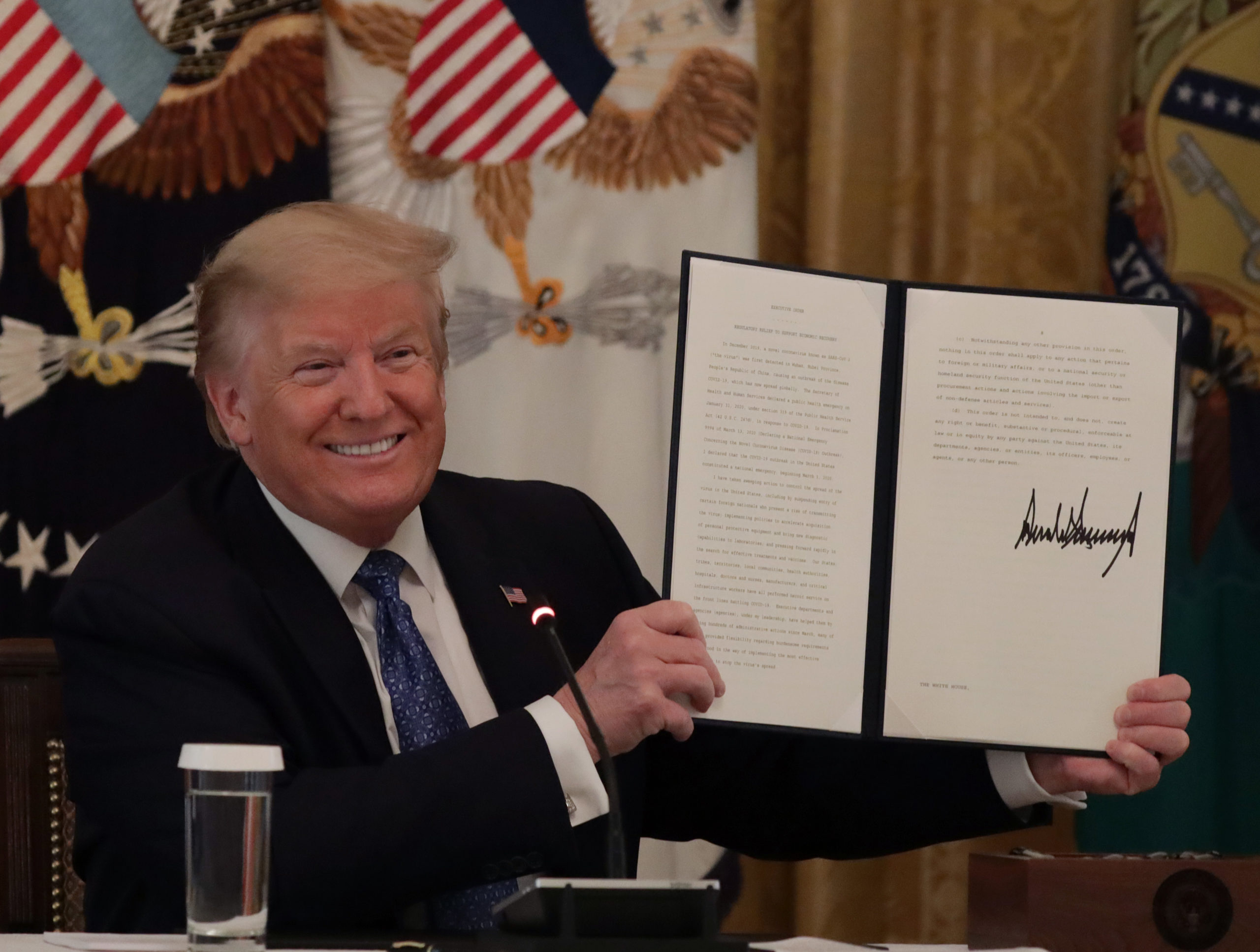 WASHINGTON, DC – MAY 19: U.S. President Donald Trump holds up a copy of an executive order he signed on DOT deregulation, during a meeting with his cabinet in the East Room of the White House on May 19, 2020 in Washington, DC. (Photo by Alex Wong/Getty Images)

In 2018, the Office of Information and Regulatory Affairs projected that caps created under EO13771 would reduce regulatory costs by $18 billion on net, The Heritage Foundation claims.

During the Obama administration, annual regulatory costs increased $122 billion, according to an analysis from The Heritage Foundation.

A report titled “The Economic Effects of Federal Deregulation Since January 2017: An Interim Report” released by the White House in 2019 found deregulation during the Trump administration will raise household income by $3,100 over the next decade.

“The deregulatory efforts of the Trump administration have also removed mandates from employers, especially smaller businesses, and have removed burdens that would have eliminated many small bank lenders from the marketplace,” Casey Mulligan, the then chief economist for the White House Council of Economic Advisers, told reporters at the time, according to the Daily Signal. (RELATED: Trump’s International Campaign To Get Tough On China Is Working)

Twenty major deregulatory actions examined in the Council of Economic Advisers’ report found that consumer and business savings were projected at $220 billion a year while increasing income by 1.3% after inflation, the Daily Signal reported.

Deregulation was also crucial in the development of the coronavirus vaccine, beating the mumps vaccine to be the fastest vaccine ever developed, according to History. Regulatory changes under Operation Warp Speed allowed pharmaceutical companies, such as Pfizer, to “manufacture at risk” while awaiting emergency use authorization from the U.S. Food and Drug Administration.