Thousands of Iraqis assembled Sunday in Baghdad to commemorate the anniversaries of the deaths of Iranian Gen. Qassem Soleimani and Iraqi militia head Abu Mahdi al-Muhandis, both of whom were killed together in a Trump-ordered drone strike Jan. 3. 2020. 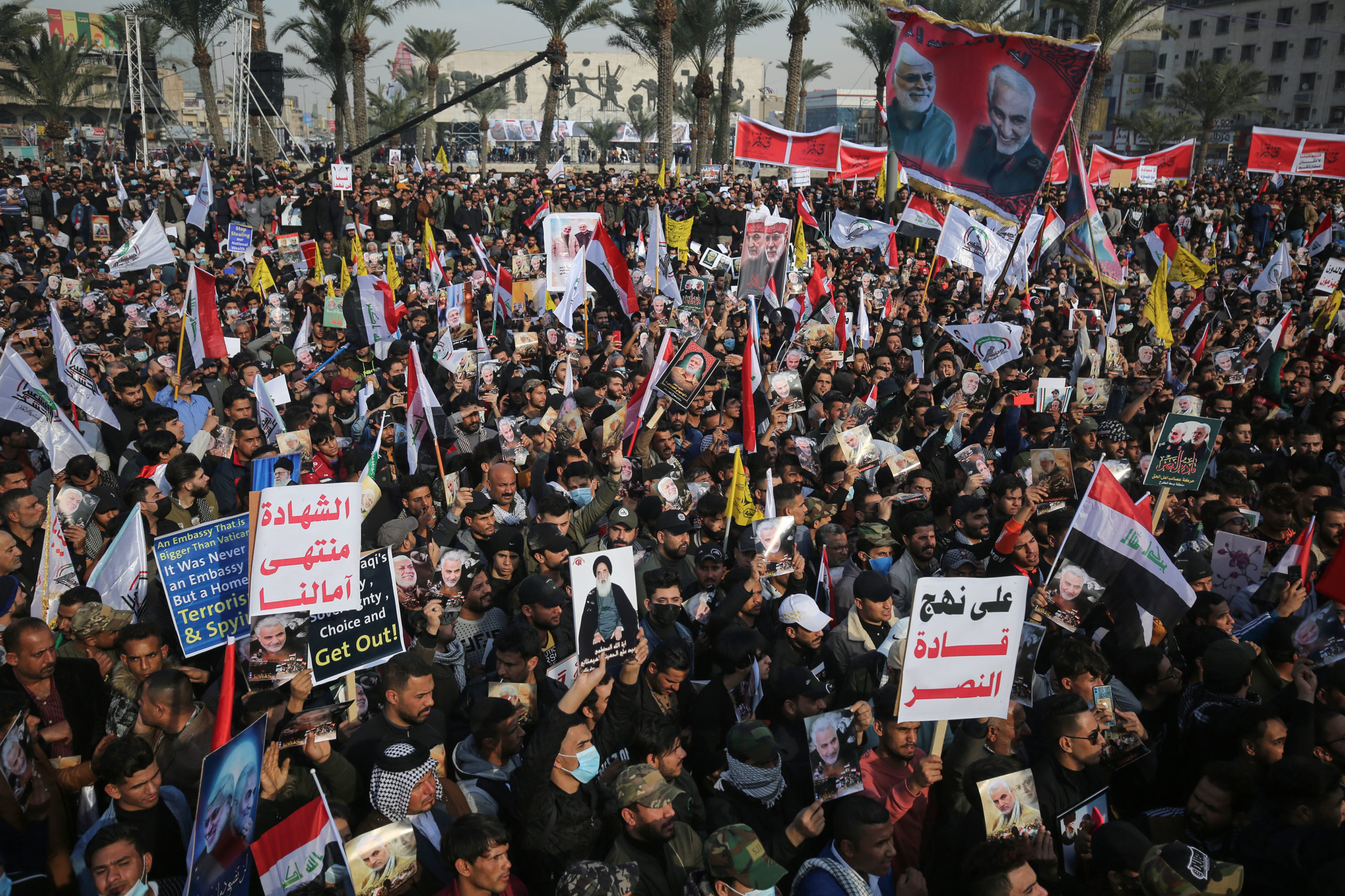 Iraqi demonstrators lift flags and placards as they rally in Tahrir square in the capital Baghdad on January 3, 2021, to mark one year after a US drone strike killed Iran’s revered commander Qasem Soleimani and his Iraqi lieutenant Abu Mahdi al-Muhandis near the capital. (Photo by AHMAD AL-RUBAYE/AFP via Getty Images)

“We call upon the government and the parliament to expel the occupying foreign forces, especially the brutal American forces, the infidels, the immorals, who killed the heroes and leaders of victory,” protestor Muhammad Shubr al-Husseini told the AP.

“No, no to America!” somebody else among the mostly mask-less masses shouted. “You killed our guest. There is no place here for your embassy,” read some of the banners.

As part of the commemorations, “thousands” of mourners also marched on the highway leading to Baghdad’s airport Saturday evening, where the U.S. strike killed Soleimani and Al-Muhandis, Al Jazeera reported.

The attack scene, according to Al Jazeera, was transformed Saturday into a shrine-like area sealed off with red ropes as mourners lit candles in front of photos of Soleimani and al-Muhandis placed in the middle. (RELATED: Soleimani Was Planning ‘Imminent Attacks’ That Could Have Killed Hundreds Of Americans, Top US Official Says)

The Saturday commemorations, similar to those held in Yemen, Syria, and Lebanon, were mostly led by the pro-Iran Hashd al-Shaabi paramilitary, Middle East Eye reported. 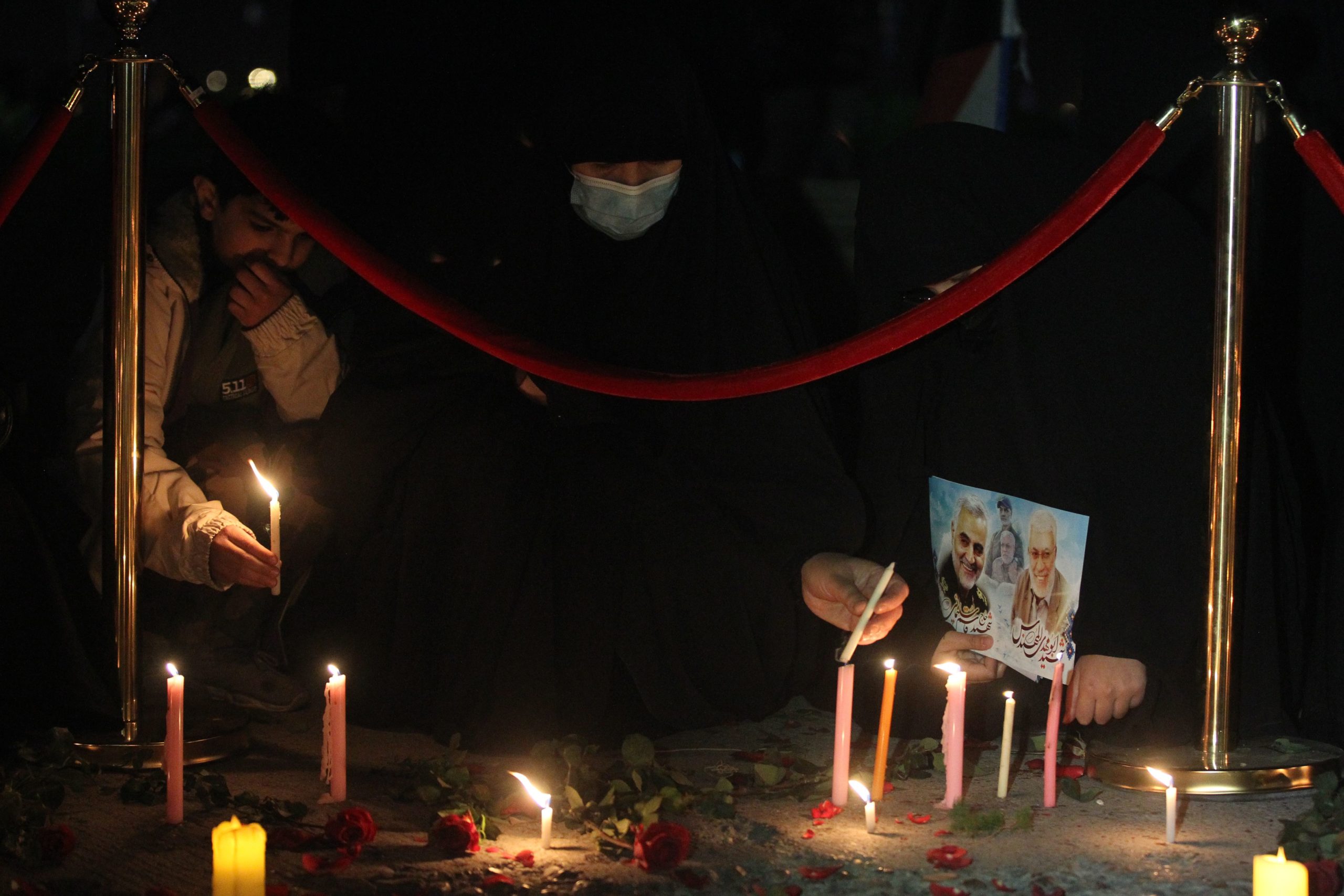 Supporters of the Hashed al-Shaabi hold a candlelight vigil at the site of the January 3, 2020 US drone strike on Qasem Solemani at Baghdad Airport, in Baghdad, Iraq on January 2, 2021. – On January 3, 2021, Iraq will mark the first anniversary of the killing of Iran’s top military commander Qasem Soleimani in a drone strike at Baghdad International Airport that was authorized by US President Trump. (Photo by AHMAD AL-RUBAYE/AFP via Getty Images)

“The US and the Zionist regime have not created security anywhere, and if something happens here and a war breaks out, we will make no distinction between the US base and its host country. Naturally, the very same Arab countries of the region will bear the brunt,” Hajizadeh told Al-Manar TV, according to Tehran Times.

Hajizadeh’s comments come as Iran’s Foreign Minister Javad Zarif on Saturday accused Israel of inciting a U.S.-Iran war as part of a “trap,” an allegation Israel on Sunday dismissed as “nonsense,” according to Reuters.

New intelligence from Iraq indicate that Israeli agent-provocateurs are plotting attacks against Americans—putting an outgoing Trump in a bind with a fake casus belli.

Be careful of a trap, @realDonaldTrump. Any fireworks will backfire badly, particularly against your same BFFs.

Tensions between Iran and the U.S. have been rising ahead of Soleimani’s death anniversary.

On Dec. 3, Iranian President Hassan Rouhani issued a death threat against President Trump, saying, “in a few days, the life of this criminal will end and he will go to the dustbin of history.”

The U.S. conducted B-52 bomber overflights on Dec. 10 and Dec. 30 in the Persian Gulf to deter Iran from attacking American interests in the region, a move Zarif called a “pretext for war.”

On Dec. 23, Trump warned Iran against harming a single American life after Iran backed militants fired missiles on the U.S. Embassy in Baghdad.

…Some friendly health advice to Iran: If one American is killed, I will hold Iran responsible. Think it over.

Iran has also allegedly been behind a website called “Enemies of the People,” which in the days following Nov. 3 tried to incite lethal election-related violence against U.S. officials, including the FBI’s director.