A Catholic priest in Chicago has been removed from the parish that he has presided over since 1981 following allegations that he sexually abused a minor more than 40 years ago, numerous sources reported.

Father Michael Pfleger, 71, has been removed from service at St. Sabina parish by his superiors. The decision follows “receipt by the Archdiocese of Chicago’s Office for Child Abuse Investigations and Review of an allegation of sexual abuse of a minor more than 40 years ago,” Cardinal Blase Cupich announced in a letter sent to the parish community Tuesday, the Chicago Sun Times reported.

JUST IN: Father Michael Pfleger, the longtime pastor at St. Sabina Church, has been removed from the Auburn Gresham parish following revelations of a decades-old sexual abuse allegation against a minor. https://t.co/T9zywUJ7Vt

A statement from the @archchicago says Father Michael Pfleger has agreed to live away from the St. Sabina parish while the sexual abuse allegation is investigated. @WBBMNewsradio pic.twitter.com/KG3uNYyjlj

Pfleger responded to the allegations in a Facebook post Wednesday morning, saying he was asked by the Diocese “not to speak out at this time.”

“I can’t possibly respond to the hundreds of Texts, emails, and calls that I have received from all across the nation since yesterday. I am devastated, hurt and yes angry, but I am first, a person of Faith, I Trust God,” the statement reads in part. “Pray also for the person, my life is more than a 40 year old accusation, and on that and my Faith I will stand…The Lord is my Shepherd….. I love you….”

Some parishioners responded by expressing doubt about the veracity of the allegations, calling them “unfounded”, and affirming their support of Pfleger.

“We, the Cabinet of the Faith Community of St. Sabina, believes that these accusations are unfounded and we boldly stand behind the integrity, passion, work and ministry of our Sr. Pastor, Rev. Michael Pfleger,” a statement from the parish reads. The Cabinet also said it would “fully cooperate” with the archdiocese’s protocols during an investigation into the allegations.

Cupich said Pfleger would live away from the parish during an investigation, and that the allegation has not yet been proven true or false so there should not be a presumption of guilt or innocence yet, according to ABC Chicago. The allegation was also reported to the Illinois Department of Children and Family Services and Cook County State’s Attorney.

Pfleger is an outspoken anti-gun violence activist who most recently led a march in Chicago on New Year’s Eve protesting the “virus of violence,” and has marched with civil rights leader and former Democratic presidential hopeful Rev. Jesse Jackson. He has also participated in Black Lives Matter activism. Jackson said he was “in shock” after hearing about the allegations toward Pfleger, according to the Chicago Sun Times. (RELATED: Chicago’s Violence Rages Over Christmas Weekend) 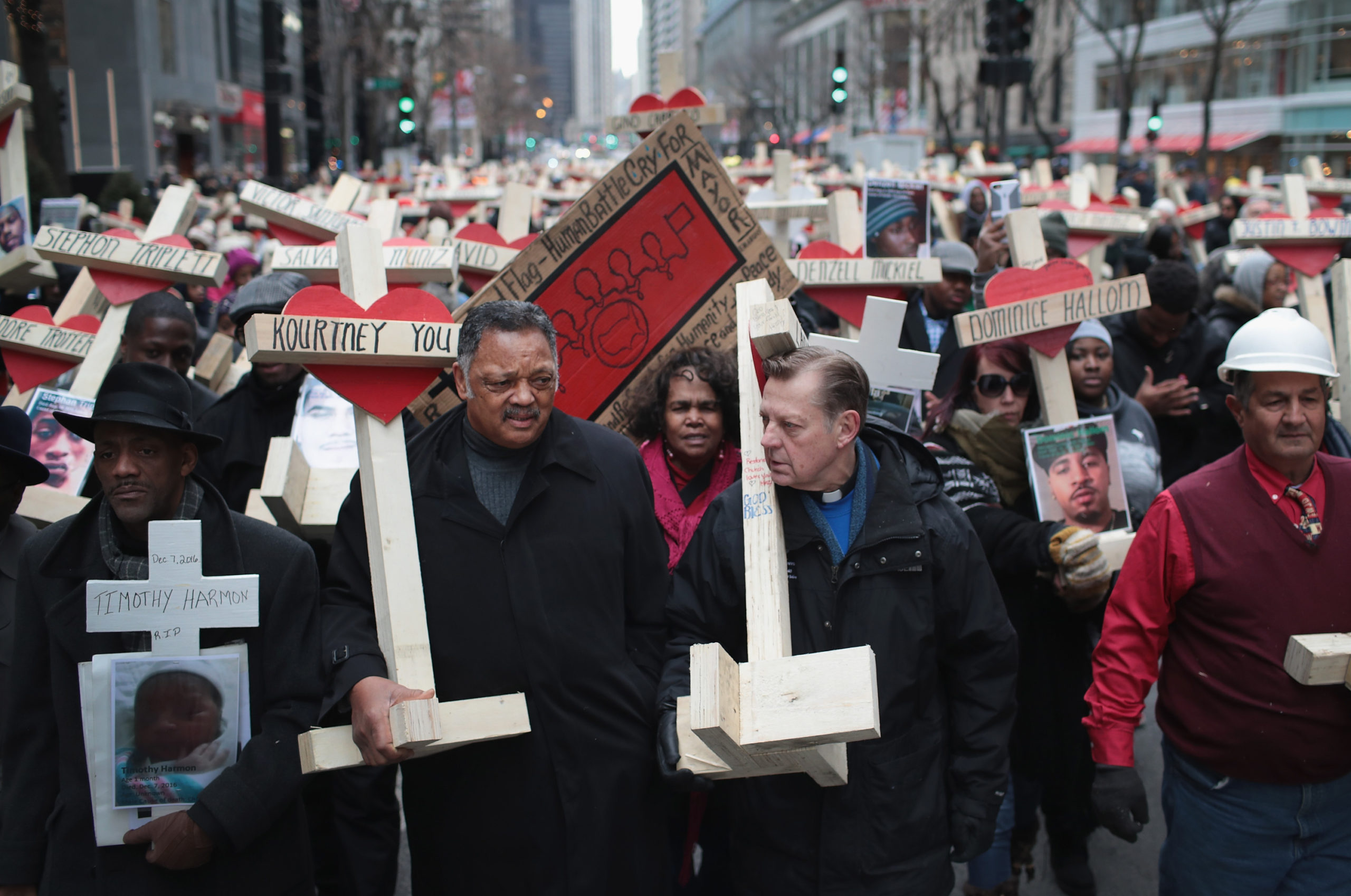 CHICAGO, IL – DECEMBER 31: The Rev. Jesse Jackson (L) and Rev. Michael Pfleger carry crosses as they march with other residents, activists, and family members of victims of gun violence down Michigan Avenue to draw attention to the city’s rising murder rate on December 31, 2016 in Chicago, Illinois. (Photo by Scott Olson/Getty Images)

Hundreds of Catholic clergy in Illinois were accused of sexual misconduct in 2019, many of which served in the Archdiocese of Chicago.

In October, Cupich asked Father Daniel McCarthy to “step aside from ministry” after the Archdiocese received an allegation of sexual abuse that was said to have happened more than 50 years ago.