Rioters left damage and trash in the wake of the Capitol Building riot on Wednesday, photographs and videos show.

Rioters, many of which were wearing pro-President Donald Trump gear, stormed the U.S. Capitol Building after scaling scaffolding set up for inauguration and breaching a door on the west side of the building. Several people entered through broken windows and broken doors.

Trash, flags and signs were left scattered around the Capitol rotunda and throughout the hallways, photographs show.

They chanted “stop the steal” and “whose house? our house!” as they moved through the building, video shows. 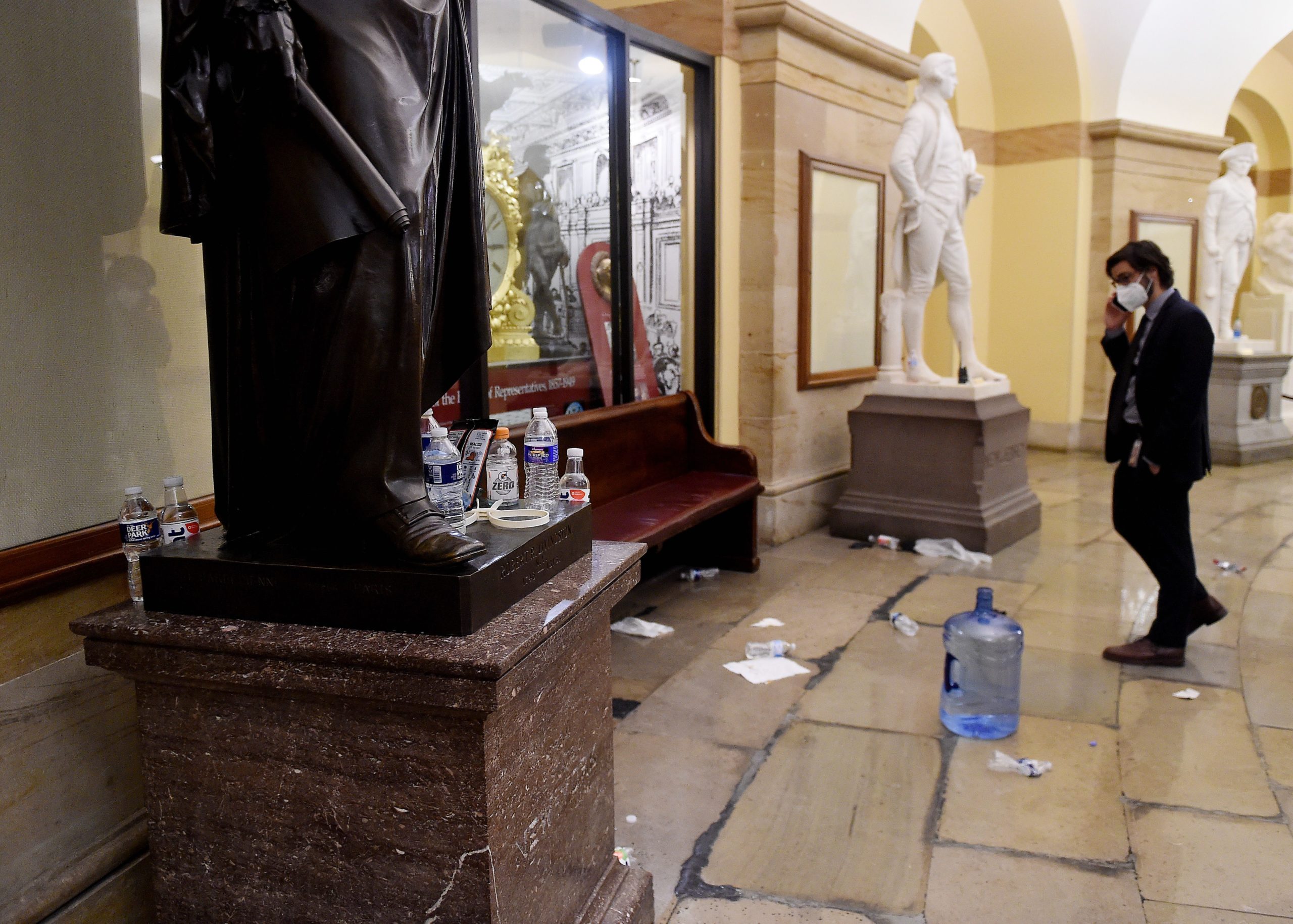 TOPSHOT – Damage is seen inside the US Capitol building early on January 7, 2021 in Washington, DC, after supporters of US President Donald Trump breeched security and entered the building during a session of Congress  (Photo by Olivier DOULIERY / AFP) (Photo by OLIVIER DOULIERY/AFP via Getty Images) 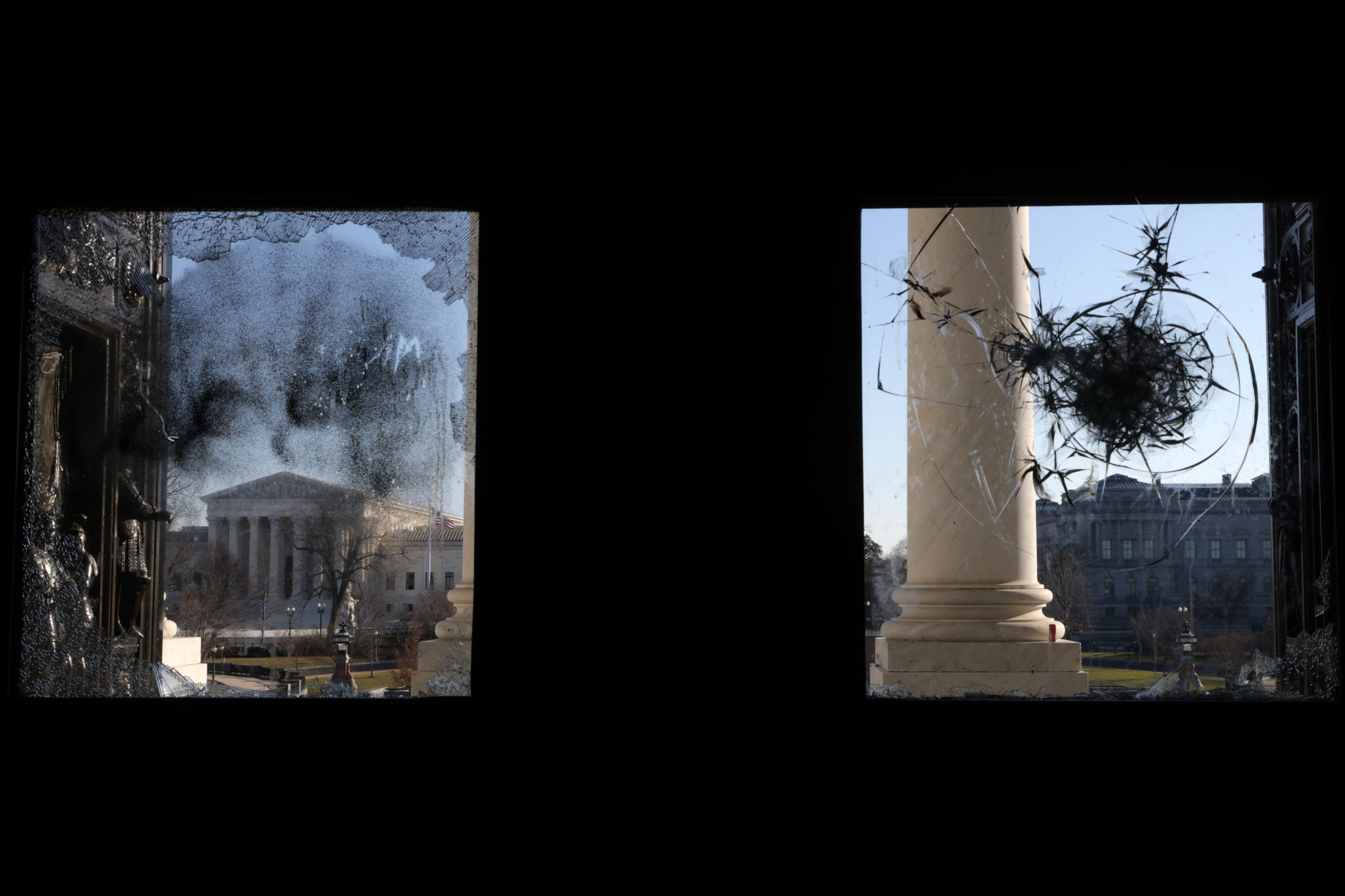 WASHINGTON, DC – JANUARY 07: The U.S. Supreme Court is seen through a damaged entrance of the U.S. Capitol January 7, 2021 in Washington, DC (Photo by Alex Wong/Getty Images) 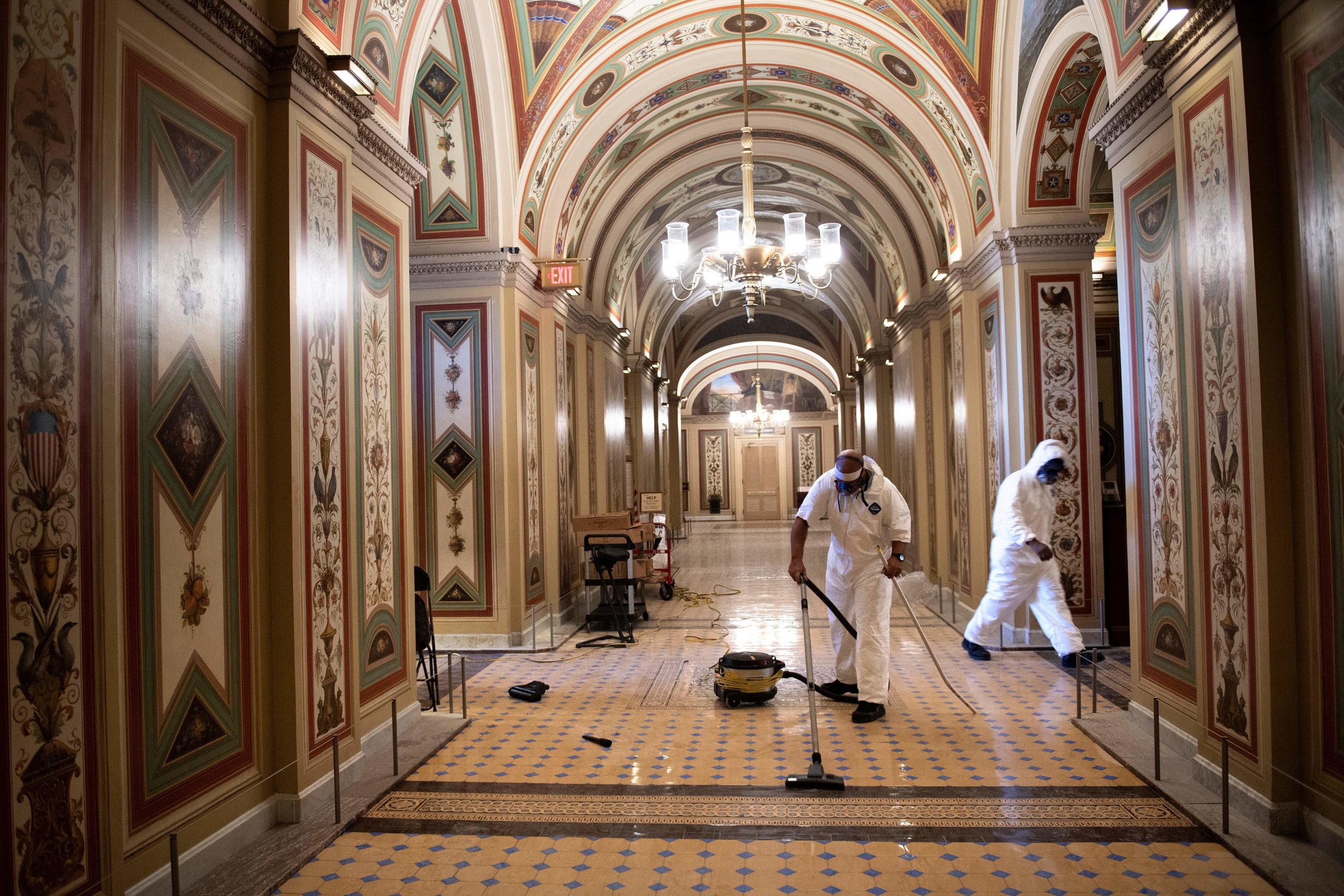 Workers clean damage near an overrun Capitol Police checkpoint a day after a pro-Trump mob broke into the US Capitol January 7, 2021, in Washington, DC. (Photo by Brendan Smialowski / AFP) (Photo by BRENDAN SMIALOWSKI/AFP via Getty Images)

Watch @robertmooreitv‘s report from inside the Capitol building as the extraordinary events unfolded in Washington DChttps://t.co/krCQf1uQbx pic.twitter.com/SiWbzF5Nzs 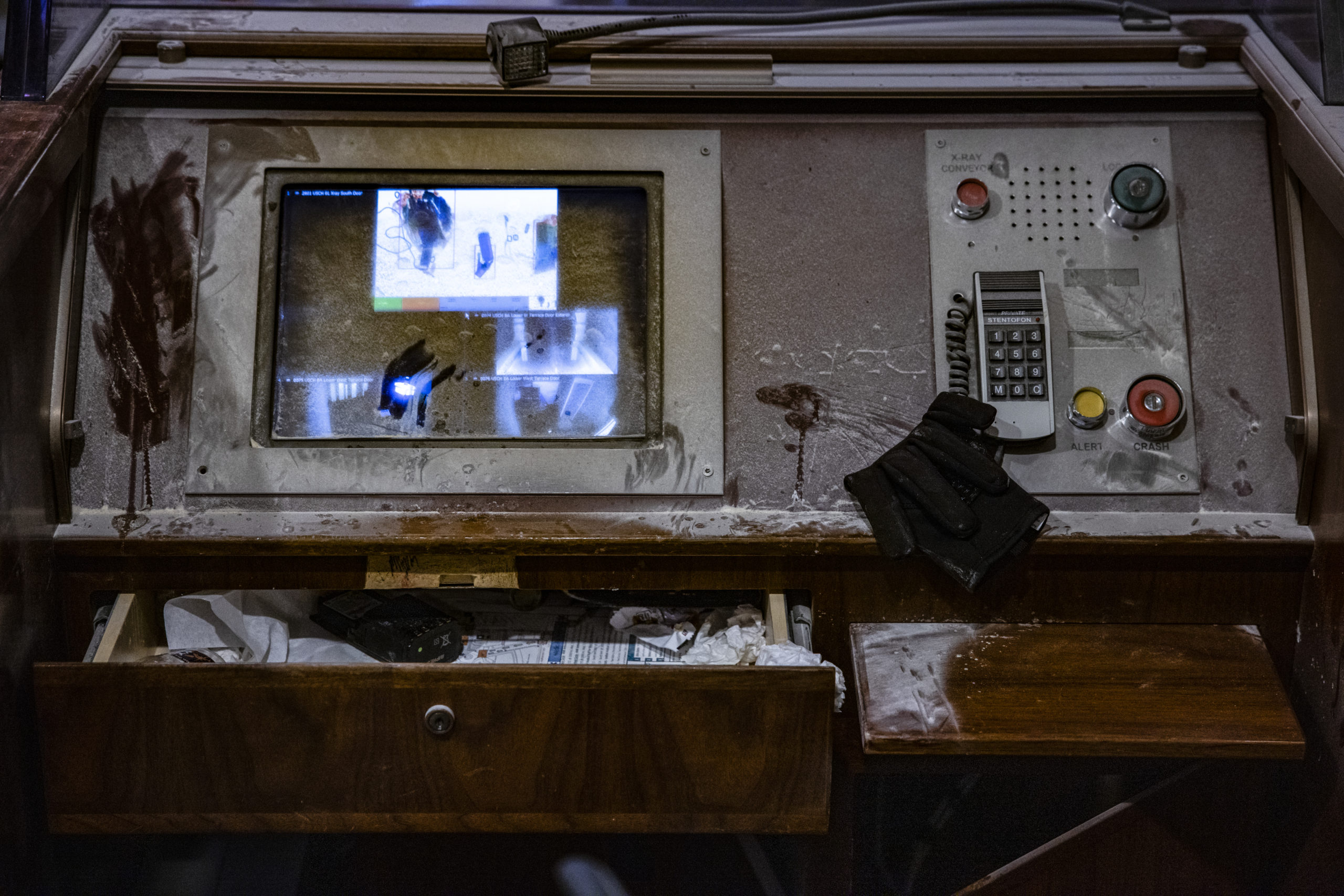 WASHINGTON, DC – JANUARY 07: The remnants of pepper spray, tear gas, and fire extinguishers dusts the security console at the entrance to the western promenade of the U.S. Capitol building on January 7, 2021 (Photo by Samuel Corum/Getty Images) 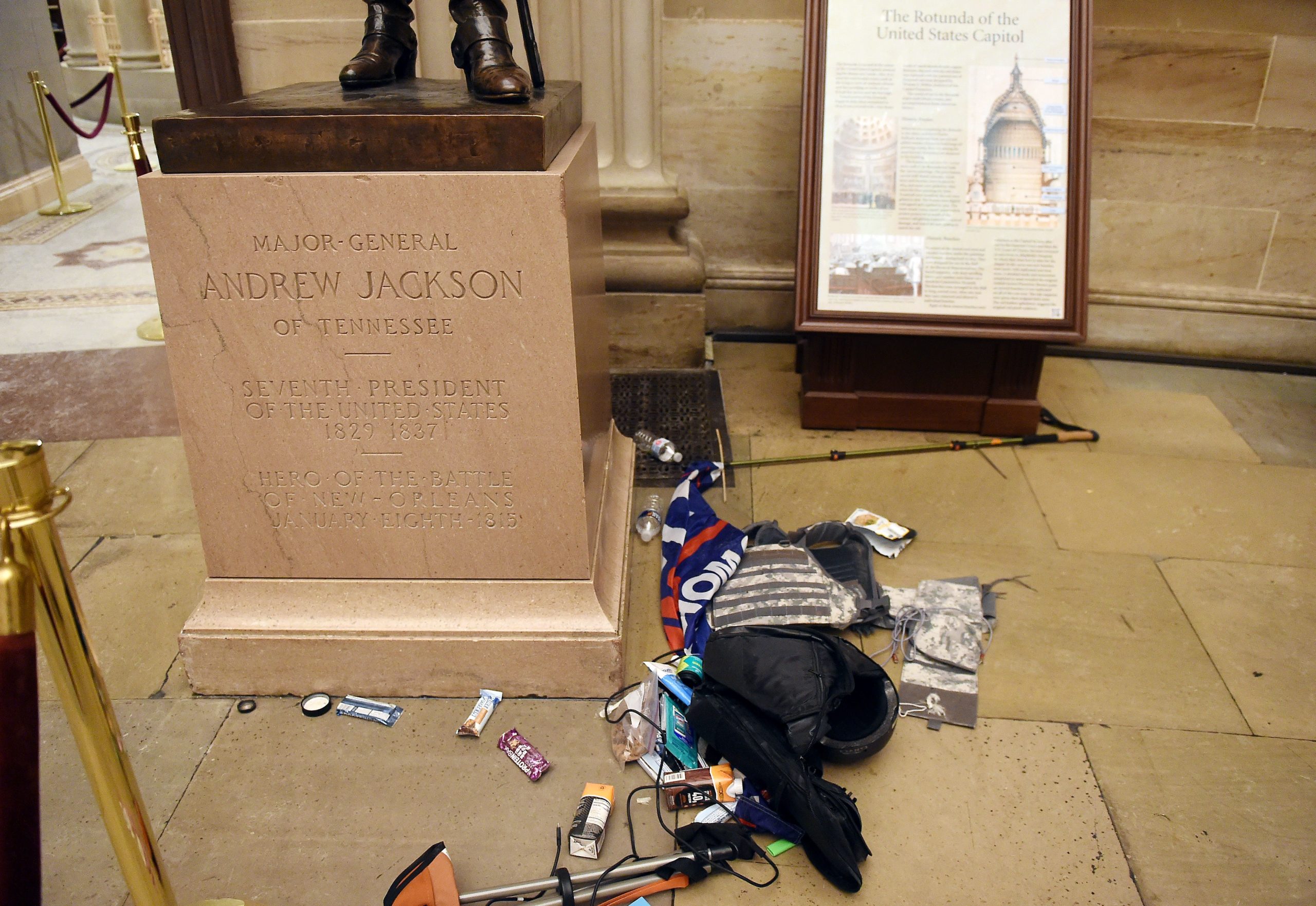 Damage is seen inside the US Capitol building early on January 7, 2021 in Washington, DC, after supporters of US President Donald Trump breeched security and entered the building during a session of Congress  (Photo by Olivier DOULIERY / AFP) (Photo by OLIVIER DOULIERY/AFP via Getty Images)

Several rioters said that they raided the Capitol building because “this is our country, this is our house,” video shows.

Rioters broke into official’s offices and rummaged through their desks. Democratic Sen. Jeff Merkley’s tweeted a video saying rioters stole a laptop from his office and showed artwork torn from his office’s wall and cigarette butts and a Trump flag left behind.

When law enforcement officials eventually entered the building, fights between police and rioters broke out and several rounds of teargas were deployed, video shows. 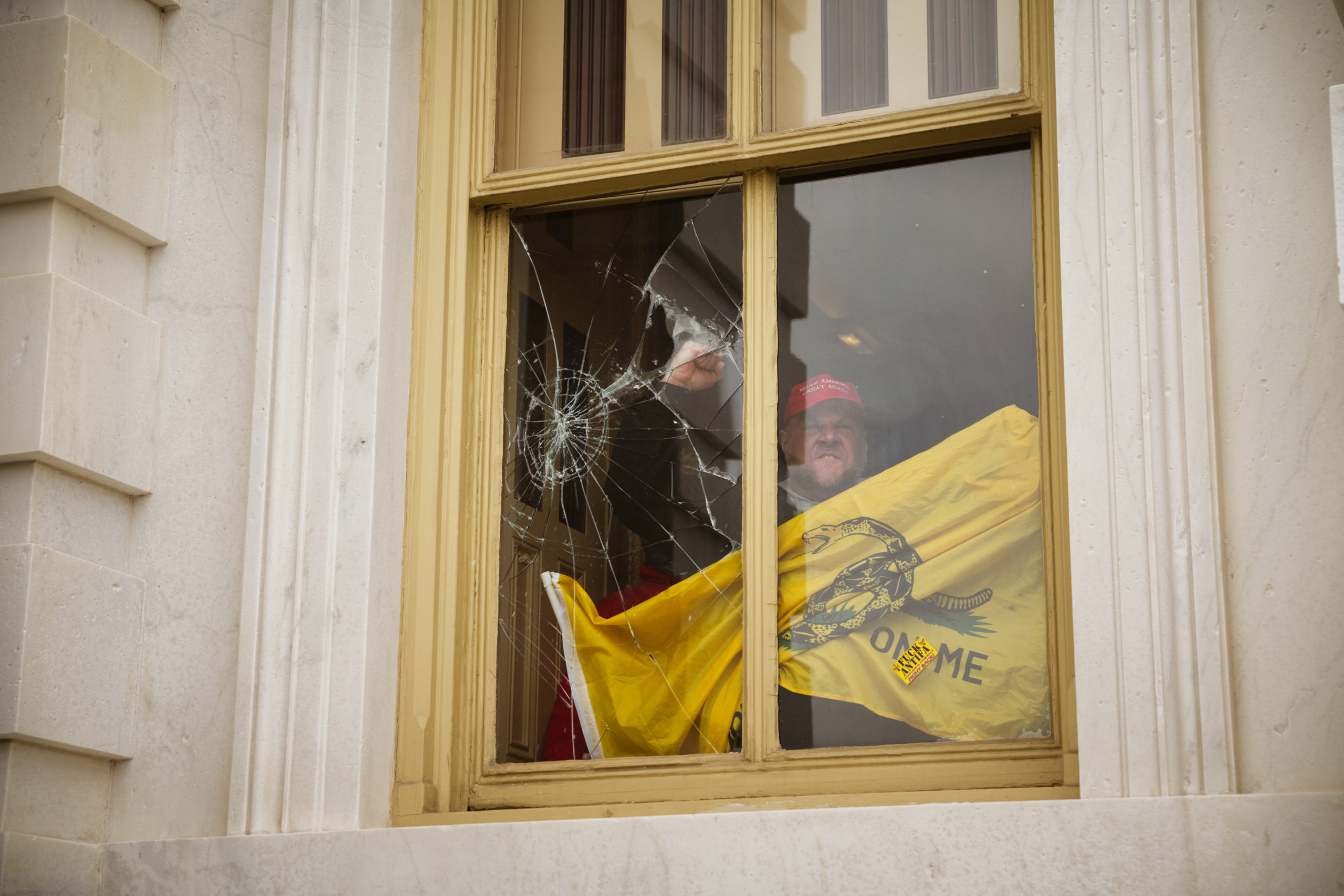 WASHINGTON, DC – JANUARY 06: A member of a pro-Trump mob shatters a window with his fist from inside the Capitol Building after breaking into it on January 6, 2021 in Washington, DC (Photo by Jon Cherry/Getty Images)

Several windows were smashed around the building and debris was left in the halls, photographs show. Rioters appeared to use Capitol Police riot shields to break some of the windows, video shows.

One man removed a podium bearing the seal of the speaker of the House from the building, photographs show. 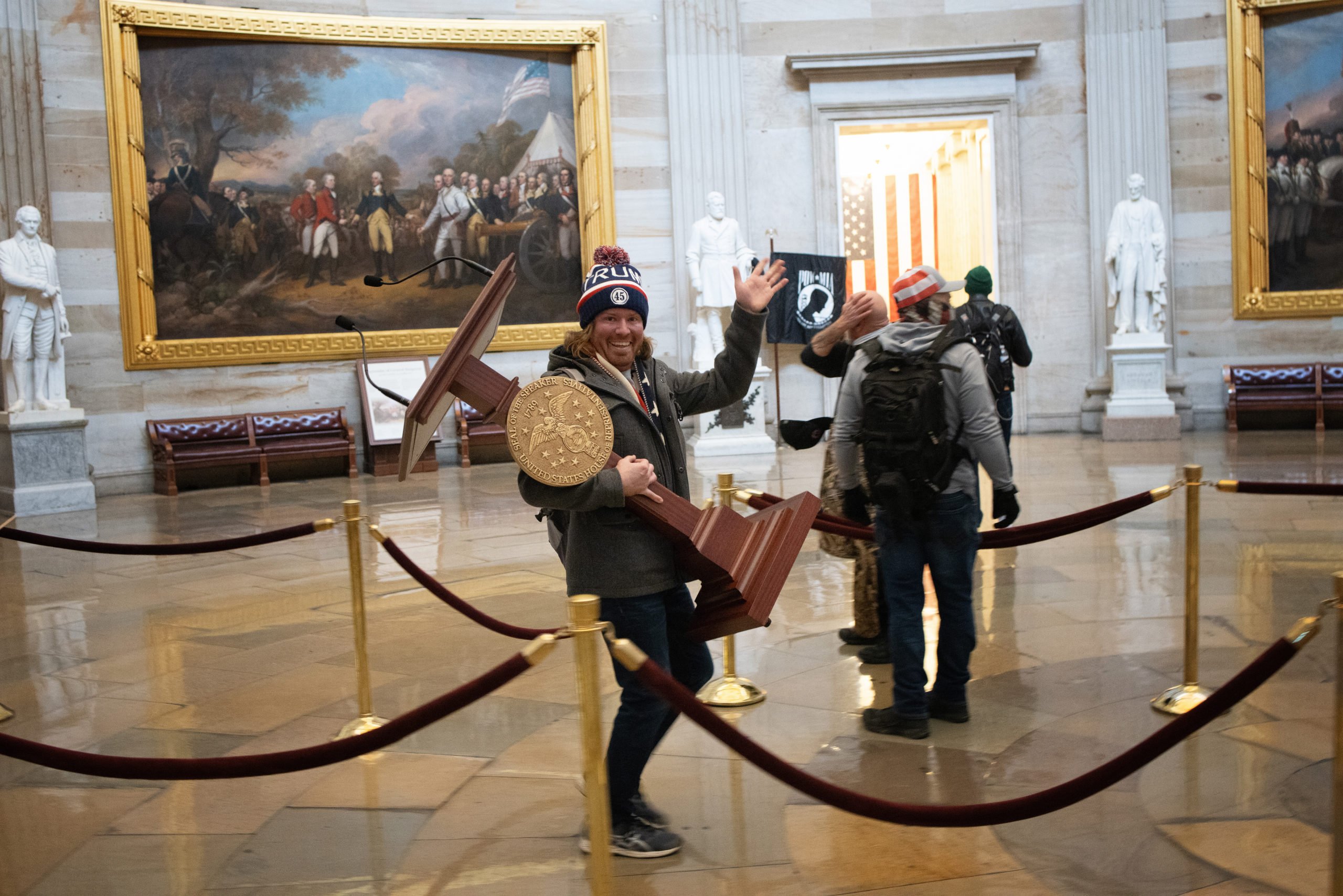 WASHINGTON, DC – JANUARY 06: A pro-Trump protester carries the lectern of U.S. Speaker of the House Nancy Pelosi through the Rotunda of the U.S. Capitol Building  (Photo by Win McNamee/Getty Images)

One police officer was visibly concerned about the number of rioters entering the building as they pushed him into a wall, video shows.

Four people died, at least 70 people were arrested and several firearms were recovered, Fox News reported. At least 14 police officers were injured, and one was hospitalized after a crowd assaulted him.