Authorities in a town near Houston, Texas, were met by an armed resident when they attempted a forced eviction earlier Friday and were forced to call in a SWAT team for assistance.

Deputies trying to serve a court-ordered eviction in Deer Park, Texas, were told by the resident 50-year-old Robert Young, who spoke through the front door, that he would not come out. He then racked a shotgun and threatened to shoot them, authorities said according to ABC13. Also inside was Young’s wife Sunny Young, 45.

Deputies called in the Deer Park SWAT to assist them. Law enforcement is “working jointly to bring this to a safe conclusion for all involved,” said Lt. Chris Brown with the Deer Park Police Department, KPRC 2, an affiliate of NBC, reported.

Negotiations lasted several hours and the police obtained an arrest and search warrant, according to ABC13.

However, negotiations were unsuccessful and authorities entered with force to end the standoff.

“Eventually, those negotiations broke down and we did breach the front of the house and we deployed gas inside the house, at which time he did come out of the house peacefully,” Brown said, according to ABC13.

A search of county records revealed that the residence was owned by an auction company, reported ABC13.

Lt. Charles Francis with the Precinct 8 Constable’s Office elaborated, according to ABC13. “This is not a normal eviction situation between like an apartment complex, this was actually an owner finance, foreclosure situation,” he said. “From what we could tell, this started back in 2017. Apparently, the actual occupants were approximately one and a half years behind on their payments before they were even foreclosed on them.” 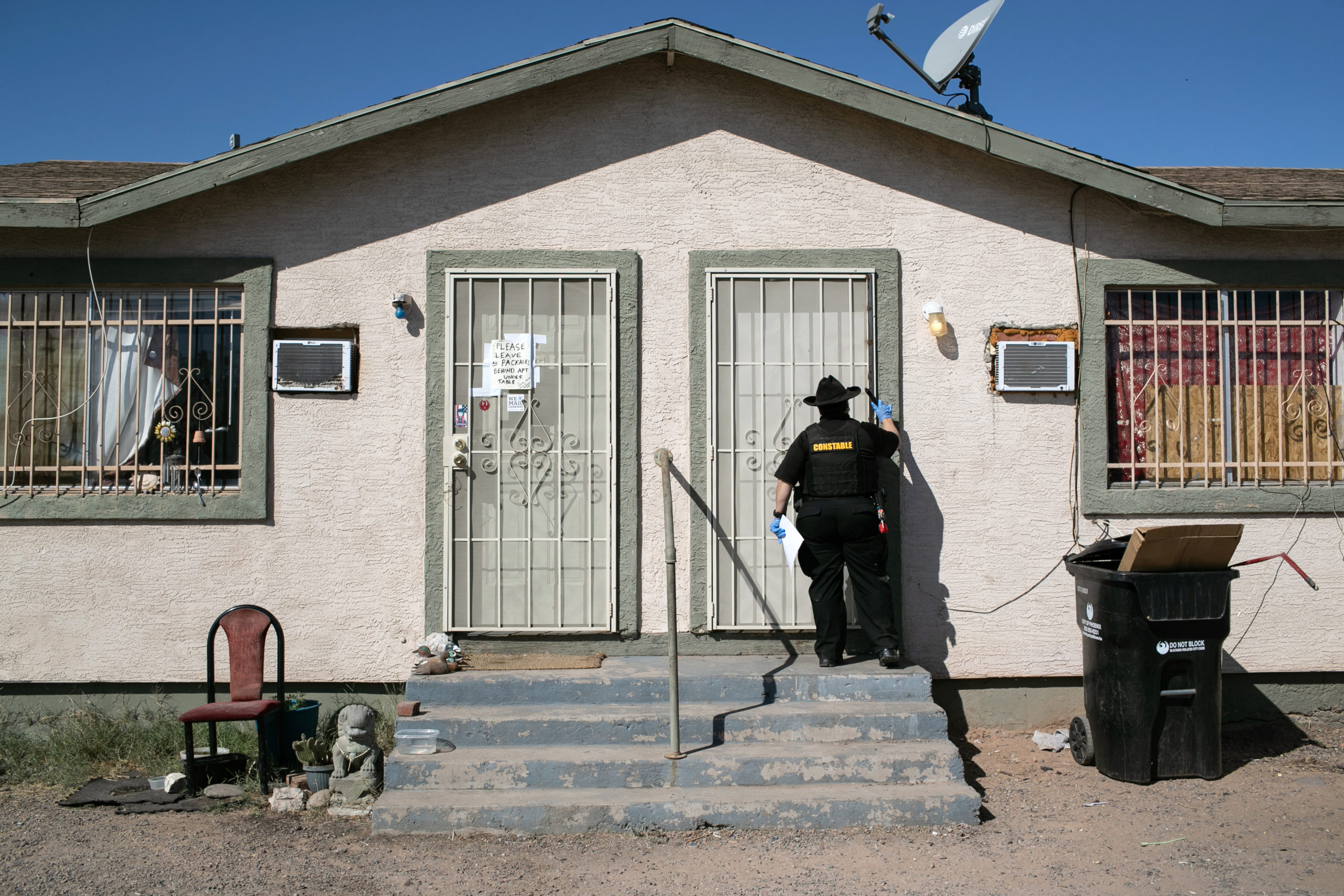 PHOENIX, ARIZONA – OCTOBER 01: Maricopa County constable Darlene Martinez knocks on a door before posting an eviction order on October 1, 2020 in Phoenix, Arizona.  (Photo by John Moore/Getty Images)The incident caused a nearby elementary school to go into lockdown, according to ABC13.

The prospect of increasing numbers of people facing evictions was a reason given by Independent Vermont Sen. Bernie Sanders for President Trump to sign the COVID-19 aid package that Congress passed in December 2020 that included $600 checks for individuals. Sanders said that Trump could renegotiate after the package passed to get his desired $2,000 checks.

New York passed a law on December 29, 2020, that bans evictions for two months.