Members of the Women’s Alliance Against Violence, an initiative of the Thomas More Society legal firm, filed a lawsuit Tuesday in the United States District Court of the Northern District of New York challenging Democratic New York Gov. Andrew Cuomo and other New York officials.

The lawsuit alleges that the Reproductive Health Act (RHA) “violates the fundamental rights of women, viable unborn children, and children surviving attempted abortions” and “ignores the humanity of unborn children by decriminalizing the killing of a child in utero by any third party.” (RELATED: World Trade Center Lit Up In Pink To Celebrate Abortion Bill)

The RHA, which Cuomo signed into law in January 2019, not only removed abortion from New York’s criminal code but also allowed non-doctors to perform abortions and allowed women to obtain late-term abortions if their health is in danger or if their unborn baby is not viable. Cuomo also ordered that the One World Trade Center glow pink the night he signed the bill to celebrate the RHA’s passage.

The lawsuit accuses New York officials of altering “nearly two hundred years of penal law.” The lawsuit says “a murderer can no longer be prosecuted under New York law for the killing of a wanted, viable unborn child” since the RHA amended the definition of homicide to mean “the death of a person” rather than “the death of a person or an unborn child with which a female has been pregnant for more than twenty four weeks.”

“These changes in New York law, introduced by the RHA, put women in danger,” the lawsuit said. Cuomo’s office has not responded to requests for comment from the Daily Caller News Foundation. 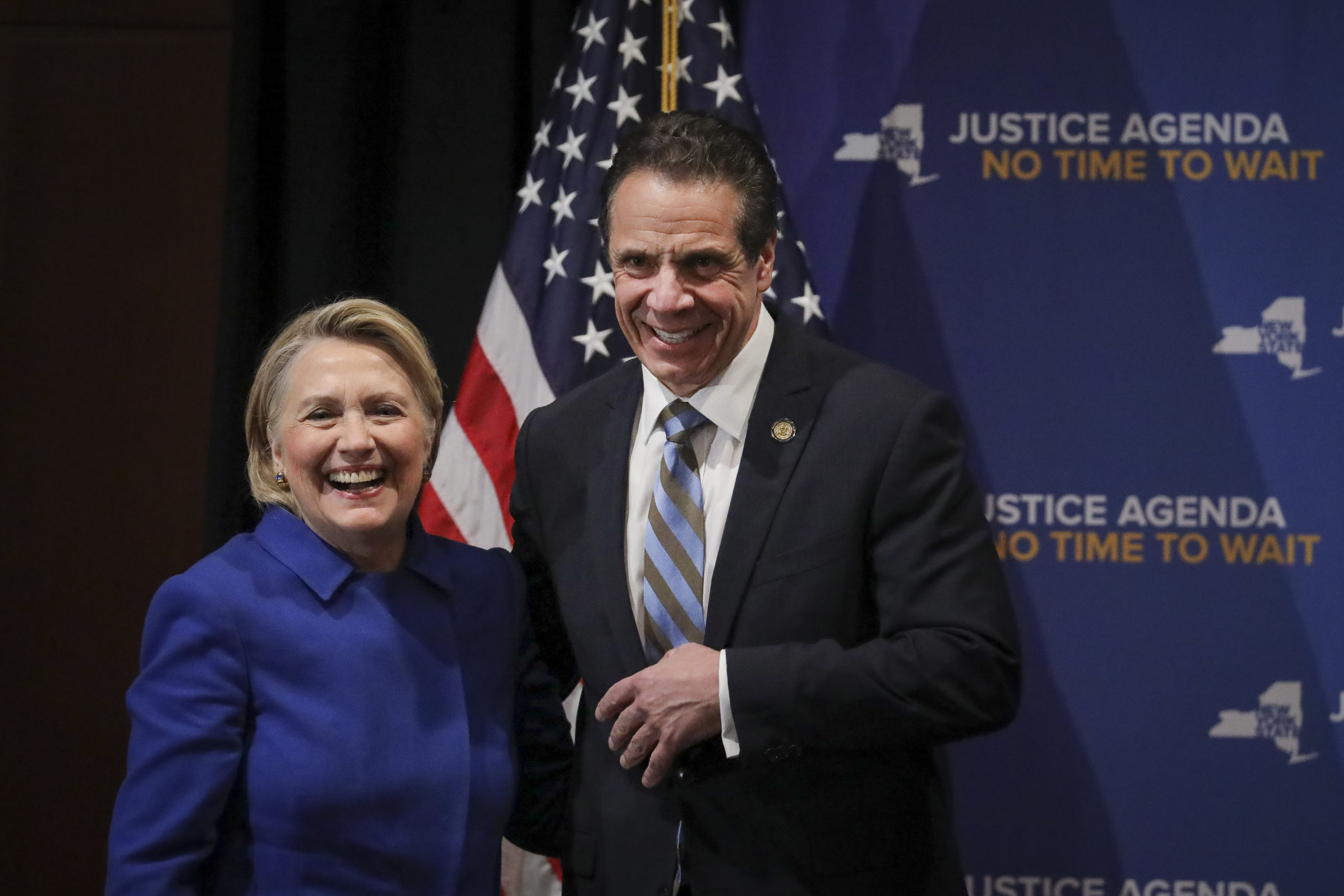 Former Secretary of State Hillary Clinton and New York Governor Andrew Cuomo share the stage to promote the Reproductive Health Act in New York, which Cuomo wants the State Legislature to pass in their first 30 days. Under New York’s current law, abortions after 24 weeks are illegal unless its necessary to save the woman’s life. (Drew Angerer/Getty Images)

Counsel Christen E. Civiletto told the DCNF that the RHA eliminated “all criminal penalties for the death of an unborn child,” and legalized abortions for virtually any reason throughout pregnancy, thereby exacerbating women’s vulnerability to their partner’s “coercion, abuse, or threats to abort throughout the entire nine months of pregnancy.”

“There’s no longer a separate murder charge for the killing of even a wanted, near-term child,” Civiletto said. “This change not only deprives women of justice, but also escalates the threat of harm. There’s no longer a deterrent.” (RELATED: Critics Portray Pro-Life Advocates As Racists. The Founder Of Planned Parenthood Had A History Pro-Eugenics Comments And Targeting Black Communities)

CNN reported in 2003 that an eight-month-pregnant woman, Teresa Keeler, was attacked by her ex-husband, Robert Keeler, in 1969 near Stockton, California. Robert Keeler blocked the path of his ex-wife’s car and asked her if she was expecting her new lover’s baby. When Teresa Keeler ignored the question, her ex-husband pulled out of the car, said, “I’m going to stomp it out of you,” kneed her in the stomach, and beat her unconscious, according to CNN.

Teresa Keeler delivered a stillborn baby girl with a severely fractured head in the hospital, the publication reported — but the California Supreme Court later ruled in the case that Robert Keeler could not be charged with the murder of “Baby Girl Vogt” on the premise that a fetus is not a human being and thus cannot be murdered.

The justices noted that only someone “born alive” could be killed, CNN reported. The case sparked a backlash among the public and the California state legislature later amended its murder statute to include the killing of an unborn baby. The California Supreme Court eventually ruled that murder charges only apply to unborn babies older than seven weeks, according to CNN.

The question of how to charge those who kill an unborn baby has continued to come up in courts of law since then. (RELATED: Unsealed Invoices Show Planned Parenthood Billed A Tissue Company Nearly $25K For Fetal Body Parts)

“There are numerous cases where women have died or been injured during abortions performed by unqualified and untrained clinic staff,” Americans United for Life President Catherine Glenn Foster, counsel to the Women’s Alliance Against Violence, said in a statement provided to the DCNF. “National studies of abortion facility conditions reveal hundreds of significant violations of state laws regulating abortion facilities, with many reports of abortions performed by people with almost no medical training.”

The lawsuit particularly takes issue with the RHA’s redefining of the term “person” when referring to the victim of a homicide as a “human being who has been born and is alive.”

“There is now no legal difference in the criminal law between an attack on a pregnant woman that results in the death of her unborn child, and an attack on a woman who is not pregnant,” the lawsuit filed Tuesday said. “In other words, there is no separate charge based on the death of the child.”

The lawsuit argued that “the State has ‘affirmatively enhance[d] the risk of violence’ against pregnant women seeking to continue their pregnancy to term, their viable unborn children, and children surviving abortions attempted after the twentieth week of pregnancy.” The state has done this, the lawsuit argued, by both removing legal sanctions for fetal homicide and removing the second physician requirement for abortions after twenty weeks.