Separated for almost seven decades, high school sweethearts from a small town in Canada reconnected last summer during the coronavirus pandemic and are now married.

Fred Paul and Florence Harvey were teenagers 68 years ago when they first fell in love, according to a CNN. They lived across the bay from each other in Wandsworth in the Canadian province of Newfoundland and Labrador. 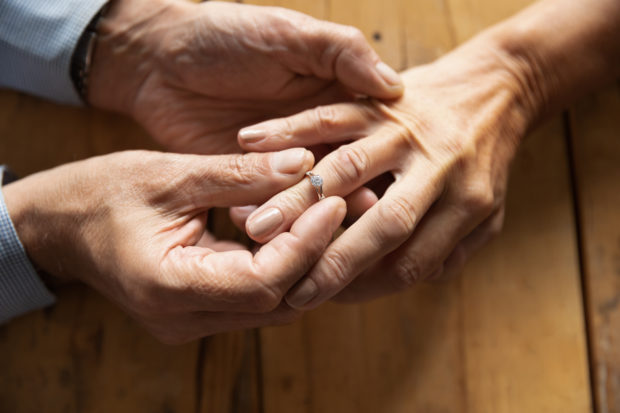 Florence Harvey and Fred Paul were high school sweethearts. Nearly seven decades later, they married — not the couple written about (Photo by fizkes/Shutterstock)

“She was my first love,” said Paul, now 84, on the CNN interview posted on the Facebook page of Breakfast Television Toronto. “My first girlfriend and my first true love.”

Together two years, they split when Paul turned 18 and graduated from high school. He moved to Toronto seeking work. Harvey was 15 at the time and also moved away by the time Harvey returned to Wandsworth looking for her just a year later, CNN reported.

Both went on to marry other people and raised families. Harvey’s husband died from cancer in 2017. And two years later when she learned Paul’s wife had passed, she reached out to provide words of support about losing his spouse.

“I never thought it would go past that,” Harvey, 81, told CNN. “But we went from talking once a week, to twice, to three times, to every day for hours. We had really reconnected even though we hadn’t seen each other in all those years. I knew this was it.”

Three days later, they were ready to tie the knot and were married on August 8 in a small ceremony due to the pandemic. (RELATED: Loneliness Increasing Among Older Americans, Says AARP Study)