Twitter users falsely identified a retired Chicago firefighter as the Capitol rioter who threw a fire extinguisher, according to multiple reports.

David Quintavalle was not even in the Washington, D.C., metropolitan area during the riot, his attorney told Patch. That didn’t stop social media users, including Washington Post contributor Holly Figueroa O’Reilly, from suggesting that Quintavalle threw a fire extinguisher at police offers. 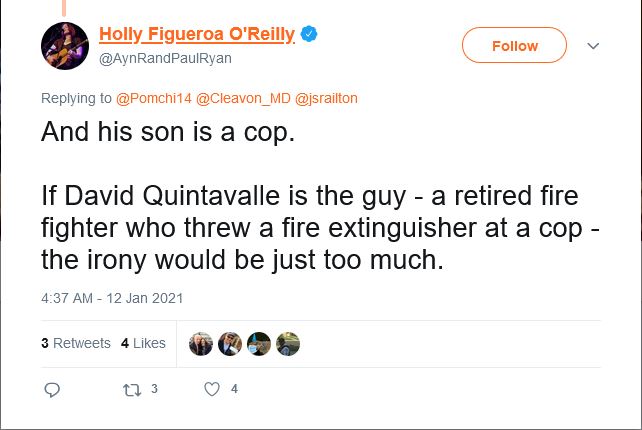 “Social media has killed David Quintavalle. This has been an absolute disaster to him personally and his family,” said John Nisivaco, who is representing Quintavalle. Nisivaco presented receipts from local stores Home Depot and Aldi to the FBI to confirm that Quintavalle was in the Chicago area during the riots, he told Patch.

Nisivaco did not respond to a request for comment from the Daily Caller.

Quintavalle has reportedly faced sustained harassment at his home despite being cleared of wrongdoing.

After the false claims he was involved in the riot, David Quintavalle received angry calls calling him a “fucking murderer,” TV crews staked out his house & police dispatched a patrol car to keep watch.

Yet posts accusing him remain all over Twitter. https://t.co/pF7m46ylmi pic.twitter.com/pQ1OSd7xH6

Police ultimately arrested Robert Sanford on Jan. 14 for throwing the fire extinguisher and injuring police officer William Young, CNN reported. At least 80 others have been arrested for their participation in the riots. (RELATED: Two Off-Duty Cops Charged In Capitol Riots; One Allegedly Bragged He ‘Attacked The Government’)

The police investigation into the death of Capitol Police Officer Brian Sicknick, who succumbed to injuries he suffered while “physically engaging with protesters,” is ongoing.