The U.S. scientist behind an effort to stymie debate surrounding the possibility that COVID-19 could have accidentally escaped from the Wuhan Institute of Virology admitted through a spokesman that he did so to protect Chinese scientists from online criticism.

Dr. Peter Daszak, the president of the New York-based EcoHealth Alliance, orchestrated a statement published in The Lancet medical journal in February, prior to any serious research on the origins of COVID-19, condemning “conspiracy theories” that suggest the virus doesn’t have a natural origin.

Daszak has worked directly with scientists at the Wuhan Institute of Virology, which was studying bat-based coronaviruses prior to the outbreak of COVID-19, and he allegedly played an influential role in directing two taxpayer-funded grants from the National Institute of Health to the Chinese research center.

An email obtained by U.S. Right to Know, an investigative research group, shows that Daszak worked to significantly broaden a line in the draft version of the statement that had condemned the conspiracy theory that COVID-19 was a Chinese manufactured bio-weapon.

“I think this is a bit too specific, because there are other conspiracy theories out there,” Daszak said in the Feb. 6, 2020, email. “Our current statement neatly refutes most of them by saying that ‘We stand together to strongly condemn conspiracy theories suggesting that 2019-nCoV does not have a natural origin. Scientific evidence overwhelmingly suggests that this virus originated in wildlife, as have many other emerging diseases.”

A spokesman for Daszak told The Wall Street Journal on Friday that his statement, which was cited by numerous news outlets — and by fact check organizations to censor unwelcome inquiries — during the onset of the pandemic, was meant to protect Chinese scientists.

“The Lancet letter was written during a time in which Chinese scientists were receiving death threats and the letter was intended as a showing of support for them as they were caught between important work trying to stop an outbreak and the crush of online harassment,” Daszak’s spokesman told The Journal.

Daszak did not respond to the Daily Caller News Foundation when asked if he maintains that there is no possibility that COVID-19 could have been released into the human population due to an accidental lab release.

The World Health Organization appointed Daszak to a 10-person panel that began investigating the origins on the ground in China on Thursday. Independent experts have criticized Daszak’s inclusion on the panel due to his prior connections with the WIV.

“The independence of the WHO investigation may be seriously compromised by the processed used to choose investigators … In particular, the choice of Dr. Daszak, who has a personal stake in ensuring current Chinese practices continue and who is a longtime collaborator of a scientist at the center of the investigation, is likely to taint its results,” said Miles Pomper, a fellow at the James Martin Center for Nonproliferation Studies.

The State Department announced on Friday that it has obtained evidence showing that researchers at the WIV became sick with flu-like symptoms in Fall 2019 prior to the first known cases of COVID-19, raising concerns of an accidental lab leak.

“The U.S. government has reason to believe that several researchers inside the WIV became sick in autumn 2019, before the first identified case of the outbreak, with symptoms consistent with both COVID-19 and common seasonal illnesses,” the State Department said. (RELATED: US Has Evidence Researchers In Wuhan Lab Fell Ill Before Coronavirus Outbreak, State Department Says) 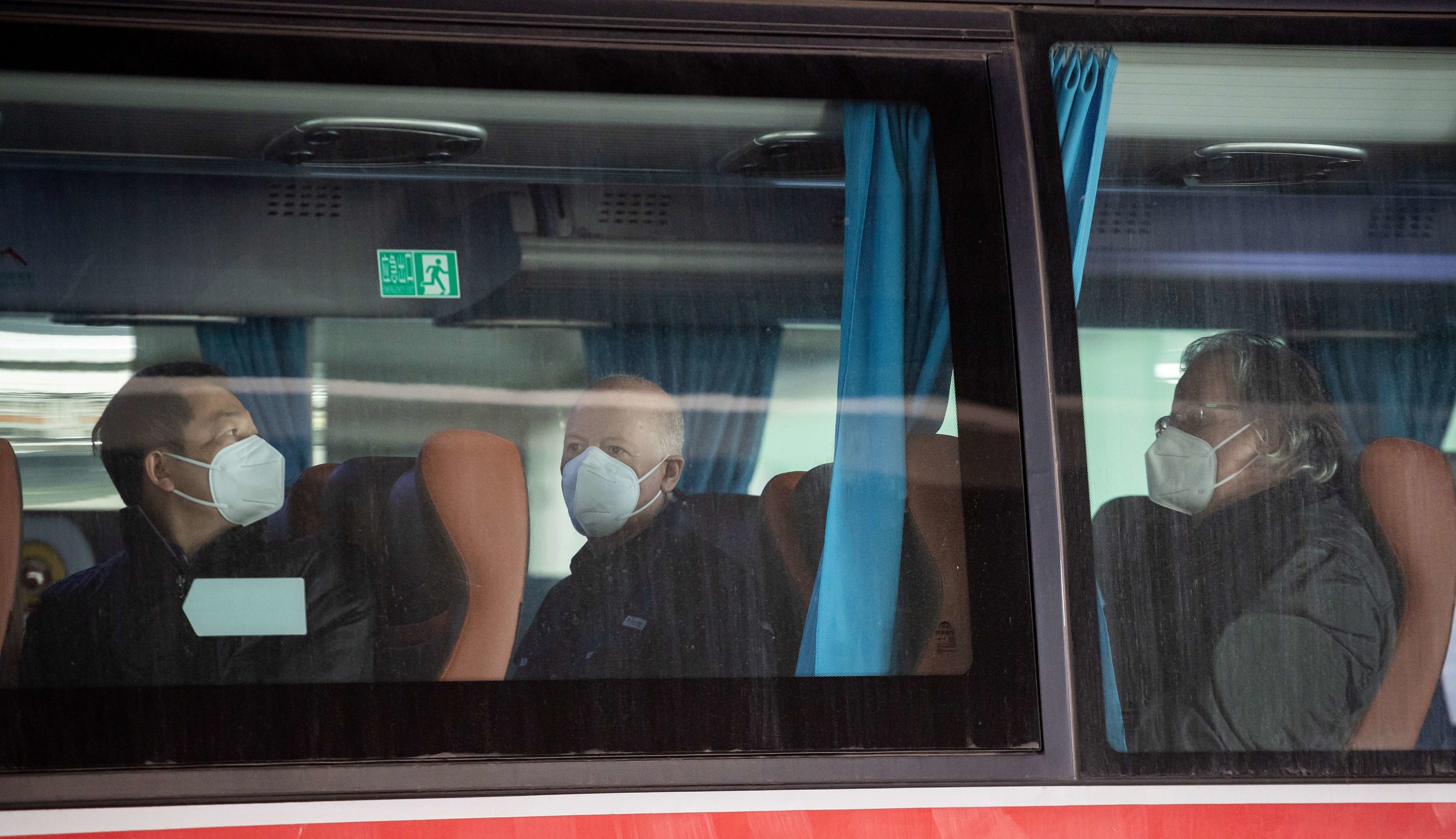 Members of the World Health Organization (WHO) team, including Peter Daszak (C) and Hung Nguyen (L), investigating the origins of the Covid-19 pandemic, board a bus following their arrival at a cordoned-off section in the international arrivals area at the airport in Wuhan on January 14, 2021. (NICOLAS ASFOURI/AFP via Getty Images)

WIV researcher Shi Zhengli, who is known by her colleagues as the “bat woman,” told the Scientific American in March that she lost sleep worrying that the virus could have leaked from the lab when she first learned of the outbreak in December.

The State Department said Friday that it finds it suspect that Zhengli now says there were “zero” coronavirus infections among staff and students at the WIV.

Dr. Maceij Boni, a professor of biology at Pennsylvania State University, told The Journal on Friday that it would be “positive evidence” pointing to the theory that COVID-19 leaked from the WIV lab if its employees became infected with the virus prior to its outbreak into the general population.