Media outlets and news personalities have made a number of major mistakes throughout the time that President Donald Trump has served in the White House.

Publications such as the New York Times, CNN, and Politico inaccurately portrayed conversations, the state of the president’s finances, his dealings with Russia (or lack thereof), and a variety of other facts about the president throughout the last four years. (RELATED: We’re Naming And Shaming The Absolutely Worst Reporters On The Russian Collusion Conspiracy Theory)

Most notably, many media figures pushed the narrative that Trump and members of his campaign colluded with Russians to influence the 2016 election, though special counsel Robert Mueller’s investigation found no evidence to establish that is true. 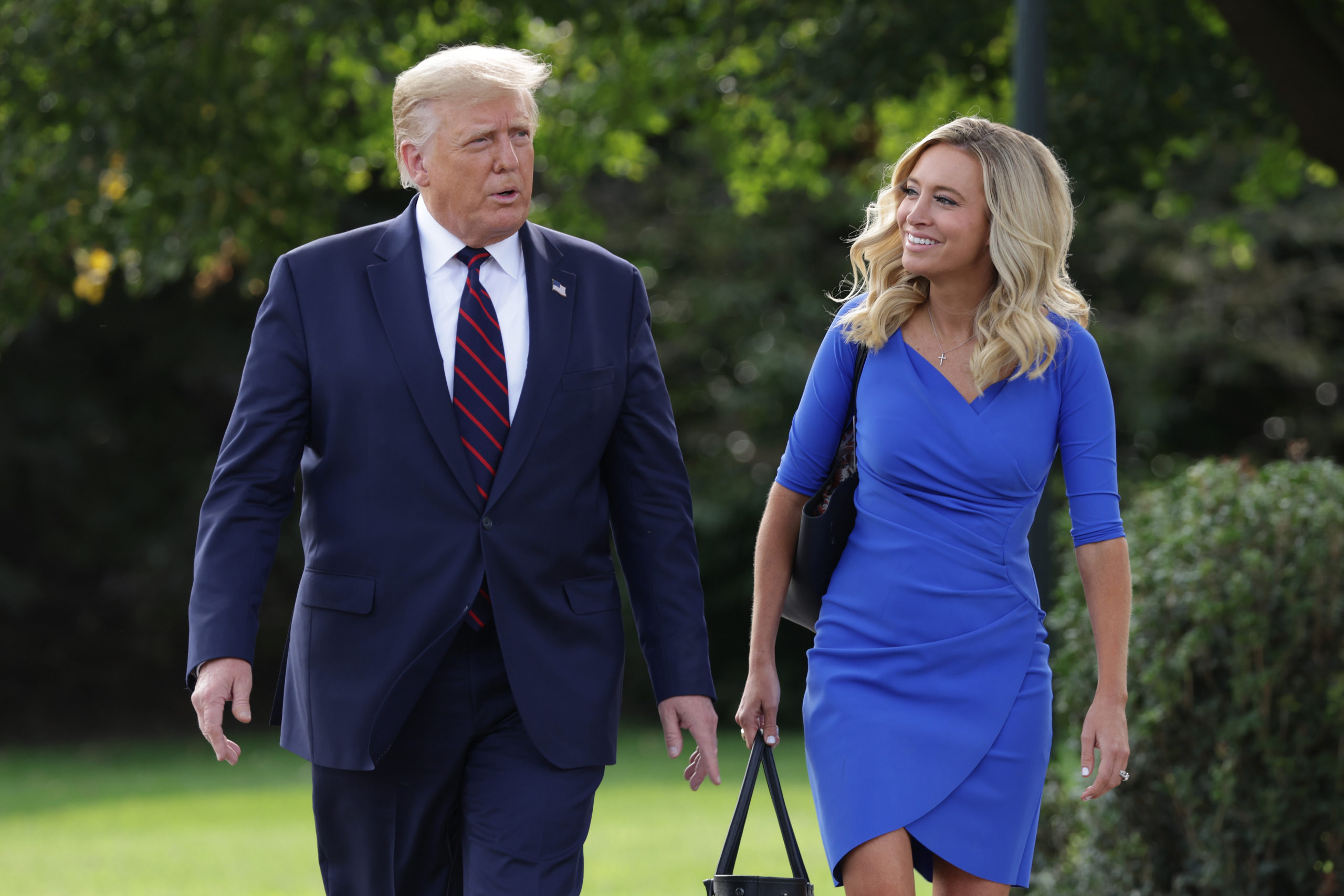 U.S. President Donald Trump and White House Press Secretary Kayleigh McEnany walk toward members of the press prior to Trump’s departure from the White House on September 15, 2020 in Washington, DC.  (Alex Wong/Getty Images)

Multiple publications, including the New York Post and Politico, were forced to correct inaccurate August 2016 reports that First Lady Melania Trump had violated her visa status based on photographs taken during her modeling career. (RELATED: Melania Trump: I Didn’t Break Any Immigration Laws)

In November 2016, USA Today also inaccurately reported the date that Melania Trump arrived in the U.S. from Slovenia as outlets again questioned her immigration status, and the UK Telegraph issued an entire story apologizing for a number of falsehoods about the first lady in a January 2019 story.

In January 2017, CNBC’s John Harwood inaccurately tweeted that the Justice Department had no input on the president’s executive immigration order on immigration and refugees — but CNN would report merely a few days later that the DOJ had, in fact, approved the executive order.

Multiple publications, including the Associated Press, reported in February 2017 that Trump threatened former Mexican president Enrique Peña Nieto with an invasion to take care of “bad hombres.” Mexico denied that Trump’s remarks were meant as threats.  The Washington Post would later publish a transcript of the call showing that Trump offered to assist Mexico in getting rid of drug lords.

During a May 2018 White House press briefing, Trump referred to MS-13 gang members as “animals” — a statement that the media quickly took out of context. The New York Times, the Washington Post, and ABC News all reported that Trump had called all asylum seekers animals, and confusion around the president’s statements about MS-13 circulated as recently as April 2020.

Pres. Trump refers to some who cross the border illegally as ‘animals,’ not people. “You wouldn’t believe how bad these people are.”

The president was holding a roundtable discussion with California elected officials who oppose the state’s sanctuary law. https://t.co/YfrZxC89CB pic.twitter.com/uvhKp9vwrO

The New York Times was forced to issue a correction after it overlooked 4,500 attendees at Trump’s May 2018 rally in Tennessee, Fox News reported. The Times reported that only 1,000 people attended the rally, though the local fire marshal’s office estimated about 5,5000 attended.

This episode was repeated in July 2019 when the Guardian reported that the White House was “struggling” to draw crowds for the president’s Fourth of July celebration. Photos of the event, which took place on a rainy day, show the National Mall covered in attendees.

Media were quick to trust the allegations of Christine Blasey Ford, who accused Supreme Court Justice Brett Kavanaugh of sexual assault in September 2018. Ford said that Kavanaugh’s high school friend Mark Judge was in the room when Kavanaugh allegedly assaulted her, and the New York Times falsely reported that Judge remembered the incident.

“I never saw Brett act that way,” he said. The Times was forced to correct the article.

Times reporters Robin Pogrebin and Kate Kelly also wrote an essay in September 2019 referencing their new book that included a new allegation against Kavanaugh, but the authors failed to mention that the alleged victim did not remember the incident. After backlash, the Times later added a note stating that the “book reports that the female student declined to be interviewed and friends say that she does not recall the incident.”

Media falsely reported on a number of occasions that President Donald Trump did not visit U.S. troops. NBC News reported in December 2018 that Trump had become the first president to fail to visit the troops at Christmastime — though Trump and Melania Trump had done so. The publication later added a note clarifying that Trump had visited the troops.

Newsweek falsely reported in November 2019 that Trump spent Thanksgiving golfing at his resort in Florida when the president was visiting U.S. troops in Afghanistan. Newsweek reportedly fired the reporter, Jessica Kwong, who wrote this story.

Obama White House photographer Pete Souza also spread a conspiracy theory in October 2019 that Trump was golfing instead of present in the Situation Room when the U.S. conducted a raid against Abu Bakr al-Baghdadi. Souza later corrected himself, but would not delete his tweet, which garnered over 20,000 retweets and 50,000 likes.

A number of news outlets apologized for participating in mischaracterizing teenaged supporters of President Donald Trump at the March for Life who got into a confrontation with an anti-Trump activist. The New York Times and the Washington Post also issued corrections after they falsely reported that the anti-Trump activist was a Vietnam veteran. (RELATED: Here’s A List Of Fake Hate Crimes Involving Nooses)

The Washington Post and CNN both settled with one of the teenagers, Nicholas Sandmann.

The Post was the second organization to settle with Sandmann after he was widely misrepresented in the media as having mocked a Native American protester at the Lincoln Memorial in 2019. CNN paid out a settlement as well, though the amount of either settlement is unknown.

Actor Jussie Smollett is engaged in a legal battle over his alleged hate crime hoax, which occurred in January 2019. He claims that he was attacked by Trump supporters who shouted racial slurs at him and told him its “MAGA” country. CNN, Vanity Fair, the Washington Post, and several other outlets reported Smollett’s accusations with little skepticism and a number of reporters personally backed the actor’s account on social media.

Smollett was later indicted on 16 felony counts after allegedly lying to authorities about being the victim of a racist hate crime and filing a false report, but prosecutors unexpectedly dropped the charges.

Media and politicians spread the falsehood that Trump called the coronavirus itself a “hoax” in February. The Daily Caller’s Check Your Fact traced this to a Politico headline reading “Trump rallies his base to treat coronavirus as a ‘hoax’”.

Multiple fact checks, such as The Associated Press, CNN, BBC and Annenberg Public Policy Center, have since confirmed that the president never called the coronavirus a “hoax.”

The New York Times would later issue a correction in March after the publication falsely reported that the United States only had 200,000 ventilators on hand and would need a million more. The correction came amidst widespread panic over the virus as the country began to lockdown.

“An earlier version of this article referred imprecisely to a study’s estimated needs for ventilators for across the country,” the correction said. “The study, by the Society of Critical Care Medicine, projected that there may be as many as one million people in the United States who need treatment with a ventilator over the course of the pandemic, not that the U.S. will need 1 million ventilators over the course of the pandemic.”

“It was an editing mistake. We took immediate steps to remove it from all platforms and shows,” a CBS spokesperson said in a statement to the Daily Caller on March 30.

CBS also aired viral footage of a woman crying and claiming to be a nurse who quit her job because there were not enough masks for staff. After the nurse’s story began to fall apart, the nurse clarified to CBS that the nurses did have masks.

Media Reporting On Links Between Trump And Russia

Establishment media has downplayed the Department of Justice inspector general’s report finding that the FBI made dozens of significant errors during its investigation, though media has highlighted that the FBI was unbiased in opening the investigation. Special counsel Robert Mueller found no evidence supporting claims that Trump or his campaign colluded with Russians to influence the 2016 election. (RELATED: Here’s What Mueller Found (Or Didn’t Find) On Collusion)

CNN misreported key details of an offer of stolen Wikileaks documents made to Donald Trump Jr. in 2017. CNN’s Jim Sciutto and many other journalists have also strongly defended the infamous Steele dossier and asserted repeatedly that the FBI verified key parts of the Steel dossier, emphasizing that the FBI would not have used the dossier to wiretap Carter Page — though the DOJ watchdog found 17 “significant” errors in the FBI’s handling of the document.

MSNBC host Rachel Maddow spent more time on the collusion narrative than any other issue, The Intercept reported, devoting 53% of her broadcast time between Feb. 20 and March 31, 2017 to Russia coverage. When she found that Mueller was not indicting the president or his family, she was seen to be holding back tears during her opening monologue. She dropped half a million viewers during the week after the Mueller report was released, the Daily Beast reported.