The Army has launched an investigation after the unmasking of a semi-anonymous Twitter account the command sergeant major of U.S. Military Academy, West Point, allegedly used to criticize elected officials and former President Donald Trump, an Army official confirmed to the Daily Caller.

Sergeant Maj. Michael J. Coffey serves as the Command Sergeant Major at West Point, a position he has held since August 2020. He described his job as taking “responsibility for the professional development of non-commissioned officers to help with the management of enlisted Soldiers.”

In response to a tweet from Vice President Kamala Harris, a Twitter account with the handle @mjcoff02 going by “Michael J.” posted, “As a service member with 28 years active duty and multiple combat deployments, I spent every day wondering what my Commander in Chief would do to me and my unit. I have not slept well for the last 4 years. I’m sleeping soundly tonight.”

Another user got in a lengthy back and forth with @mjcoff02, identifying him multiple times as former command sergeant major of the Army’s Third Infantry Division (3rd ID) and as current senior enlisted at West Point. Shortly following the identifying tweets, “Michael J.” deleted his account. Previously visible on the account was the bio, “Grandfather, father, soldier,” and the date the account was made, August 2020, which is the same month Coffey took over as senior enlisted at West Point.

At publishing time, the only visible note on Coffey’s Facebook bio is that he’s done “28 years” of service. Coffey enlisted in January 1994, his official bio says, which would make this year the beginning of his 27th year.

This asshole is senior enlisted at WEST POINT! Write your congressmen and congress women to ask for his removal. We clearly see you have political bias. And you’re using your political bias while teaching our young soldiers. Youre fucked. Sleep tight Sergeant Major

Before the account was deleted, it sniped Republican officials closely associated with Trump. One such tweet, directed at then-Secretary of State Mike Pompeo, suggested that Trump’s picture should be featured alongside that of Ayatollah Khamenei and other Iranian leaders as a threat to the United States and Israel. 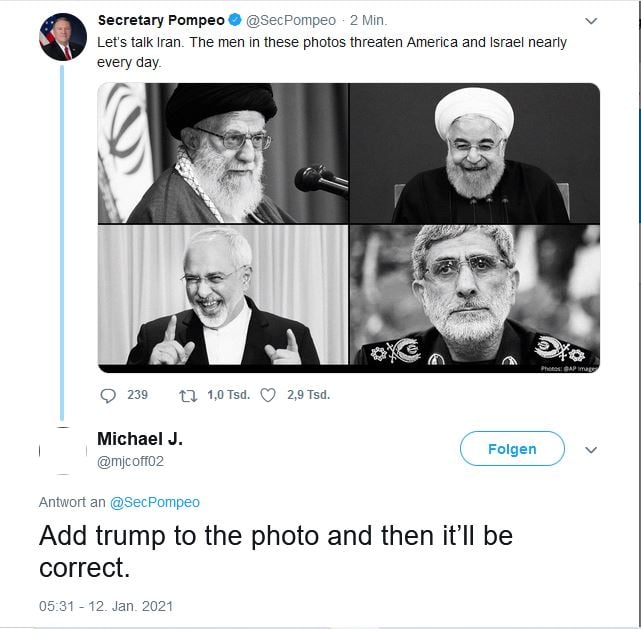 “West Point takes all allegations of impropriety seriously and will conduct a thorough investigation into this matter,” Army Lt. Col. Christopher Ophardt, Director of Public Affairs and Communications at the U.S. Military Academy, told the Daily Caller.

The conduct of enlisted service members like Coffey is governed by the Uniform Code of Military Justice (UCMJ). In particular, Article 134 of the UCMJ requires “disorders and neglects to the prejudice of good order and discipline in the armed forces, all conduct of a nature to bring discredit upon the armed forces, and crimes and offenses not capital” to be adjudicated by “a general, special, or summary court-martial.”

Article 134’s paragraph 89 specifically precludes “indecent language” that causes the “prejudice of good order and discipline in the armed forces or was of a nature to bring discredit upon the armed forces.”  Tweets like these may fall under that regulation, since the United States government has a vested interested in maintaining “public perception of the military as an apolitical organization,” according to an article in the Washington University Jurisprudence Review written by Army Judge Advocate Elliott Hughes.