The frequent argument between 9 mm Luger and .40 S&W is often ended with the interjection of “.45 ACP.” And while that would seem to end the discussion for some, the most typical counterargument is, “Well, what about capacity?” Seeking the final word on the discussion, Armscor developed the Rock Island Armory BBR 3.10 sub-compact pistol. This recoil-operated semi-automatic pistol delivers the best of both worlds, as it gets its name from its compact 3.10″ barrel and its 10-round capacity of hard-hitting .45 ACP cartridges.

The BBR 3.10 is modeled after a 70-series M1911. It retains traditional M1911 features such as a thumb safety located on the left side of the frame, as well as a grip safety mounted above the mainspring housing. Despite its short 6.94″ length and 4.5″ height, the pistol still has quite a bit of heft to it—weighing in at 33.4 ozs. empty, as both the slide and frame are constructed of 4140 steel.

Unlike the typical M1911, Rock Island’s new pistol feeds from a double-stack detachable box magazine that can be dropped via a push-button magazine release found in the traditional location behind and below the trigger. Due to the additional width of its magazine, the grip of the BBR 3.10 is also significantly wider than on a standard M1911. Our test pistol measured 1.46″ wide, which may be a bit too broad for some with smaller hands to get a solid purchase on.

Despite its small size, the BBR 3.10’s construction is straightforward for an M1911-style pistol. Note the flared, bushingless barrel, the nested recoil spring assembly and the recoil spring reverse plug.

–
With this in mind, Armscor deployed several features that help users to either establish a firm grip on the gun or reduce the .45’s felt recoil. Chief among these are three ports that have been drilled through the barrel and the slide at the muzzle’s 12-o’clock position. This system uses the escaping high-pressure gases to counteract the muzzle’s climb and to help the shooter quickly return to target. In addition, the BBR 3.10 ships with G10 stocks that are cut with a combination of stippling and serrations to help root the pistol in the shooter’s hands during recoil. Lastly, the frontstrap and backstrap are both cut with aggressive checkering that creates 360 degrees of texturing around the grip to help enhance controllability.

While the frame is built with grip in mind, the slide of the new Rock Island pistol is exceptionally smooth— the only exception, of course, being the rear cocking serrations. Before final assembly, all exterior surfaces are Parkerized to resist the corrosion and abrasion associated with everyday carry. The rear sight is a two-white-dot, adjustable MPS2-style unit, while the front sight is a drift-adjustable black post.

(l.) Ports in the BBR 3.10’s barrel correspond with those in the top of its slide, and serve to mitigate the diminutive gun’s muzzle flip. (r.) Despite the short height of the BBR 3.10’s magazine (far r.), it holds three more rounds than that of a standard M1911.

–
Function testing took place outdoors at a 7-yd. range, using a variety of bullet weights and profiles. The BBR 3.10 is built with a brilliantly polished feed ramp, and it cycled everything we fed it with 100 percent reliability, including the unconventionally shaped HoneyBadger ammunition from Black Hills. Out of the box, it shot a few inches low, but we were able to bring the point of impact up to coincide with the point of aim thanks to the adjustable rear sight.

Both accuracy and controllability exceeded our expectations, with groups as small as 0.88″ at 7 yds. This is largely the result of the BBR 3.10’s bushingless bull barrel system that provides the same stability and lock-up from shot to shot. The skeletonized trigger contributed to the fine results as well, as it broke without much creep at an average pull weight of 5 lbs., 11 ozs., and is adjustable for overtravel. Trigger reset was only 1/8″, making hammered pairs exceptionally fast for such a small gun chambered in .45 ACP.

The hammer of the BBR 3.10 is also skeletonized—reducing lock time and minimizing the effect that shooter error can have on shot placement. Overall, flinching should be minimal, as the extended beavertail ensures a comfortable shooting experience that is free of “hammer bite.” Although accurate with an array of ammunition, it is best to select rounds that are not dependent on high velocities for expansion, as the reduced barrel length of the 3.10 does limit the velocities that it can attain. We confirmed this both by the numbers on the chronograph and by observing the pile of unburnt powder that fell to the ground forward of our rest.

Before leaving the range, we disassembled the pistol to give it a wipe with CLP and to further examine the interior. Disassembly is exactly what could be expected from a bushingless M1911. The BBR utilizes a dual-spring system to help elongate and smooth the recoil pulse—making it more controllable—with a smaller-diameter recoil spring wrapping around the guide rod and a larger-diameter spring encircling the recoil spring sleeve. 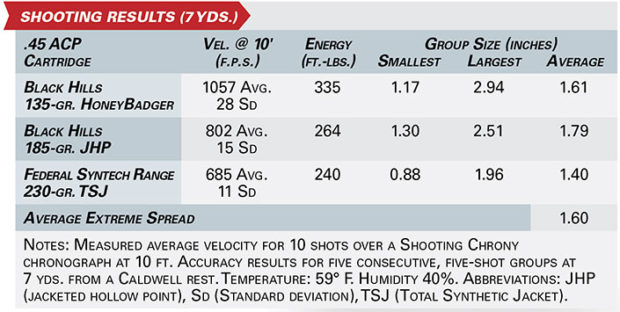 –
Overall, our experience with the Rock Island BBR 3.10 was quite favorable, but those with small to medium hands will likely struggle with its extra-wide grip. We found it to be a little too wide for comfortable IWB carry, and we defaulted to OWB for our lifestyle analysis. Thick clothing helped prevent printing, making this a potent choice for cold-weather personal protection. Regardless of your concealment methods, there is something to be said for the confidence inspired by carrying a steel pistol with a double-digit count of man-stopping .45 ACP ammunition—and, of the few such options on the market today, the Rock Island BBR 3.10 is among the least expensive and the most compact available. 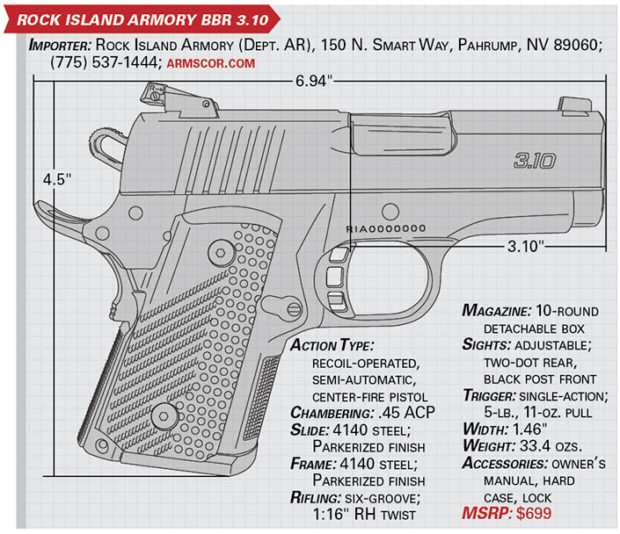 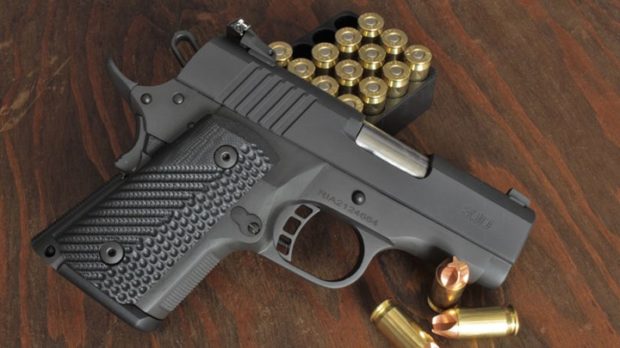