Chassis-stocked rifles offer a bevy of advantages that recommend their usage for precision long-range shooting pursuits. And during the past five years, in a race to tap into this thriving segment of the market, essentially every maker of center-fire bolt-action rifles has developed a chassis system into which their legacy turnbolt actions could be incorporated. An adaptation of the same action it has used in previous bolt-action designs, the Performance Center Long Range Rifle (LRR) is Thompson/Center’s application of this concept. And to the company’s credit, it has done so at a price point that undercuts most of its competition by a fair margin, while offering comparable features and performance.

A two-chamber muzzle brake, threaded 5/8×24 TPI, is screwed onto the T/C Performance Center LRR’s 24″-long, fluted barrel and helps to reduce felt recoil, allowing the shooter to get back on target quickly—especially with relatively mild cartridges such as the 6.5 mm Creedmoor.
–

The LRR can be had in .308 Win., 6.5 mm Creedmoor and .243 Win., and with either a black or flat dark earth corrosion-resistant Weather Shield exterior coating on its chassis. Given both the name of the gun and its probable end use, we felt the ballistically superior Creedmoor was the natural choice of chambering for this evaluation, and a black test sample was acquired from T/C.

With an unaccessorized weight of 11 lbs., 8 ozs., the LRR is a heavy gun—even by precision bolt-action standards. The test sample came from the box in its most compact configuration, with a total length of 44 5⁄8″ and a length of pull (LOP) of 13 ¼”, although the design of the stock allows both measurements to be tweaked by up to 1.25″ in order to best suit the dimensions of the shooter.

The LRR’s action is a push-feed system with a full-diameter, three-lug bolt housed within a round-bodied 4140 steel receiver. Although no interior bolt raceways are present inside the receiver, a lateral cut machined into the 9-o’clock surface of the bolt engages the receiver’s left-side bolt stop to provide stability and to facilitate a smooth stroke. The bolt cocks upon opening, and a tail at its rear protrudes about 1/4″ to serve as a visual cocking indicator; chamber extraction is by way of a sliding-plate extractor located within the bolt’s 10-o’clock lug, and ejection is via a plunger-style unit at the 2-o’clock position on the bolt face.

Affixed to the top of the receiver by four hex screws is a 6.5″ (16-slot) segment of 20-m.o.a.-canted Picatinny rail to provide extra elevation for particularly distant targets. Given the height of this rail over the receiver, and the action’s short 60-degree bolt throw, there was plenty of clearance during testing between the rifle’s bolt knob and the ocular bell of the Leupold VX-6i 3-18X 50 mm riflescope used to conduct accuracy testing.

A sculpted bolt release lever lies just above the stock line on the receiver’s left side (l.). The full-diameter bolt body features a three-lug head that incorporates a sliding-plate extractor and a plunger-style ejector (r.).

–
The 6.5 mm Creedmoor-chambered LRR utilizes a 24″ 4140 steel barrel, button cut with 5R rifling at a 1:8″ twist rate, that comes from Thompson/Center with a two-chamber muzzle brake already installed to its 5/8×24 TPI threaded muzzle. Free-floated its entire length, the heavy-contour barrel has six 16.5″ longitudinal flutes cut into it, beginning 5″ from the receiver and terminating 2″ from the muzzle.

Two action screws, one forward of the magazine well and one nestled between the trigger and the pistol grip, secure the round receiver to the rigid aluminum chassis, a recoil lug extending downward from the former to engage a recess in the latter. The LRR’s chassis provides a plethora of accessory-mounting options, as the 3-, 5-, 6-, 7- and 9-o’clock faces of the integral handguard feature M-Lok-compatible slots. The flat sides and bottom of the fore-end are also conducive to firing the rifle when pressed against a barricade or a sand bag, respectively.

The rifle has a distinctly butt-heavy feel thanks to a detachable stock assembly that, while aluminum like the rest of the chassis, makes use of a lot of steel in how it facilitates its LOP and comb height (CH) adjustments. Two thumbwheels allow the rifle’s LOP and CH to be fine-tuned to the shooter’s preference, however, there are no mechanical stops in place, so the buttpad and cheek piece will continue to extend all the way to the point that they come completely free of the gun. In order to remove the LRR’s bolt from its receiver, the stock must be detached (by simply loosening one pinch bolt) from the rest of the chassis. An AR-pattern pistol grip, with three finger grooves molded into its rubberized exterior surface, completes the rifle’s furniture.

The trigger is a vital component to a successful long-range rifle, and the LRR’s is superb. A single-stage unit with a lever-in-blade design, our sample’s trigger featured a crisp break with zero take-up but a fair amount of overtravel. Company literature claims the trigger’s pull weight is user-adjustable from between 2 lbs., 8 ozs., to 3 lbs., 8 ozs., however, our rifle’s 10-pull average using a trigger pull gauge came in at 2 lbs., 3 ozs.

Just forward of the trigger guard is an articulating lever whereby the rifle’s AICS-style magazines can be released. One steel Accurate-Mag DSSF 10-rounder shipped with the gun, however, spring tension was so great that we were only ever capable of loading eight cartridges into the box at a time—despite this hiccup, reliability was 100 percent. A two-position manual safety, with rearward being safe and forward being fire, is situated at the right rear of the LRR’s receiver.

Despite its relatively modest price tag, the LRR comes not only with a rather nice padded soft case for transport, but also an M-Lok-compatible, 6″ to 9″ Caldwell XLA bipod and a sling. This makes the gun a turnkey option for those looking to jump immediately into the long-range shooting game, as only the installation of an optic is needed in order to be range-ready. And, while our sample did not include a bore-sighted companion scope, T/C is offering combos that pair the rifle with a Vortex Diamondback 4-12X 40 mm straight from the factory. 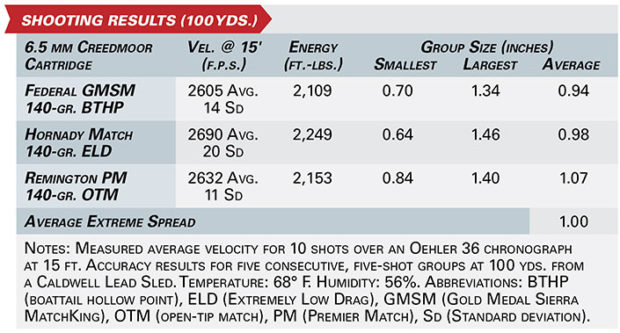 The Thompson/Center LRR comes with a one-m.o.a. guarantee, and it turns out that that’s exactly what we got out of it. Two of the three loads used during formal accuracy testing produced a sub-m.o.a. five-shot, five-group average, with the other just barely exceeding the one-m.o.a. threshold, for a three-load average extreme spread of precisely 1.00″ at 100 yds. Hornady’s ELD Match ammunition provided the smallest group (0.64″) of the afternoon, while Federal’s Gold Medal Sierra MatchKings managed the best overall average (0.94″). Between its substantial weight and its capable muzzle device, the rifle’s recoil was entirely pleasant, yet its blast was intense.

At an MSRP of $1,211, while the Thompson/Center Performance Center LRR doesn’t come cheaply, it does beat out most of the chassis-stocked competition by several hundred dollars. Paired with quality match-grade ammunition, our test gun possessed more than sufficient accuracy to allow shooters with the necessary skills to connect on targets out to 1,000 yds. and beyond with consistency.