Senate Minority Leader Mitch McConnell declared a victory over the possibility of abolishing the filibuster Tuesday morning, mentioning the fact two Democrats confirmed that they would not vote to change the Senate rules.

“It should not be news that a few members of the majority pledge they won’t tear up a central rule. But the Democratic Leader was reluctant to repeat the step I took as majority leader in unified government when I ruled out that step on principle. Rather than relying on the Democratic leader, I took the discussion directly to his members,” McConnell said on the Senate floor.

“Basic arithmetic now ensures that there are not enough votes to break the rule. This victory will let us move forward with a 50-50 power-sharing agreement containing all the elements of the 2001 model because it will sit on the same foundation,” McConnell added.

Democrats now control the House, Senate and White House, and there has been discussion about possibly voting to eliminate the filibuster. Abolishing the filibuster would allow any legislation to pass with a simple majority.

Democratic Arizona Sen. Kyrsten Sinema will not support eliminating the filibuster and her mind “cannot be changed,” her spokesperson said Monday. Also, Democratic West Virginia Sen. Joe Manchin said he will not vote to do so, making it unlikely Democrats would try to abolish the filibuster with the lack of support necessary to make the change. 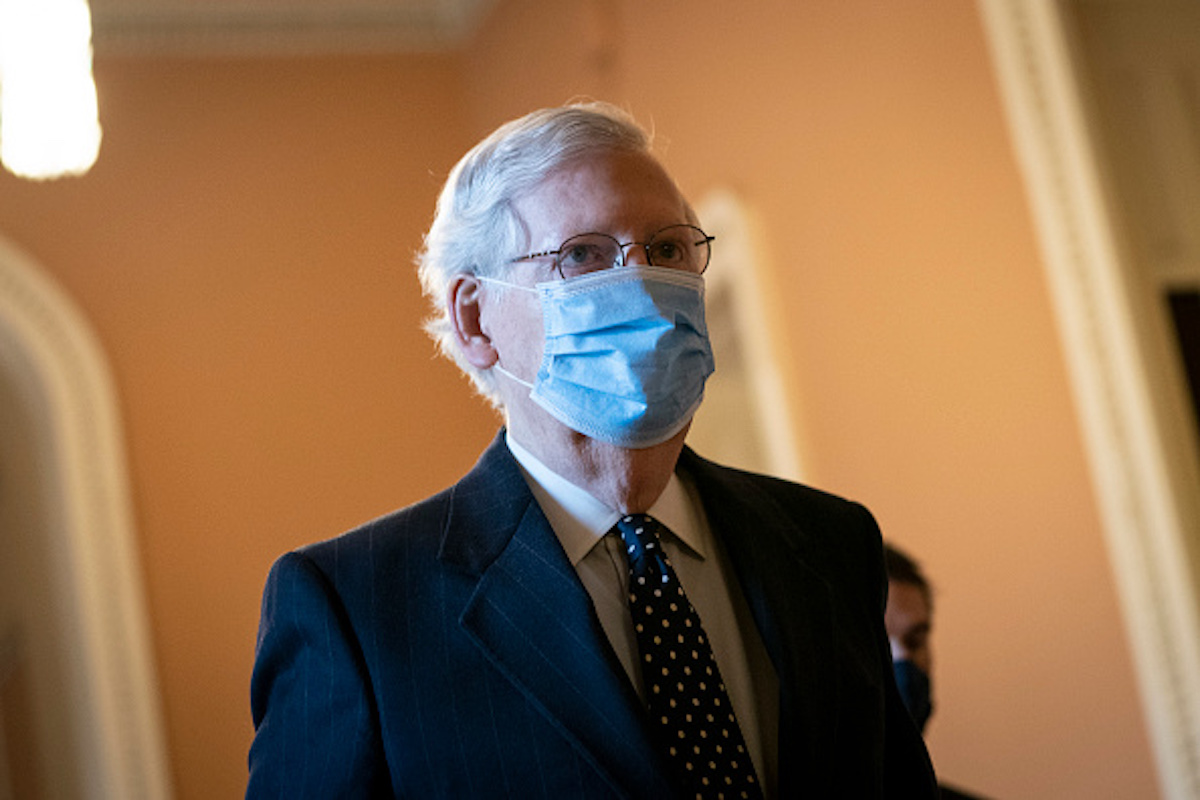 Senate Majority Leader Mitch McConnell (R-KY) arrives at the U.S. Capitol and walks to his office on January 06, 2021 in Washington, DC. (Photo by Drew Angerer/Getty Images)

McConnell then mentioned how during part of former President Donald Trump’s time in office, Republicans had control of all three branches and did not vote to abolish a filibuster. (RELATED: McConnell Says There Are Now ‘Assurances’ Democrats Will Not Abolish The Filibuster)

“Four years ago, Republicans had just won unified control. President Trump and others pressured us heavily to scrap this rule when it was protecting Democrats. But we stood firm. I stood firm. I said we would not do that to our colleagues. No short-term policy win justifies destroying the Senate as we know it. Especially since laws would become so brittle and reversible,” he added.

The Republican leader then said he believes Democrats realized how bad it could have been if they changed Senate rules. (RELATED: Schumer Says Impeachment Trial Will Move Quickly, Won’t Need A Lot Of Witnesses)

“So Democratic Senators used the 60-vote threshold to shape and block legislation. They stalled COVID relief. They blocked police reform. They stopped even modest measures to protect innocent life. The same tool that some Democrats now want to destroy, they used freely and liberally throughout their years in the minority. Republicans understood you don’t destroy the Senate for a fleeting advantage. Our friends across the aisle must see the same,” McConnell said.

Senate Majority Leader Chuck Schumer has previously said that Democrats would “do what it takes” to advance their policy initiatives, even if that meant abolishing the filibuster.