President Joe Biden’s proposal to raise the federal minimum wage from $7.25 to $15 an hour is popular among progressives and labor groups. What may be more surprising is that a minimum wage hike is also backed by America’s largest corporations.

Amazon announced in October 2018 that all of its employees would make a minimum of $15 per hour. The company had faced pushback earlier that year after federal disclosures revealed low worker median pay, according to CNN. Amazon’s public policy team also announced it would begin lobbying for an increase in the federal minimum wage.

Amazon: “We believe $15 an hour is the minimum anyone in the U.S. should be paid for an hour of labor. We also believe it’s good for business.”

Target announced in July 2020 that a $15 per hour minimum starting wage would be implemented for all employees. The company also announced a “recognition bonus” of $200 to retail and distribution workers for their efforts during the coronavirus pandemic.

Walmart announced in September 2020 that an updated pay scale would be implemented for at least 165,000 employees. The minimum wage would start between $18 to $21 an hour for affected employees and go up to $30 an hour in some instances.

Corporate America’s support for a $15 federal minimum wage is notable given that a 2019 report from the Congressional Budget Office estimated a minimum wage hike could cost up to 3.7 million jobs by 2025. (RELATED: Janet Yellen Used To Say Minimum Wage Hikes Killed Jobs — What Changed?)

Big business may be supporting a higher minimum wage because — unlike their smaller competitors — they can actually afford it. A broad consensus among economists suggests raising the minimum wage would lead to higher labor costs for businesses, but those costs are far more likely to hurt small businesses that employ fewer workers and bring in less revenue. 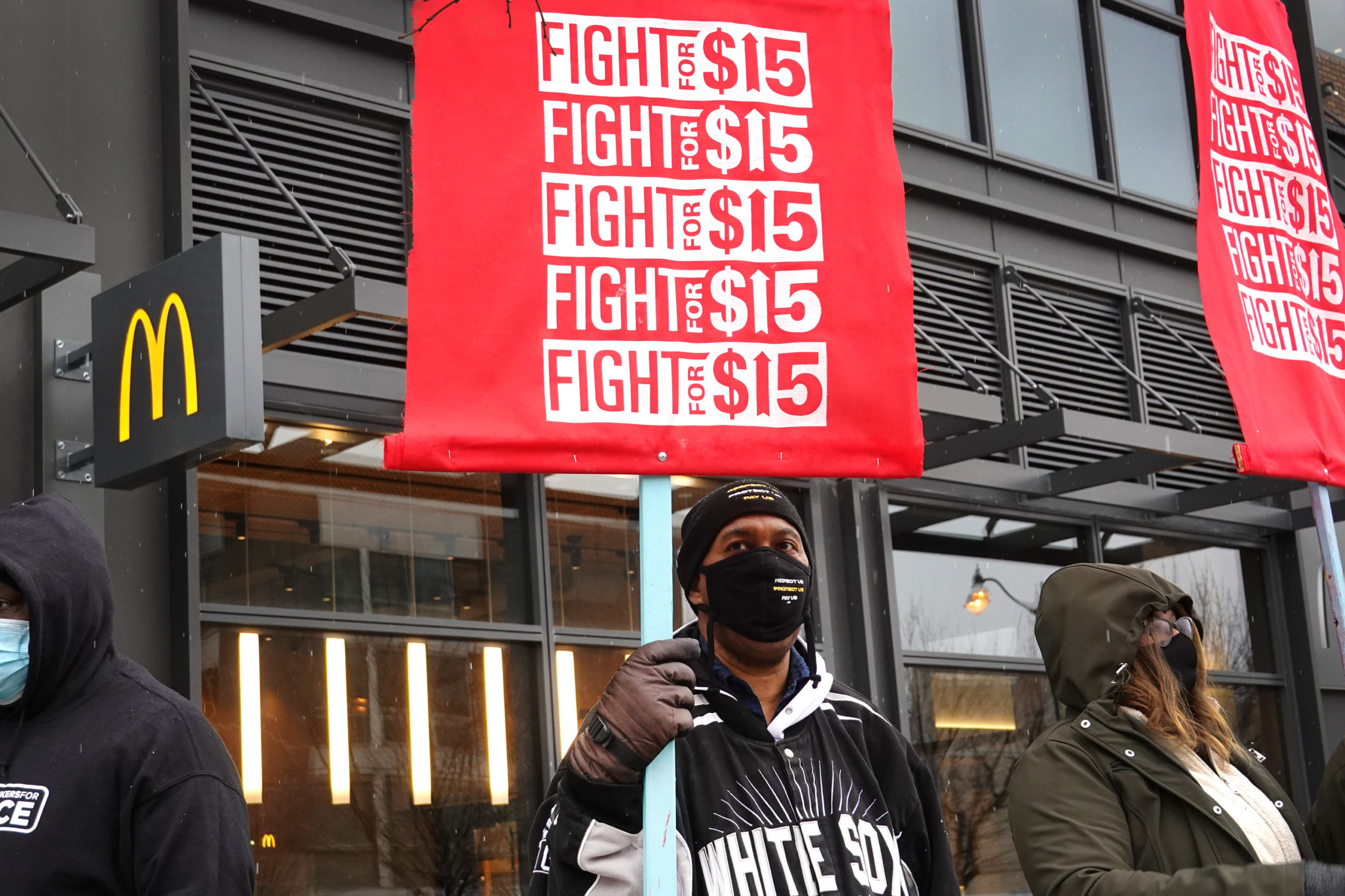 Demonstrators participate in a protest outside of McDonald’s corporate headquarters on Jan. 15, 2021 (Scott Olson/Getty Images)

The National Bureau of Economic Research concluded in a 2017 study that when Seattle raised its minimum wage to $13 in 2016, small businesses in particular faced higher labor costs, forcing them to lay off employees or reduce pay. Total payroll earnings for low-wage employees fell by an average of $125 per month according to the study.

An independent survey of small business owners in 2018 found that raising the minimum wage by just $1 an hour could cost small businesses tens of thousands of dollars in additional payroll costs each year. While corporate giants like Amazon and Walmart would be able to make up the difference, the same can not be said for small businesses.

Small businesses would likely become much less competitive over the long term, and higher labor costs would force them to cut back on operations or raise consumer prices. This could in turn squeeze small businesses out of the market entirely, giving larger companies that can afford the minimum wage hike even more economic power.

Amazon in particular has dominated e-commerce in recent years and generated more than $96 billion in net sales during the third quarter of 2020, according to a company statement. Amazon’s market share is now projected to account for 50% of the entire e-commerce retail market this year, according to Statista. 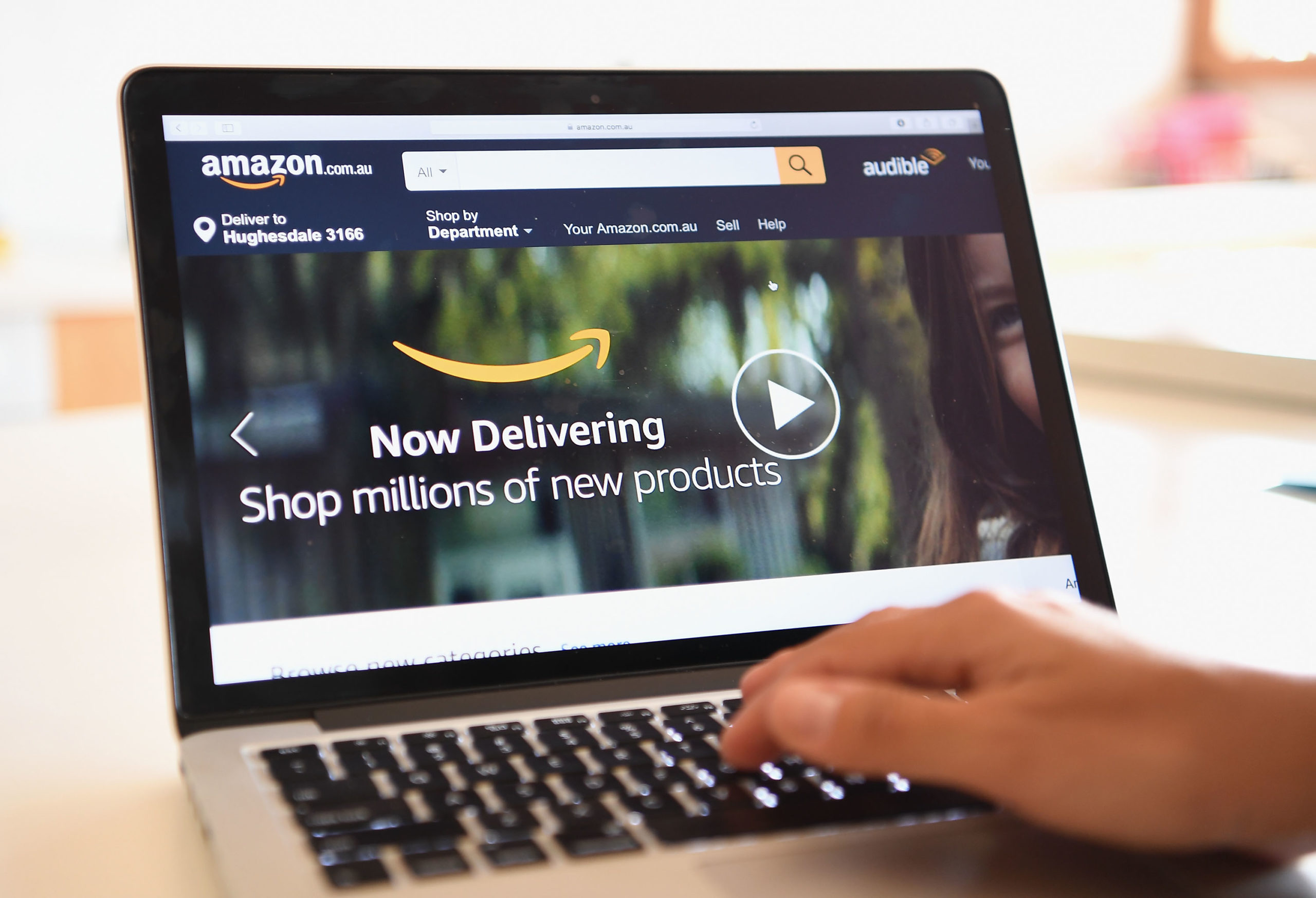 The economic fallout of the coronavirus pandemic has not considerably affected Amazon — the company instead is generating record-breaking profits. But the pandemic has been far less forgiving for small businesses amid a wave of business closures and layoffs. (RELATED: How Has Coronavirus Impacted America’s Small Businesses? Here’s What The Data Says)

While official numbers may not be known for some time, a Yelp economic impact report published in September found that nearly 100,000 small businesses had permanently closed since the start of the pandemic.

Small businesses also accounted for 60% of all businesses closures during the pandemic and largely affected the restaurant and retail industries, according to CNBC.

Karen Harned, the executive director of the Small Business Legal Center for the National Federation of Independent Business, said raising the minimum wage during the pandemic would worsen the economic devastation small businesses are already experiencing. 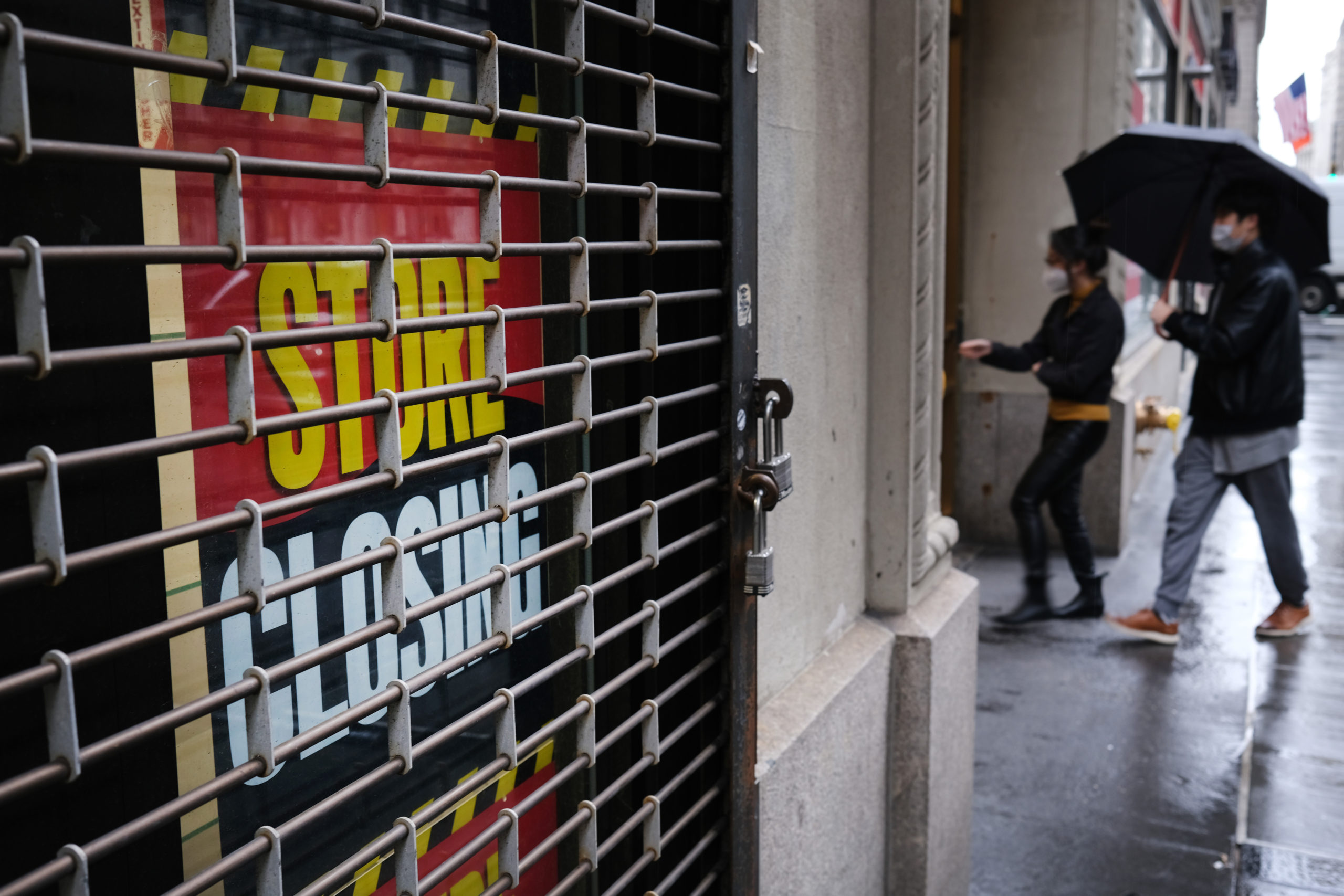 A store stands closed on May 08, 2020 in New York City (Spencer Platt/Getty Images)

“Especially for the small business owners I represent, any minimum wage hike is problematic even in the best of times,” she told WBUR during a Dec. 15 interview. “But right now we are far from the best of times.”

National Restaurant Association executive vice president Sean Kennedy concurred in a statement Tuesday. The restaurant industry is pushing back on federal efforts to raise the minimum wage, including a new bill introduced Tuesday by Senate Budget Committee Chairman Bernie Sanders, according to The Hill. (RELATED: How A $15 Minimum Wage Could Move Jobs From Red States To Blue States)

“A nationwide increase in the minimum wage will create insurmountable costs for many operators in states where restaurant jobs are most needed for recovery,” he said.

Restaurants across the country have struggled to stay open during the pandemic due to a decline in business and government restrictions on indoor dining. The industry has laid off 2.5 million workers and roughly 17% of restaurants have shuttered, according to the National Restaurant Association.