Gaetz started speaking shortly after 1 p.m. Thursday afternoon to an audience at the steps of Wyoming’s Capitol building in Cheyenne. He was invited by Wyoming State Representative, Ocean Andrews, to speak about Liz Cheney’s recent support for the impeachment of former President Donald Trump.

Gaetz did not hold back from the beginning of his speech saying, “I think if Liz Cheney had a rally with all of her supporters, they could likely meet inside one of the elevators in the capitol and still have plenty of room for social distancing.” The Congressman then went on to say that the had only been in the state for one hour and felt that he “already knows the place a lot better” than Cheney.

“It’s the establishment against the rest of us.” Gaetz said as he spoke on Washington establishments and their role in American politics.

“But, there are more of us than there are of them and we see the fakes and the phonies more clearly than ever before.”

Gaetz responded to a comment made to him by a spokesperson for Cheney, “In Wyoming, men don’t wear make-up,” by saying “It’s pretty easy for me to get a little make-up off my shirt, far more difficult for Liz Cheney to get the blood off her hands after sending America’s best to foreign lands to die for unknowable gain and personal profit.” There is no indication that Cheney had any personal financial gain from any wars.

He then said, “How can even you call yourself a representative when you don’t represent the will of the people?”

“That’s what all the neo-cons ask about the Arab dictators, I figure maybe we ought to ask the same question of a beltway bureaucrat, turned fake cowgirl, who supported an impeachment that is deeply unpopular in the state of Wyoming.”

Gaetz said that he spoke with former President Donald Trump yesterday and wanted him to share poll results that came out yesterday about disapproval amongst Wyoming citizens for the impeachment trial against him.

About nineteen minutes into the speech, Gaetz put Donald Trump Jr. on speakerphone for the audience to hear. 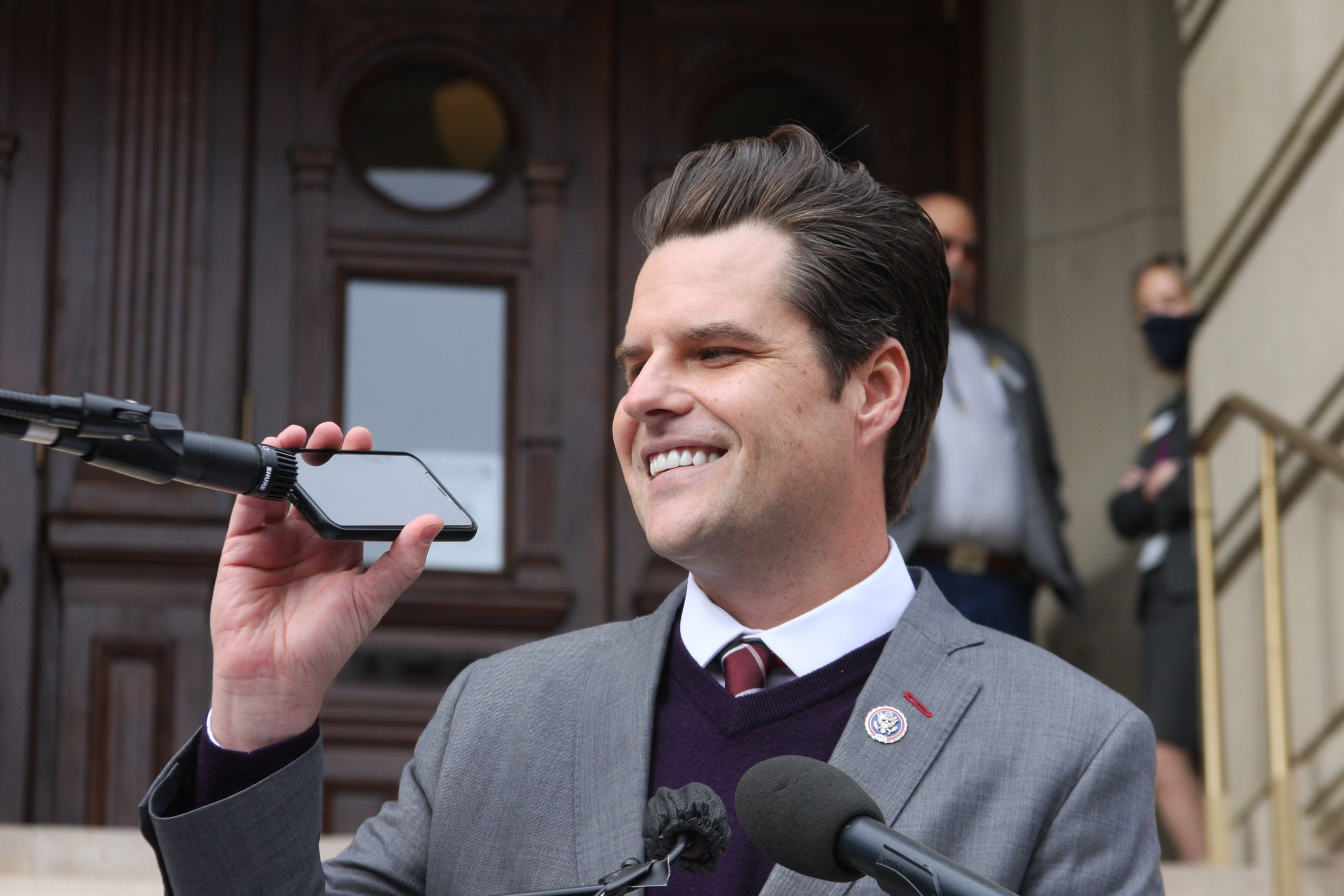 Trump Jr. referenced the poll his father shared with Gaetz saying, “Based on the numbers that Matt just talked about, it seems Liz Cheney’s favorables there are only slightly worse than her father’s shooting skills.” Continuing that he wants to see elected officials start representing their constituency and not their own personal interest or gain.

“They’re supposed to lead, and I have been pretty involved for the last few years and I haven’t seen Liz Cheney do any of those things,” Trump Jr. said. “Let’s find someone who is for America and against wars.” (RELATED: Wyoming State Senator Announces Primary Challenge Against Liz Cheney)

“Wyoming is a great state, you are great people, you are real America. We are in a battle for the soul of the Republican party and I intend to win it,” Gaetz said. “You can send a representative who actually represents you and you can send Liz Cheney home. Back home, to Washington D.C.”