Republican lawmakers have unleashed a wave of pro-life bills into the Democrat-controlled Congress this week. 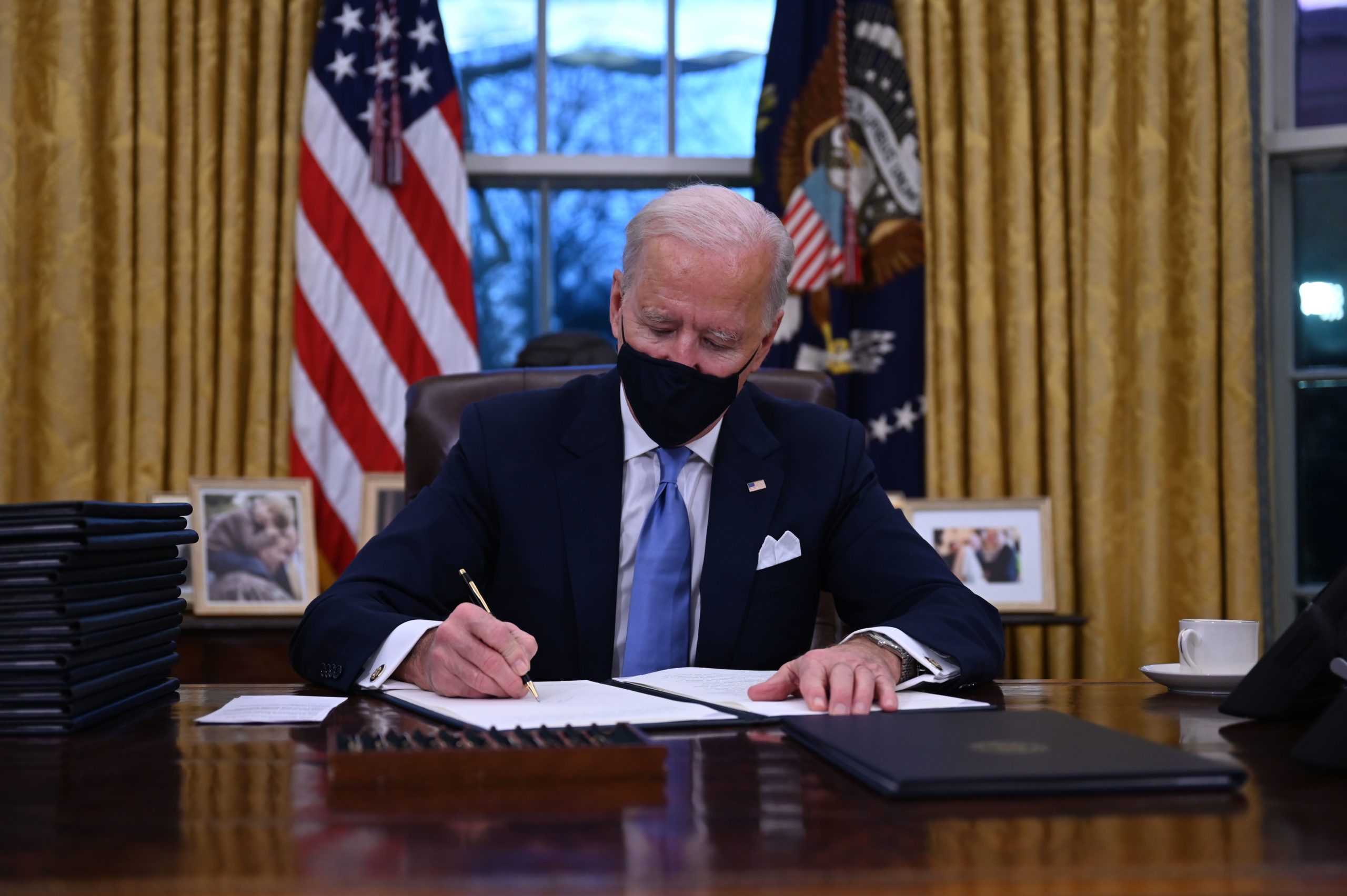 US President Joe Biden sits in the Oval Office as he signs a series of orders at the White House in Washington, DC, after being sworn in at the US Capitol on January 20, 2021.  (JIM WATSON/AFP via Getty Images)

The proposed Republican bills, which are unlikely to pass the Democrat-controlled Congress, were introduced same week that the 48th Annual March for Life was scheduled to take place. The march will take place virtually due to security and health concerns.

Democrats currently hold control of the House with a 222-211 edge — the narrowest margin since the 1940s.

Republican Texas Rep. Ron Wright reintroduced the Teleabortion Prevention Act Friday morning, according to a press release from Wright’s office. The legislation seeks to make it a federal offense for healthcare providers to perform chemical abortions without examining the mother first. The provider would also be required to be present during the chemical abortion and schedule the patient’s follow-up visit under the bill, according to Wright’s office.

Wright also reintroduced the Child Custody Protection Act, which would criminalize the transportation of young women who are minors across state lines in order to “circumvent a state law requiring parental involvement in that minor’s abortion,” the congressman’s office said in a press release.

“With the Biden Administration and Congressional Democrats already gunning to roll back abortion restrictions, it’s more important than ever that we continue to be a strong voice for the voiceless,” Wright said in a statement. “Both these bills help prevent the destruction of unborn life, safeguard women’s health, and protect the conscience rights of millions of Americans. The sanctity of life has been my top priority and an issue I will continue to devote my life protecting.”

Republican Colorado Rep. Doug Lamborn introduced the Second Chance at Life Act Thursday, which would require abortion clinics to provide information on the reverse side effects of chemical abortions to women who wish to obtain that type of abortion. The legislation would also require abortion providers to let the woman know that the chemical abortion, a two-drug procedure, can be reversed even after the first drug is administered.

“The Second Chance at Life Act provides hope for babies whose mothers deserve the opportunity to make a fully informed decision on any abortion,” Lamborn said in a statement. “Chemical abortions can be reversed with zero harm to the child if the pregnant mother develops second thoughts midway through the abortion process.”

SAVE Moms and Babies Act

Republican Ohio Rep. Bob Latta introduced both the Support and Value Expectant (SAVE) Moms and Babies Act and the Protecting the Dignity of Unborn Children Act on Thursday, according to a press release from the congressman’s office. (RELATED: EXCLUSIVE: Republican Lawmakers Warn FDA Against Calls To Remove Restrictions On Abortion Drugs)

The SAVE Moms and Babies Act would fight the removal of the FDA approved Risk Evaluation and Mitigation Strategies (REMS) currently in place on abortion drugs and prevent providers from “dispensing” the drugs remotely. The Protecting the Dignity of Unborn Children Act would criminalize disposing aborted body parts in landfills or in any navigable U.S. waters.

Republican Nebraska Sen. Ben Sasse reintroduced the Born–Alive Abortion Survivors Protection Act Thursday, legislation he originally introduced in 2015. He also reintroduced the legislation in 2019 after Democratic Virginia Gov. Ralph Northam suggested that a mother and doctor can decide, after a baby is born, to let the baby die.

The legislation requires that doctors exercise the same degree of professional care to protect a newborn baby delivered alive through a failed abortion. It also requires that the baby be transported to a hospital after it has been given proper care. (RELATED: ‘We’re Talking About Babies’: Ben Sasse Says Born-Alive Bill Is Not About Abortion Access)

“Every baby deserves a fighting chance, whether she’s born in a state-of-the-art hospital or an abortion clinic in a strip mall,” Sasse said in a statement. “A decent society can’t turn its back on these babies because compassion, truth, and love still matter.”

“A week ago, President Biden stood on the Capitol steps and said ‘with unity we can do great things. Important things. We can right wrongs.’ Well, here’s a chance to do just that,” Sasse said.

Republican Indiana Reps. Jackie Walorski and Jim Banks reintroduced the Dignity for Aborted Children Act Thursday. The legislation would ensure that the remains of aborted babies be treated dignity and would hold abortion providers accountable if  they did not properly bury or cremate fetal remains.  (RELATED: Abortion Doctor Who Hoarded Fetuses Faulted WWII Bombings For His ‘Perception’ Of Humanity, Filmmaker Says)

The lawmakers first introduced the legislation in 2019 after family members discovered a collection of 2,246 medically preserved fetal remains in the Illinois home of the late Dr. Ulrich George Klopfer.

Klopfer ran three different Indiana abortion clinics during his lifetime and performed over 30,000 abortions since he began operating in 1974.

“While the Supreme Court upheld Indiana’s law mandating the respectful treatment of abortion victims, that won’t stop abortionists like Dr. Klopfer from committing these unspeakably horrific acts in other states,” Banks said in a statement.

Republican South Carolina Sen. Lindsey Graham reintroduced the Pain Capable Unborn Child Act Wednesday, legislation that would ban abortions after 20 weeks except in cases of rape, incest, or if the mother’s health is at risk. Graham has introduced this legislation the last four congresses.

“I am proud to once again introduce the Pain–Capable Unborn Child Protection Act,” the senator said in a statement. “There are only seven countries that allow wholesale abortions at the 20-week period, including China and North Korea. The United States should not be in that club.”

“I don’t believe abortion, five months into pregnancy, makes us a better nation,” Graham said. “America is at her best when she’s standing up for the least among us, and the sooner we pass this legislation into law, the better. We are on the right side of history.”

Rep. Banks also introduced a bill Thursday that would block the Biden administration from Trump’s “Protect Life Rule” and led 200 of his Republican colleagues in pledging support for the Hyde Amendment. The lawmakers sent a letter Tuesday to congressional leaders pledging to oppose any legislation eliminating or weakening the amendment, which bans the use of federal funds for abortions.

“Conservative Republicans are sending a strong statement to congressional leaders: We will not stand idle as radical Democrats work to end the ban on taxpayer-funded abortions,” Banks told the DCNF earlier this week. “I pray this show of solidarity will save the Hyde Amendment and save thousands of innocent lives.”