Large corporations have endorsed and lobbied for a $15 federal minimum wage in recent years, but while they can afford such a policy, small businesses would be harmed, studies have shown.

Many corporations, once known for their opposition to raising the federal minimum wage, have reversed course in recent years, raising their own wages to $15 per hour and lobbying the federal government to legislate an increase. While larger corporations have determined they could benefit from such a reversal, studies continue to show a federal minimum wage hike will crush small business.

“More than doubling the federal minimum wage is one of the policies that would threaten the fragile small business economic recovery,” he said. (RELATED: WILFORD: The Left’s Unhinged Reaction To $15 Minimum Wage Legislation) 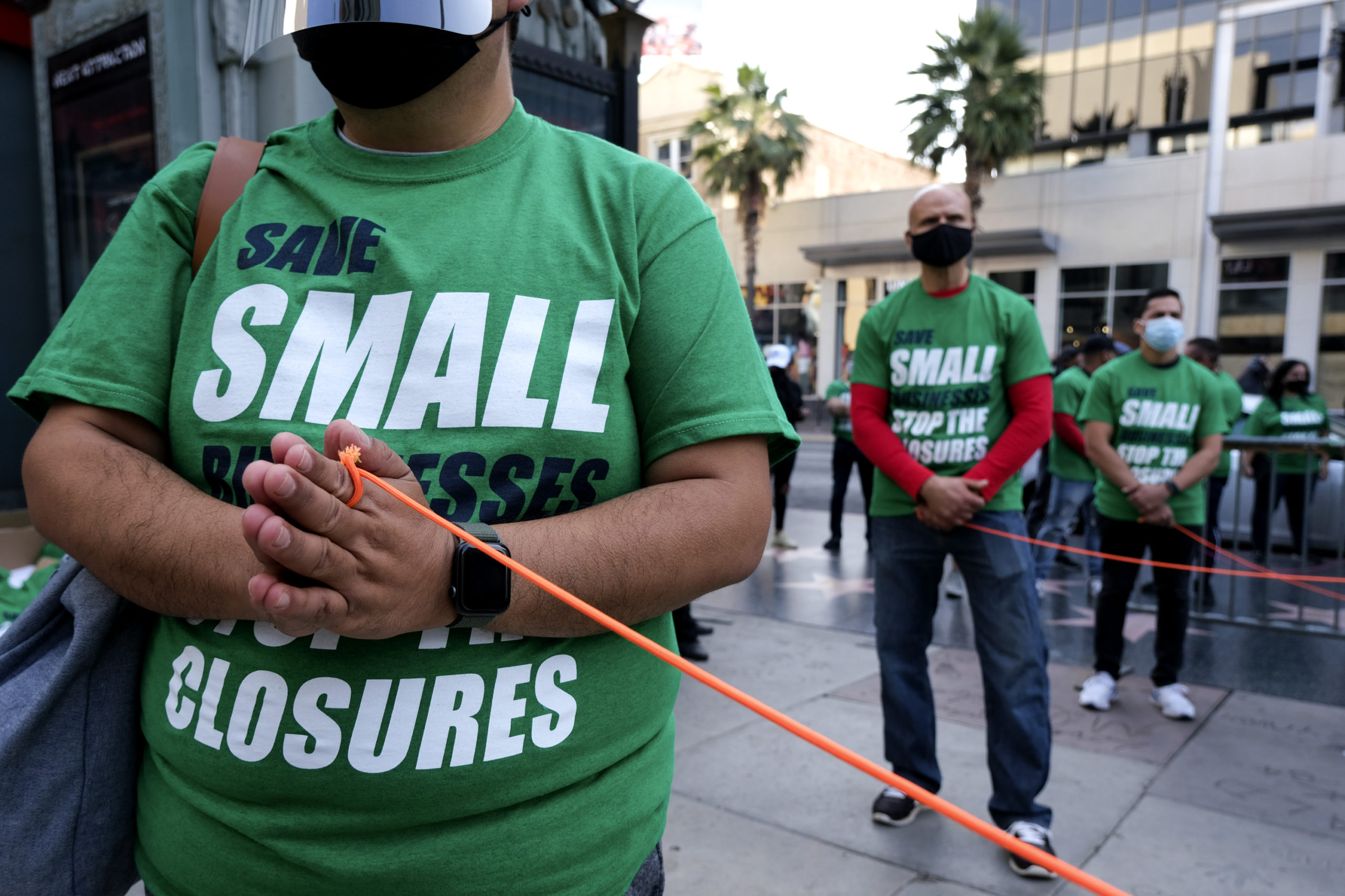 “Small businesses do not have the resources to absorb such a dramatic increase in costs,” U.S. Chamber of Commerce Vice President of Employment Policy Marc Freedman wrote in 2019.

The $15 minimum wage would result in 1.3 million workers losing their jobs, a 2019 Congressional Budget Office report estimated. (RELATED: How A $15 Minimum Wage Could Move Jobs From Red States To Blue States)

In July 2019, the House passed legislation that would increase the federal minimum wage to $15 by 2025, but the bill never received a vote in the Senate. On behalf of the NFIB, Kuhlman criticized a 2021 revival of the legislation in a recent letter of opposition.

“At a time when small businesses are confronted with the worst pandemic in more than 100 years, Congress should not be considering saddling them with a costly new mandate,” he wrote in the letter shared with the DCNF. 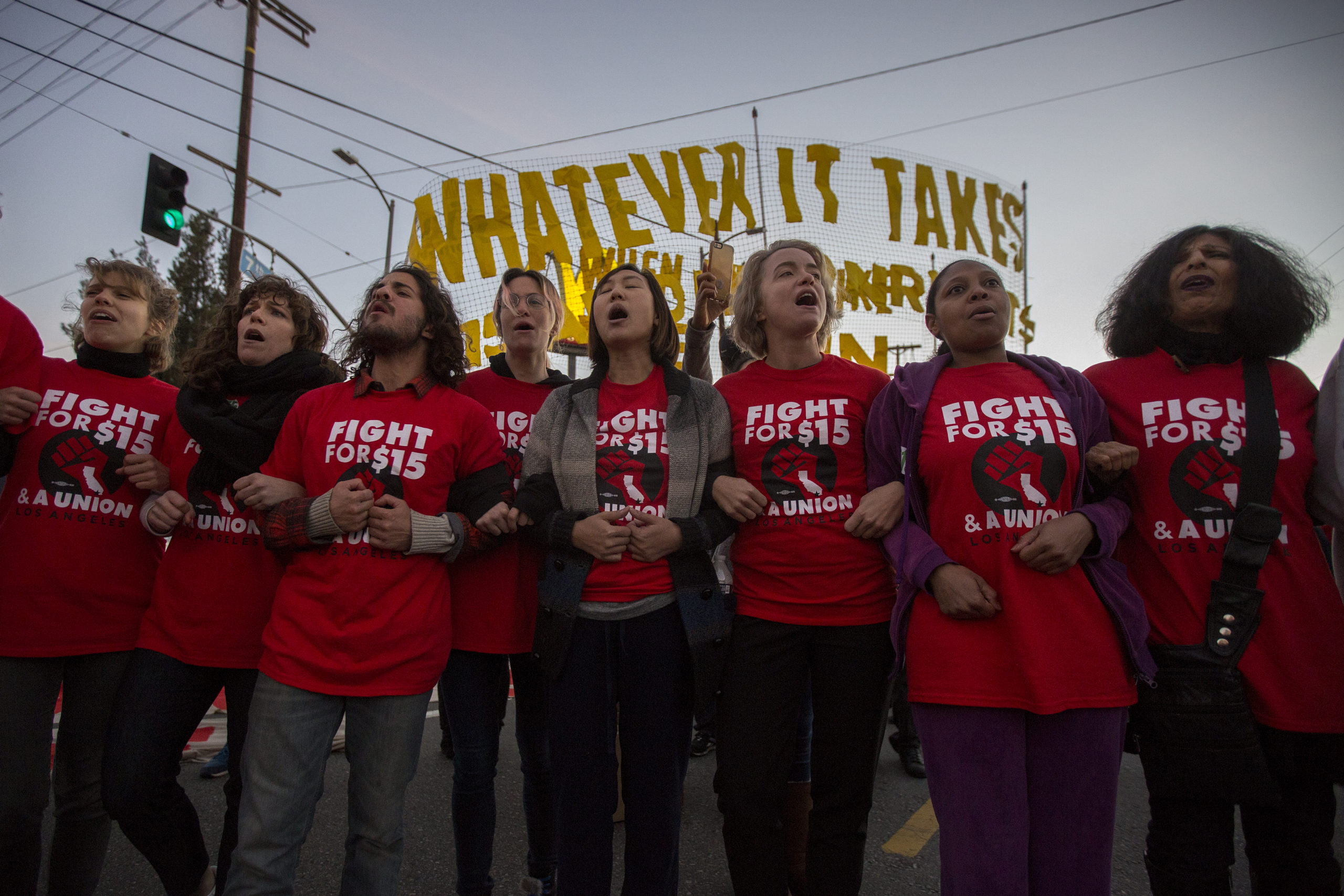 McDonald’s employees demand a $15 per hour wage and union rights during a 2016 protest in Los Angeles, California. (David McNew/Getty Images)

Advocates of a $15 minimum wage law have argued that the current $7.25 per hour minimum wage contributes to increasing income inequality. Businesses can afford to pay their employees higher wages and stand to benefit from a stimulated economy, according to a recent report from the progressive think tanks Economic Policy Institute (EPI) and National Employment Law Project (NELP).

Corporations such as McDonald’s and Amazon, which routinely report billions of dollars in profit, have endorsed this view. In the process, they have joined the ranks of EPI, NELP and labor unions like the American Federation of Labor and Congress of Industrial Organizations (AFL-CIO), which has butted heads with corporations on minimum wage policy.

“We do have a perspective on elements of this discussion,” McDonald’s Vice President of U.S. Government Relations Genna Gent wrote in 2019, The New York Times reported. “We believe increases should be phased in and that all industries should be treated the same way.”

Gent added that the company would stop using its resources “including lobbyists or staff” to oppose minimum wage increases, according to the Times. (RELATED: Biden Chief Of Staff Dodges Question On Whether Administration Would Consider Tabling Minimum Wage Increase)

Amazon went further in 2018, pledging to actively lobby Congress to increase the minimum wage while increasing its own companywide minimum wage to $15 per hour. Senior Vice President of Amazon Global Corporate Affairs Jay Carney, who was White House press secretary under former President Barack Obama, reiterated the company’s view on an increased minimum wage in a blog post Tuesday.

“During the last congressional session, Amazon advocated for the previous version of the Raise the Wage Act, which passed in the House but stalled in the Senate,” Carney wrote. “We will continue our advocacy this Congress.” 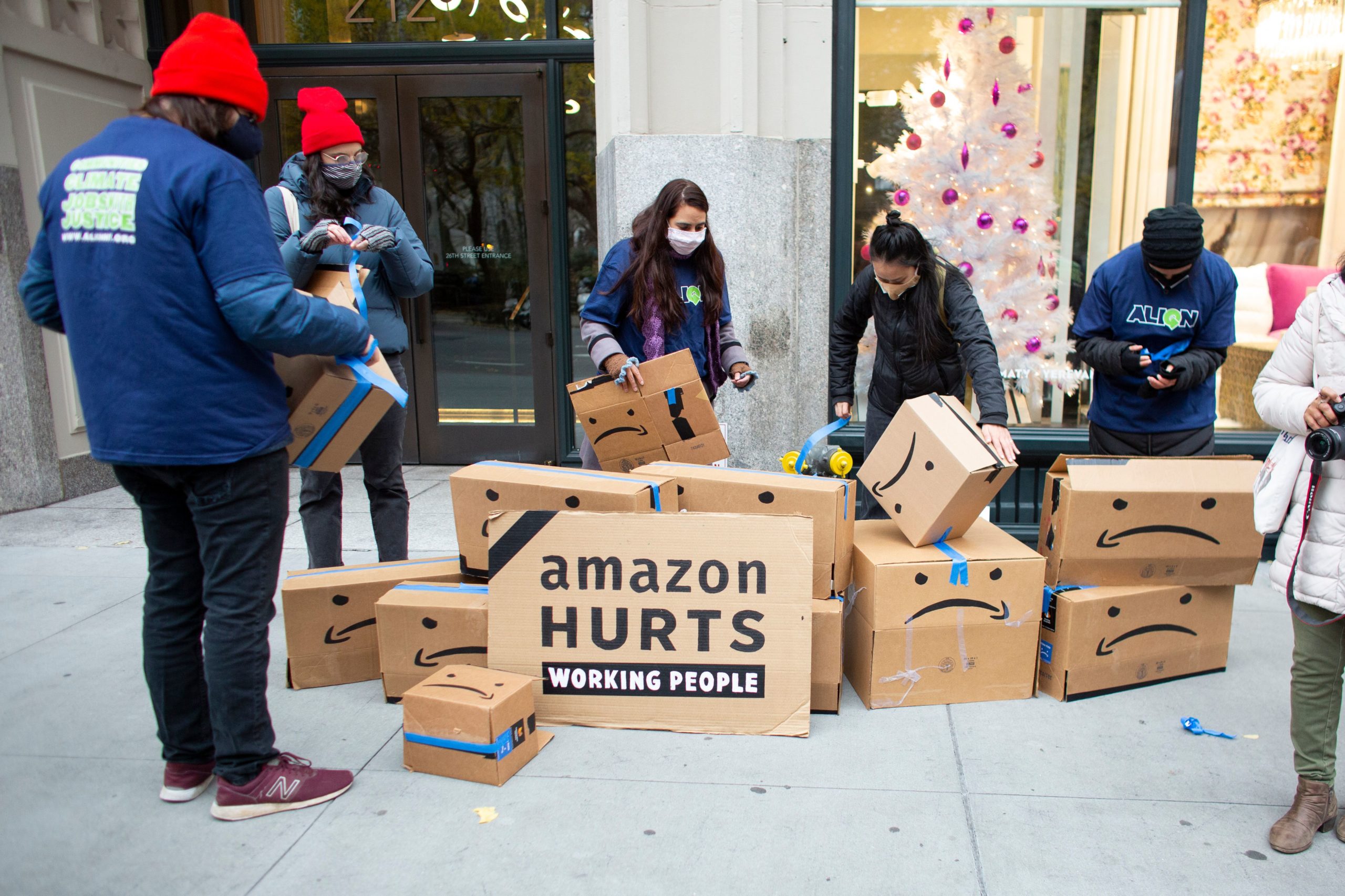 Amazon workers demonstrate during a protest organized by New York Communities for Change in front of the Jeff Bezos’ Manhattan residence in New York on Dec. 2. (Kena Betancur/AFP via Getty Images)

Facebook, Target, Costco, Wells Fargo, Bank of America, JP Morgan and Google have all announced support for a higher minimum wage since 2019, increasing their own wages in the process.

“A number of our members that have substantial retail operations are very concerned about image,” Roger King, senior labor and employment counsel with the HR Policy Association, a trade group of large employers, told CNN in 2019.

“They’re very concerned about marketability of their product, and they don’t want to be a poster child for poor working conditions,” King continued. (RELATED: Here’s How President Biden’s Executive Orders Could Hurt Workers)

Kuhlman agreed with King. Corporations have learned to factor public perception into their support for the minimum wage increase, he told the DCNF.

“Corporations get a PR benefit, Kuhlman said. “There is also a political benefit given the makeup of Congress and the administration.”

Corporations weigh the costs of a higher minimum wage, which can be absorbed by large profit margins, with the benefits of better public perception, he added. Corporations may also free up money by laying off workers, investing in technology or cutting other employee benefits, all while keeping their minimum wage high.

Madeline Dovi contributed to this report.