A class-action lawsuit filed against the investing app Robinhood on Thursday just hours after it prohibited its users from purchasing GameStop stock is unlikely to be successful in court, legal experts told the Daily Caller News Foundation.

And federal regulators with the Securities and Exchange Commission are going to have a hard time proving that the millions of retail investors from the Reddit forum WallStreetBets who forced a monumental short squeeze on GameStop, causing the company’s price to skyrocket nearly 1,500% in January, violated any securities laws, the experts said.

“They may be ganging up, but it doesn’t seem like there are a lot of material misrepresentations being made. And the SEC’s standard modus operandi is to go after people who are making material misrepresentations,” University of Michigan Law professor Adam Pritchard told the DCNF. “These people may just be stupid. But there are a bunch of them and they’re encouraging each other. It’s not a crime to be stupid.”

GameStop’s price explosion in January was made possible because hedge funds and other institutional investors had shorted 140% of the company’s existing shares. When an investor shorts a stock, they’re betting that the security will decrease in value. Short sellers stand to double their investment at best if the stock loses all value.

Relying on publicly-available information, Redditors exploited the conditions that short-sellers created with GameStop by buying its stock en masse in January and committing to hold, forcing hedge funds that had heavily shorted positions in the company to purchase GameStop stock amid the mania, driving its price up even more.

Many of the retail investors who participated in the GameStop short squeeze used the popular trading app Robinhood to facilitate their trades. However, on Thursday morning amid the squeeze, Robinhood blocked its users from purchasing shares of GameStop due to “volatility.”

The move immediately caused GameStop shares to plummet from $468 just after the market opened on Thursday to $126 less than two hours later. A class-action lawsuit was filed against Robinhood that afternoon, accusing the brokerage of purposefully manipulating the market “for the benefit of people and financial institutions who were not Robinhood’s customers.”

GameStop’s stock price recovered to $325 when the market closed on Friday.

Pritchard said he doesn’t expect the lawsuit to be successful, saying Robinhood has the right to restrict trading on any security they want. Robinhood’s terms of service states it may “prohibit or restrict the trading of securities” at any time and at its sole discretion.

“It is just nonsense. If they don’t like the terms of service at Robinhood they should open up a brokerage account somewhere else and let them see if they can trade,” Pritchard said.

“The SEC imposes obligations on them to police against fraud, insider trading and manipulation by their customers and if they see that there’s a problem they have not only the right but the obligation to bring it to the attention of FINRA,” Pritchard said. “You don’t like it, go elsewhere.”

“I don’t think that a breach of fiduciary duty claim here will be successful. Broker-dealers historically have been held to a standard of suitability, not a fiduciary standard,” Laby said. “Under the SEC’s new Regulation Best Interest, they are now held to a higher ‘best interest’ obligation, but not a fiduciary obligation.”

And assuming that a court enforces Robinhood’s terms of service, the other contract and negligence-related claims in the class-action lawsuit will be difficult to prove, Laby added.

Child actor-turned bitcoin billionaire Brock Pierce said that Robinhood has much more to worry about than the class action lawsuit.

“Their customers hate them now,” Pierce told the DCNF. “Yes, there’s a bunch of stuff in their terms of service that their customers are not aware of. But when you have this many angry customers and lawsuits coming in, the combination of those things is a perfect storm and I don’t know how you survive it.

GameStop’s rise has nothing to do with market fundamentals, but manipulation will be hard to prove

The retail investors on Reddit who caused GameStop’s stock to skyrocket in January made their investment decisions based on publicly available and correct information, Pierce explained. But the stock’s monumental rise has nothing to do with market fundamentals, he said.

“The reality is a bunch of people saw a trade and all acted on that trade independently,” Pierce said. “When you look at it closely, it’s actually a smart trade. When over 100% of a stock of a company is shorted and the investment strategy is to facilitate a short squeeze … this is one of those situations where fundamentals are no longer relevant.”

“We keep calling them amateur investors. They were brilliant,” Pierce said. “They were right. Their thesis was sound, but not driven by fundamentals.”

The ringleaders who coordinated the GameStop short squeeze on Reddit could run into legal issues if the SEC can prove they made material misrepresentations as they called on investors to buy and hold the company’s stock.

“Manipulation is one of the most challenging violations of securities laws to make because the government has to show that you had a fraudulent intent,” Pritchard said.

“For the SEC to have something plausible it would have to go after someone who said they were buying and committing to not selling, but in fact were intending to sell,” he explained.

Laby added: “One way to prove manipulation is to demonstrate that a person deliberately spread false or misleading information about an issuer. Merely discussing a stock or giving a prediction on how high the price may go is not the same as spreading false information.”

Lawmakers on both sides of the aisle came together in a rare showing of unity on Thursday and Friday to express outrage at Robinhood for restricting trading access to GameStop for its users.

The leaders of the House Financial Services Committee and the Senate Banking Committee pledged to hold hearings on the issue. Prominent lawmakers such as Democratic Massachusetts Sen. Elizabeth Warren have taken aim at the SEC for allowing the stock market to take on a casino-like atmosphere due to its failure to enforce market manipulation rules.

Pritchard said he doesn’t expect lawmakers to take any meaningful action in response to the GameStop trading frenzy.

“Lawmakers will say a lot of damn fool things and do nothing,” Pritchard said. “That should be your baseline prediction, whatever the issue, and it applies I think with vigor in this context.”

“The politicians will fulminate about short sellers and why they’re evil as they routinely do and that its always idiotic populism, every single time,” he added.

Pritchard said he thinks lawmakers and the SEC are stuck in an ideological dichotomy of their own making.

The reality of the situation, Pritchard argued, is that the hedge funds are the victims in the GameStop saga and the retail investors who forced the squeeze are the villains.

“I’m saying it out loud. The hedge funds are the victims,” Pritchard said.

But the SEC and lawmakers are unlikely to have any political willpower to go after the little guy, even if they can prove that illegal market manipulation occurred, Prichard explained.

“If they start going after the retail traders, what’s Elizabeth Warren going to say?” he said. “It violates one of the tenets of the faith, which is the little guy is the victim.”

“It’s a big mess. The exchanges should have stopped trading in these securities and gotten it sorted out but they didn’t do it,” Pritchard said. “The SEC has the power to suspend trading in a security for 10 days for no reason. They knew about it and didn’t do anything.” 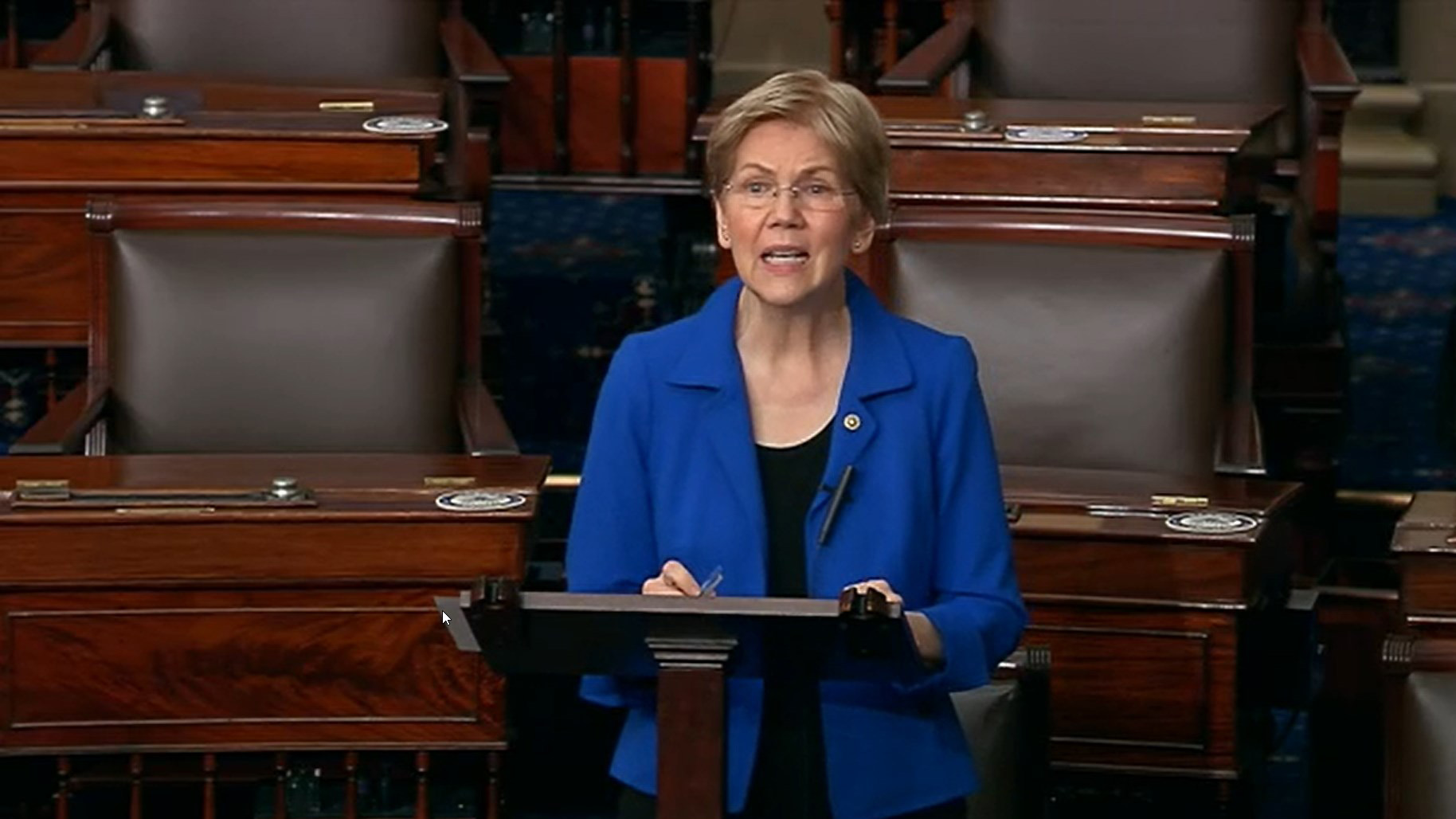 In this screenshot taken from a congress.gov webcast, Sen. Elizabeth Warren (D-MA) speaks during a Senate debate session to ratify the 2020 presidential election at the U.S. Capitol on January 6, 2021, in Washington, DC. (congress.gov via Getty Images)

Laby had a more optimistic outlook on the SEC’s likelihood to respond to the situation, saying he expects the commission to open an investigation, send out subpoenas, interview witnesses and get to the bottom of whether any market manipulation took place.

“There are ample reasons for the SEC and FINRA to at least pursue an investigation. Whether they should file an actual claim will depend on the results of an investigation,” Laby said.

Laby also noted that SEC investigations are “typically non-public, so we will not know whether the SEC is conducting an investigation unless the SEC decides to make it public, or unless those from whom information is sought share that with the public.”

Pierce, the bitcoin billionaire, said that short-sellers should never have been able to short 140% of GameStop’s stock in the first place.

“This is not meant to be possible,” Pierce said. “The laws of physics were broken here and if the people hold the line there’s no way [the short-sellers] can go out and they will all go under.”

Gamestop stock likely to crash when all’s said and done

GameStop had a market capitalization rate of around $250 million in July. The company closed 462 of its stores in 2020 amid the coronavirus pandemic and expects to close 1,000 more by March, according to CNET.

GameStop is now worth over $22 billion as of Friday afternoon when its shares were trading at $325 at market close.

“It will be worth $250 million again, because that’s what the company is worth based on its future revenue prospects,” he said.

To the retail investors buying into GameStop amid the short squeeze, Pritchard said: “These people are making very poor choices but they’re grownups and they will be an object lesson to others when they get hammered.”

Pierce also said GameStop’s stock price will eventually go down to a “rational fundamental level” after the short squeeze is concluded.

Pierce said that many will reap profits from their investment in GameStop, but he recognized that some retail investors are likely going to sustain losses, especially those that incorrectly time the market.

“If you’re the last person to buy at the highest point you’re going to lose money,” Pierce said. “Some people could get caught up in the hype and, not having done their research, buy at the top and lose money.”

“But welcome to the free market,” Pierce added.