Those who call President Joe Biden a “devout Catholic” may do so in attempts to suggest that “Catholicism is indistinguishable” from liberal ideology, a professor of theology told the Daily Caller News Foundation.

“When a U.S. President cloaks himself in the outward signs of Catholic identity in order to expand access to abortion, or to use executive power to enforce a gender ideology that will inevitably threaten the freedom of the Church in this country, what you have before you is a Trojan Horse,” Dr. Chad Pecknold, an associate professor of Theology at the Catholic University of America, told the DCNF.

An examination by the DCNF found that major media outlets and reporters frequently celebrate Biden’s Catholicism as “devout” without noting the significance of his divergence from Catholic teaching. Yet outlets and reporters also criticized the Catholicism of Supreme Court Justice Amy Coney Barrett for her adherence to certain Catholic principles.

“What we are seeing is not something new, but something very old, and very ugly,” Dr. Patrick Deneen, a professor of Political Science at the University of Notre Dame, told the DCNF. (RELATED: Media Treats Catholicism In Vastly Different Ways Depending On Politics) 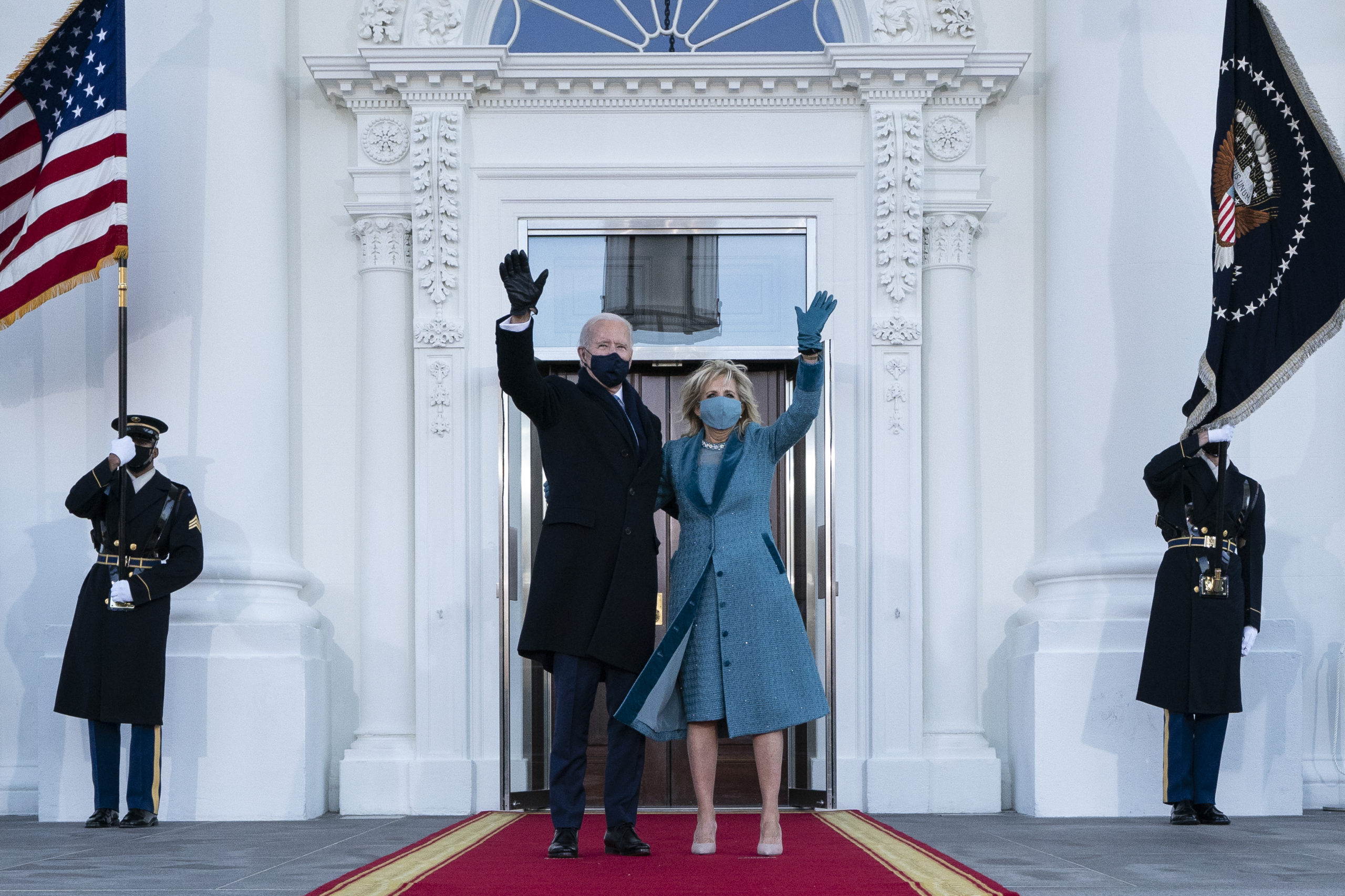 President Joe Biden and first lady Dr. Jill Biden wave as they arrive at the North Portico of the White House, on January 20, 2021, in Washington, DC. (Alex Brandon-Pool/Getty Images)

According to Deneen, Roman Catholic Americans have long found themselves at odds with non-Catholic, predominantly Protestant countrymen since Catholics look to the pope for ultimate direction — a figure who “commanded an allegiance that transcended national boundaries,” Deneen said.

American Catholics eventually sought acceptance in two ways, Deneen said: they either accepted that religious beliefs were private and had no bearing on public order, or they redefined their faith “in accordance with dominant liberal beliefs.”

“While often at odds with Catholic teaching, such beliefs could be called ‘Catholic’ because it accorded with the widely accepted liberal view that religious belief was entirely a matter of private conscience,” Deneen said. (RELATED: Biden Has Promised To Undo These Pro-Life Policies)

Biden and many other Catholic Democrats have “gravitated” to this idea, according to Deneen, who said it is not surprising that the press celebrates this conformity since most media conforms “entirely to the dominant assumptions of liberalism.”

The New York Times sparked a backlash on Jan. 23 when it claimed that “President Biden is perhaps the most religiously observant commander in chief in half a century,” and tweeted that “a different, more liberal Christianity grounds his life and his policies.”

President Biden is perhaps the most religiously observant commander in chief in half a century. A different, more liberal Christianity grounds his life and his policies. https://t.co/G27AWibfSe

The Times story also suggested that Biden’s policies mirrored those of the Holy Father, writing that “Mr. Biden’s policy priorities reflect those of Pope Francis, who has sought to turn the church’s attention from sexual politics to issues like environmental protection, poverty and migration.”

The publication did not mention Biden’s apparent departure from Catholic teaching on abortion or note that Pope Francis has repeatedly condemned abortion.  (RELATED: Media Calls Biden A ‘Devout Catholic.’ Where Does He Actually Stand With The Catholic Church?)

‘It’s Not Catholic To Be Catholic’

“For the next four years, as they expand abortion and prosecute nuns, we’ll be hearing this neat fiction that Democrats aren’t anti-Catholic, but the beloved community itself,” Pecknold said.

Liberal thinkers have long viewed Catholicism as a kind of “competitive faith” which must be “privatized, neutralized, or coopted,” Pecknold said.

“Catholics have used a variety of strategies for carving out freedom for the Church,” the theologian told the DCNF. “Joe Biden represents, however, the most disturbing kind of ‘compatibilism’ which eliminates tensions simply through rhetorically insisting that the Catholic Church teaches whatever the Democratic Party teaches.” 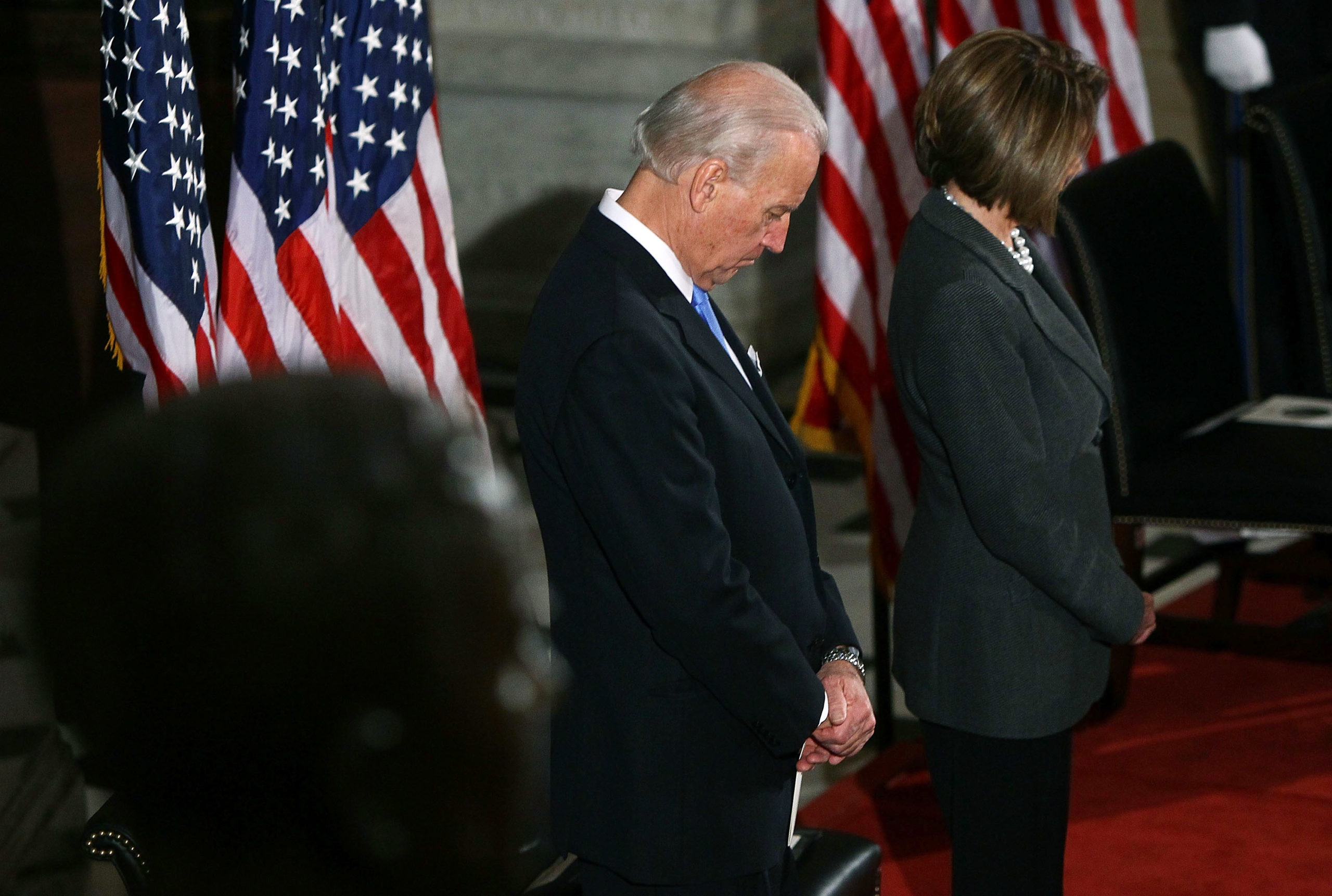 U.S. Vice President Joe Biden and Speaker of the House Nancy Pelosi bow their heads in prayer at a memorial service for Rep. John Murtha at the U.S. Capitol March 3, 2010 in Washington, DC. (Win McNamee/Getty Images)

Pecknold referred to an incident where Democratic Speaker of the House Nancy Pelosi “shamed pro-life Catholics for making the abolition of abortion their preeminent voting priority.” Pelosi said in January that pro-life support for former President Donald Trump “gives me great grief as a Catholic.”

Pelosi’s archbishop, San Francisco Archbishop Salvatore Cordileone, corrected Pelosi’s comments, saying, “Speaker Pelosi does not speak for the Catholic Church” and pointing out that the Catholic Church is strongly opposed to abortion.

“The greatest triumph over the Catholic Faith for the Liberal is not in burning Catholics at the stakes, but ensuring that they come to believe that their Catholicism is indistinguishable from liberal pieties,” Pecknold told the DCNF.

“As Joe Biden enacts law after law, executive order after executive order, the false impression will be given that liberal laws enjoy a kind of Catholic imprimatur,” he added, “and that is the prize that Democrats all in government and all across the media seek.”

Traditional Catholics: ‘The Enemy Of The Regime’

Media approbation of Biden’s Catholicism contrasts sharply to media treatment of Supreme Court Justice Barrett’s Catholicism. Barrett has been consistently questioned for her faith since her name was first floated as one of Trump’s potential Supreme Court picks in 2017.

Democrats, media outlets and activists fixated on Barrett’s adherence to Catholic principles and her large family, suggesting that she was “extreme” and unfit to serve on the Supreme Court. (RELATED: Media Outlets Link Catholic Group Associated With Amy Coney Barrett To ‘The Handmaid’s Tale’)

Deneen told the DCNF that Catholics who follow traditional Catholic teaching are viewed as “the enemy of the regime” whose faith represents “a hostile threat, a view of Catholicism that has remained consistent since the arrival of Catholics in the Protestant new world.”

“The faith of an Amy Coney Barrett must be vilified and denounced as outside the pale, unacceptable to the regime,” Deneen said. “In effect, they must be ostracized, excluded, defeated, even suppressed.”

Biden’s Catholicism has also sparked discord within the Catholic Church. The president of the United States Conference of Catholic Bishops (USCCB) rebuked Biden for his support for abortion in an inauguration day statement.

Other church leaders criticized this statement and argued that focusing on Biden’s pro-abortion policies reduces Catholicism to a “single issue.”

Clergy like Jesuit James Martin, a frequent critic of former President Trump, suggest that Biden’s policies do not put him at odds with the church but merely present “a different way of being Catholic.”

San Diego Bishop Robert McElroy says he sees some US bishops using abortion as a litmus test when it comes to judging the faith of Catholic politicians, warns that “such a position will reduce the common good to a single issue.” #BidenBishopsFrancis pic.twitter.com/t0a9nuvzql

Martin declined to comment for this story to the DCNF.

“I think I’ll pass on commenting, since it gets into questions about his own personal faith, which I tend to avoid,” he said. Pressed to address why media figures call Biden devout when he publicly advances policies contrary to Catholic teaching, Martin responded, “Oh I think I’ll pass on that one too.”

Jesuit Fr. William Kelley, who recently said mass for the newly elected president at Holy Trinity parish in Georgetown, also declined to comment for this story.

“I would prefer not to comment on the president’s status as a devout Catholic,” Kelley told the DCNF. “I do not really know him.”

Comparing Biden and Barrett, Martin told NPR: “They’re both Catholic, and they’re both sincere in their Catholicism.”

“I think that the, shall we say, the more traditionalist side has been more active and perhaps more — I don’t want to say loud — but maybe public about their faith,” Martin continued. “And I think people tend to forget about the progressive side that I think President Biden probably more fully reflects than Justice Barrett.”

Martin did not express the fears of other clergy and theologians that Biden will negatively impact Catholicism and religious freedom in the United States, but instead expressed hope that the U.S. will experience “a more Catholic culture.”

“Well, certainly his faith in Jesus is going to help him, you know, look at problems with the poor,” he said.

“Hopefully, you know, he’ll be considering what Pope Francis had said on the environment and on other issues,” Martin continued. “But I think you’re also going to see a more Catholic culture — I think, you know, references to the saints, to the sisters he knew, to going to Mass. You know, President Biden is someone who speaks personally very frequently, and a big part of his personal life is his faith. And so, you know, get ready for at least four years of more Catholic culture.”

Not all clergy refrain from condemning the new president, however. (RELATED: ‘We Cannot Stay Silent’ On Biden’s Pro-Abortion Stances, Leading Catholic Bishop Says)

After D.C. Archbishop Wilton Gregory said he would not deny Biden communion at Mass in late November, Fr. Daniel Gee, pastor at St. Rita’s Catholic Church in Alexandria, Virginia, told the DCNF that he would “absolutely not” give Biden communion if the new president were to attend his church.

“Why would I consider someone who is so publicly opposed to the Church’s teachings and so actively working against them to be in communion with us,” Gee told the DCNF. “He is an enemy of the unborn and has flaunted the Church’s teachings for the last 40 years. How dare he even present himself in the first place?”