A group of House Republicans will introduce a resolution to try and have Democratic Minnesota Rep. Ilhan Omar removed from her committee assignments as Democrats continue to call for Georgia Republican Rep. Marjorie Taylor Greene to be removed from hers.

Republican Reps. Brian Babin, Jeff Duncan, Jody Hice, Andy Biggs and Ronny Jackson sponsored the proposed amendment which calls for Omar to be stripped of her committee assignments due to anti-Semitic comments she has made in the past, Fox News reported. Omar apologized to a group of Jewish organizations in a phone call in 2019 after she received criticism for a tweet that many considered to be anti-Semitic.

“House Democrats have embarked on a dangerous slope in attempting to punish a Republican Member of Congress for thoughts and opinions she shared as a private citizen before being sworn into office. Holding Congresswoman Marjorie Taylor Greene accountable for statements that she made before running for Congress, while not being willing to hold sitting Democrat Members of Congress accountable for their offensive and intemperate statements is another example of blatant hypocrisy by Congressional Democrats,” Biggs told the Daily Caller when asked about the proposed amendment.

“If Democrats proceed with their authoritarianism, Republicans should reciprocate by removing Democrat members who have violated the House rules of decorum and principles of American decency while serving in this body. Congresswoman Ilhan Omar has shared anti-Semitic sentiments while serving in the House of Representatives, and she should be one of the first Members held to the standard that Democrats are setting this week,” Biggs continued. 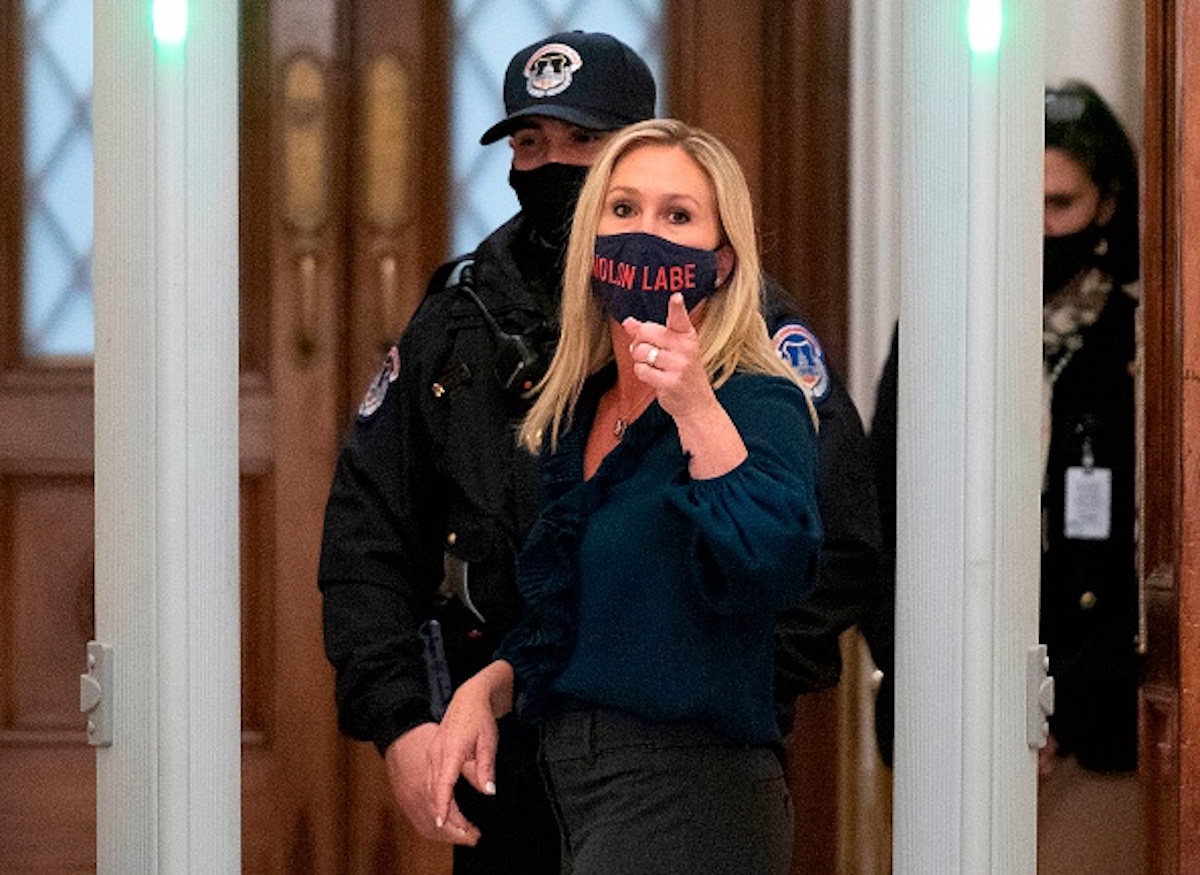 Representative Marjorie Taylor Greene (R-GA) shouts at journalists as she goes through security outside the House Chamber at Capitol Hill in Washington, DC on January 12, 2021. (Photo by ANDREW CABALLERO-REYNOLDS/AFP via Getty Images)

“It is my hope and expectation that Republicans will do the right thing and hold Rep. Greene accountable, and we will not need to consider this resolution,” House Majority Leader Steny Hoyer said. “But we are prepared to do so if necessary.” (RELATED: Parkland Mother Makes Emotional Plea For Marjorie Taylor Greene To Disavow Conspiracies)

Greene has continued to claim that Trump won the Nov. 3 presidential election and has been linked to a number of conspiracy theories, including QAnon related conspiracies. (RELATED: Chris Wallace Asks What It Means That There’s More GOP Outrage Over Liz Cheney Than Marjorie Taylor Greene)

Senate Minority Leader Mitch McConnell criticized Greene on Monday, calling her past comments “cancer” for the future of the GOP.

“Somebody who’s suggested that perhaps no airplane hit the Pentagon on 9/11, that horrifying school shootings were pre-staged, and that the Clintons crashed JFK Jr.’s airplane is not living in reality,” McConnell said in a statement. “This has nothing to do with the challenges facing American families or the robust debates on substance that can strengthen our party.”

Hoyer is planning on telling House Minority Leader McCarthy that Republicans have 72 hours to strip Greene of her committee assignments, or Democrats will bring the matter to the House floor, CNN reported.