People in eastern Europe are increasingly seeking asylum in the U.S. due to government restrictions on freedoms including religion, speech and personal expression, the founder of an immigration consulting firm told the Daily Caller News Foundation.

A significant amount of people from Russia and Belarus have contacted the Second Passport, an immigration consulting firm, about applying for asylum in the U.S. Recent protests in support of Russian opposition leader Alexei Navalny have spurred another spike in people seeking assistance applying for asylum, Yury Mosha, the founder and CEO of Second Passport, told the DCNF.

“Right now, people are telling us that they are scared of being put in jail for their opinions about the protests. They are going to protests and meetings, but it is a risk. Some people only posted on social media, and they received calls from the police to scare them,” Mosha told the DCNF.

Mosha’s assistant Jennifer Katsov told the DCNF that “there’s a lot of government regulation to what you do. You’re being watched constantly and if you say anything that is against what the government believes then you’re going to be prosecuted in various ways which is essentially just going to jail because they don’t have a court of law like the U.S. does.” 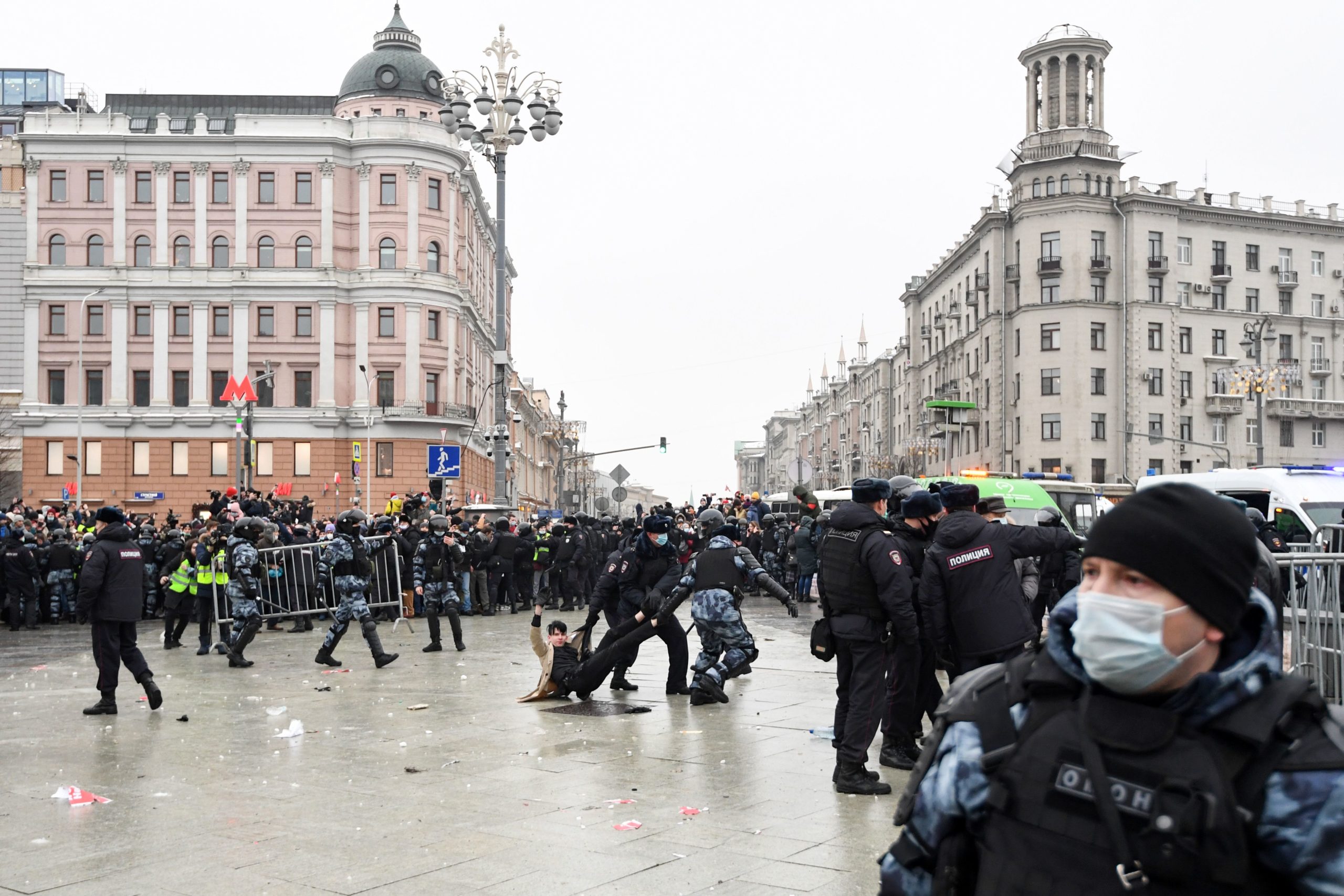 Police detain a protester during a rally in support of jailed opposition leader Alexei Navalny in downtown Moscow on January 23, 2021. (NATALIA KOLESNIKOVA/AFP via Getty Images)

Every day for the last two weeks between 30 and 50 people have submitted requests to the company citing the protests as their reason for wanting to leave Russia, Mosha told the DCNF. However, he said that people are not able to come to the U.S. because the U.S. Embassy “is not working.”

A press spokesperson from the U.S. Embassy in Moscow told the DCNF that “our Consular Section is working hard on emergency U.S. citizen services and emergency visa requests. Unfortunately, we are limited by minimal staffing due to lack of visas for U.S. staff, and restrictions necessary to keep everyone safe during the pandemic.”

Navalny, 44, has been a regular critic of Russian President Vladimir Putin and led nationwide protests against him, the BBC reported. He attempted to run against Putin in 2018 and was prevented due to a court conviction, but he rose to prominence by blogging about corruption at Kremlin-controlled corporations.

He spent several months in Germany recovering from a poisoning attack he blames on the Russian government, according to the BBC. It was determined that he had been poisoned with Novichok, a chemical weapon developed by the Soviets during the Cold War, the Kremlin has denied involvement in the attack.

Anti-Kremlin demonstrations followed Navalny’s detention, crowds fought with law enforcement and over 100,000 people participated during the first weekend of protests, The Wall Street Journal reported. “The reason for the protest is different for each protester,” political analyst Konstantin Kalachev said, The WSJ reported.

An estimated 100,000 people attended demonstrations during the first weekend, over 3,700 people were detained and over 40% of participants were protesting for the first time, according to The WSJ. Over 5,000 people were detained during the second weekend of unauthorized protests after a court sentenced Navalny to prison, though the overall turnout was smaller than the week before, the BBC reported.

“People are more scared of the fact that they don’t see a decent future for themselves,” said Evgeniya Ragozina, 28, The WSJ reported. “That’s why I will be [protesting] until the end of Putin’s political regime.”

Kremlin officials characterize Navalny as an agent of the U.S. and its allies who need him to destabilize Russia, The WSJ reported. Putin is supported by Russian security forces and the judiciary, so he is able to wait out the unrest as Belarusian President Alexander Lukashenko did when people called his election fraudulent.

“In Russia, there is only one party in reality. While there are others, they have no power. Putin is the only option for election,” Mosha told the DCNF. 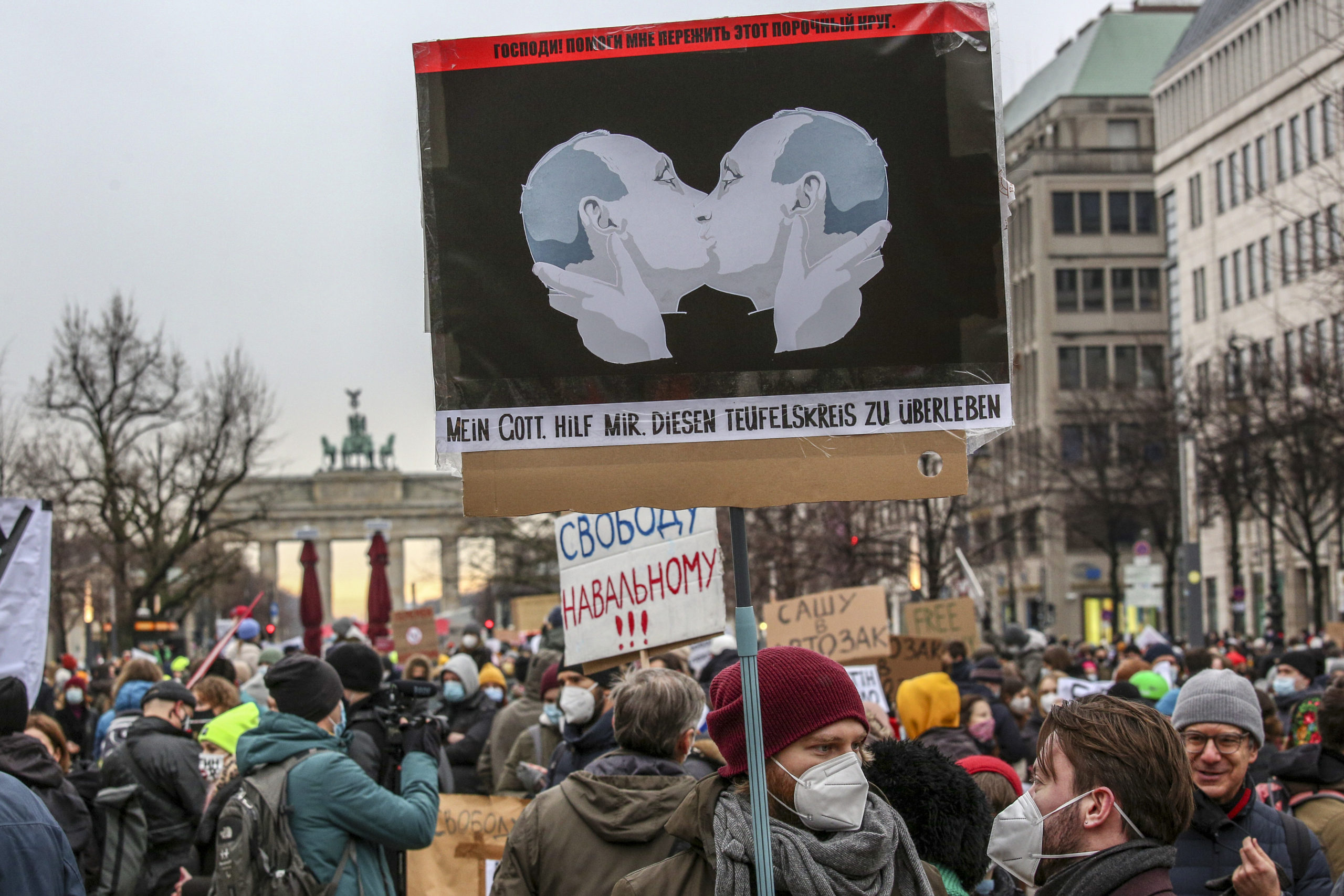 Some 2500 supporters of Russian opposition politician Alexei Navalny marched in protest demand for his release from prison in Moscow on January 23, 2021 in Berlin, Germany. (Omer Messinger/Getty Images)

Why people want to leave Russia

Around 40% of Russian citizens between the ages of 15 and 29 said they would leave the country if they could, according to a 2019 Gallup poll. One in five Russians expressed a desire to leave the country, and 40% of adults who said they did not approve of Putin’s job performance in 2018 would like to migrate.

“The perfect citizen in the government’s eyes is basically anyone who minds their business, doesn’t speak out against the government, will follow what Putin says and not question it, people who are easily swayed by propaganda — basically the goal is to recreate the Soviet Union, especially for Putin, to have people follow them blindly,” Mosha told the DCNF. 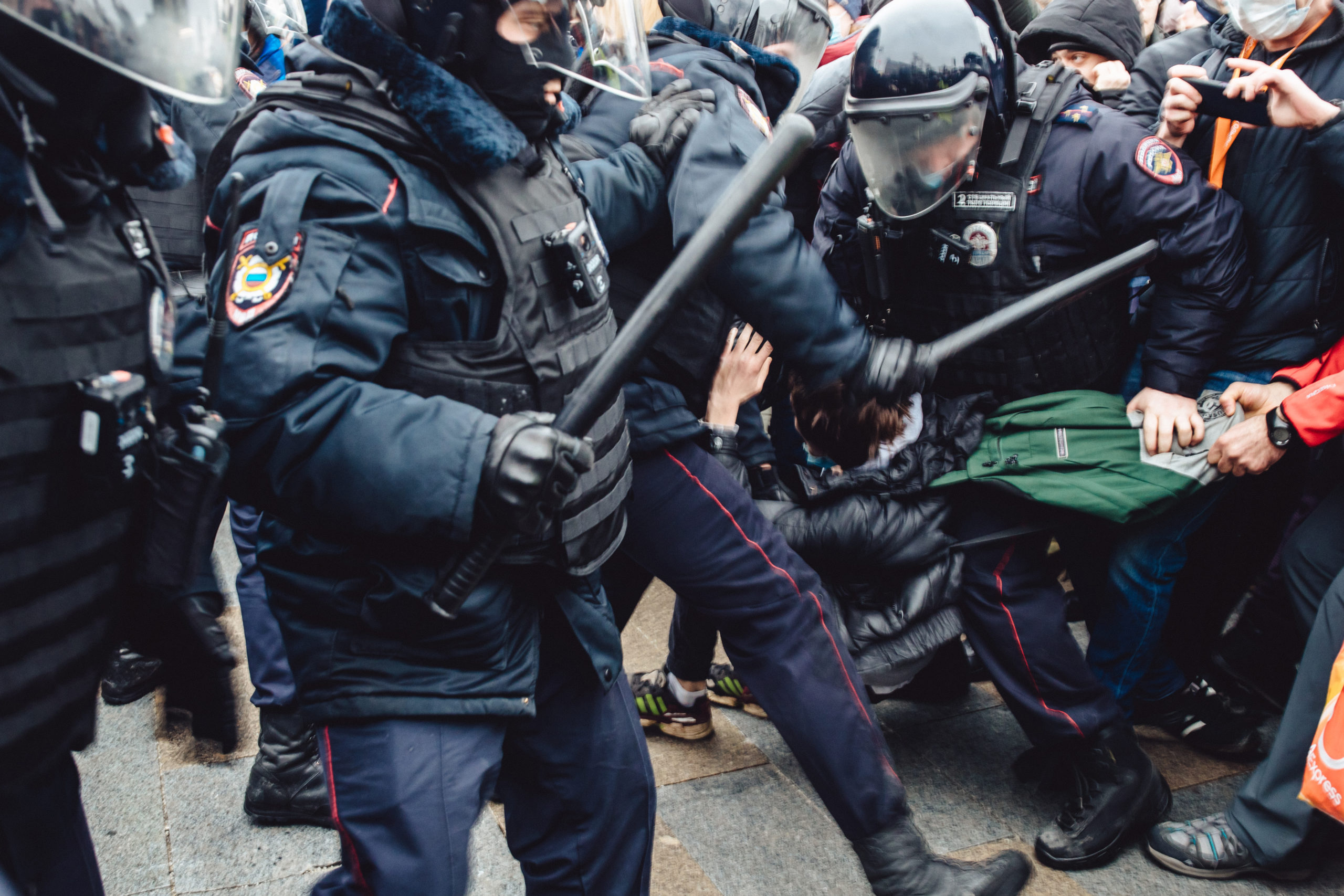 Police detain protesters gathered at Pushkin Square on January 23, 2021 in Moscow, Russia. His arrest came one day after his return to Russia, following his poisoning with a nerve agent last summer. (Photo by Getty Images/Getty Images)

Minorities have been continually oppressed by the Russian government, according to Political Asylum USA. (RELATED: Amnesty International Condemns Russia For ‘Intimidation And Persecution’ Of Jehovah’s Witnesses)

“Everyone is persecuted by the government, every minority,” Katsov told the DCNF. She added that if a person’s skin is just a shade darker than the average, they’re looked at with skepticism, and someone believes in a religion that is not popular, they are looked down on for it.

Mosha said that “any minority is targeted, if you’re not believing exactly what the government is saying, if you don’t fit their exact idea of a citizen then you’re going to be at risk.

“If you’re part of the LGBTQ community it’s going to be a problem, if you believe in another religion it’s a problem,” Mosha told the DCNF.

Dozens of LGBTQ activists have received death threats from a group that claimed responsibility for the murder of Yelena Grigoryeva, an activist who was stabbed several times and whose body showed evidence of strangulation, NBC News reported.

Constitutional amendments were adopted on July 1, 2020, that defined legal marriage as between a man and a woman, NBC News reported. Gay pride parades were banned for 100 years in 2012 and “propaganda of nontraditional sexual relationships” among minors was outlawed in 2013.

The amendments will assure that Russia does “not to repeat the mistakes that exist in the West,” Parliament member Pyotr Tolstoy said, the Associated Press reported. “These mistakes, in my opinion, are fundamental, when certain people — the LGBT community or certain race groups — are being given additional, special rights. More rights than the majority.”

Putin defended the amendments, touting the decriminalization of same-sex relationships, NBC News reported. Same-sex couples are also prohibited from adopting children, though sometimes one person out of a couple will apply as a single parent. 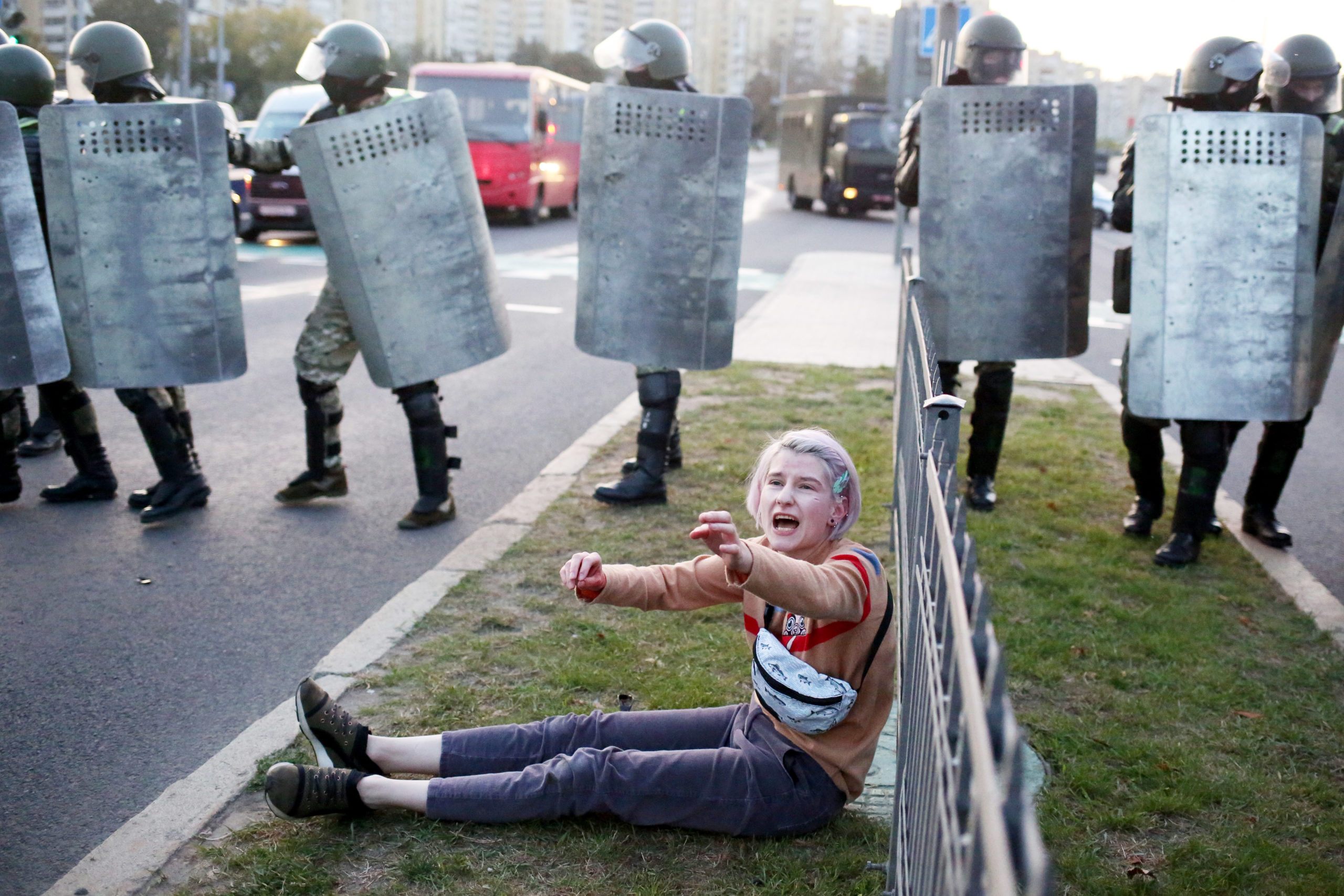 A woman reacts as she sits in front of law enforcement officers during a rally to protest against the presidential inauguration in Minsk on September 23, 2020. (Photo by -/TUT.BY/AFP via Getty Images)

An increase in people seeking asylum

The number of people contacting Mosha’s company double from January 2019 to January 2020, he told the DCNF. He said in the 10 years he’s run the business, he’s never received so many requests for help applying for asylum in the U.S.

Most of the firm’s clients are younger people who want to leave because they’re socially aware of their government’s policies and able to see other countries and freedoms through the lens of social media, Mosha told the DCNF. He added that some older individuals contact the company because “they’re sick of the country, they can’t do it anymore.”

Mosha said that in order to receive refugee status an individual has to claim they are experiencing political oppression. 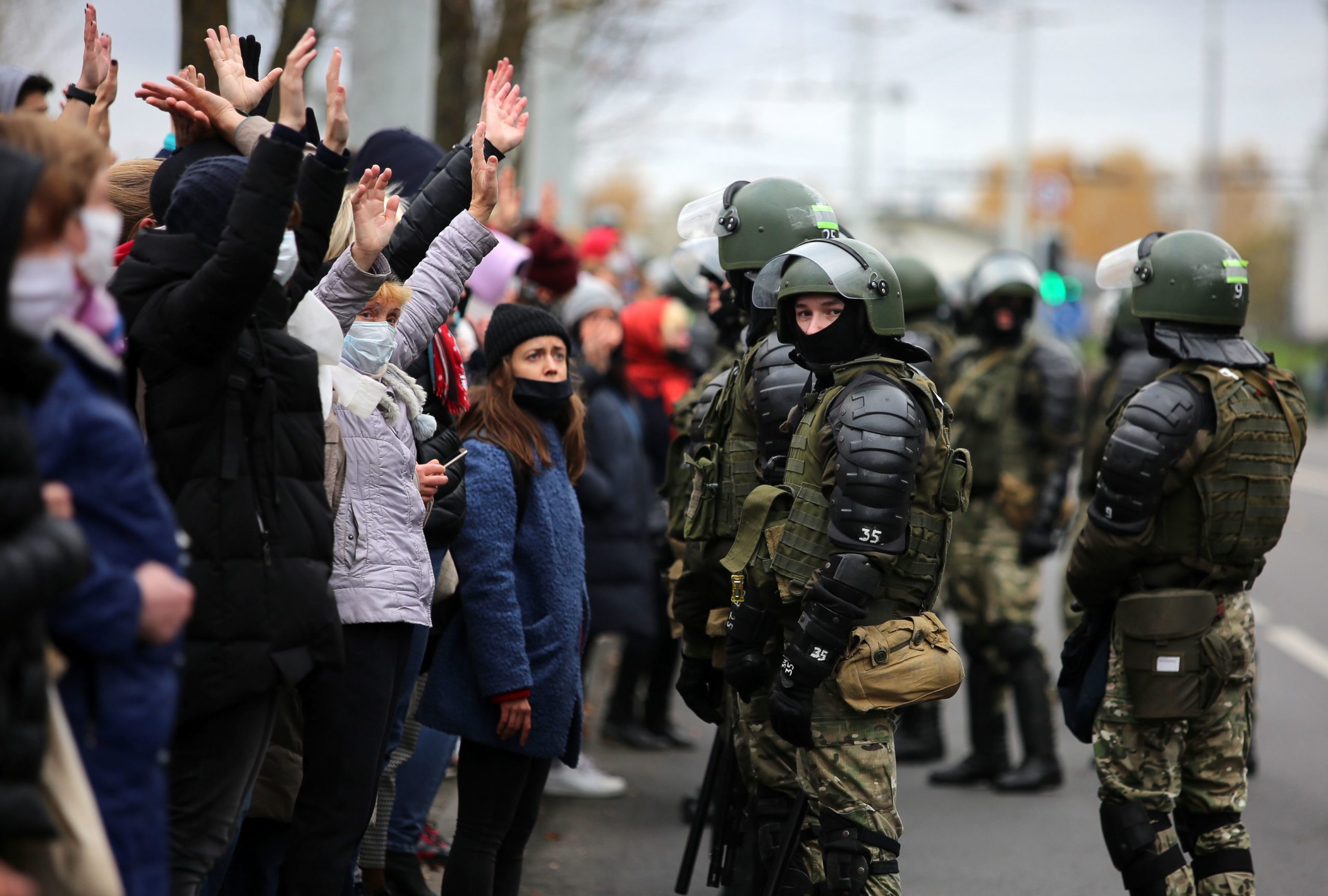 Law enforcement officers block protesters during a march of opposition supporters from central Minsk to a site of Stalin-era executions just outside the capital on November 1, 2020. (Photo by STRINGER/AFP via Getty Images)

Why people want to leave Belarus

Belarusians are seeking asylum due to an authoritarian government and because of media censorship, according to Political Asylum USA. Minorities are targeted by Belarusian officials who prohibit them from holding public events and arrest them illegally.

Around 3,000 people were arrested after violent clashes broke out in Minsk and other cities the night of the election, the BBC reported. Riot police responded to crowds with tear gas, batons, rubber bullets and stun grenades, all of which had never been used against crowds in Belarus.

Reports materialized alleging overcrowding and police brutality in jail, and many posted their injuries to social media websites, the BBC reported.

Over 30,000 people were detained during anti-Lukashenko demonstrations from August 2020 to December 2020, Reuters reported. At least 477 journalists were detained and 62 of them experienced violence from law enforcement in 2020, the Belarusian Association of Journalists reported.

Lukashenko assumed power in 1994, three years after the collapse of the Soviet Union, the BBC reported. He has attempted to preserve elements of Soviet communism such as maintaining state control over manufacturing, media channels and the secret police who still refer to themselves as the KGB.

Lukashenko called COVID-19 a mass “psychosis” and endorsed drinking vodka “to poison the virus” despite contracting it himself, CNN reported.

“It’s very, very difficult to be a free person” in Eastern Europe and conditions are “getting a lot worse, specifically the situation in Belarus, they have a really bad economic issue, a lot of political problems and it’s not getting any better,” Mosha told the DCNF. “People have gotten to the point where they’re sick of the country, they can’t do it anymore so they just want to get out.”