In a 230-199 vote, the House voted to remove Greene from the House Education and Budget committees.

Greene has continued to claim that Trump won the Nov. 3 presidential election and has been linked to a number of conspiracy theories, including QAnon related conspiracies. Greene gave a speech on the House floor Thursday after a Wednesday night meeting with House Republicans where she apologized for promoting conspiracy theories and reportedly was met with applause by many in the room.

House Minority Leader Kevin McCarthy said Wednesday that he would not remove Greene from her committee assignments.

“Past comments from and endorsed by Marjorie Taylor Greene on school shootings, political violence, and anti-Semitic conspiracy theories do not represent the values or beliefs of the House Republican Conference. I condemn those comments unequivocally. I condemned them in the past. I continue to condemn them today. This House condemned QAnon last Congress and continues to do so today,” McCarthy said in a statement released Wednesday afternoon. 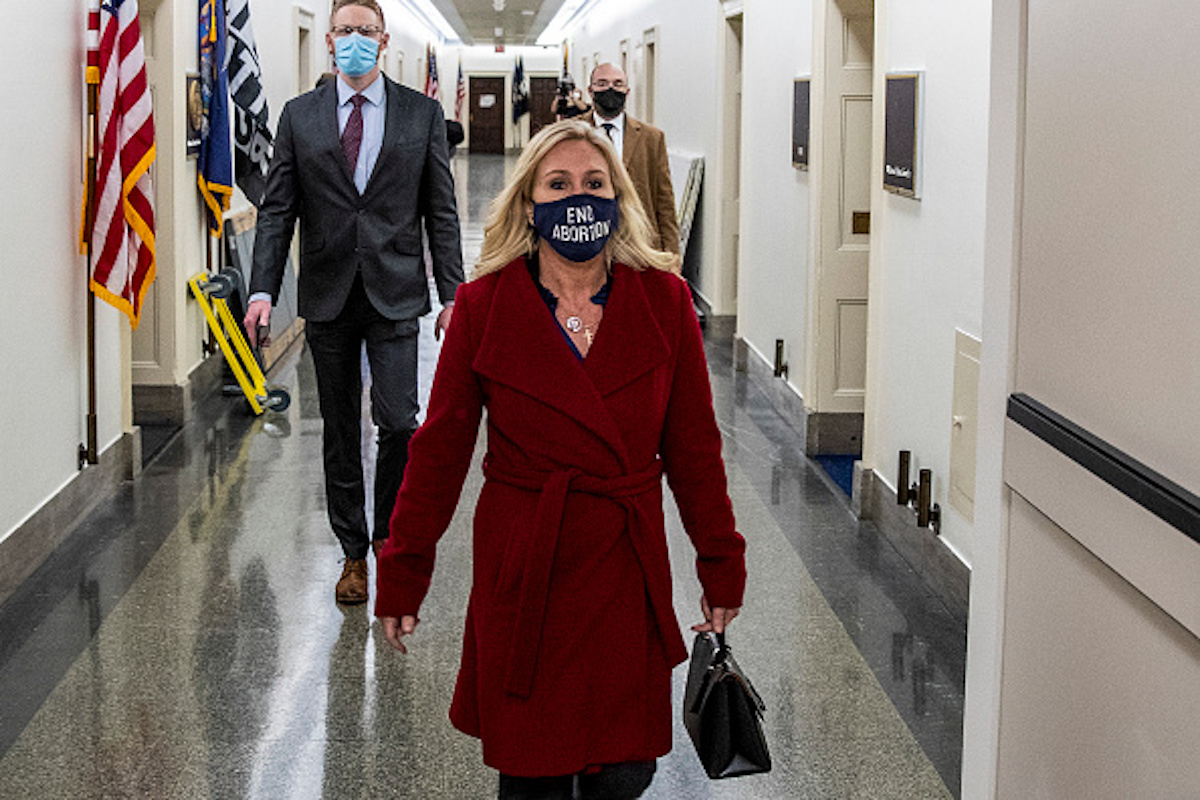 Rep. Marjorie Taylor Greene (R-GA) leaves her office at the US Capitol on February 03, 2021 in Washington, DC. (Photo by Tasos Katopodis/Getty Images)

“I spoke to Leader McCarthy this morning, and it is clear there is no alternative to holding a Floor vote on the resolution to remove Rep. Greene from her committee assignments,” House Majority Leader Steny Hoyer said Wednesday. (RELATED: McCarthy Will Not Remove Marjorie Taylor Greene From Committees, Will Back Liz Cheney In Leadership Role)

“Somebody who’s suggested that perhaps no airplane hit the Pentagon on 9/11, that horrifying school shootings were pre-staged, and that the Clintons crashed JFK Jr.’s airplane is not living in reality,” McConnell said in a statement. “This has nothing to do with the challenges facing American families or the robust debates on substance that can strengthen our party.” (RELATED: ‘The Media’ Is ‘Just As Guilty As QAnon’: Marjorie Taylor Greene Gives Speech Walking Back Old Comments)

Greene’s office did not immediately respond to the Daily Caller when asked about the vote.