House Speaker Nancy Pelosi made headlines for a part of the rule changes passed Jan. 4 that eliminated gender-neutral language. However, scrapping “mother” or “father” from House rules may ultimately pale in comparison to Pelosi’s decision to alter the “motion to recommit.”

The “motion to recommit” has existed since the first Congress, and for nearly a century has allowed the minority party to force votes on amended bills, according to The Wall Street Journal. Under Pelosi’s new rules, Republicans in the House minority will be able to only delay legislation, rather than force votes on alternatives. The recent rule changes are a continuation of House Democrats rewriting the rules to curtail the ability of Republican members to challenge progressive priorities since they took back the chamber in 2019.

The motion to recommit can be exercised in two ways. A “straight” motion to recommit sends a bill back to its respective committee if voted in favor by a majority of the members, according to Indivisible, a group devoted to resisting the GOP agenda who has decried House Republican’s use of the motion. A motion to recommit “with instruction” allows the bill to be amended on the spot, and is then subject to brief debate before it is voted upon. 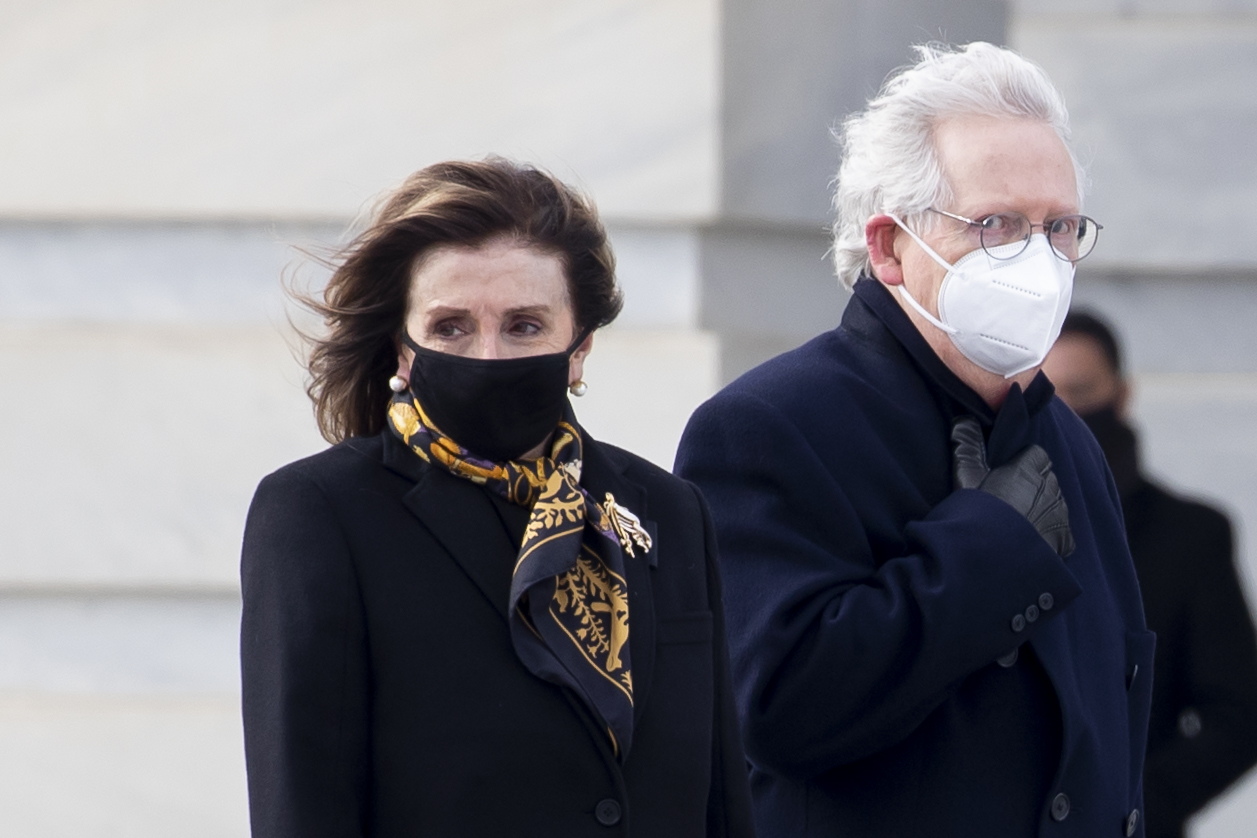 WASHINGTON, DC – FEB. 03: U.S. Speaker of the House Nancy Pelosi (L) and Senate Minority Leader Mitch McConnell, watch a police motorcade follow a hearse carrying the remains of the late Capitol Police officer Brian Sicknick who lied in honor in the Rotunda of the U.S. Capitol on Feb. 3, 2021 in Washington, DC. Officer Sicknick died as a result of injuries he sustained during the Jan. 6 attack on the U.S. Capitol. He will lie in honor until Feb. 3 and then be buried at Arlington National Cemetery. (Photo by Michael Reynolds-Pool/Getty Images)

Motions to recommit are rarely successful because they are typically brought by the minority party, but are nonetheless a valuable political tool. Under the rule changes, Democrats have essentially made every motion to recommit straight motions so that Republicans will only be able to send legislation back to its respective Democrat-controlled committee. (RELATED: What Does A GOP Nightmare Scenario Actually Look Like Now That Dems Control Congress?)

Democratic infighting broke out between moderate and progressive members of the Democratic caucus after Democrats lost seats in the 2020 election. Moderates claimed that their opponents were able to paint moderate Democrats with the slogans of the progressive left, such as “defund the police.” In the 116th Congress, Republicans were able to exercise the motion to recommit as a powerful tool for political messaging — votes they weaponized against Democrats during the election cycle, according to the Wall Street Journal.

Republicans also were able to add changes to legislation that garnered support from some moderate Democrats in order to get it through the House and on to the Senate, according to The Heritage Foundation. One such example being Republican’s addition to a piece of legislation to expand background checks on gun sales that said Immigration and Customs Enforcement (ICE) was to be notified when an illegal immigrant tries to purchase a firearm.

The provision passed the House thanks to 26 Democrats who voted in favor, the Wall Street Journal reported.

While that bill never passed in the Senate, the provision helped get Republicans on board while simultaneously getting hundreds of Democrats on record voting against a provision that would have held illegal aliens accountable for trying to buy firearms.

While the rule change was endorsed by the Congressional Progressive Caucus (because it will help progressives ram through more of their agenda without much Republican input), the change was suggested by moderate Democrats in competitive districts, as reported by the Wall Street Journal.

Democrats did not grieve the effective death of the “motion to recommit,” as they accused the Republican minority of using the motion to put Democrats in Catch 22s. “The only thing being taken away is their gotcha opportunities,” Majority Leader Steny Hoyer said of Republican’s grievances about the rule change, according to the Wall Street Journal.

WASHINGTON, DC – FEB. 4: Speaker of the House Nancy Pelosi walks from her office to the House floor at the U.S. Capitol on Feb. 4, 2021 in Washington, DC. The House is scheduled to vote on Friday evening on removing Rep. Marjorie Taylor Greene (R-GA) from committee assignments over her remarks about QAnon and other conspiracy theories. (Photo by Drew Angerer/Getty Images) 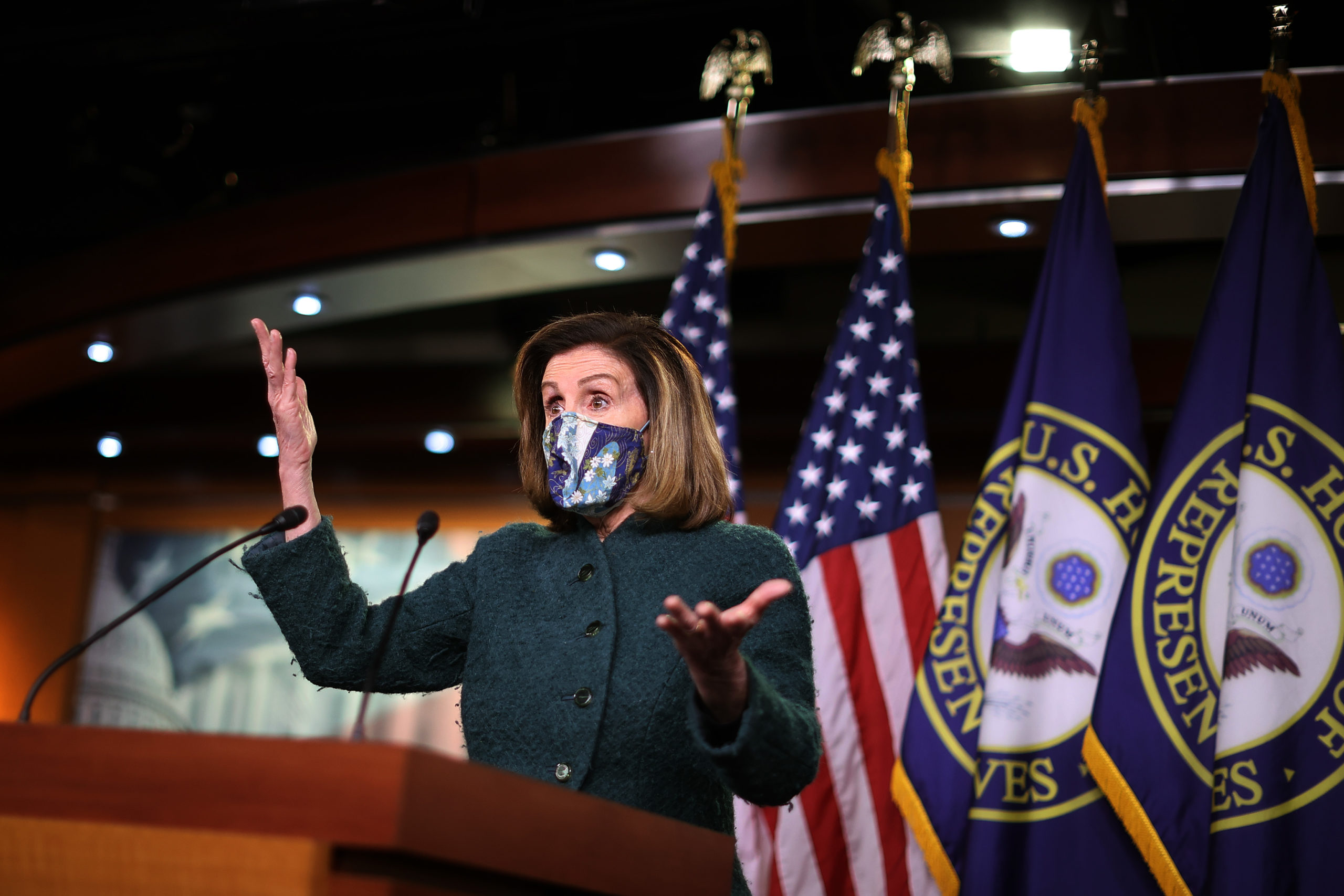 WASHINGTON, DC – JAN. 28: Wearing a face mask to reduce the risk posed by the novel coronavirus pandemic, Speaker of the House Nancy Pelosi (D-CA) holds her weekly news conference in the U.S. Capitol Visitors Center Jan. 28, 2021 in Washington, DC. When asked about what she means when she said Congress has an ‘enemy within,’ Pelosi said, ‘It means that we have members of Congress who want to bring guns on the floor and have threatened violence on other members of Congress.’ (Photo by Chip Somodevilla/Getty Images)

In a House Committee on Rules press release outlining the highlights of the rule changes, the committee claimed the reform is so that the motion to recommit “is no longer used to hijack the legislative process for political gamesmanship.”

Republicans claimed that Pelosi and House Democrats were scrapping a longstanding institution to save political face. “By watering down the MTR, the Democrat majority is just coming right out and admitting that they are unable to stand by their caucus’s radical beliefs,” Republican North Carolina Rep. Ted Budd told the Wall Street Journal. “This power grab won’t stop Republicans from standing up for what’s right throughout this Congress.”

Beyond changes to the motion to recommit, Democrats have also changed House rules so that broadly-defined coronavirus and climate change legislation are exempt from budget deficit controls, as reported by Roll Call. “Measures to prevent, prepare for, or respond to economic, environmental, or public health consequences resulting from climate change” and “COVID-19 pandemic” considered by the House will no longer need to abide by appropriations limits in relation to discretionary spending programs, or follow pay-as-you-go (PAYGO) for those that would impact tax revenues and mandatory spending, Roll Call reported. PAYGO is a budget rule that says new legislation does not increase projected budget deficits, according to the Tax Policy Center. Mandatory spending subject to PAYGO need to be offset by tax increases, the Tax Policy Center claimed.

When Democrats took back the house in 2019, they added tax cuts under PAYGO rules. Now, in the case of tax cuts, the loss of government revenue ought to be offset by spending cuts.

Despite PAYGO rules, publicly held U.S. Treasury debt is now larger than U.S. annual gross domestic product (GDP), and unfunded entitlement programs are even more than that, according to the Wall Street Journal. Congress has “skirted” PAYGO rules, according to The Heritage Foundation, given U.S. failure to curtail its deficit spending. The Wall Street Journal Editorial Board even went so far as to call PAYGO a “budget gimmick.”

Before Pelosi started waging war against “mother” and “father” and create a House Office of Diversity and Inclusion via House rules, she also used House rules to reform ethics, anti-harassment, and anti-discrimination trainings. In an attempt to curb President Donald Trump’s executive powers, Pelosi also forbade any motions to table legislation addressing the War Powers Resolution in 2019.