New York City experienced one of the bloodiest years on record in 2020, with murders and gun violence spiking to levels not seen in nearly a decade.

But what could account for the dramatic increase in violence when city data showed the overall crime levels were down?

Data shows there was a 97% increase in shootings, with 1,531 shootings recorded in 2020 compared to 777 in 2019, according to the New York Police Department (NYPD).  There was also a 44% increase in murders. While the NYPD attributed to the spike in violent and deadly crimes to “significant challenges” faced by the NYPD such as stretched resources  and the challenges the pandemic put on residents and officers, experts say that while it’s nearly impossible to pinpoint one answer, there is an overwhelming trend happening.

“I think we have a huge problem with narration,” Richard Aborn, president of the Citizens Crime Commission of New York City which is a non-partisan, non-profit organization studying public safety and criminal justice, told the Daily Caller.  “We have failed to send the message that while we are going to be much more understanding around low-level nonviolent offenders, we still intend to respond to violent crimes. If we don’t make that known, this kind of things continues.”

Aborn pointed to the first spike in violent crimes beginning in 2019, which saw shootings up 3% compared to 2018, according to The Daily News.

In 2019 the city also began to engage in what Aborn describes as “de-enforcement tactics” that stopped prosecuting people for marijuana or jumping fares and that the police force stopped making arrests for things like graffiti or loitering. The city also passed bail reform that went into effect Jan. 1, 2020.

“A lot of those became summonses,” he said. “I think there was a need to do a lot of that but the message wasn’t handled correctly. We didn’t calibrate the message correctly. The message went out that we were engaging in de-enforcement. But what it didn’t say was that it was targeted de-enforcement and the police would still be focusing on serious crimes.”

Even Democratic New York City Mayor Bill de Blasio and NYPD officials said there was a correlation with bail reform and the uptick in crime back in February of 2020, according to NY 1.

“We’re seeing a major increase in property crimes, in particular,” de Blasio said, according to the report. “And I’m the first to say, there’s never only one factor to anything. But there’s a direct correlation to the change in the law and we need to address and we will address it.”

By February the city had already seen the major crime index increase by 22.5% when compared to the same period in 2019, according to the report.

Police Commissioner Dermot Shea said the new law would force judges to release people even if they pose a risk to others, according to The New York Times (NYT).

“I think that, you know, with the passing of the new law, we saw a pretty, pretty dramatic increase in the people that were let out of Rikers in accordance with the law and that’s something that we will deal with,” he said, according to the report.

Shea and de Blasio, however, didn’t offer any analysis to support their reasoning, according to the NYT.

Darrin Porcher, a former Lieutenant with the NYPD and criminal justice professor at Pace University told the Daily Caller that for some criminals, it appeared that the police weren’t willing to enforce the law which created an incentive and helped create an uptick in crime.

“The regression of enforcement has created somewhat of a combustible situation where we have criminals acting with impunity because they feel the psychological aspect of big brother and the police being over their shoulder is not there.”

While Porcher notes the rise in violent crimes began in late 2019, he points to the NYPD’s reaction to the riots that ensued following the death of George Floyd for emboldening criminals even more.

“The rise in violent gun crime came during the time of the rise in the social justice movement, after George Floyd was killed. It seemed law enforcement and policing was in somewhat of a disarray and these criminal entities were able to capitalize and advance their agenda.”

City shooting spiked around 64% in May and then again skyrocketed in June when NYPD statistics showed a 130% increase in gun incidents.

“There was a matrix at work, it reached its apex after Floyds death but it started a gradual increase. A lot of politicians in New York City seemed as if they were willing to align themselves with the social just movement and they were blinded to the fact of the denigration of property–like that seen in City Hall during the Floyd protests– that were shutting down the city.” 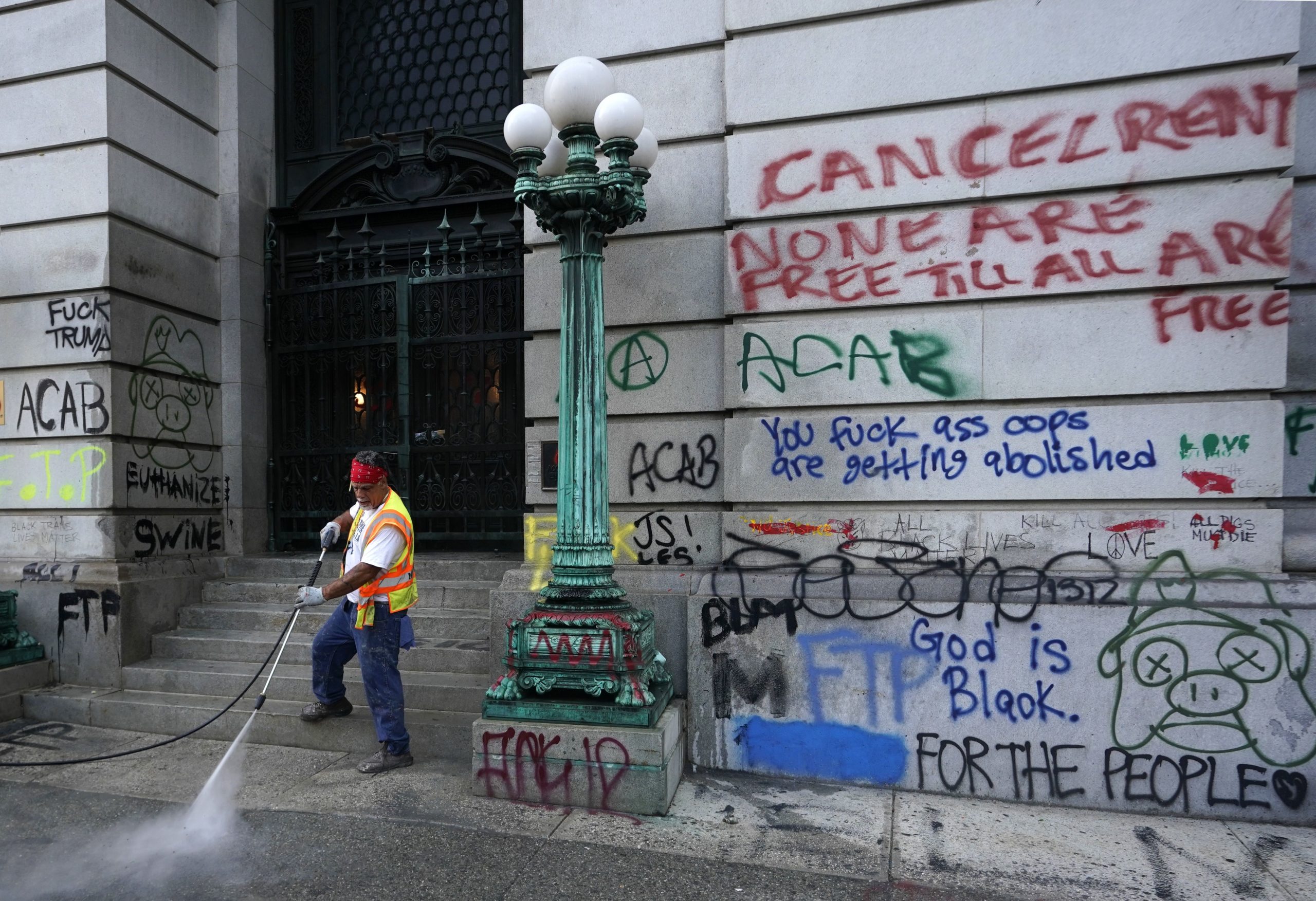 Sanitation workers clean up graffiti on July 22, 2020, after the Occupy City Hall protesters were cleared overnight by police –  ( TIMOTHY A. CLARY/AFP via Getty Images)

“The criminals saw this as an opportunity to embark on anti-social behavior and the elected officials put somewhat of a moratorium on enforcement in connection with these demonstrations which psychologically made a lot of criminals think ‘wow, if they’re not stopping these criminals from doing that, then we can go ahead and commit ABC’.”

“When people in a community see that nothing is being done, there’s no sense of correction with lower level offenses, then they graduate with higher offenses,” Porcher added.

Democratic Mayor Bill de Blasio, however, attributed the spike in crime to the pandemic during an interview on MSNBC.

“In New York City, we’ve been the safest big city in America for years. “We’ve had a very tough two months–no doubt– and it is directly related to the coronavirus– the dislocation it’s caused, the fact that our court system is not functioning yet, so many factors.”

Another factor that contributed to the rise in violent crimes, according to Porcher, was the disbandment of the NYPD’s anti-crime unit.

“This is 21st-century policing,” Shea said of his decision to disband the units, according to the NYT. “The key difference–we must do it in a manner that builds trust between the officers and the community they serve.”

Porcher, however, said these officers were crucial to getting illegal weapons off the streets and acting as a deterrent.

“You remove the anti-crime unit and you remove the omnipresent perspective in the impact zone and then what you’re left with is an appetite for destruction or a cocktail that leads to violence.”

“This is really a testament to Mayor Bill de Blasio’s inability to assess the tone of the crime patterns that have been plaguing the city,” Porcher said, noting minority communities have been predominantly affected by gang violence. “What makes an elected official a strong public administrator is their ability to tap the necessary talent and place them accordingly like in the police department.”

“De Blasio has the police commissioner, but he–on a regular basis– intercedes with policies that don’t run in line with 21st century policing. You have to let the police function the way they know best.”

Patrick Lynch, the president of the Police Benevolent Association which is the city’s largest police union said removing plainclothes officers was a proactive response that was needed, according to the NYT.

“Anti-crime’s mission was to protect New Yorkers by proactively preventing crime, especially gun violence. Shooting and murders are both climbing steadily upward, but our city leaders have clearly decided that proactive policing isn’t a priority anymore.”

Aborn said the budget cuts that decreased new hires combined with the spike in NYPD retirees created a lack of experience in the department especially when it came to gang violence, which officials have attributed as one of the spikes in shootings, according to the NYT.

“Experience matters, you have the most experienced people going out the door. You’re cutting off new people from getting hired so you’re putting an enormous strain on other officers,” Adorn said. “We need to take that message from retirees to heart, because most cops love being cops, they don’t do it for the money”

“When we look at the ‘defund the police’ movement, they were looking to extract billions from the budget and a lot of it involved hiring new officers. I think that sent a signal to criminals that they can act with impunity because you don’t have the afforded protections of public safety based on all the officers leaving and the lack of new hires.”

The NYPD saw an 87% increase in retirements for 2020 by October, according to Fox News.

Aborn and Porcher agree that to combat the rise in gun violence, there needs to be a focus on prosecuting criminals.  Porcher said the courts need to give people who are convicted of illegal gun offenses the maximum amount of time while Aborn says it is a matter of ensuring that those who do commit gun offenses are at least prosecuted in a timely fashion.

Both, however, are skeptical that violent crimes will decline anytime soon.

“I think the trend is going to continue in an upward trajectory because there hasn’t been a plausible solution on how to get crime rates to recede,” Porcher told the Daily Caller. “There needs to be an actual, plausible plan that addresses all the issues, and that strategy has not been presented.”