WASHINGTON, D.C. — Uighurs protested outside the State Department on Friday asking that the U.S. government boycott the 2022 Beijing Olympics and to prosecute Chinese ambassadors for genocide.

They said between 2,000 and 3,000 undocumented Uighurs live in the U.S. and asked that they receive permanent resident status. 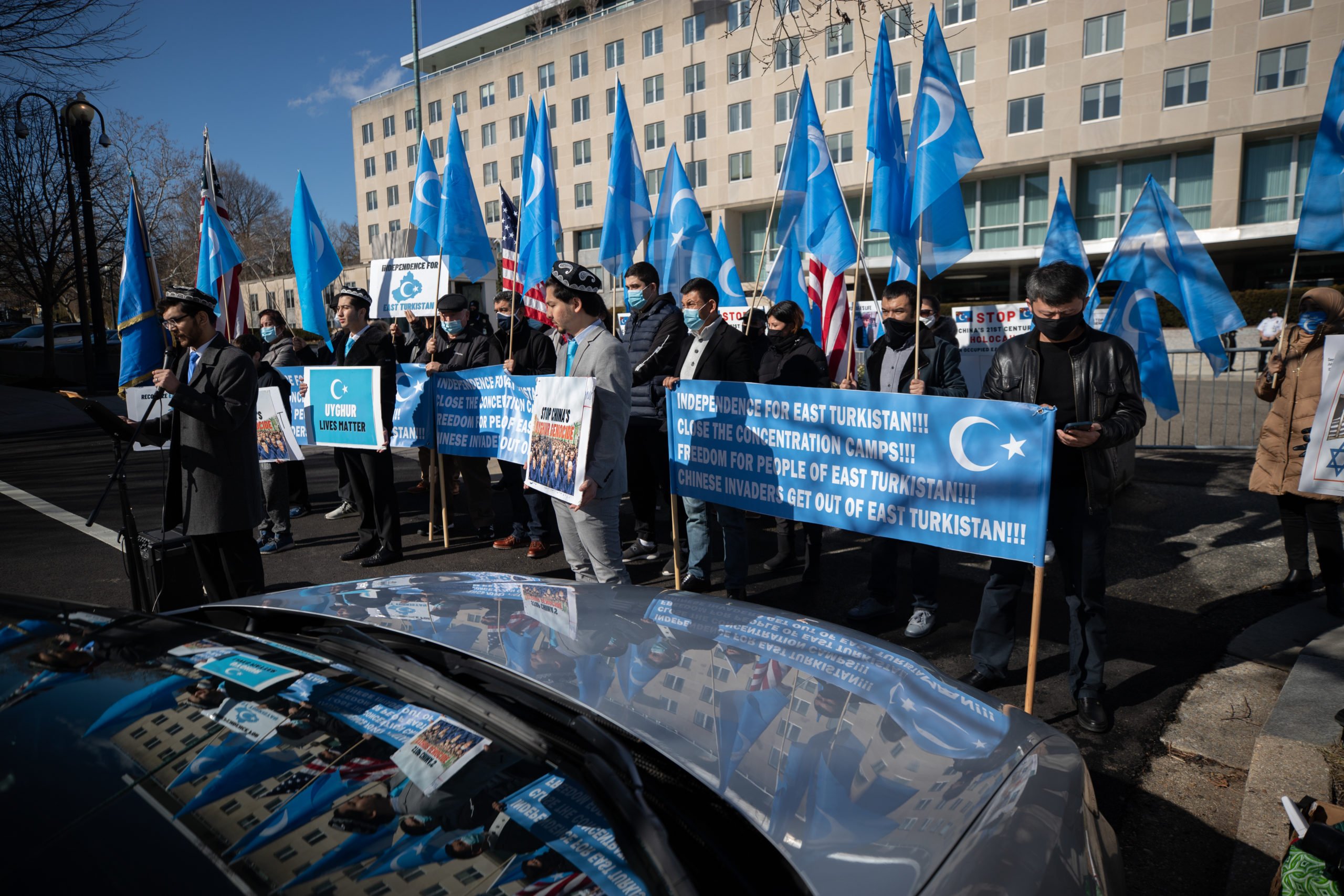 Uighurs protested against the upcoming Beijing Olympics and asked the U.S. government to continue helping the Uighur people in Xinjiang, Chia, outside the State Department in Washington, D.C. on Feb. 5, 2020.

“China is a threat to America. We hope that the U.S. implements its own laws and punishes Chinese officials,” a woman named Mahira told the DCNF. She did not give her last name because she feared repercussions.

“We don’t want what is happening to us today to be what will happen to America tomorrow,” Mahira said.

Most of the Uighurs in the U.S. aren’t able to contact their families who are stuck in concentration camps in Xinjiang, she told the DCNF.

“A lot of kids are afraid to show up to protests because they are scared of what will happen to their families,” Mahira’s daughter, Sarah, told the DCNF. She broke down in tears as she spoke.

“They’re just so scared to speak in public because the Chinese government will send them threatening messages, threatening their families over social media,” Sarah said. “They’re all wanting to speak about what is really happening to them, but they’re afraid of what will happen to their families. So, the U.S. government needs to help these kids.”

Millions of people, including Uighur Muslims, were sent to concentration camps in 2014 and were faced with forced sterilization, labor, and other forms of torture under Chinese occupation, Hudayar said. Over one million people in the region have been detained by the Chinese government, according to the Council on Foreign Relations.

“Time is running out for East Turkistan and its people,” Hudayar told the DCNF. “Our women are being systematically raped and sexually abused by Chinese forces in East Turkistan. Men are being killed, organs are being harvested and our children have been forcibly taken away from us and sent to state-run orphanages to be raised as loyal Chinese citizens.”

Hudayar said that boycotting the 2022 Olympics would be more significant than a diplomatic statement and that it would affect China’s political and economic standing with other countries. (RELATED: Investigation Finds That China Uses Uighur Labor To Produce Masks: Report)

“The Olympics would be one thing China uses to show off its prestige. So this would be hitting back against China prestige saying ‘we’re boycotting this because you are engaging in genocide,'” Hudayar told the DCNF.

The East Turkistan region, known as the Xinjiang Chinese autonomous region, has been under the control of several different empires and dynasties over the last 100 years, according to Hudayar. If the U.S. declares East Turkistan an occupied country, then it would be subject to international law and the Chinese control over the region would be considered illegal, he said.

“The only way we can truly end this genocide in East Turkestan is if we restore our country’s independence because over the past 100 years we have had multiple Chinese administrations, not just the [Communist Party of China] today. All of them have engaged in the same atrocities, except in the CCP is much worse on a much larger scale,” Hudayar told the DCNF.

“My judgment remains that genocide was committed against the Uighurs and that hasn’t changed,” Blinken said.

The CCP has labeled Uighur Muslims as enemies of the state and forces them into camps where they are given medication, tortured and forced into labor, according to Hudayar.

Azat Mahmut Srekashdari said he attended the demonstration in remembrance of the people who were killed in the Ghulja Massacre, which he said he witnessed.

He said young people participated in peaceful demonstrations on Feb. 5, 1997, and the Chinese government responded by spraying people with cold water causing over 400 deaths. Between 300 and 400 people were arrested and hosed down with icy water and kept in an open amidst freezing temperatures for around two hours, according to Amnesty International.

Srekashdari told the DCNF that he fled to America shortly after to provide a better life for his children. He said 78 members of his family have been jailed since 2016, and many of them received 20-year sentences for telling other Uighur’s about how amazing America was after visiting for a wedding.

A private security guard with Intercon told Hudayar that there was no one inside the State Department building who could respond to the concerns of the group.