A pro-life leader at the Catholic University of America resigned from her position Monday, saying that the university chaplain “pressured” her against her “conscience” to cancel a speech by pro-life activist Abby Johnson.

Cardinals for Life booked Johnson — who resigned from a Planned Parenthood clinic and became a pro-life activist — over two years ago. But the group decided this week to cancel her speech after saying she understood if police profiled her adopted, biracial son.

“I am writing today to inform you that I am resigning from my position as President of Cardinals for Life at the Catholic University of America, effective immediately, because of how I was pressured, against my conscience, by the University Chaplain in his capacity as adviser to Cardinals for Life, into making a decision to postpone indefinitely an event with Abby Johnson,” Anna Stephens, a Catholic University senior, wrote in a letter sent to school President John Garvey and obtained by the Daily Caller News Foundation.

The school’s chaplain is Fr. Jude DeAngelo. DeAngelo, who also heads Campus Ministry, did not immediately respond to a request for comment.

In a Monday evening statement to the DCNF after this story was published, President Garvey said that though Cardinals for Life cancelled Johnson’s speech, College Republicans had volunteered to sponsor her.

“The event will take place as planned,” Garvey told the DCNF. “An event for students who oppose Ms. Johnson’s presentation will be held at the same time.”

CUA College Republicans President Blayne Clegg confirmed to the DCNF that the group will host Johnson.

Stephens wrote that the event had already been approved by the university and was “in keeping with our organization’s mission of defending the most vulnerable unborn from the moment of conception to the moment of natural death.” (RELATED: EXCLUSIVE: SBA Hid Comms With Planned Parenthood Amid GOP Criticism Over PPP Loans)

Though she said it had been “one of the greatest honors” to lead the pro-life group, Stephens said that she found that she could not “in good conscience” stand behind the group’s decision to cancel Johnson’s speech. 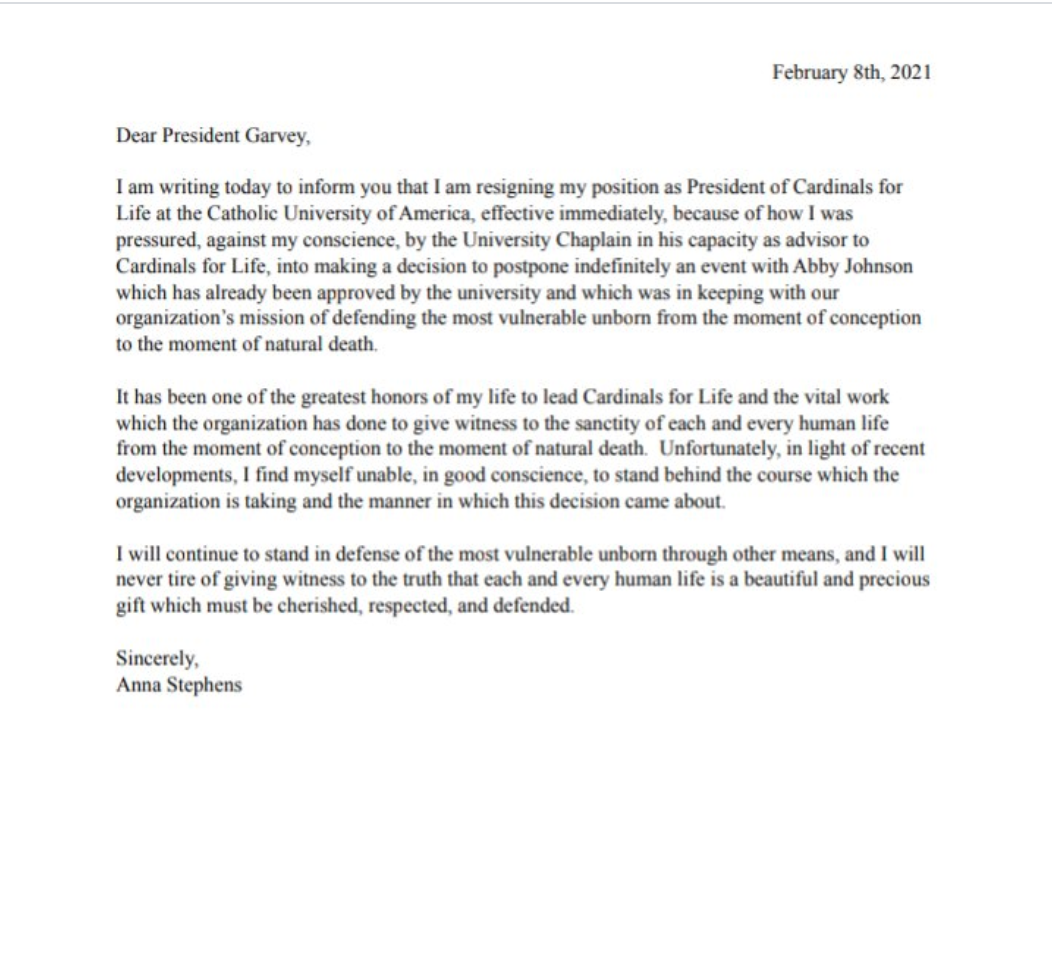 In a message posted to Instagram earlier this week, DeAngelo begged forgiveness from the university community for “failing to foster dialogue” and for not including the university’s cultural groups in discussions about whether Johnson should speak.

Johnson came under fire over the summer for comments she made about police profiling and her adopted, biracial son. As she discussed fatherhood and racial division in the United States, Johnson said she would understand if police officers profiled her biracial son when he grows up because her “brown son is more likely to commit a violent offense” than her white sons.

“Because of the statistics that these police officers know in their head, they’re going to know that statistically, my brown son is more likely to commit a violent offense over my white sons,” Johnson said. (RELATED: Former Planned Parenthood Director Describes The Abortion That Changed Her Mind)

Johnson continued: “So the fact that in his head he would be more careful around my brown son than my white son. That doesn’t actually make me angry. That makes that police officer smart because of statistics.”

She did not immediately respond to a request for comment from the DCNF. 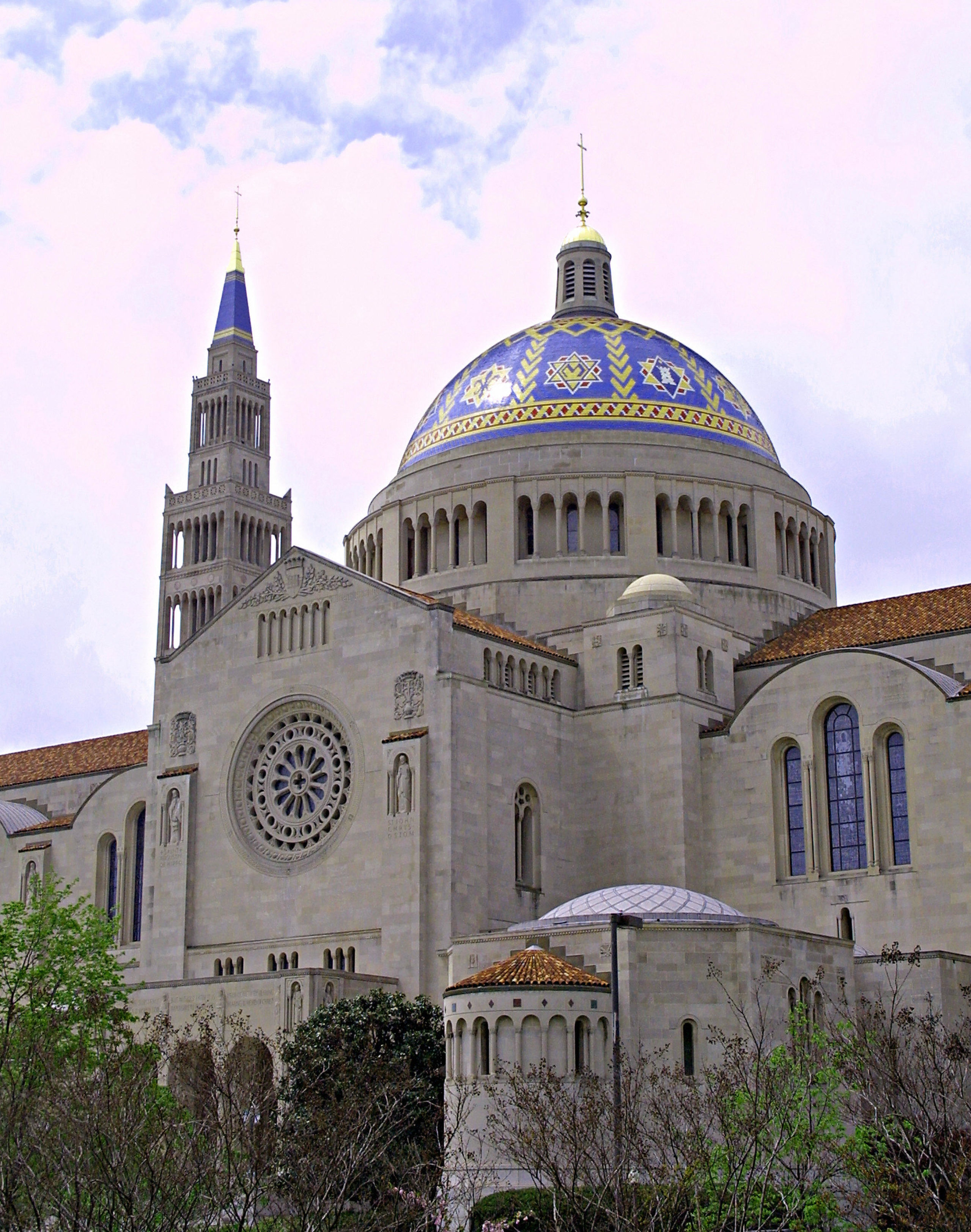 This 23 April, 2005 photo shows the Basilica of the National Shrine of the Immaculate Conception in Washington, DC. (Photo credit  KAREN BLEIER/AFP via Getty Images)

Johnson said in a Monday night Facebook post that she would speak for Catholic University’s College Republicans instead, since Cardinals for Life “decided to cave to liberal pressure and cancel the event.”

Johnson blamed “liberal ‘Catholics'” and said her event was cancelled because she supported President Donald Trump. The pro-life activist praised Stephens as a “legend for standing up for what’s right.”

“I mean, if these are people who supported my work, I would say that I’m doing something wrong,” she continued. (RELATED: Here’s Why Media Calls Biden A ‘Devout Catholic’ According To Theologians, Commentators)

Catholic University student and Cardinals for Life co-service chair Catrióna Fee told the DCNF that she is “extremely disappointed” in the group’s decision to cancel Johnson’s event, adding that she is “very concerned for the broader implications this creates for the future of bringing speakers to Catholic University.”

“We were going to host Abby Johnson because of her powerful testimony of conversion from working at Planned Parenthood to being one of the top pro-life voices in the nation,” Fee told the DCNF. “It seems the new standard at Catholic University to bring a speaker is that the hosting organization must endorse everything they’ve ever said, regardless of the context.”

Fee expressed frustration with then “excessive pressure” from DeAngelo “that led the Cardinals for Life executive board to cancel this event.”

“This bullying from campus ministry caused our president, one of the best leaders Cardinals for Life has ever seen and a close friend of mine, to step down from her position,” she said. “I hope this event will lead Catholic University to reaffirm its commitment to free speech and unwavering support for the pro-life movement.”

Clegg, the president of CUA’s College Republicans and a sophomore political science major, told the DCNF that his group decided to host Johnson after “witnessing a coordinated campaign” to cancel her speech.

“This decision is not an endorsement of every statement or action Johnson has made, nor is the speech focused on the issues that concerned students have brought up,” he said.

“I refuse to live in a world where Democrats and Republicans can regularly stir up enough anger and outrage that we can cancel each other’s events or speakers,” Clegg told the DCNF. “My club and I are committed to a culture of free speech and civil dialogue, and I don’t care if that makes people angry. I’m not going to bow; Johnson will be speaking.”

Catholic University is the national university of the Catholic Church in the United States, founded by the U.S. bishops with the approval of the Holy See.