The Lincoln Project is scrambling following reports that its members knew of sexual misconduct allegations against co-founder John Weaver as early as June of last year.

The group published co-founder Jennifer Horn’s private messages with 19th News correspondent Amanda Becker, then deleted the tweets Thursday evening after backlash. The series of messaging shows Becker and Horn discussing, mostly off the record on Horn’s part, Horn’s reasons for leaving the Lincoln Project, her compensation and other Lincoln Project co-founders.

It is not immediately clear how the Lincoln Project obtained Horn’s messages. The Lincoln Project has not responded to requests for comment from the Daily Caller News Foundation. (RELATED: Lincoln Project Said It Was ‘Shocked’ About Weaver’s Conduct, But They Reportedly Knew Of Sexual Misconduct Allegations In June)

“Recently published stories about the Lincoln Project are filled with inaccuracies, incorrect information, and reliant exclusively on anonymous sources,” the Lincoln Project said in a Thursday night statement. “However there is a central truth in all of them that must be reckoned with and that is John Weaver’s appalling conduct and the abuse he inflicted upon people.”

The group promised that it is organizing a review of Weaver’s relationship with the Lincoln Project and announced that anyone who believes their non-disclosure agreement prevents them from sharing important information about Weaver should contact the Lincoln Project for a release.

“Earlier this evening, we became aware that @AmandaBecker of @19thnews was preparing to publish a smear job on the Lincoln Project with the help of @NHJennifer,” the Lincoln Project tweeted when it shared Horn’s private messages. “You hear a lot of talk about hit-jobs in journalism, but rarely do you get to see their origin story. Enjoy.”

1. Lincoln Project tweeted out a thread that appeared to contain screenshots from their former partner @NHJennifer‘s account

These exchanges were with journalist @AmandaBecker

They have deleted the thread but here are screenshots

Horn, who left the Lincoln Project last week, tweeted Thursday evening that the Lincoln Project did not have permission to publish her private messages, raising questions about whether the group may face legal troubles. She did not immediately respond to a request for comment from the DCNF. 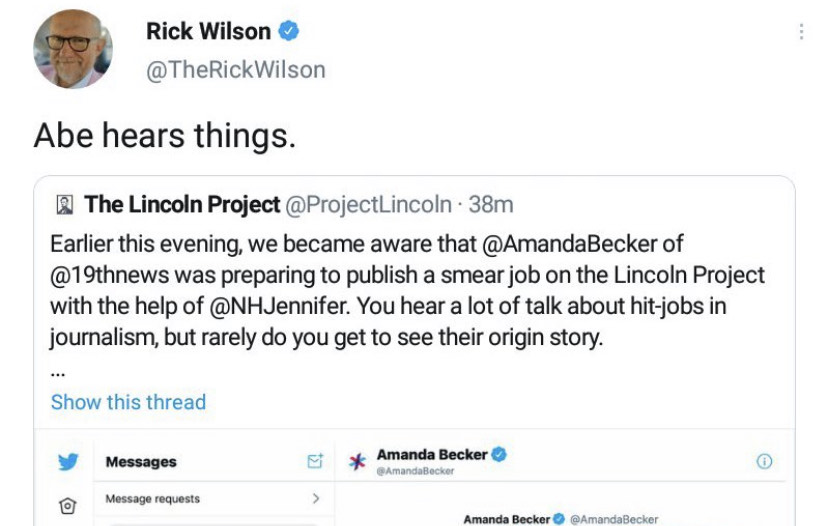 The tweets quickly sparked backlash on Twitter. Lincoln Project co-founder George Conway, who left the Lincoln Project in August 2020, warned in a Thursday evening tweet, “This looks on its face to be a violation of federal law and should be taken down immediately.”

“Horn wasn’t even the main target. The main target of the Lincoln Project tweets was @AmandaBecker, a great reporter, for the sin of trying to report out a story on the group,” Haberman added.

“Grifters are hilarious,” columnist Joe Concha tweeted as Conway insisted that “no one ever told” him about allegations against Weaver.

Men of Lincoln Project doing things without consent seems to be a pattern. https://t.co/PUKQQE5FU4

Lincoln Project members were made aware of at least 10 allegations of harassment against Weaver in June 2020, the Associated Press reported Thursday. The group did not take action against Weaver as it continued its high-profile work combatting the reelection of former President Donald Trump.

Regardless, the Lincoln Project expressed shock in January over the allegations against Weaver.

“The totality of his deceptions are beyond anything any of us could have imagined and we are absolutely shocked and sickened by it,” the group said in a January statement.

They deleted this right after George Conway tweeted this.

The Lincoln Project is on a full meltdown pic.twitter.com/EvUrADeBAb

Several weeks later, The New York Times reported that Weaver had been sending sexually provocative and unsolicited messages to young men for years. The publication talked to 21 young men who said that the messages suggested that Weaver could help them get jobs in politics.

Lincoln Project leaders have said they did not know about the allegations against Weaver until this month, though co-founder Steve Schmidt said that the organization’s leaders found from social media posts this summer that Weaver might have relationships with men, the Times reported.

Six former Lincoln Project workers asked Thursday evening to be released from their nondisclosure agreements in order to be able to talk about Weaver, the Times reported, saying in an open letter that they would like to disclose information “that would aid the press, public and our donors in answering questions relevant to the public interest.”