One of the key members of the World Health Organization (WHO) team looking into where COVID-19 originated has a lengthy history suggesting he may hold a vested interest in determining the virus did not leak from a lab – and the media is hardly talking about it.

Much reporting on the WHO’s recent visit to Wuhan has done little to characterize Dr. Peter Daszak, the sole U.S. citizen on the team, and his background. Daszak has a long financial history with the Wuhan Institute of Virology (WIV), previous reporting shows. He even organized a PR campaign in early 2020 to paint the lab leak hypothesis as a “conspiracy”, an effort that relieved both the lab and Beijing of any potential scrutiny.

WHO’s investigative team recently ended its mission and declared it unlikely that the virus originated from a lab, only to flip flop on the assertion hours later. By then, dozens of pro China headlines echoing Beijing’s talking points had already been published.

Members of the press widely covered the WHO’s findings, with publications like The New York Times declaring that “China Scores a Public Relations Win After W.H.O. Mission to Wuhan.”

NBC reported the news, too, and cited “Chinese researchers working at the lab” as among those who have dismissed the theory that the virus leaked from the lab. Business Insider wrote that the WHO experts were so sure of the lab theory post-investigation that they were able to take the “hypothesis off the table” entirely.

Other publications, like BBC News and the Associated Press, even cited Daszak in their reporting, but not his direct financial ties in the lab and its research. The AP noted that Daszak said the team “enjoyed a greater level of openness than they had anticipated, and that they were granted full access to all sites and personnel they requested.”

That level of “openness” Daszak bragged about was actually the exact opposite, we found out later. China withheld key information from the WHO team, according to the Wall Street Journal.

CNN’s Becky Anderson spoke with Daszak about the investigation, too. Over the course of about five minutes, Anderson did not ask Daszak any questions regarding his history with the Wuhan lab and his open condemnation of the lab theory from the very start of the pandemic.

The hypothesis contends that COVID-19 might have leaked from a lab in Wuhan, China. Members of the media, along with Chinese operatives on Twitter, dismissed the theory as a “baseless” conspiracy for nearly a year.

On Wednesday, just after the WHO team’s announcement pushed back on the lab leak theory, Daszak criticized the State Department and U.S. intelligence for not blindly trusting the group. State Department spokesman Ned Price said Tuesday that it won’t draw a conclusion regarding the findings until the department reviews the WHO’s report.

Daszak tweeted in response to Price’s comments and suggested people not “rely too much on US intel.” He also wrote that the White House should “TRUST” the panel first and only later “VERIFY” the information.

Let me be clear. I’m disappointed that a statement came out that might undermine the veracity of this work even before the report is released. Again – as the sole US citizen on this team, I’m happy to talk w/ White House re findings of @WHO mission. I’ll be back tomorrow.

“We have deep concerns about the way in which the early findings of the COVID-19 investigation were communicated and questions about the process used to reach them,” Sullivan said in a statement released by the White House.

Daszak’s Wednesday comments are just the latest in his effort to exclude the very real probability the virus leaked from a lab, despite the fact that he’s part of a team working to uncover the truth into how COVID-19 began. He did not respond to questions from the Daily Caller.

To start, Daszak heads up a nonprofit called EcoHealth Alliance that “has channeled money from the National Institutes of Health” to the WIV, according to a lengthy article published by New York Magazine in Jan. 2021.

The money that EcoHealth Alliance provided helped the Wuhan lab continue conducting research regarding the diseases of humans and bats, according to the NY Mag article. He also used money from another program researching “Emerging Pandemic Threats” through his nonprofit and into the Wuhan virology lab, the NY Mag article reported.

This money was mixed in with funds from the National Institutes of Health (NIH) and the U.S. Defense Threat Reduction Agency, and Daszak’s nonprofit was eventually “instructed to cease providing any funds to Wuhan Institute of Virology (WIV)” in April 2020, a few months after the global pandemic began.

Daszak pushed back on the NIH and helped get 77 Nobel Prize winners to sign a letter condemning its demands. The letter claimed that cancelling the funds would hurt the “nation and the world of highly regarded science that could help control one of the greatest health crises in modern history and those that may arise in the future.”

When the NIH later asked Daszak to get an outside inspection for the Wuhan virology lab – “as a condition of further funding,” according to NY Mag – he pushed back once again.

“I am not trained as a private detective,” Daszak declared.

Later, he openly decried FOIA efforts made by, in his words, “conspiracy-theory outlets and politically motivated organizations.”

And it isn’t just money Daszak gives to support WIV. When COVID-19 hit and the lab fell in center focus as a suspect, Daszak quickly mobilized efforts to squash the suggestion.

Daszak led in part a counter-statement published in The Lancet in February and signed by 27 scientists that “strongly condemn[ed]” the “conspiracy theories suggesting that COVID-19 does not have a natural origin.”

The letter declared that scientists “have published and analyzed genomes … and they overwhelmingly conclude that this coronavirus originated in wildlife.”

“We have a choice whether to stand up and support colleagues who are being attacked and threatened daily by conspiracy theorists or to just turn a blind eye,” Daszak told Science magazine in February.

A spokesperson for Daszak later admitted to The Wall Street Journal that Daszak’s letter was intended to protect Chinese scientists.

“The Lancet letter was written during a time in which Chinese scientists were receiving death threats and the letter was intended as a showing of support for them as they were caught between important work trying to stop an outbreak and the crush of online harassment,” Daszak’s spokesman said.

How transparent was China in welcoming WHO investigation team to Wuhan? Says @PeterDaszak, one of the scientists on the trip: “You can see from where we’ve been, we’ve been to all the key places…Every place we asked to see, everyone we wanted to meet.”https://t.co/VmTQKcBcC1

Aside from a few past reports shedding light over Daszak’s history, like an opinion piece published by the New York Post one month ago and a report from Taiwan News earlier in February, the media has otherwise ignored this member’s background regarding the lab leak theory.

Daszak’s insistence that COVID-19 could not have come from a lab follow comments he made in the past indicating that coronaviruses are, in fact, easily “manipulated.”

Daszak discussed on a podcast published in December 2019 – just weeks before the COVID-19 pandemic hit international news – how easy it is to manipulate coronaviruses in labs. Daszak explained how this method, called “gain of function” research, can help to develop various treatments and vaccines aimed at aiding future outbreaks. (RELATED: US Scientist With Close Ties To Wuhan Lab Discussed Manipulating Bat-Based Coronaviruses Just Weeks Before Outbreak)

The U.S. famously put a funding moratorium on gain of function research from 2014 to 2017 out of concerns the research itself could start the next pandemic, given the potential for lab breaches.

“Experiments that create the possibility of initiating a pandemic should be subject to a rigorous quantitative risk assessment and a search for safer alternatives before they are approved or performed,” the NIH published in 2014 in response to the moratorium. 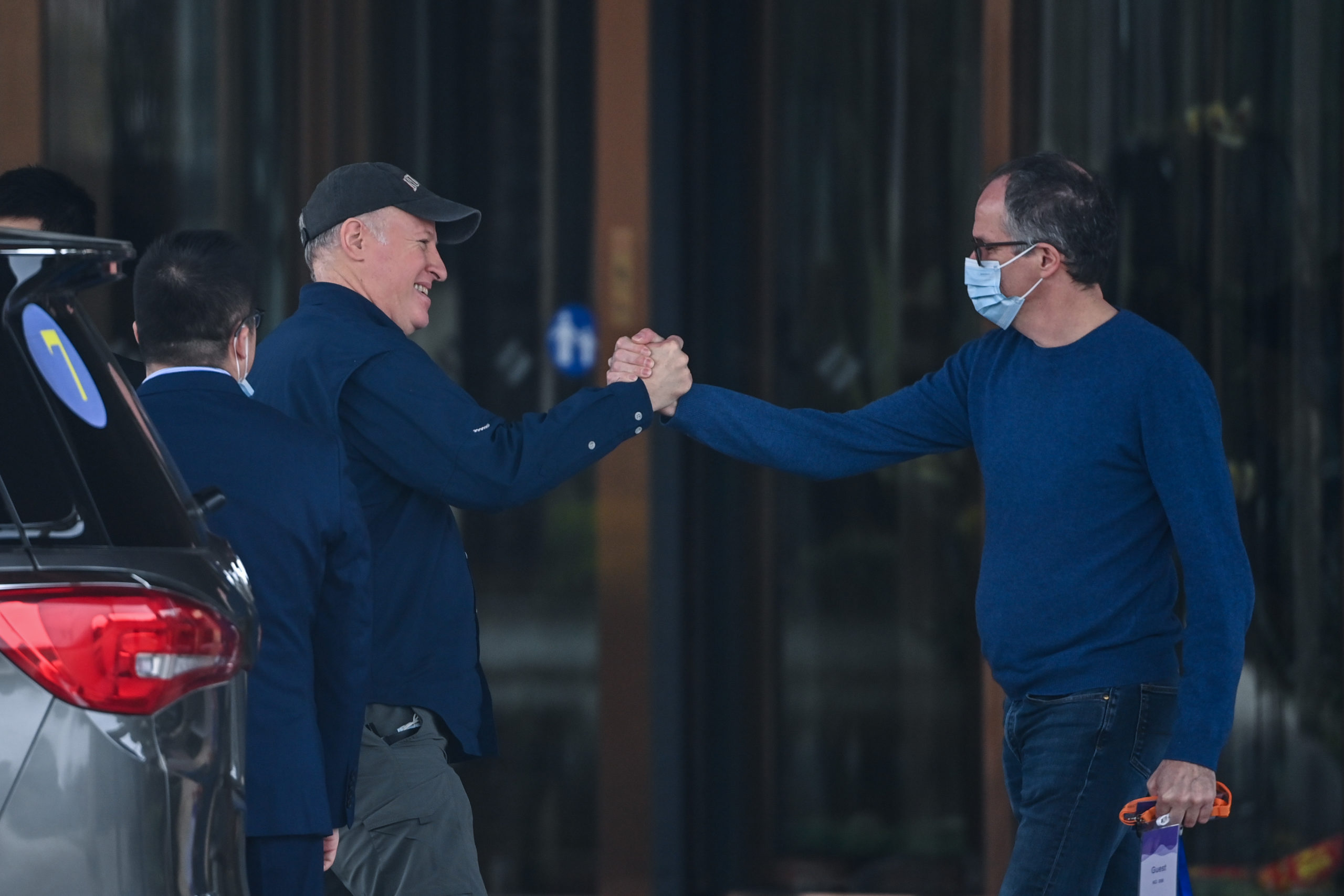 WHO team members Peter Daszak (L) and Peter Ben Embarek (R) shake hands as Daszak leaves the hotel after the World Health Organization (WHO) team wrapped up its investigation into the origins of the COVID-19 coronavirus in Wuhan in China’s central Hubei province on February 10, 2021. (HECTOR RETAMAL/AFP via Getty Images)

The lab hypothesis contends that such research conducted at a lab in Wuhan, China, accidentally escaped, prompting the global pandemic. While Daszak failed to respond to questions from the Daily Caller regarding where the bat-based coronavirus manipulations he mentioned in 2019 occurred, his past comments lend credence to the lab theory’s legitimacy.

What’s more, Daszak’s colleague Shi Zhengli of the WIV – the lab at the center of this theory – helped with a paper in February that reported the SARS-COV-2 is 96.2% identical to that of a viral strain detected from a bat in Yunnan, a Chinese province.

Shi spoke about the shock she experienced in March during a Scientific American interview upon learning COVID-19 began in Wuhan, China and not the southern part of the country. She also said she lost sleep thinking that the virus could have leaked from the lab, once again indicating the theory could hold merit.

Despite Daszak’s history battling the idea of coronavirus leaking from a lab, coupled with financial ties to the Wuhan laboratory, he somehow ended up as America’s sole representation on the WHO team.