The Lincoln Project’s donation page has been shut down amidst scandal over co-founder John Weaver’s allegedly predatory behavior with young men.

The page has been listed as inactive since Saturday, the New York Post reported, and features the message “this form is no longer available.” The Lincoln Project has not responded to several requests for comment from the Daily Caller News Foundation. (RELATED: Lincoln Project Leaders Reportedly Padded Pockets From Anti-Trump Donations While Ignoring Allegations Against Cofounder) 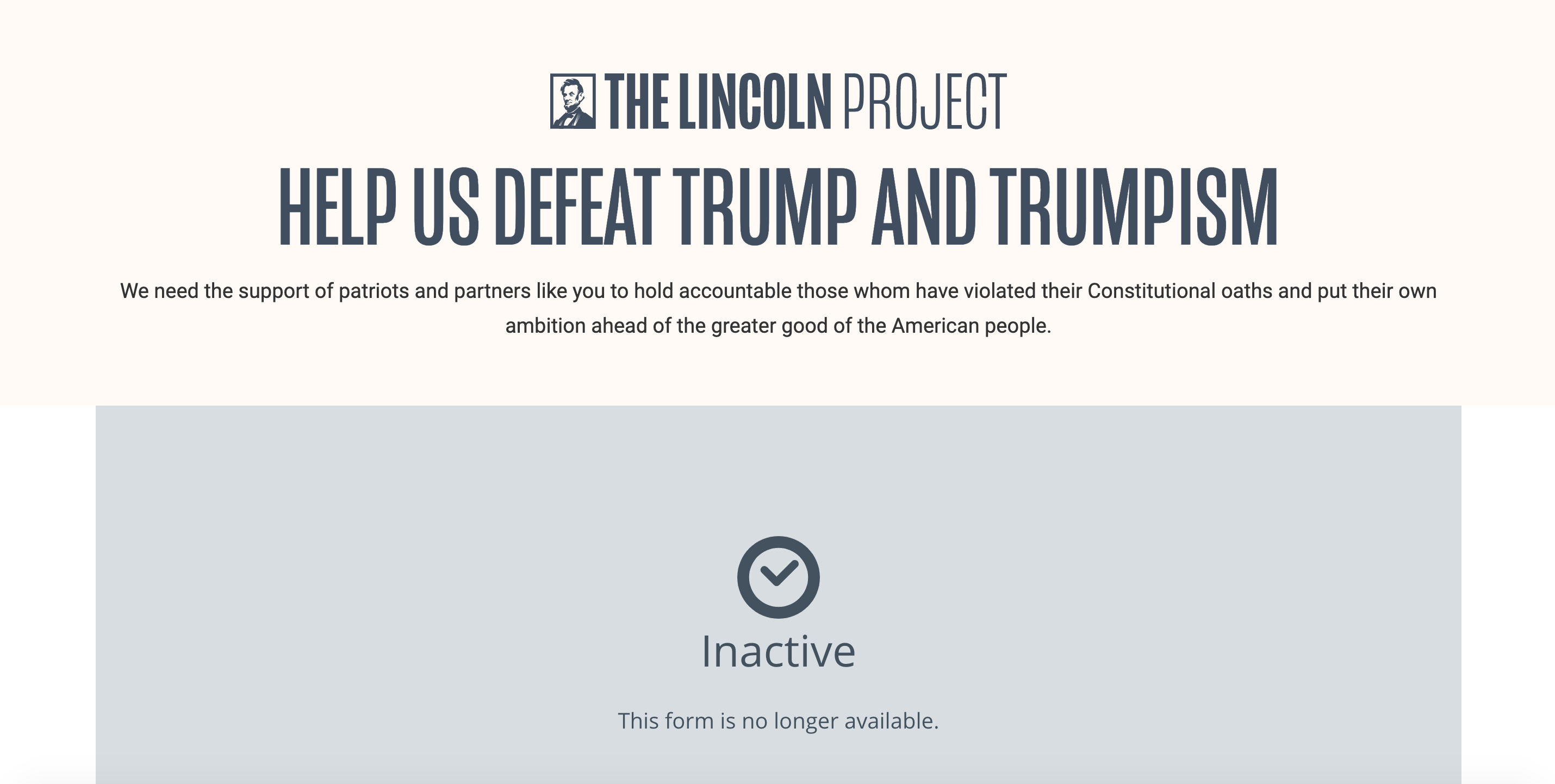 The move came after the Associated Press reported Thursday that Lincoln Project members were made aware of at least 10 allegations of harassment against Weaver in June 2020. The group did not take action against Weaver as it continued its high-profile work combating the re-election of former President Donald Trump and expressed shock in January over the allegations against its cofounder.

“The totality of his deceptions are beyond anything any of us could have imagined and we are absolutely shocked and sickened by it,” the group said in a January statement. (RELATED: Lincoln Project Scrambles To Clean Up John Weaver Mess, Publishes Former Employee’s Private Messages)

Update: The donation page is still down https://t.co/iHjCOH7QBi

The series of messaging shows Becker and Horn discussing, mostly off the record on Horn’s part, Horn’s reasons for leaving the Lincoln Project, her compensation and other Lincoln Project co-founders.

Co-founder Steve Schmidt would not confirm the email’s existence to the AP, but said if it existed, it was not shared with Lincoln Project leadership.

The AP’s sources said that the organization’s leaders discussed the allegations on multiple phone calls in June and in August, when Weaver went on medical leave.

The allegations would not gain serious media attention until January, when conservative writer Ryan Girdusky alleged Jan. 9 that multiple young men had sent him screenshots of predatory messages from Weaver. He followed up with a story in The American Conservative describing Weaver’s alleged “predatory actions” and alleged grooming of young men.

Several weeks later, the New York Times reported that Weaver sent sexually provocative and unsolicited messages to young men for years. The publication talked to 21 young men who said that the messages suggested that Weaver could help them get jobs in politics.

One of these young men was 14 when Weaver messaged him, the publication reported. (RELATED: Twitter Says ‘Bug’ Prevented Users From Searching Lincoln Project Amid Sexual Misconduct Allegations)

None of the men accused Weaver of unlawful conduct and the messages only led to one consensual sexual encounter, according to the Times. However, the men described feeling preyed upon by Weaver, an older and influential man with the potential to help them gain the job they wanted.