James Murdoch, the media executive who publicly broke with his family over their differing political views, took more than $2.2 million in personal flights on 21st Century Fox’s private jet in the last decade of his tenure at the company, more than any other executive, including his father, Rupert, financial records show.

As Murdoch was jetting around the globe, he was operating a private charity, the Quadrivium Foundation, that donated millions of dollars to climate change groups, according to the group’s financial records.

He had also begun his high-profile break from members of his family over their views on climate change. James disagreed with other family members’ conservative-leaning views on global warming and other hot-button issues, as well as the media empire’s coverage of the Trump presidency.

Murdoch stepped down from News Corp. in July, citing disagreements with the company’s editorial views. He was chief executive officer of 21st Century Fox until early 2019, when the company was sold to Disney.

In 2018, Murdoch’s last full year at the company, he booked $477,990 in flights on 21st Century Fox’s corporate jet, according to the company’s annual financial statement that year.

The expenditure is listed as perquisite under “Personal Use of Corporate Aircraft.” It is unclear how much Murdoch and other executives flew on the private jet for business purposes. (RELATED: UK Prepping Damning Phone-Hacking Report Against Murdochs)

James Murdoch’s flight costs were more than double those of his brother, Lachlan, who accrued $192,461 in expenses in 2018. Their media mogul father clocked $42,304 in private flights, according to the financial statement. 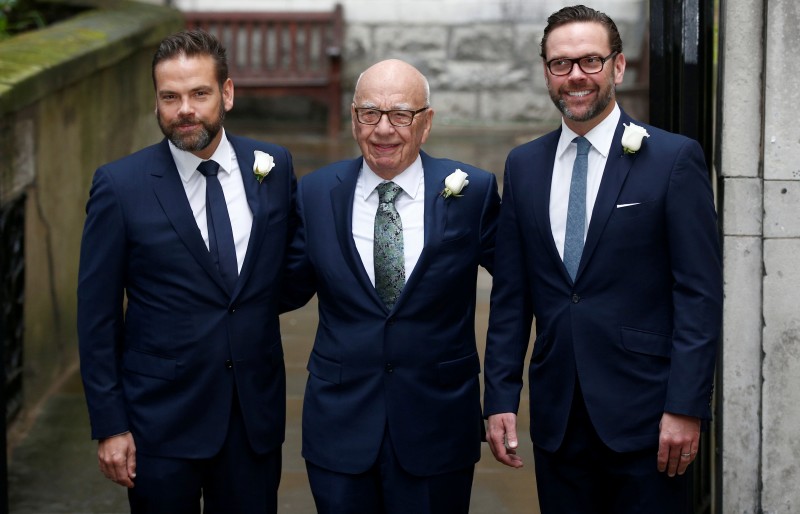 The aircraft data is listed in 21st Century Fox’s Schedule 14a statements, which companies typically release before their annual shareholders’ meetings.

James Murdoch’s second-most prolific travel year was in 2012, when he booked $304,301 in personal flights. Rupert Murdoch took $361,013 worth of flights that year, according to 21st Century Fox’s statement.

Quadrivium, which Murdoch founded in 2013 with his wife, Kathryn, has contributed $1 million annually since 2014 to the Environmental Defense Fund, according to the charity’s filings in New York.

In 2018, Quadrivium donated $1,290,000 to the anti-global warming group, and $500,000 each to the Climate Leadership Council and Climate Central Inc., two other groups fighting climate change.

James Murdoch has long been viewed as more liberal on the issue of climate change than his father and brother, who is CEO of Fox Corporation, which spun off after the sale to Disney and controls Fox broadcasting and Fox News.

In January 2020, James and his wife took their grievances public. Their spokesperson told the Daily Beast that “Kathryn and James’ views on climate are well established and their frustration with some of the News Corp and Fox coverage of the topic is also well known.”

“They are particularly disappointed with the ongoing denial among the news outlets in Australia given obvious evidence to the contrary,” the spokesperson said, referencing the wildfires that were then raging in the country.

James resigned on July 31 from the board of directors of News Corp. which controls the Murdoch empire’s print publications, including The Wall Street Journal and the New York Post.

Murdoch cited “disagreements over certain editorial content published by the Company’s news outlets and certain other strategic decisions” in his resignation statement.

While Murdoch was taking personal flights and donating to climate change charities, his nonprofit held investments in several energy companies and an energy-oriented mutual fund.

In 2016, Quadrivium purchased $315,000 in Tortoise MLP & Pipeline, a mutual fund that invests mostly in pipeline companies.

Quadrivium held the stocks in a broad equity portfolio until selling off most of its investments in 2017.

A request for comment submitted for Murdoch through Quadrivium was not returned.