The man Speaker of the House Nancy Pelosi selected to investigate security failures at the Capitol riot Jan. 6 has a history of peddling left-wing conspiracy theories, especially about the riot in question.

Pelosi announced Jan. 15 that Ret. Army Lt. Gen. Russel Honoré would lead the security review and assess any weaknesses. Honoré, who retired from the Army in 2008, has often used his Twitter account and media appearances to spread conspiracy theories about former President Donald Trump.

Pelosi’s office did not immediately respond to the Daily Caller’s request for comment.

Honoré spent the weeks following the Capitol riot peddling unfounded claims. He suggested complicity between Capitol security leaders and rioters, and between Congressional Republicans and rioters. He did not, however, seem to provide any evidence for his assertions. (RELATED: Dem Congresswoman: Other Reps Led ‘Reconnaissance’ Tours Pre-Riots)

“Once this all gets uncovered, there was complicit actions at the Capitol Police. A police chief has been fired, but now we need to look at a special investigation. Was he complicit, along with the Sergeant-at-Arms of the House and the Senate? It gives the appearance of complicity,” Honoré said on a Jan. 7 appearance on MSNBC’s “The 11th Hour” with Brian Williams.

Honoré made similar comments on a Jan. 8 episode of “The Mehdi Hasan Show.”

While Hasan did not press for evidence, he did express surprise, telling Honoré, “that’s a strong accusation.”

Capitol Police Chief Steven Sund announced his resignation on Jan. 7, the day after the Capitol riot. The House and Senate Sergeants-at-Arms, Paul Irving and Michael Stenger respectively, also resigned in the aftermath.

Honoré has also used his personal, verified Twitter account to speculate about various facets of the riot. He promoted a thread from “conspiracy analyst” Eric Garland, who suggested a connection between the suicide of Capitol Police officer Howard Liebengood and former Trump campaign officials Paul Manafort and Roger Stone. Liebengood was one of two police officers serving at the Capitol during the riot who later died by suicide. 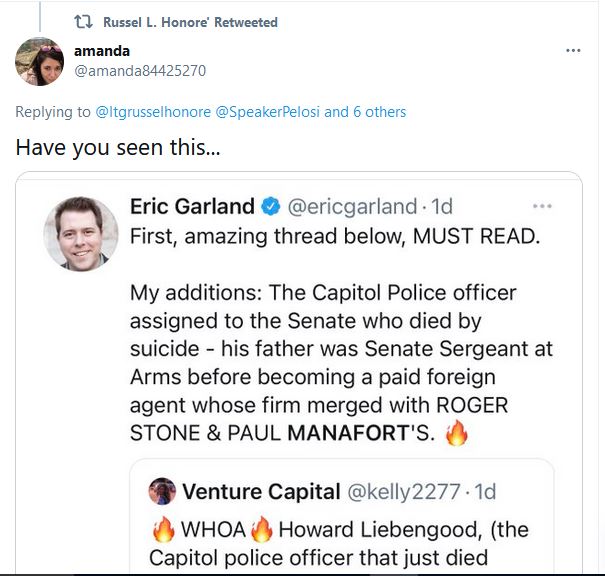 First, amazing thread below, MUST READ.

My additions: The Capitol Police officer assigned to the Senate who died by suicide – his father was Senate Sergeant at Arms before becoming a paid foreign agent whose firm merged with ROGER STONE & PAUL MANAFORT’S. ???? https://t.co/NFeZMdvzGD

There is as of yet no evidence to support a conspiracy involving Stone, Manafort and Liebengood.

Honoré retweeted another user saying that the riot “looks like an inside job,” because a woman filming went into great “detail about the floor plan.”

????Listen to the level of detail about the floor plan the woman at 0:54 is giving during the attack.

Is this someone who got one of those reconnaissance tours @RepSherrill talked about tonight? A staffer? Other employee?https://t.co/SSKtXY52VO

A letter signed by 34 House Democrats demanding an investigation into “suspicious behavior and access given” to visitors did not provide any evidence in support of those allegations. Prosecutors have not alleged that rioters received tours of the Capitol from members of Congress.

Honoré also shared an article from the left-wing site Politicus USA that endorsed the conspiracy theory that the Trump administration was engaging in “sabotage” against the United States Postal Service. Eight months before he would be appointed to investigate the Capitol riot, the retired general himself encouraged veterans to march on Washington because of Trump’s supposed “sabotage.” 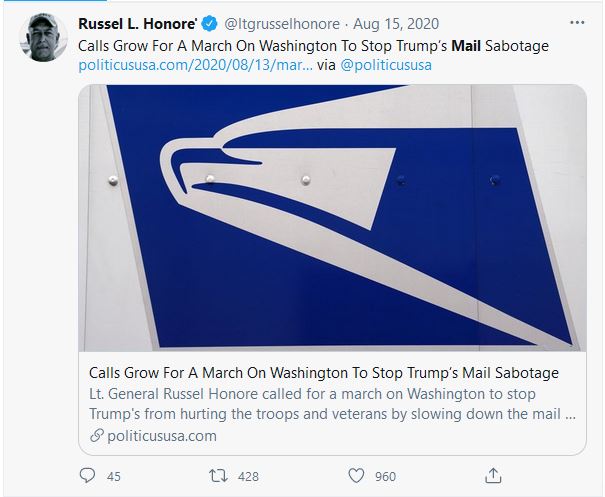 USPS did institute cost-saving measures, including reducing operating hours and eliminating overtime pay, to alleviate the Postal Service’s billions of dollars of debt. Some critics argued that Trump was attempting to prevent mail-in voting, but those claims have not been substantiated.

In another tweet, Honoré claimed that Trump took orders from Vladimir Putin and Russia. The Trump administration successfully argued at the Supreme Court that it needed to temporarily halt the 2020 Census count so that Commerce Secretary Wilbur Ross could issue a final count before the end of the year, which it was constitutionally mandated to do. In response, Honoré tweeted that “Putin told the White House to stop #Census.” 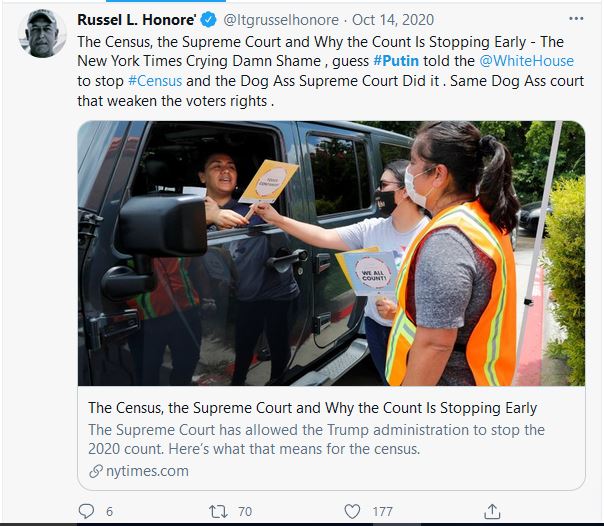 He also pushed the unfounded Russia bounty story, which claimed that Russia was paying the Taliban to kill American soldiers. General Frank McKenzie, commander of United States Central Command, said in Sept. 2020 of the allegations, “We continue to look for that evidence. I just haven’t seen it yet.” 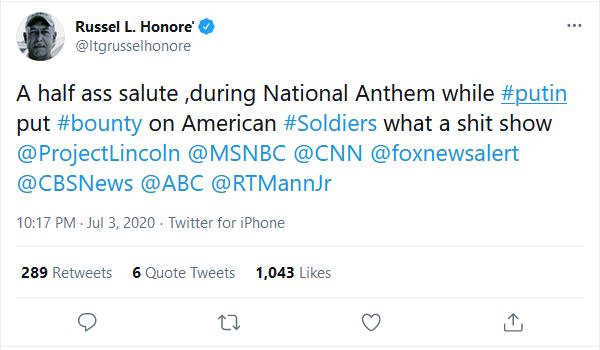 “Some of the statements that the General has made are just downright crazy,” Republican Missouri Sen. Josh Hawley told Carlson.

“General Honoré is an extreme partisan and should be the LAST person to head up an investigation of what happened at the Capitol on Jan 6th,” Wisconsin Sen. Ron Johnson added on Twitter.