A study from a liberal media watchdog group claimed Fox News promoted coronavirus misinformation an estimated 13,551 times in 2020 on weekday programs. But the list of claims is riddled with misrepresentations, flagged accurate remarks and fact checked clear statements of opinion.

Media Matters for America did not provide the methodology used to establish its estimated 13,551 figure, nor did it disclose a list of each instance of what it identified as Fox News misinformation for independent review. Despite this, New York Times columnist Nicholas Kristof promoted a Media Matters campaign to get cable providers to drop Fox News from their basic cable packages.

Ursinus College associate professor of media and communication studies Anthony Nadler told the Daily Caller News Foundation that any study on misinformation that lacks transparency in its methodology should be seen as a red flag.

“My thought is that if a study of misinformation or propaganda does not offer a detailed explanation of its methods, that should give any news organization pause before reporting its findings,” Nadler said. “There are certainly times when there are compelling reasons not to release full data (privacy concerns).”

“But something that lacks transparency in methods lacks credibility,” Nadler added.

Media Matters did not respond to multiple requests for comment asking for a full list of the estimated 13,551 instances of Fox News coronavirus misinformation it flagged and the methodology used to come up with the figure.

Media Matters did publish a companion piece to its study that listed around 1,000 instances of what it called the “broader extent of Fox’s lies, propaganda, conspiracy theories, bigotry and misinformation” in 2020.

The list did flag legitimate instances of misinformation from Fox News, but much of what Media Matters characterized as Fox News misinformation can be more accurately described as opinion, and the list contained many blatant misrepresentations of what actually transpired.

For example, Media Matters falsely accused Fox News medical contributor Marc Siegel of spreading coronavirus misinformation on March 12, 2020, when he made a “brief mention of chloroquine as a potential treatment for COVID-19.”

What Media Matters flagged as misinformation was in fact Siegel accurately reporting that South Korea was at the time testing chloroquine, remdesivir and Plaquenil, a brand name for hydroxychloroquine, as potential treatments for coronavirus.

Media Matters also flagged Fox News host Sean Hannity for misinformation for displaying a graphic that accurately indicated that there were zero coronavirus deaths in the United States on Feb. 27, 2020, as misinformation. The first confirmed U.S. coronavirus death came two days later on Feb. 29, according to the Centers for Disease Control and Prevention. 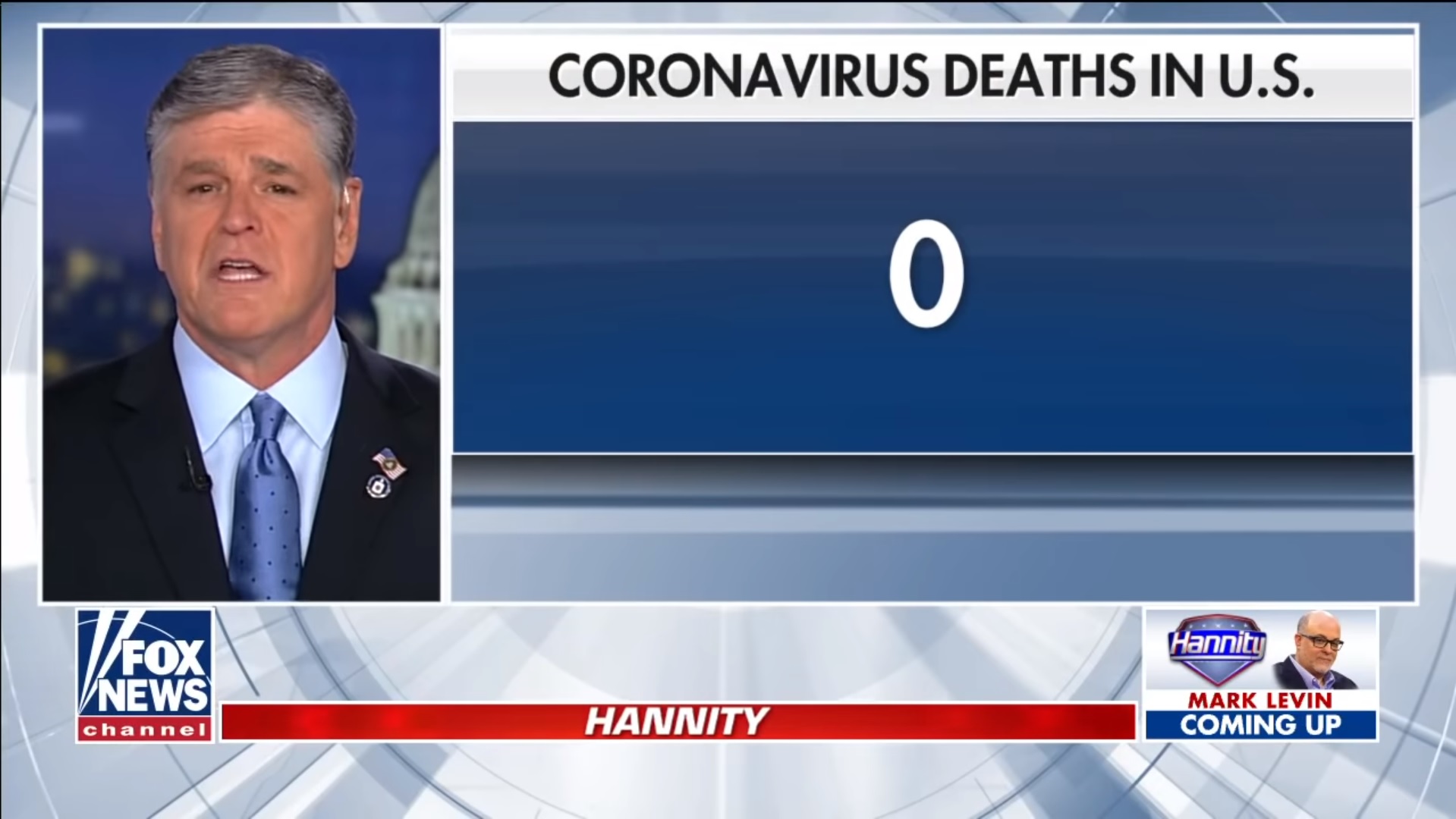 Media Matters accused Sean Hannity of spreading misinformation when he accurately reported that there were zero known COVID-19 deaths in the United States on Feb. 27, 2020. (Screenshot/YouTube)

Media Matters falsely accused Siegel of attacking the World Health Organization for warning about coronavirus during a March 6, 2020, segment on Fox News.

In reality, Siegel was criticizing the WHO’s initial projected coronavirus death rate of 3.4% during the segment, calling the organization a “bunch of alarmists” and “saber rattlers” for promoting the projection while South Korea was reporting a 0.7% COVID-19 fatality rate.

Siegel’s criticism of the WHO’s projected coronavirus death rate in March proved to be on point. Top WHO epidemiologist on COVID-19, Maria Van Kerkhove, said during a press conference in August that several studies pinned the COVID-19 fatality rate at 0.6%.

And Media Matters falsely accused Fox News host Sandra Smith of “covering” for Minnesota police on May 29 following the arrest of CNN reporter Omar Jimenez and his camera crew. What Media Matters said was misinformation was in fact Smith accurately reporting that the police claimed Jimenez was asked to move and refused, that CNN denied the police’s claim and that Minnesota Gov. Tim Walz called the arrest “unacceptable.”

Media Matters also accused Fox Corporation CEO Lachlan Murdoch of spreading misinformation for issuing a letter in June saying in a letter that Fox “embraces and fosters diversity and inclusion.”

Examples of opinions that Media Matters flagged as Fox News misinformation include:

Media Matters did, however, identify some examples of actual misinformation, such as when host Laura Ingraham said on Dec. 14 that COVID-19 is “less lethal than the flu.” World Health Organization epidemiologist Maria Van Kerkhove said in August that studies pin the virus’s mortality rate at 0.6%, which is six times the rate of the seasonal flu’s 0.1% mortality rate.

The group also flagged legitimate instances of election-related misinformation on Fox News, such as the network’s multiple interviews with pro-Trump attorney Sidney Powell, who used her time on the air to push the conspiracy that the 2020 election was stolen from President Donald Trump.

Media Matters did not provide a full list of the 253 instances of supposed Fox News coronavirus misinformation from that five-day period. It did, however, disclose its methodology for the study, showing that it counted any statement that “valued the economy over public health” or that “pushed to reopen the economy or schools” as misinformation.

Media Matters did not respond to multiple requests for comment asking whether it would flag New York Gov. Andrew Cuomo’s comments during a press conference Friday that “schools must reopen” five days a week amid the pandemic as misinformation.

It’s also unclear whether Media Matters considers a February comment from Centers for Disease Control and Prevention Director Rochelle Walensky that vaccinating teachers was not a prerequisite for reopening schools as an instance of coronavirus misinformation.