Stefan Halper, a former Cambridge professor who snooped on the Trump campaign for the FBI, told investigators that he witnessed Michael Flynn leave a 2014 event at the British university with a Russian graduate student, a claim that an FBI agent later deemed likely to be false.

The bombshell revelation is contained in a declassified summary of Halper’s meeting with FBI agents in mid-August 2016, shortly after he agreed to serve as a confidential human source (CHS) for the bureau in its investigation into the Trump campaign’s possible ties to Russia.

The FBI document, which President Donald Trump ordered declassified at the end of his term, was published by Just the News on Thursday.

The source for the allegation about Flynn and Svetlana Lokhova, the Russian student, had been a longstanding mystery.

The claim first popped up in news reports from The Wall Street Journal and The Guardian in March 2017. The innuendo-laden stories said that U.S. and British intelligence officers had suspicions about Flynn’s interactions with Lokhova during his visit to the University of Cambridge in February 2014, when he served as director of the Defense Intelligence Agency.

Lokhova, who studied Soviet-era history at Cambridge, has emphatically denied having any improper contact with Flynn, or leaving with him from the Cambridge event. She has told The Daily Caller News Foundation that she left the event with her husband, David North. North has also told the DCNF that he picked Lokhova up from the event.

Lokhova has waged a legal battle to find out how the rumor about she and Flynn made its way to press. She has sued The Wall Street Journal and Halper to get to the bottom of the story.

In a statement to The Daily Caller News Foundation, Lokhova accused the FBI of “a cover up” by withholding the Halper memos.

“These documents should have been released four years ago,” Lokhova said in a phone interview.

Lokhova also said that the documents confirmed her suspicions that Halper, who she referred to as “this man who lied about me,” was the source who provided dirt about her to the FBI.

She said that the FBI, members of Congress and journalists knew the truth about Halper’s allegations, but “sat on this and concealed it from the public.”

Details from the newly declassified document match up with those found in a memo that FBI special agent William Barnett wrote on Jan. 4, 2017, as part of Crossfire Hurricane, the code name for the investigation of the Trump campaign. 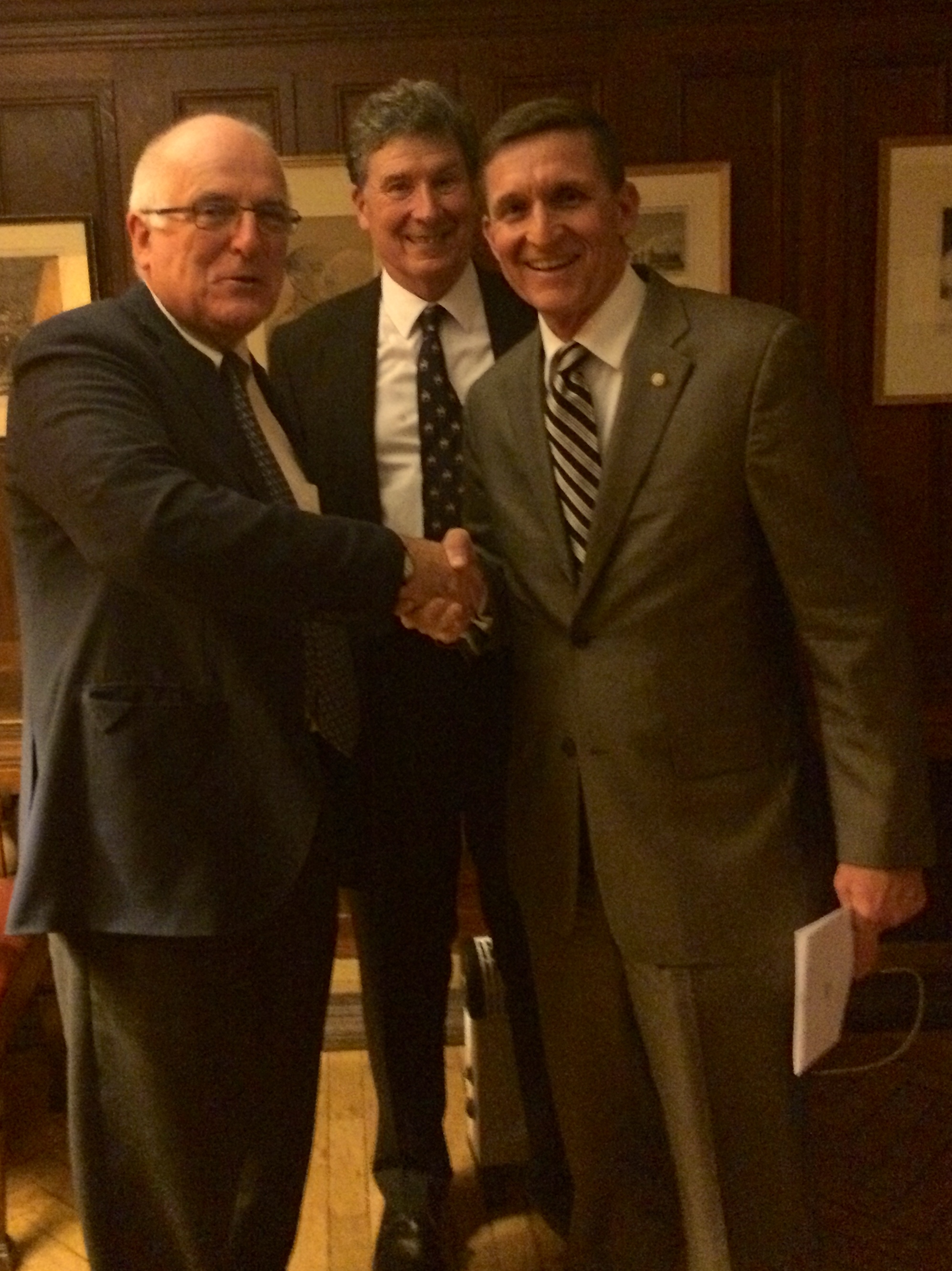 Barnett, who was the lead agent in the investigation of Flynn, wrote in the memo that a CHS had told the FBI about Flynn’s alleged encounter with a “suspicious” person during an overseas trip. Flynn allegedly got into a cab with the person. The memo did not identify the CHS who provided the information to investigators.

Barnett wrote that the FBI investigated the lead by checking travel records and asking around about Flynn and his alleged sidekick. He told federal prosecutors in September 2020 that he believed the tip was probably false.

“BARNETT found the idea FLYNN could leave an event, either by himself or [redacted] without the matter being noted as not plausible,” reads a summary of Barnett’s interview with U.S. attorney Jeff Jensen on Sept. 17. “With nothing to corroborate the story, BARNETT thought the information was not accurate.”

The memo published on Thursday fills in many of the gaps left open in the Barnett memo, including by identifying Lokhova by name.

The memo says that Halper relayed an incident he witnessed when Flynn spoke at an event while he still served in the intelligence community.

Halper at the time taught at Cambridge, where he organized the Cambridge Intelligence Seminar, an event that brings together intelligence operatives to talk about their trade. Halper co-founded the seminar with former MI6 director Richard Dearlove, and Christopher Andrew, a Cambridge professor who served as Lokhova’s mentor.

Dearlove, Andrew, Lokhova and around a dozen Cambridge students have been verified to have attended the event with Flynn. It is unclear if Halper actually attended the event. Lokhova has disputed that he was in attendance.

Halper told his FBI handler, counterintelligence agent Stephen Somma, that after Flynn spoke at the event and socialized over dinner and drinks, he left in a cab to go to the train station.

“The CHS stated that a woman, SVETLANA LOKHOVA, surprised everyone and got into CR’s cab and joined CR on the train ride to London,” the memo says.

CR stands for “Crossfire Razor,” the code name given to Flynn.

“The CHS recalled that LOKHOVA ‘latched’ onto CR when he was at the [redacted]. The CHS stated that s/he is somewhat suspicious of LOKHOVA, as she has been affiliated with several prominent members of [redacted].” 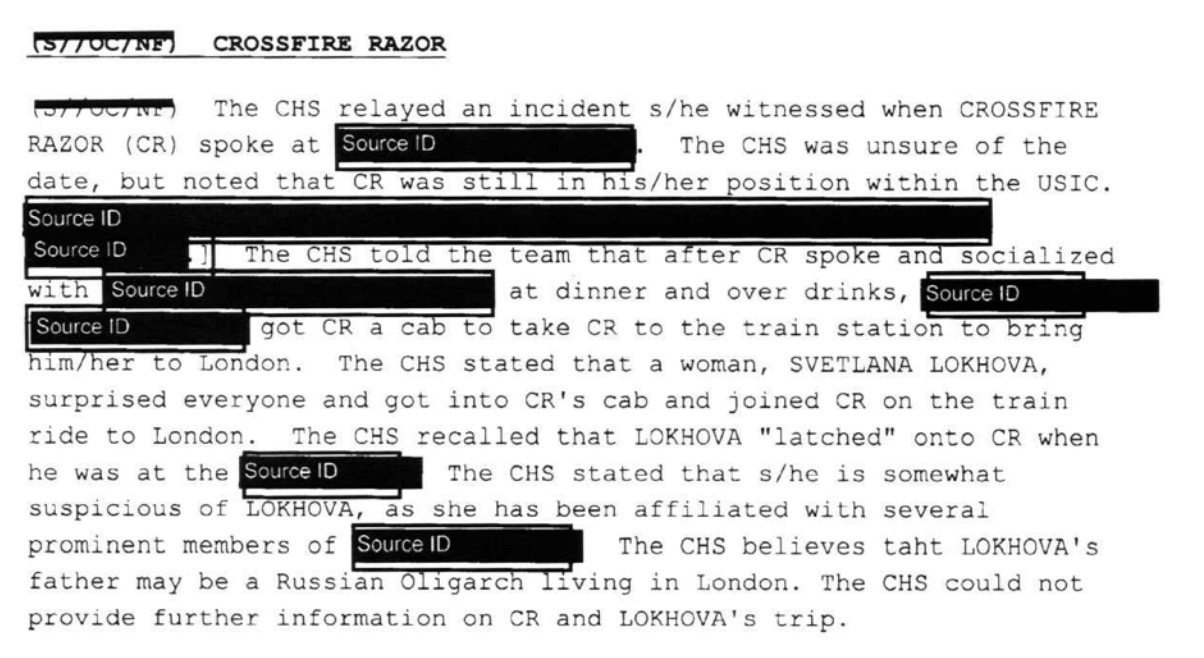 Passage from a declassified FBI memo regarding Stefan Halper

Flynn, who served as President Trump’s first national security adviser, has also adamantly denied the allegations about his Cambridge visit.

He called the allegation “ridiculous” during an interview with the special counsel’s team on Nov. 29, 2017, days before he entered a plea agreement with prosecutors.

Flynn told investigators that he walked back to his hotel alone after the Cambridge event, and never saw Lokhova again.

Lokhova has raised other concerns about Halper.

She has provided the DCNF with emails showing that Halper invited her to a small private dinner at his home in Cambridge in February 2016. Lokhova has said she found the invitation peculiar because she rarely interacted with Halper during their time at Cambridge. She also had the suspicion that he did not like her. (RELATED: Svetlana Lokhova Reflects On Interactions With ‘Spygate’ Figure)

Lokhova has said that she now wonders whether the dinner invitation was an attempt to spy on her.

As part of the Crossfire Hurricane investigation, the FBI tasked Halper to meet with and record Carter Page on several occasions, in hopes of finding out whether he had any insight into links between the Trump campaign and Russian government.

Halper also met with George Papadopoulos in London in September 2016, using an academic research project as cover. Halper flew Papadopoulos to London for the meeting and paid him $3,000 for a research paper on energy issues in the Middle East. During two dinner meetings on the trip, Halper plied Papadopoulos with questions about Russia and the Trump campaign.

Neither Page nor Papadopoulos provided incriminating information to Halper. A Justice Department inspector general’s report released in December 2019 said that the FBI withheld exculpatory information that the two Trump aides shared during their meetings with the FBI source.