Senate Minority Leader Mitch McConnell fired back at former President Donald Trump for taking credit for his re-election in 2020, reminding people that he was down 15 points in 2014 when he won without Trump’s help.

McConnell was asked about Trump’s Sunday remarks at CPAC, where he said his endorsement of McConnell brought him back from down 20 points to a victory. McConnell, who voted to acquit Trump in his second impeachment trial, pushed back against the claims Tuesday, citing his last election prior to 2o2o.

The Senate Republican leader was asked about Trump’s speech. A reporter said Trump “took a lot of credit for your re-election.” McConnell smiled in response, saying: “I want to thank him for the 15-point margin I had in 2014 as well.” 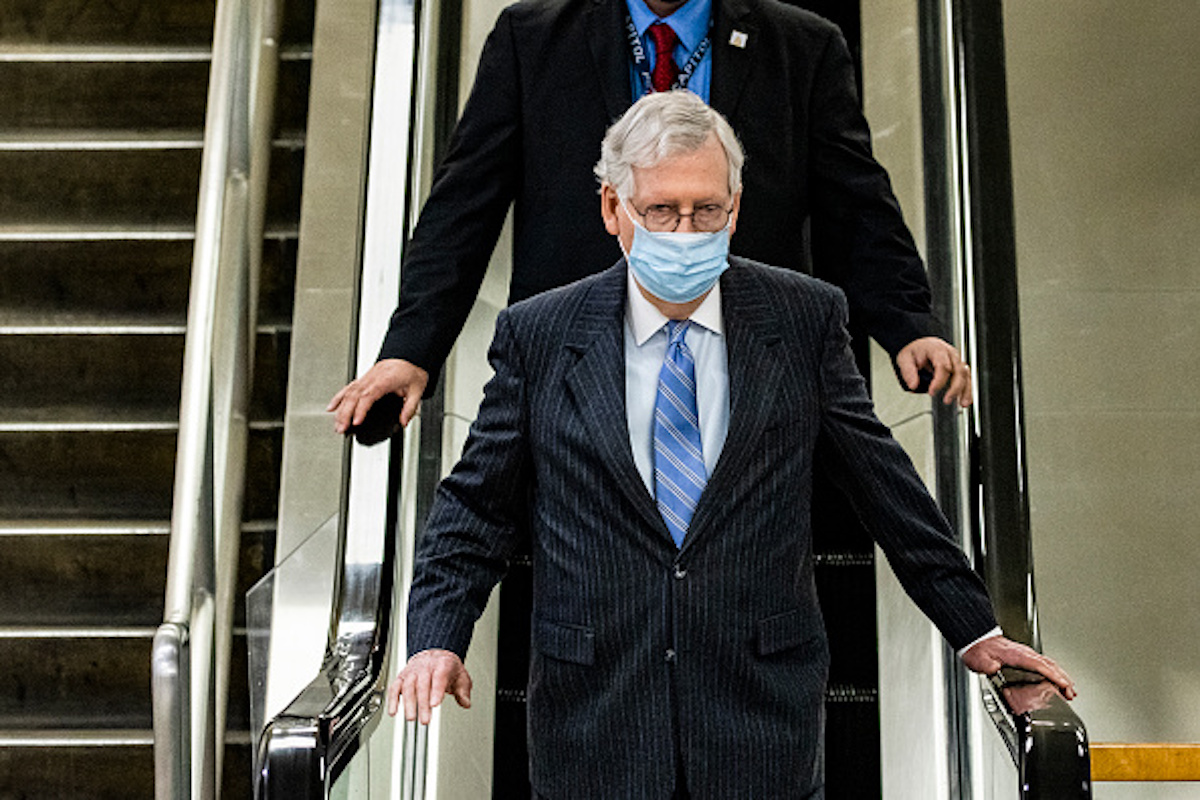 Senate Minority Leader Mitch McConnell (R-KY) gets off the escalator in the Senate subway on March 2, 2021 in Washington, DC. (Photo by Samuel Corum/Getty Images)

“My endorsement of Mitch McConnell at his request, he asked for my endorsement,” Trump said during his CPAC speech. “Brought him from one point down to 20 points up and he won his race in the great state and the great commonwealth of Kentucky. He won it very easily. And I said, ‘I wonder if I’m doing the right thing here,’ but you know what, I did what I did.”

“But he went from one point down to 20 points up very quickly, immediately actually, and he won his race. If you compare that to his other elections, I’m sure you’ll see something interesting. But you know what, we got a Republican elected,” Trump added.

“They are now at each other’s throat,” Graham told Fox News host Sean Hannity Tuesday night. “I am more worried about 2022 than I’ve ever been. President Trump is the most consequential Republican in the party. If Mitch McConnell doesn’t understand that, he is missing a lot. But my beef is not with Mitch McConnell, because he has the same policy views I do. My beef is that we need to knock this off.” (RELATED: ‘It Will Only Get Worse’: Trump Statement Rips Into Mitch McConnell)

In late January, McConnell said that he hadn’t spoken to Trump since Dec. 15, as some reported that McConnell has said he does not want to speak to Trump again after the Jan. 6 Capitol riot. However, McConnell still voted to acquit Trump in his Senate impeachment trial despite their differences.