The White House is using the teleconference platform Zoom for unclassified government meetings, but lawmakers and experts warn the Biden administration is ignoring the national security risks of partnering with a platform linked to China’s government.

Republican Indiana Rep. Jim Banks, chairman of the House Republican Study Committee, recently sent a letter to White House chief of staff Ron Klain asking the administration to disclose what government meetings were being held on Zoom and whether any classified information was included in those meetings.

“Why is Zoom being used, rather than alternatives, given the history of Zoom meetings being infiltrated by agents of the Chinese Communist Party?” Banks asked in the letter, which was obtained by The Washington Post.

Zoom has been in the Justice Department’s crosshairs since December 2020 after authorities charged China-based Zoom employee Xinjiang Jin for spying on U.S. video conference calls at the behest of China’s intelligence services. Jin had close contact with Zoom executives and disrupted meetings held to commemorate the June 4, 1989 Tiananmen Square massacre.

#ICYMI: The #FBI announced that Xinjiang Jin is wanted for allegedly conspiring to use a U.S. technology company’s systems to censor the political and religious speech of U.S.-based individuals at the behest of the Chinese government. #WantedWednesday https://t.co/2NXaaGaa1M pic.twitter.com/bYn0rXzH1j

“No company with significant business interests in China is immune from the coercive power of the Chinese Communist Party,” said assistant attorney general John Demers — a career official who remains on the case — when announcing the allegations.

Zoom said in a statement responding to the Justice Department that a number of measures had been put in place to protect Americans’ data. These included stronger encryption and geo-fencing procedures ensuring American data was not routed through Zoom’s data center in China.

Senior Biden administration officials told The Washington Post the White House uses Zoom for Government, a more secure variant of the platform with oversight from the Homeland Security Department and FedRAMP.

According to its website, Zoom for Government “operates in a dedicated, secure infrastructure” that meets federal cybersecurity standards and stores all user information in continental U.S. data centers.

But tech experts are concerned Zoom will continue to pose a security risk as long as it has a data center in China. The research group Citizen Lab concluded in an April 2020 report the platform has three Chinese subsidiaries and at least 700 software workers in China. (RELATED: Beijing Targets Biden Team With ‘Malign’ Foreign Influence Campaign, Top Intel Official Says) 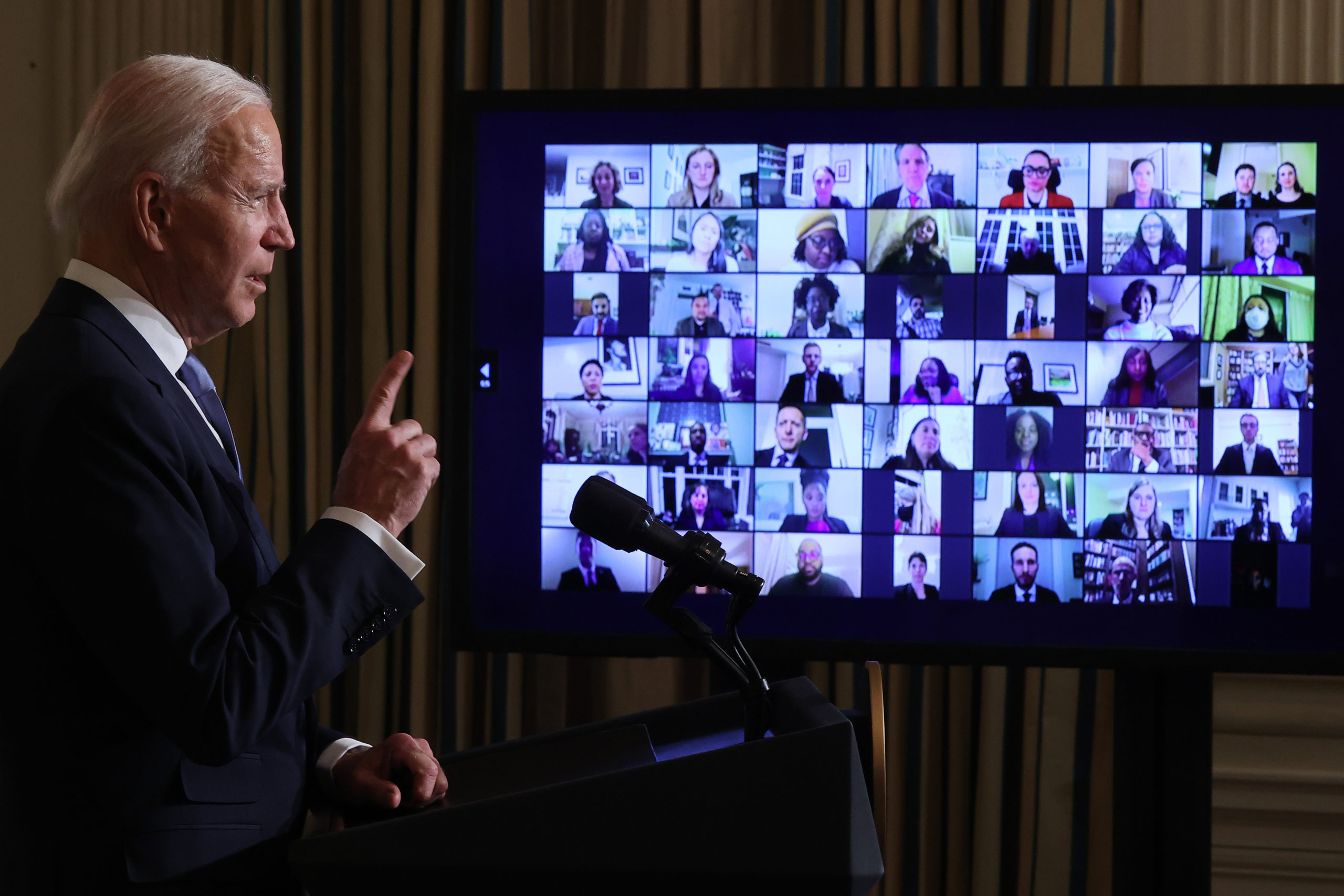 President Joe Biden conducts a virtual swearing in ceremony via Zoom at the White House on Jan. 20, 2021 (Chip Somodevilla/Getty Images)

“There’s good reason to believe Zoom has made significant strides in their cybersecurity and that for normal Americans’ use, it’s probably fine,” American Enterprise Institute resident fellow Klon Kitchen told The Washington Post. “But if you are the White House, you have a higher cybersecurity bar that you need to get over and there’s just no reason to assume that risk.”

The Trump administration had reportedly used Zoom as well, but one senior official told The Washington Post many officials were cautious about using the platform and national security officials in particular avoided using Zoom altogether.

A spokesperson for Zoom reiterated in a statement to the Daily Caller that the White House uses Zoom for Government and not its commercial use platform.

“As the Washington Post column notes, we serve the U.S. Government through Zoom for Government, and all communications on that platform reside exclusively in continental U.S. data centers that are managed solely by U.S.-based, U.S. persons,” the spokesperson said. “Zoom for Government is authorized by FedRAMP, a government-wide program that provides a standardized approach to security assessment, authorization, and continuous monitoring for all cloud products and services.”