Some black parents in Los Angeles are organizing a school reopening rally after a teachers union president claimed that white, wealthy parents were behind the push to reopen, Fox 11 reported.

“No one can speak for us better than us,” Renee Bailey, a parent with children enrolled in the Los Angeles Unified School District (LAUSD), told Fox 11. Bailey has a 5-year-old child and a 14-year-old son with an intellectual disability who she says has “regressed” due to school closings.

TONIGHT: Some black parents in South LA are outraged after hearing UTLA’s president say that wealthy parents are behind push to reopen LA schools, & that reopening now is racist. They tell me she does not speak for them & they’re holding a reopening rally on Sat. in Watts @FOXLA pic.twitter.com/zdNeNYve0N

“He has the intellect of a three or four year old,” Bailey told Fox 11. “He needs schools for the therapies. The fact that he’s going on two years without his therapies, my son has regressed.”

Bailey told Fox 11 that she was outraged after United Teachers Los Angeles President Cecily Myart-Cruz claimed that white, wealthy parents were the ones “driving the push behind a rushed return.” Myart-Cruz’s comment was made after California finalized a reopening plan that would offer $2 billion in financial incentives for schools to open before April 1. Myart-Cruz claimed that the plan would only go to “white and wealthier schools that do not have the transmission rates that low-income black and brown communities do.”

“This is a recipe for propagating structural racism,” Myart-Cruz added.

Bailey told Fox 11 that the comments were “horrible,” especially since an education leader made them, and that Myart-Cruz generalized black people.

Lamar Freeman, a youth football coach in South Los Angeles, said all parents he talks to want their children back in school, and that Myart-Cruz’s comments sounded more like “excuses.”

Lamar Freeman has been a coach of LA Rampage, a youth football team in Watts, since 2011. He says every parent he talks to wants their kids back in school & UTLA’s comments “sounded like an excuse”. He says prior to Zoom learning, his team had 80% honor roll rate. Now 20% @FOXLA pic.twitter.com/sZo80wpSW1

“Our parents are dramatically upset that their kids are not in school, they want their kids in school. They want face-to-face learning. They’re kids, they need some kind of structure,” he told Fox 11.

Freeman said he noticed high-achieving students were beginning to fail classes after learning went virtual. Before the pandemic, 80% of the students he coaches were on the honor roll, but that number slipped to 20%.

“They struggle because most of [their] parents are single parents, so they have to work in the morning. There’s no one to supervise their kid to make sure they’re signing on Zoom,” he told Fox 11.

Bailey told Fox 11 that black parents have the “ability to speak for ourselves” and that it’s minority families that want schools to reopen the most.

“It’s almost like minority families want the schools to reopen more than anyone else, and the reason why I say that is education, for us, our culture, is a stairway out of poverty, so every day that our kids aren’t in school, that’s just a day closer to poverty for them,” Bailey said.

UTLA told Fox 11 that Pew Research polling backs their statement that white, wealthy parents were behind the push to reopen schools.

We reached out to UTLA for their response to the blowback from their president’s comments. They tell us that Pew Research polling supports her statement that white, wealthy parents are primarily behind school reopening pressure. Full story 10pm @FOXLA pic.twitter.com/oOfaczQzeU

The “Open Our Schools” rally is scheduled for March 13 at Ted Watkins Park at 11 a.m, according to a flyer. “Our children are severely falling behind and suffering mental health issues,” the flyer reads. “Our kids miss and need their teachers, education and friends.”

LAUSD is the second largest school district in the country, with nearly 600,00 students. UTLA has allegedly been trying to collect information on parents speaking to media in favor of reopening schools. An email obtained by the Daily Caller appeared to show a UTLA “research specialist” asking a district parent whose name appeared in the Los Angeles Times what their race is as part of a “research project.” (RELATED: Teachers Union Allegedly Sends Emails To Racially Profile Los Angeles Parents Speaking To Media In Favor Of School Reopening)

“I know that [redacted last name] is a common Iranian name, but I will not make any assumptions without a legitimate method,” the email said. “Could you tell me how you racially self-identify or point me to a citation on your identity?” 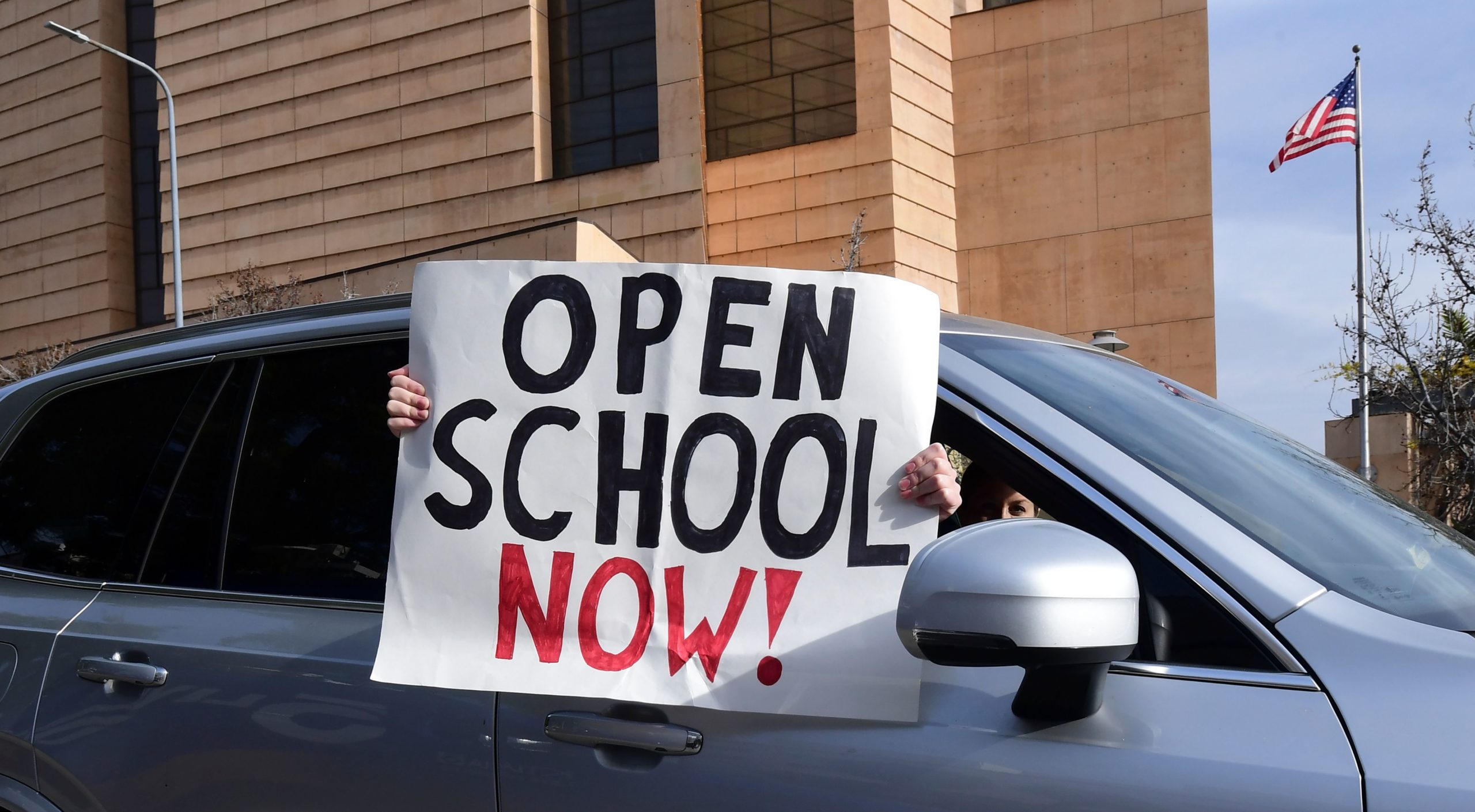 Signs calling for schools to reopen are displayed by people in passing vehicles during an “Open Schools Now” rally via car caravan by supporters of The Students First Coalition of Los Angeles on February 15, 2021 in Los Angeles, California. (Photo by FREDERIC J. BROWN/AFP via Getty Images)

Numerous other teachers unions and school officials have claimed that the push to reopen schools is influenced by white supremacy. A board member La Mesa-Spring Valley Schools in San Diego claimed that reopening schools for in-person instruction was “white supremacist ideology” and told fellow board members to check their privilege when they discussed potential reopening dates.

The Chicago Teachers Union blamed the push to reopen schools on “sexism, racism, and misogyny” in a tweet that was later deleted in December.