The Feb. 19 email, obtained by the Daily Caller’s Jorge Ventura, is entitled as a “research project,” and appears to be sent from an official United Teachers Los Angeles (UTLA) email address. The “research specialist” said that they are compiling data on race and class based on who speaks about Los Angeles Unified School District (LAUSD) issues in the Los Angeles Times.

Check out this email by @UTLAnow to a parent, they are conducting research on parents who speak to media in favor of school reopenings, profiling their race and class.
Who is funding this? If other parents have received this please contact me pic.twitter.com/mAKGUIhCl1 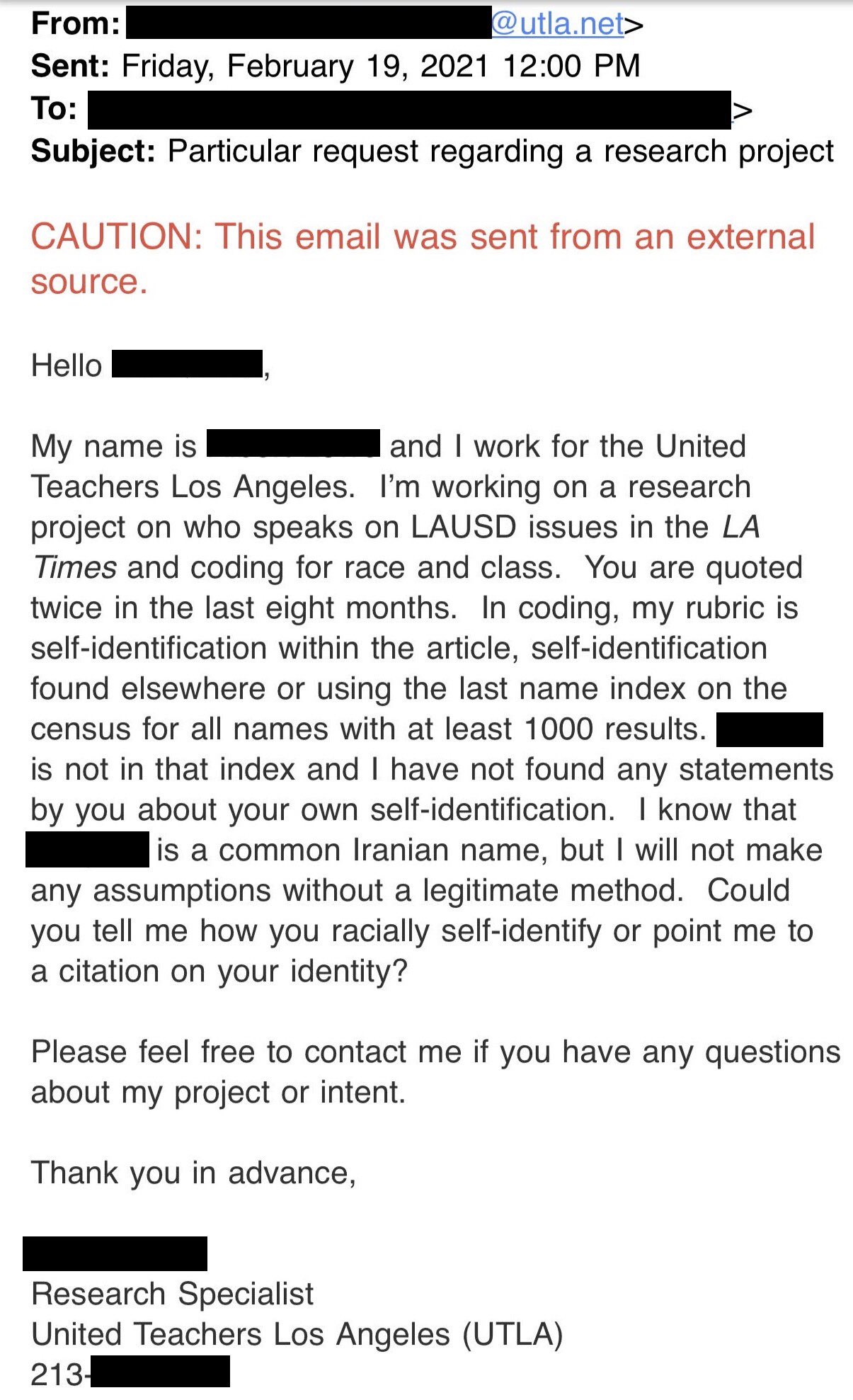 “You are quoted twice in the last eight months,” the email said. The “research specialist” then described the method used to code race based on information provided in the news article that quotes individuals speaking about the school district.

The “research specialist” then surmises that the individual’s last name is Iranian.

“I know that [redacted last name] is a common Iranian name, but I will not make any assumptions without a legitimate method. Could you tell me how you racially self-identify or point me to a citation on your identity?”

A research director from UTLA followed up a week later and left a message apologizing to the parent, offering to explain in further detail during a phone call, the voicemail, obtained by the Caller’s Jorge Ventura, said.

LAUSD is the second largest school district in the country, with nearly 600,000 students. The UTLA rebuked California’s latest school reopening plan, which includes providing $2 billion in financial incentives to schools that open before April 1, Politico reported Tuesday. The UTLA said the plan was a “recipe for propagating structural racism.”

“We are being unfairly targeted by people who are not experiencing this disease in the same ways as students and families are in our communities. If this was a rich person’s disease, we would’ve seen a very different response. We would not have the high rates of infections and deaths,” UTLA President Cecily Myart-Cruz said Monday, according to Politico. (RELATED: Chicago Teachers Union Walks Back Statement Blaming ‘Sexism, Racism And Misogyny’ For Fueling Push To Reopen Schools)

Myart-Cruz has also reportedly claimed that white, wealthy parents are behind the push to reopen schools, prompting some black parents in South Los Angeles to plan a rally to call for classrooms to reopen, FOX Los Angeles reported.

UTLA did not respond to a request for comment in time for publication.